The windmill decorating the triangular grassy park at the intersection of Halsey Lane with Montauk Highway is known as the Windmill at Water Mill. The windmill was built in 1800 in North Haven for grinding grain and was moved to this location in 1813 by a team of oxen after the mill was sold. It was used as a gristmill until 1887. An inscription was found in 1977 inside on stairs that read "Began to Grinde Aug. 1 1800." It is a smock mill, a type of windmill with six or eight sloping sides, topped by a cap or roof that rotates to bring the sails into the wind (named for its resemblance to smocks worn by early farmers). The Windmill at Water Mill was listed in the New York Register in 1980 and the National Register in 1978. It is the only remaining windmill on Long Island whose cap is rotated by an external tailpole. 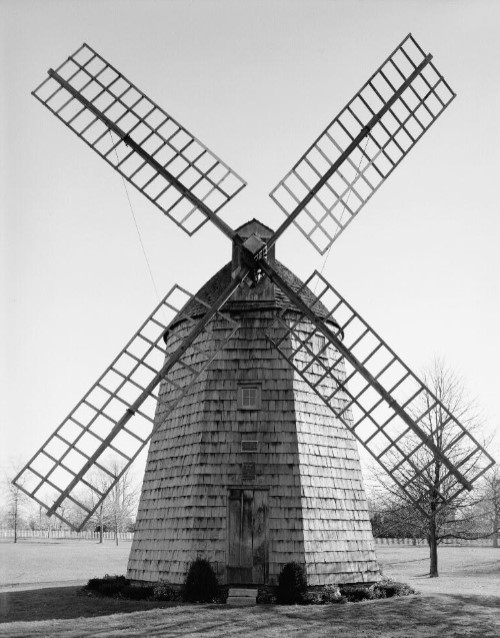 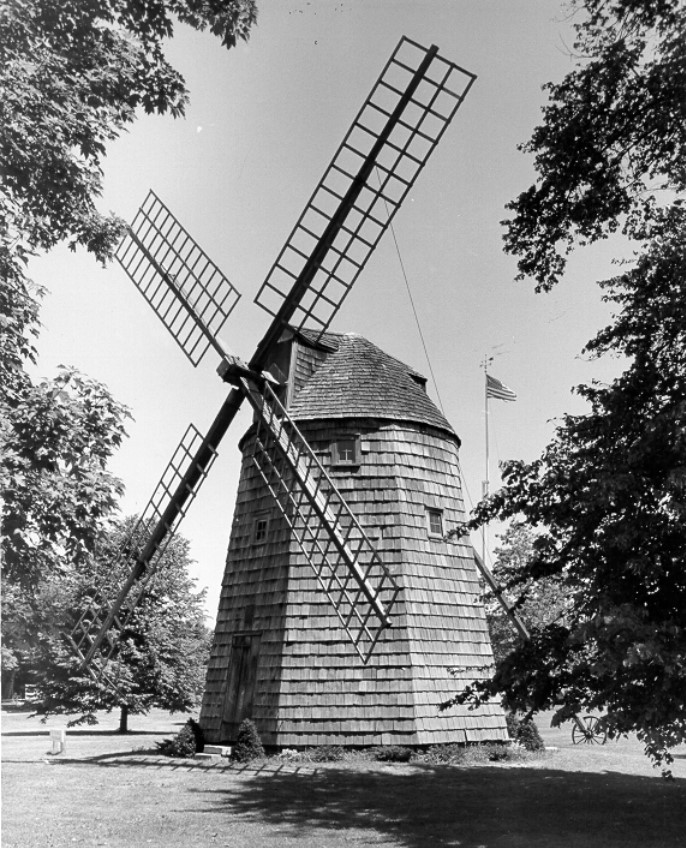 Tailpole of the Windmill at Water Mill in 1977 photo, looking west (Paxton) 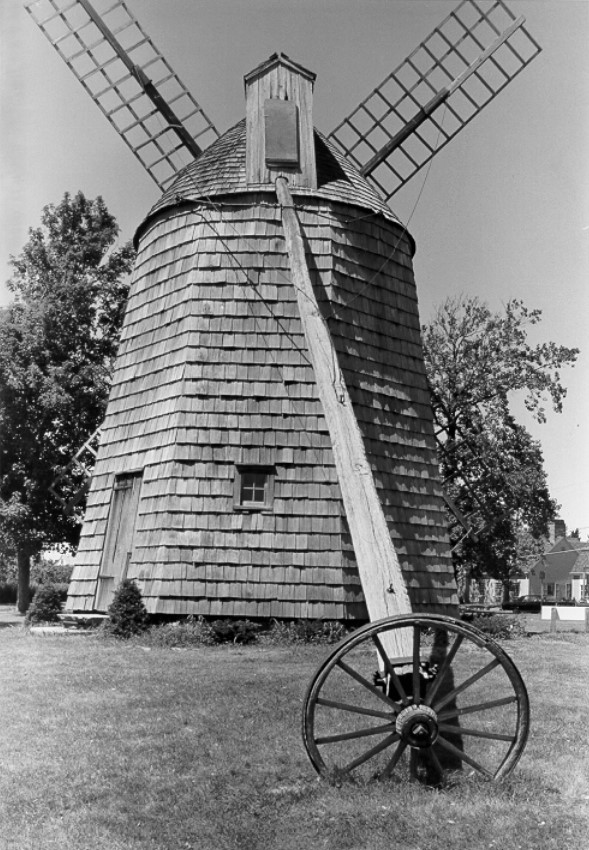 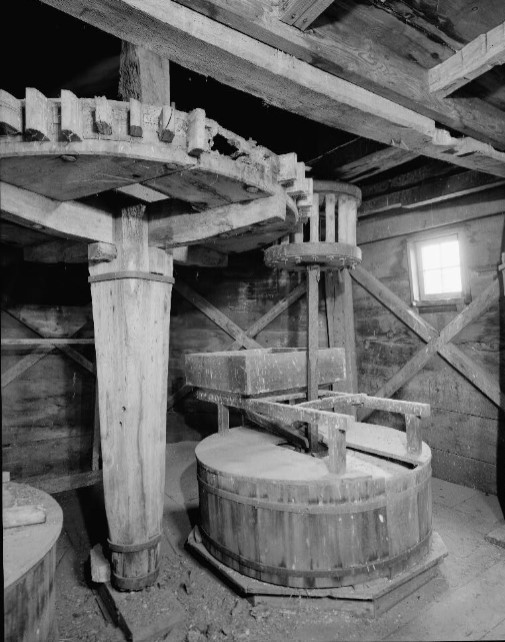 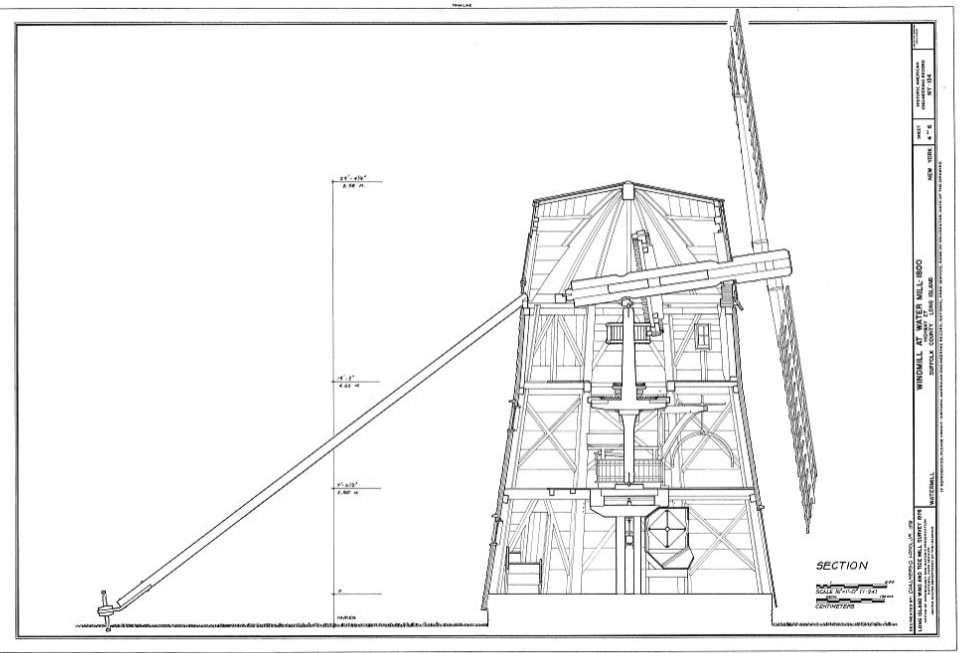 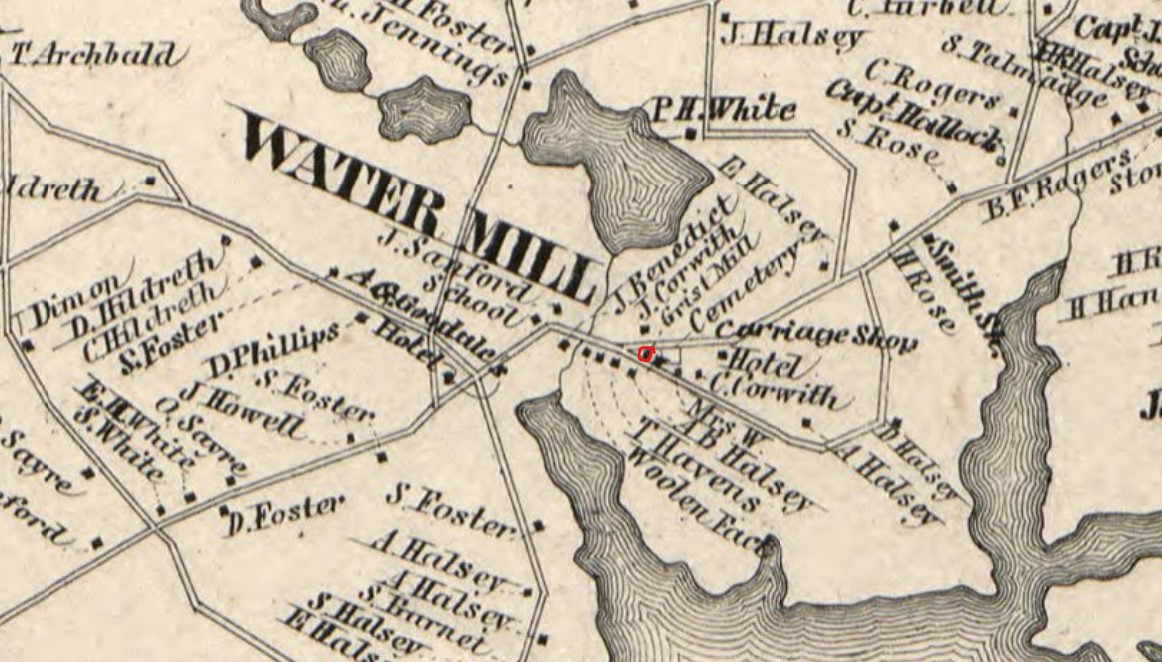 The Windmill at Water Mill originally stood in North Haven, a peninsula north of Sag Harbor formerly known as Hog Neck. In 1799, James Mitchel petitioned the Southampton Trustees for permission to build a mill and was approved. The mill was owned by Joshua Howell, a miller from Sag Harbor, by 1813 or 1814 when it was sold to James Corwith for $750. The mill was dismantled and moved to Water Mill where it was erected on what was then common land, to replace a mill that had been destroyed in a storm near the end of 1811. A woodworker from Bridgehampton named Sullivan Cook did 38.5 days of work for Corwith between September and November 1813, according to Cook's account book; this was presumably work on the mill in its new location. Corwith had purchased 9 acres in Water Mill north of the village commons in 1810 and married Harmenia Goodale, the daughter of a local farmer, in September 1813. Corwith did not buy the land where the mill stood until 1860, when he paid the village $20. Since the water-powered mill in the village switched from grinding grain to manufacturing cloth by 1813, Corwith's windmill would have been the only local grist mill. The windmill was used for grinding grain - mainly corn and also wheat and rye - into grist for animal feed, and also bolted flour for farmers. Corwith listed his occupation as miller in the 1850 census, but he may have retired from milling by 1860, when the 78-year-old's occupation was farming. At least two of the five sons of James Corwith - Caleb H. and Samuel J. - helped their father in the mill. James Corwith died at age 82 in July 1863; there was no will, but four of his sons turned over their interest in his farm and mill to their brother, Samuel, in 1864.

In 1887, the windmill was blocked from the prevailing breezes by construction of a large mansion facing Mecox Bay, and milling stopped. The structure, with most of the 1880s machinery intact, was not used for decades afterwards. The neighboring property owners of the large mansion - wealthy New York men - bought the windmill as decoration for their estate. The windmill was purchased by the Order of St. Dominic in 1931 after going through several owners and deeded to the Water Mill Village Improvement Association in 1934. The exterior was maintained as part of a public park beginning in the mid-1930s. A terrible hurricane in 1938 damaged the windmill and repairs were made, including a new windshaft made by John Bennett, a Southampton carpenter. After another hurricane in 1954, some interior tie rods and wooden bracing were added; wooden frames of at least two of the sails were replaced in the late 1950s. The arms snapped off during a violent storm in 1984 and were later restored.

The Windmill at Water Mill was documented in 1975 as part of the Historic American Engineering Record (HAER). The works had deteriorated from dry rot. The original machinery in 1800 would have included only one pair of millstones in the center of the mill, with an upright shaft engaging the brake wheel; this type of direct gearing with a tail pole resembled smock mills that had been built in Europe since 1650. With the tail pole rotating the arms into the wind, the miller could use the mill almost any day of the year. The oldest known smock mill built in America was constructed in 1764 on Nantucket Island, Massachusetts and survives to this day, after being restored by the Nantucket Historical Association in the 1930s. By the 1880s, the Windmill at Water Mill had two pairs of grinding stones and intermediate gearing.

The owner of the Windmill at Water Mill in 1975 was still the Water Mill Village Improvement Association Inc. A classic car show was held annually in recent years in September on the grassy lawn surrounding the windmill.

not applicable - in local park