Named for author and environmentalist Rachel Carson, the bridge that now bears her name was completed in 1926 and originally known as the 9th Street Bridge. It was renamed to honor Carson on Earth Day, 2006. The Carson Bridge is one of a trio of bridges known as the “Three Sisters” due to their proximity to one another and similarity of design. The other two, located just downriver, are the Andy Warhol and Roberto Clemente Bridges. The Carson Bridge, like the other two, is a self-anchored suspension bridge that connects Pittsburgh’s downtown with its North Shore. The “Three Sisters” were added to the National Register of Historic Places in 1986.

The Rachel Carson Bridge spans the Allegheny River and connects Pittsburgh's downtown with its North Shore.

A close-up of the one of the eye-bar catenaries that were used rather than traditional steel cables. 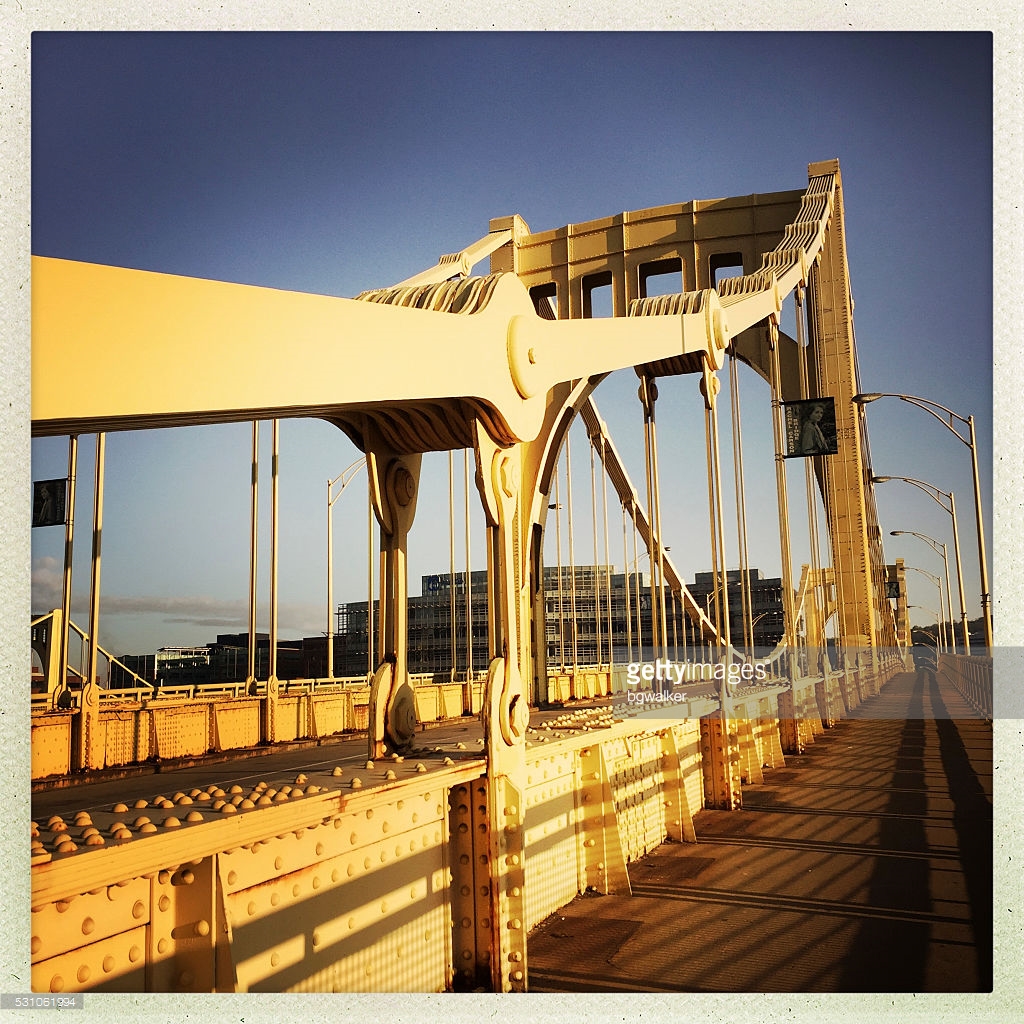 The Carson Bridge illuminated through the "Energy Flow" project which utilizes wind power to generate the power for the numerous LED lights on the bridge.

The second 9th Street Bridge is shown being constructed while the old, wooden covered bridge is simultaneously torn down in 1890. 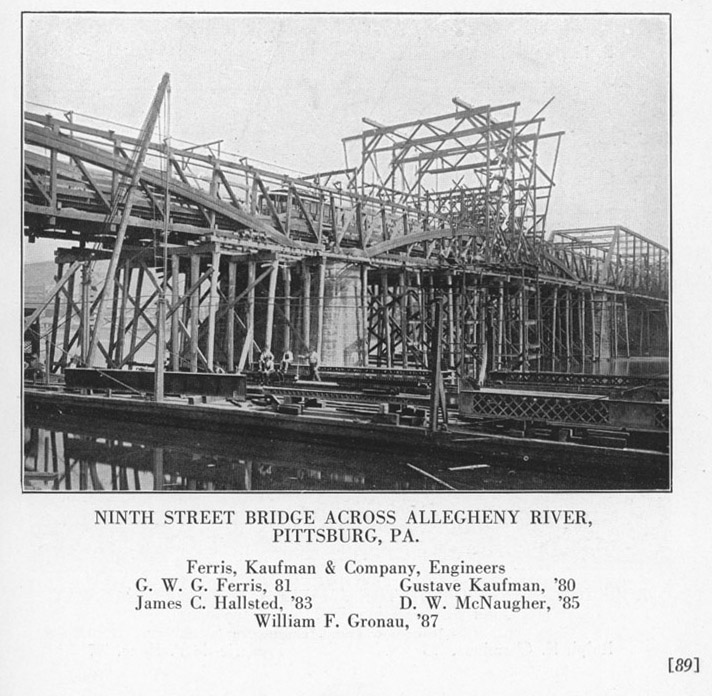 The "Three Sisters," the Rachel Carson, Andy Warhol and Roberto Clemente Bridges, in order, from the top.

The Rachel Carson stamp was introduced in 1981 during the popular Great Americans Series honoring special Americans from all walks of life and also honoring them for their contributions to society and their fellow man. 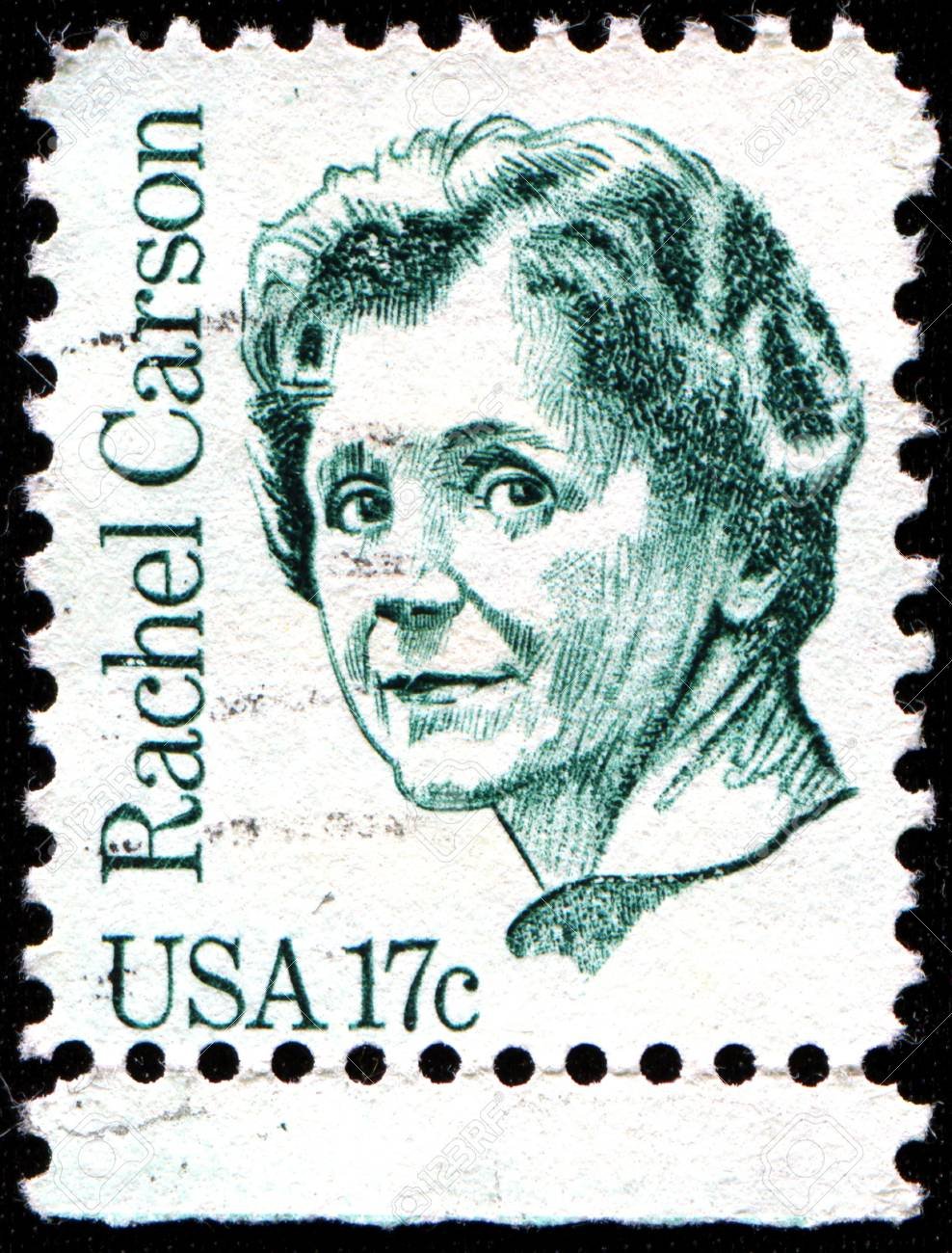 The first bridge that crossed the Allegheny River where the Carson Bridge now stands was a wooden, covered toll bridge that was built in 1839 and designed by Sylvanus Lothrop.  This toll bridge, known as the Hand Street Bridge, was designed for pedestrian and carriage traffic and was replaced in 1890 due to its inability to handle the weight of the newly arrived electric trollies.  This second bridge was a steel Pratt through truss bridge designed by George Ferris (of Ferris wheel fame) and Gustave Kaufman.

Shortly after World War I, the War Department established new guidelines for the nation’s bridges in terms of weight capacity, width and height.  It did so to ensure that bridges deemed vital could handle the weight of military hardware and that they were high enough to permit passage of necessary supplies on the waterways below.  In order to meet those requirements, Pittsburgh’s 6th, 7th and 9th Street Bridges all had to be replaced and the American Bridge Company of New York was tasked with designing both functional and aesthetically pleasing structures.

Their engineers, inspired by a German bridge over the Rhine River in Cologne, developed a unique design and construction method due to the unstable soil along the Allegheny River.  Typical suspension bridges drape massive cables on large towers and anchor them to the shore with huge concrete structures.  However, this option was unavailable to the designers of the Three Sisters.  As a result, they used a self-anchoring system and utilized eye-bars rather than steel cables to hang the bridge deck.  These eye-bar chains also drape over the bridge’s towers.  However, they are not anchored to the shore, but to the bridge deck’s stiffening girder.  The designers then hung the bridge deck on eye-bars of varying lengths that are tied to the bridge’s catenaries or eye-bar chains.

The bridge was renamed to honor Rachel Carson primarily due to the lobbying efforts of Esther Barazzone, the then President of Chatham University, Carson’s alma mater.  Carson, who penned numerous books, to include 1962’s Silent Spring which is credited with initiating the modern environmental movement, was born 15 miles upriver from the bridge that now bears her name, in the Pittsburgh suburb of Springdale.  She grew up on the family’s 65-acre farm, now the Rachel Carson Homestead, and graduated from the Pennsylvania College for Women with a degree in biology.  She then worked for the U.S. Bureau of Fisheries while also writing.  She was posthumously awarded the Presidential Medal of Freedom by President Carter in 1980, 16 years after her death.