Wild Goose Farm is in the Terrapin Neck region north of Shepherdstown, an area known for its agriculture and connection to the Shepherd family in the nineteenth century. The Shepherds owned the Wild Goose Farm from 1838 to 1911. The large mansion house was constructed in three phases: 1810 by George Stipp, 1842-1845 by R. D. Shepherd, and 1911 by Edwin Jarrett. The combination of buildings on the property is unusual and unique for Jefferson county and the property was placed on the National Register of Historic Places in 2018. 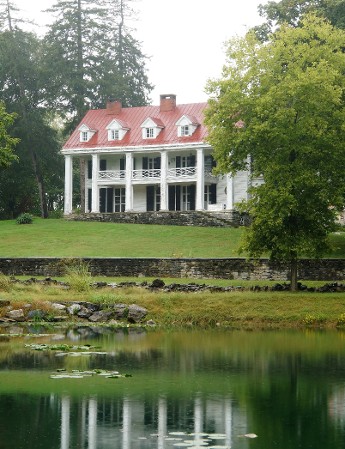 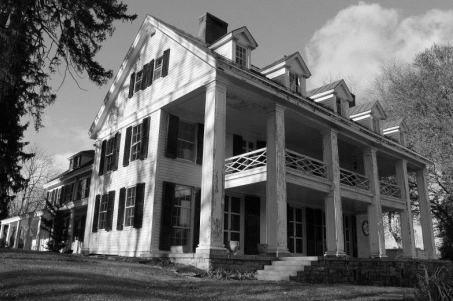 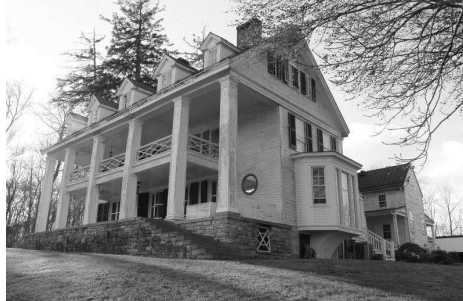 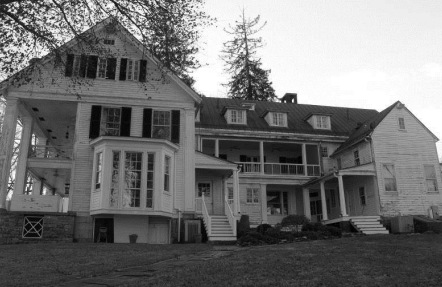 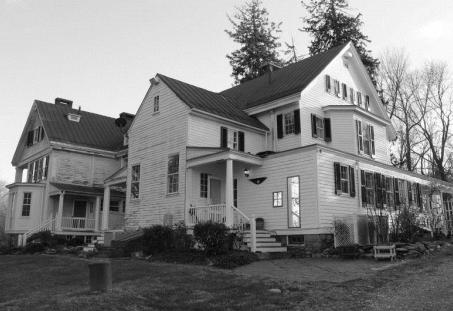 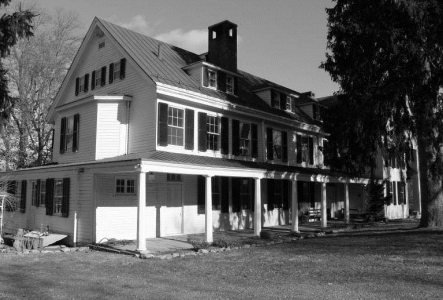 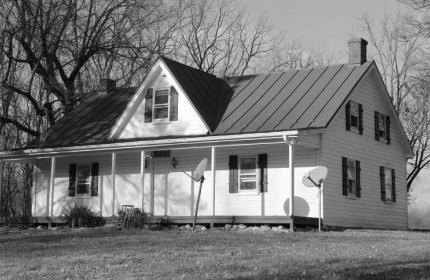 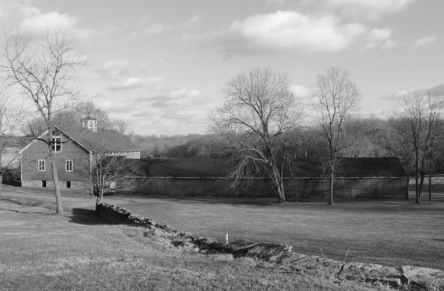 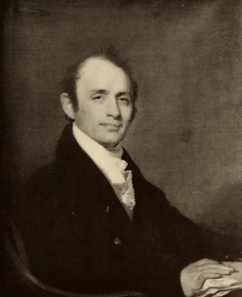 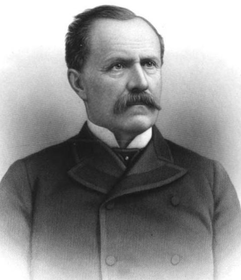 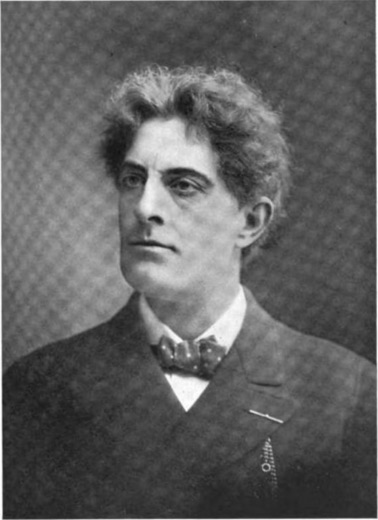 In the late 1700s the property was part of a large plantation owned by John Stipp. When Stipp put his estate up for sale in 1803 he advertised it as 462 acres with three houses. The plantation’s proximity to the Potomac and the river port at Shepherdstown was a major selling point. In the post-Revolutionary period there was a major effort, led by prominent politicians including George Washington, to shift transportation from the poor road networks to the Potomac River. Two years later, in 1805, Stipp sold 121 of the acres to his son George Stipp; this would become the core property of the Wild Goose Farm. The George Stipp house is possibly the frame house that serves as the kitchen wing of the manor that appears to date from the first years of the 1800s.

In 1810 James S. Lane purchased 187 acres from John Stipp Sr. and George Stipp for $5,599. When the Lane estate was divided in 1828 the 187-acre “George Stips Farm” was given to the heirs of Martha C. (Lane) Webb. The following year John S. Webb of Illinois sold the property to Van Swearingen of neighboring River View to the north with the condition that George Webb could remain a tenant on the farm for the remainder of his life. The Van Swearingen heirs then sold the estate, now 194 acres, to Charles M. Shepherd in 1838 for $10,072.

The Shepherd family was already a prominent landholding family in the Shepherdstown and Terrapin Neck areas. Abraham Shepherd, son of Shepherdstown’s founder, had been involved in the litigation of land disputes between the Fairfax estate and Joist Hite in the late 1700s and early 1800s. As a result of his work with the case Shepherd acquired a large amount of land, including the Swearingen estate of Springwood and land to the east of Wild Goose (Boidstones Place). Shepherd raised livestock (hogs, beef cattle, horses, sheep, and milk cows), raised staple grains (wheat, rye, oats, corn, and flax seed), and had an apple orchard with stills to produce apple brandy.

When Abraham Shepherd died in 1822 his estate was divided among his seven children. The eldest brother was Rezin Davis (R. D.) Shepherd who was a wealthy merchant worth millions of dollars in his own right by the time his father died. Apprenticed to a Baltimore merchant house at the age of sixteen, in 1802 R. D. Shepherd moved to New Orleans where he set up his own merchant house and became very successful. Shepherd also served in the War of 1812. He lost his wife young in 1814 and their only daughter attended school in Boston, so Shepherd spent a period training his nephew Henry as a merchant in New Orleans before turning his attention to the Shepherdstown property.

The Shepherd brothers all worked together to develop their inherited lands. Henry Shepherd owned Springwood and worked in breeding livestock, particularly sheep, cattle, and horses. Charles, who lived at Boidstones Place, acted as property manager for the brothers and bought additional land to add to the Shepherd property, including the purchase of the 194-acre Wild Goose tract in 1838. In 1839, R. D. Shepherd became a partner in Henry’s livestock business, with Henry managing the day-to-day affairs and Rezin managing the money. The Shepherd livestock business held a wide reputation for quality and improving the overall quality of American livestock. The Shepherd brothers were all slaveowners. In 1840 Charles had seven slaves, Abram had five, and Henry had twenty-two. In 1850 Rezin Shepherd was listed as having fifteen slaves at Wild Goose and by 1860 he had twenty-two.

R. D. Shepherd officially moved from New Orleans to Shepherdstown in the early 1840s. In 1841 Charles Shepherd sold all of his property to R. D. Shepherd for $19,000, including the Wild Goose property and Boidstones Place. Rezin Shepherd was responsible for the biggest alterations of the mansion and grounds at Wild Goose. The major expansion of the house occurred sometime between 1842 and 1845; family lore holds that the construction was in 1842 but tax records indicate that major improvements/construction happened in 1844/45. In some ways the new mansion fit the Greek Revival styles and larger homes that were growing in popularity in Jefferson County, but the Wild Goose house was much larger than any of the surrounding homes at 9000 square feet. In addition, the new design featured striking features of New Orleans “American Townhouse” styles from Shepherd’s time living in that city. One of the prominent features of this style is a full-length arrangement of façade openings, such as French doors, with a second story balcony.

While the mansion house is unique in style and size, many of the farm outbuildings are more typical of nineteenth century agricultural architecture of Jefferson County, such as the Pennsylvania bank barn. In addition to the livestock and agricultural operations on his property, Shepherd was involved in the development of Shepherdstown. He was engaged in the construction of Trinity Episcopal Church and a courthouse in Shepherdstown (now McMurran Hall) and advocated for the county seat to be moved to Shepherdstown. R. D. Shepherd retired entirely to the Wild Goose property by 1850 and he held over 700 acres valued at $240,000. He never remarried after the death of his first wife and records show that he shared the house with an overseer named Eli Sloan and a German stonemason named Conrad Smith, who likely did much of the stonework on the property. A gardener and his family also lived in one of the tenant houses on the property.

The Civil War greatly disrupted Shepherd’s businesses in New Orleans and he lost his slave property as a result of the war; however, the Wild Goose estate itself was not heavily damaged during the war and Shepherd fared better economically than many wealthy southerners. R. D. Shepherd died in 1865 and his property was inherited by his only daughter, Ellen Brooks, and her sons Peter and Shepherd Brooks. In 1866 Ellen and Peter Brooks sold the 396-acre farm entirely to Shepherd Brooks. He then purchased an additional 72 acres to make the estate 468 acres. In 1871 Brooks sold it to Henry Shepherd Jr. for $30,000. Shepherd was still in New Orleans running the family merchant business, but he moved his family to the Wild Goose property in 1872. The 1880 census also recorded five African American servants living on the property with the family. Henry Shepherd Jr.’s 1889 will gave the estate to his four sons: Rezin D., Henry M., William J., and Augustus M. Shepherd died in 1891 and the following year the younger three brothers sold their shares of the estate to Rezin (the eldest) for $24,531. This R. D. Shepherd was better known by his stage name, R. D. McLean. He was a successful actor and used Wild Goose as a retreat until he sold the 185-acre core of the estate to Edwin S. Jarrett in 1911.

Jarrett worked from New York City and traveled frequently, so he also used Wild Goose Farm as a retreat while leasing the farmland to tenants. He was responsible for the last period of construction on the mansion house. He added the Colonial Revival style to the mansion by raising the roof on the east wing by nine feet, adding a large Colonial Revival porch, and converting two of the east parlors into one big ballroom. Jarrett died in 1940 and Wild Goose Farm has gone through several owners since. Since 1940 the property has largely been leased to tenants and served as a retreat for the owner, including NASA’s Robert Moss in the 1960s and former WV Governor Gaston Caperton in 1998.

Wild Goose Farm was placed on the National Register of Historic Places in 2018 for the architecture of the mansion and surrounding dependency structures. The large mansion is unique for the area for its inclusion of New Orleans influence with Greek Revival and Colonial Revival styles, as well as for its size. The property also includes a mixture of unique and ordinary agricultural buildings that exhibit the agricultural use of the property. While the period of significance for the nomination was determined as 1810-1920, in 2018 the property retained most of its integrity and there was a restoration in process to remove any inappropriate additions to the structures. In addition to the mansion house, the NRHP nomination includes many other contributing structures: frame Pennsylvania bank barn with attached horse stable (c. 1845), frame tenant house (c. 1880), stone spring house (c. 1845), stone smoke/meat house (c. 1845), stone and frame carriage house (c. 1845), brick ice house (c. 1911), frame octagonal building (described as a “octagon Japanese Pagoda,” c. 1880), stone pump house (c. 1911), stone building (maybe plantation office, c. 1845), frame poultry building (c. 1880), corn crib/wagon shed (c. 1880), and the stone-enclosed water tower (early 1900s). The c. 1840 landscape is also considered in the nomination; this includes the network of stone walls on the grounds (c. 1842-1845) and the iron entry gates that date to 1842-1845.