A two-story home known as Fountain Rock stood here between 1831 and 1864, home to the Boteler family and part of Morgan's Grove. The estate saw activity during the Civil War, with troops skirmishing and encamping on and around the grounds. In 1864 Fountain Rock was burned to the ground by Union forces and never rebuilt. After the war, the property was used as a fairgrounds and then purchased for the current community park. 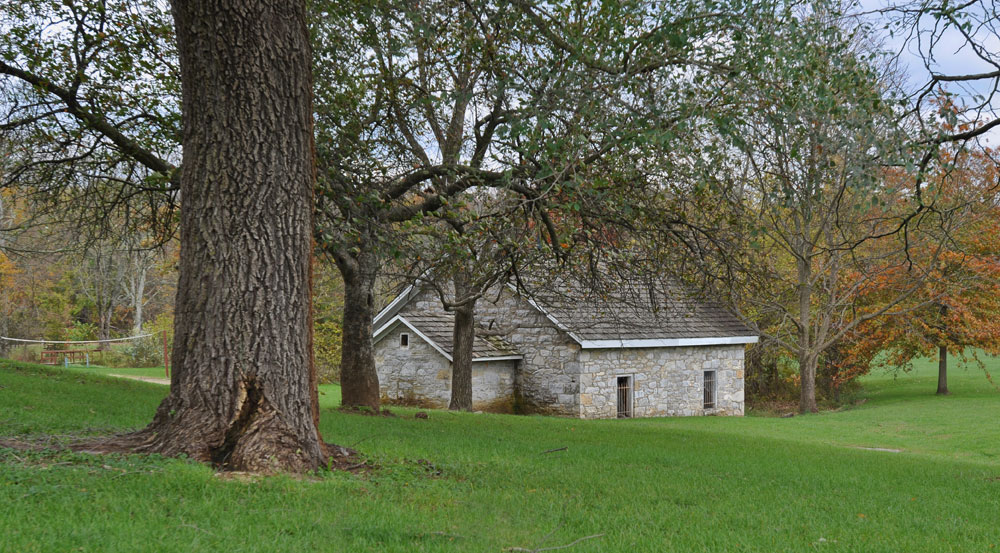 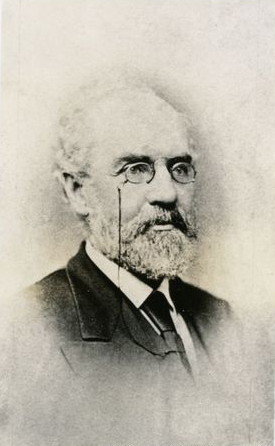 The current pavilion on the site of Fountain Rock, the original stairs in the bottom right corner 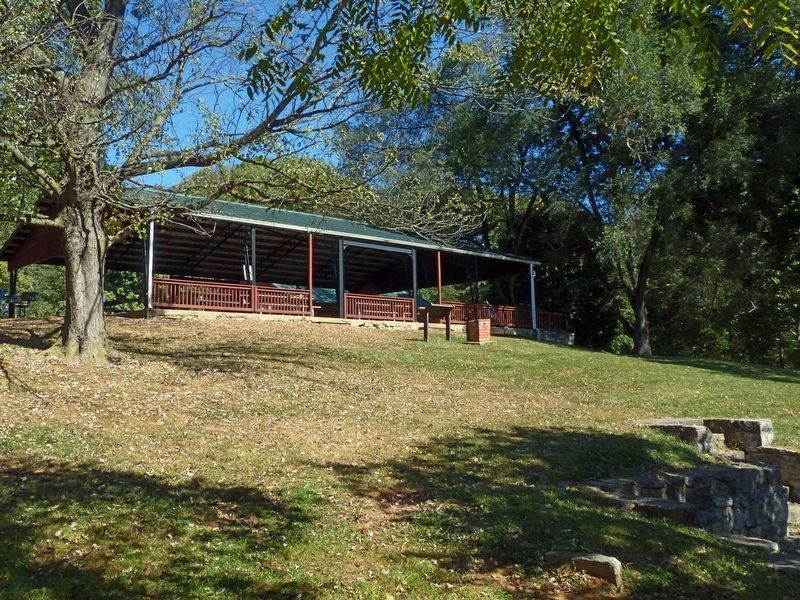 Rendition of Fountain Rock from the Civil War Trails Marker 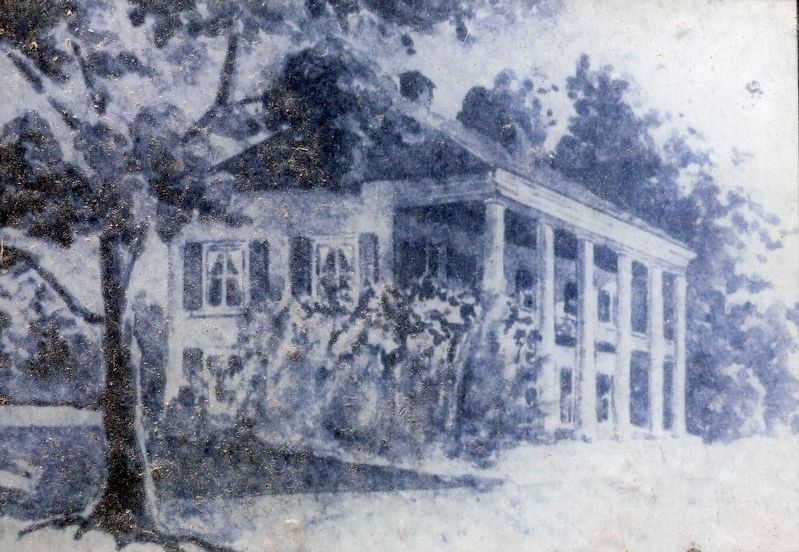 Dr. Henry Boteler (related to the Morgan family through marriage) built Fountain Rock in 1831 near a spring known as Fountain Spring. The two-story limestone house had ten rooms, was covered in stucco, and had a two-story columned porch. When Boteler passed in 1836, his son Alexander Robinson Boteler inherited Fountain Rock and the 200-acre farm, plus a cement mill near Shepherdstown. A. R. Boteler was a progressive agriculturalist and experimented with several crops and orchards on the Fountain Rock property. In the 1850s he was in high demand as a speaker on agricultural topics and was president of the Jefferson County Agricultural Society. In a financial blow, Boteler lost half of the estate in 1852 and the same year he became involved in Whig Politics. He was elected to Congress representing Virginia in 1859 and then elected to the Virginia legislature in 1861. He did not take this later seat, however, due to the start of the Civil War. Initially he advocated for remaining with the Union and protecting slavery, but once Virginia seceded he joined the Confederacy. During the war Boteler served as an aid to both Thomas “Stonewall” Jackson and J. E. B. Stuart, served in the Confederate Congress, helped design the Great Seal of the Confederacy, and served as a military judge on the staff of Robert E. Lee.

Due to its location at the top of the Shenandoah Valley, Fountain Rock and the rest of Morgan’s Grove saw a lot of action during the Civil War. This included the travel of troops from both armies, several skirmishes, and encampments on the property. Boteler and his family suffered almost total property loss during the war, due to its location and his position within the Confederacy. In 1861, shortly after Union forces arrested Boteler at his home and held him temporarily at a Union headquarters across the Potomac, the Union burned his cement mill in Shepherdstown. It is possible that the house was used as a hospital after the 1862 Battle of Antietam. The farmlands at Fountain Rock were destroyed by troops marching and encamping, as well as neglect and lack of workers. Boteler’s slaves all fled to the Union lines for freedom by mid-1863.

In 1864, Union General David Hunter gave orders in Harpers Ferry to burn several local estates in retaliation for Confederate General Jubal Early burning the Maryland governor’s mansion during his raid towards Washington, D.C. Under these orders Captain William Martindale and a detachment of the 1st New York Cavalry burned the home of Andrew Hunter in Charles Town, Fountain Rock, and Bedford, the estate of Henrietta Bedinger and Edmund Jennings Lee. When Union troops torched Fountain Rock it was occupied by Boteler’s two daughters and three grandchildren. One of the sisters sadly played her piano as the soldiers set the house on fire and then evacuated.

Fountain Rock was never rebuilt and Boteler quickly sold the destroyed mill property. He turned his attention towards industrial projects, such as bringing the telegraph and railroad to Shepherdstown, and continued to travel as a speaker on agricultural and Confederate topics. In 1876 President Grant appointed Boteler to the U.S. Centennial Commission and later he worked for the U.S. Tariff Commission and as a Pardon Clerk in the U.S. Department of Justice. He was also a founder of Shepherd College. Between 1873 and 1877 Col. Boteler occupied nearby Poplar Grove (Rosebrake) owned by Caroline Bedinger.

In 1889 the Morgan’s Grove Agricultural Association bought the Fountain Rock property to use as the grounds for an increasingly popular agricultural fair that had begun in 1885 on the neighboring Morgan/Falling Spring property. The annual fair was held between 1885 and the early 1930s. The ruins of Fountain Rock stood until around the turn of the century when parts of the stone walls were used as a foundation for a dance pavilion. During the Great Depression the fairs began to fail, and the property was purchased by P. P. Steptoe. In 1961 the Shepherdstown Men’s Club purchased twenty acres of the property for a community park, now Morgan’s Gove Park. A new pavilion was built on the site of Fountain Rock in 1982, although remains of the stone foundation do remain. Near the current pavilion is an original stonewall with original steps leading to the springhouse. The wall, steps, and stone springhouse are survivors from the Fountain Rock estate.

The Boteler Paper are at Duke University.