Sunnyside Farm is a historic farm and dairying operation outside of Kearneysville, WV. The significance of Sunnyside Farm is largely connected to William Fulk who owned the farm from 1899 to 1942. He farmed and raised an orchard on the property, but was most significant for his role in the dairying industry of Jefferson County. He was a founder of the Kearneysville Creamery in the 1910s and ran the operation between 1919 and 1921. Sunnyside Farm was placed on the National Register of Historic Places in 1999 for the architecture of the main house and historic agricultural buildings, as well as the connection to William Fulk. 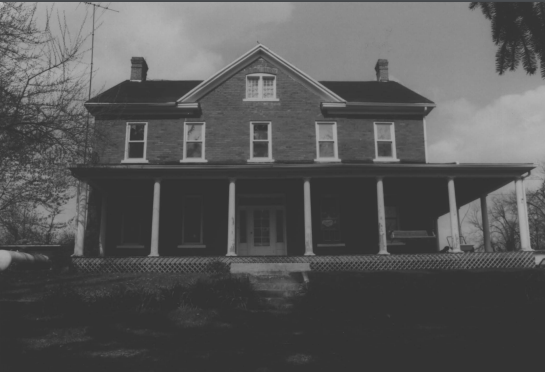 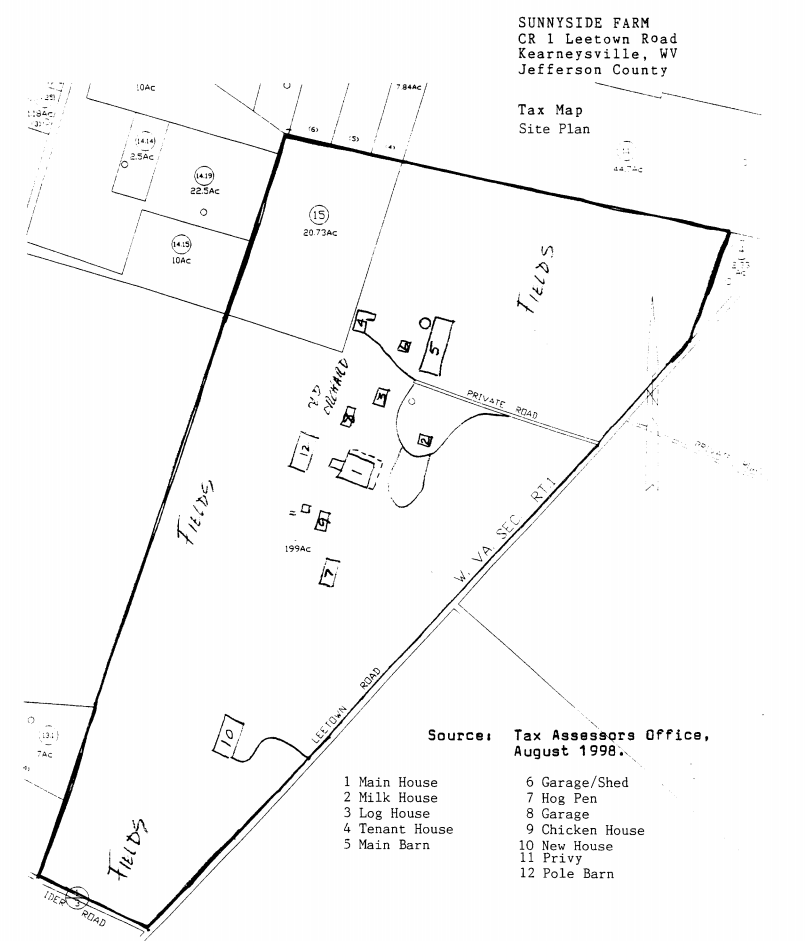 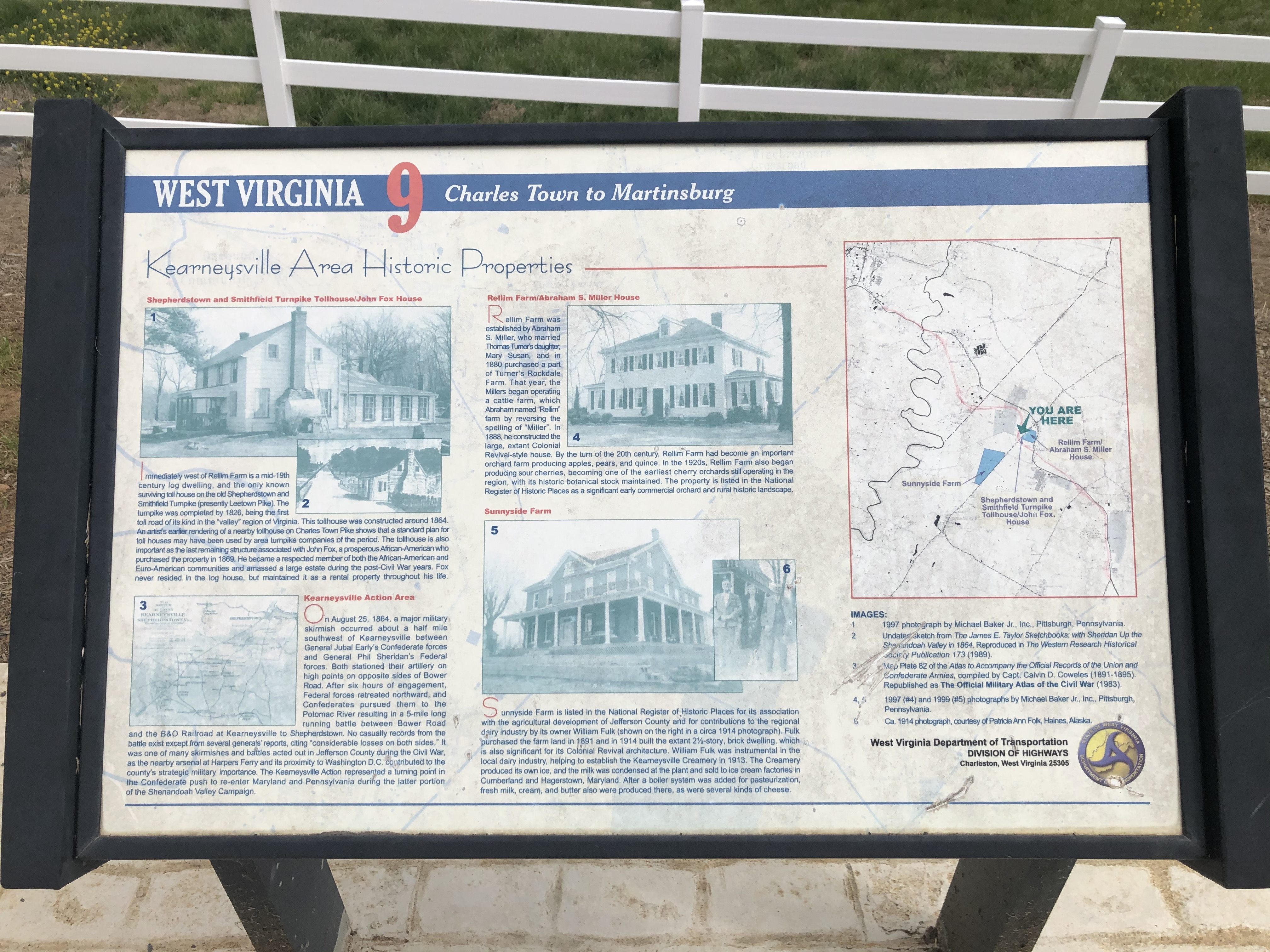 Section of marker that shows Sunnyside house and William Fulk 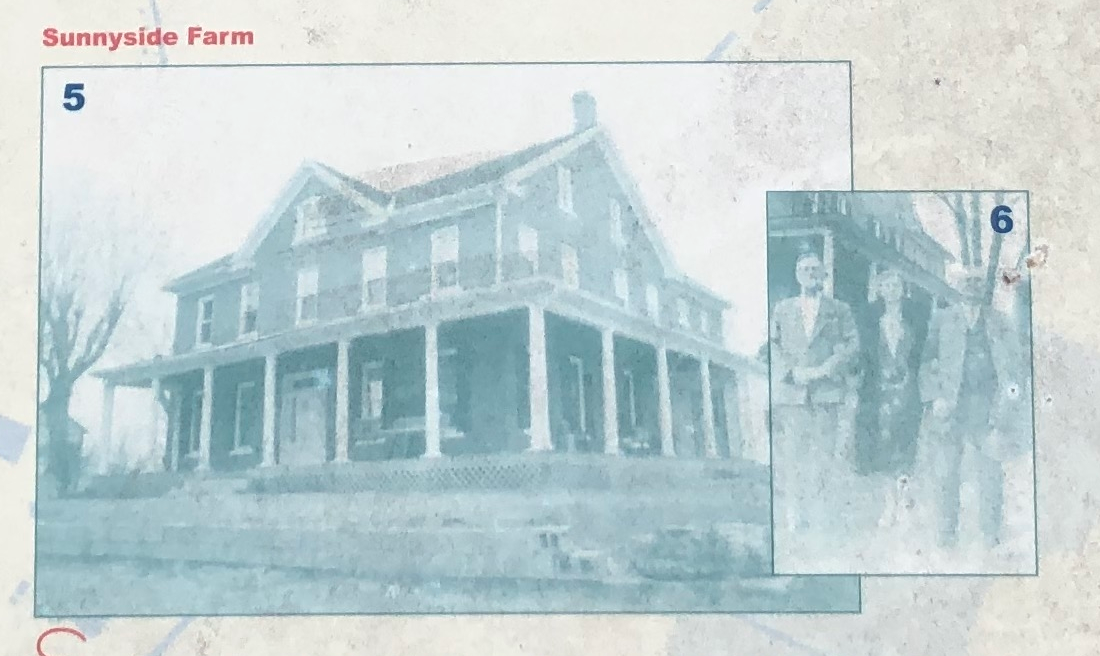 1920 advertisement for a production manager at Kearneysville Creamery 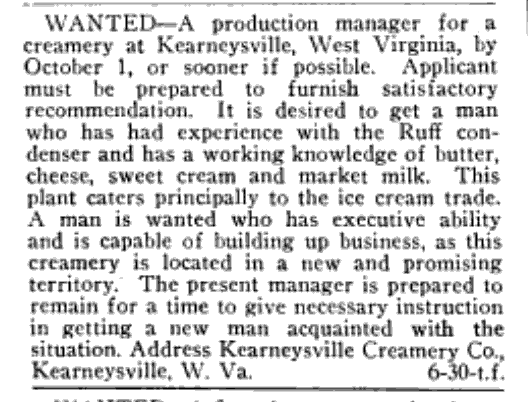 The Sunnyside Farm property was originally purchased in 1874 by Robert and Mary Helm and the Helm’s grandchildren deeded it to William Fulk. Charles and Dora Rogers deeded their half of the farm (100 acres) to Fulk in 1899 for $5.00 and in 1903 Charles’ sister Katherine deeded her half to Fulk for $4,500. Fulk later purchased 20 acres from nearly Traverler’s Rest for $200 in 1921. There were several buildings on the farm property when Fulk bought it in 1899, but Fulk gradually replaced the original structures with new ones. He built his barn in 1911 and the main brick house in 1914. He contracted C. D. Burns Lumber Co., Inc. of Martinsburg to construct the house and take down old structures. The house at Sunnyside Farm is a 2.5 story brick house built in the Colonial Revival style. The main entrance has sidelights and a transom window, and the house has both a central and end gables. On the front is a full wraparound porch and there is a two-story porch on the rear of the house. Interior features include roundel blocks on doors and window frames, French and pocket doors, and built in cupboards, including the original pullout bins for flour and sugar in the kitchen. At the back of the house is a detached smoke house, also constructed in 1914.

William Fulk was a dairy farmer and raised crops of alfalfa, wheat, barley, and corn. He also had an orchard between 1925 and 1948 that produced several varieties of apples; some remnants of the orchard survive near the tenant house. Fulk invested in advancements in farming and dairying equipment to keep up with the demands of his trades. These included his binder for harvesting wheat and barley and his dairying equipment, such as the concrete cooler for 10-gallon cans of milk and a roller system for cleaning the cans when they returned from the creamery. He was also known in the community for his pair of matched black horses that were often used in local funeral ceremonies.

Fulk was one of twelve directors that began the Kearneysville Creamery in 1913. After some disputes between the directors Fulk purchased the Creamery in 1919 along with C. D. Wysong and C. W. Blue. Fulk acted as director of the Creamery and in 1919 they were paying $20,000 a month to local farmers for their milk. Under Fulk, Wyson, and Blue the Kearneysville Creamery rapidly expanded in two years. In 1920 they paid $142,000 for milk and cream from local farmers to sell to markets in Washington and Baltimore. They began making their own ice and condensed milk to sell to ice cream factories in Cumberland and Hagerstown. They also bought a boiler system to pasteurize milk, cream, and butter for sale. In April 1921 the partners sold the Creamery to the Wise Brothers who opened Superior Dairy in Martinsburg; the new owners used the old creamery building as a wholesale house to ship canned goods because of its location near the B & O Railroad.

William Fulk operated the Sunnyside Farm until 1939 when his daughter, Nellie F. Hill, took over; William Fulk passed away on July 1, 1942. Hill operated the farm until 1963 when she retired; Nellie Hill died in June 1986. Granddaughter Elizabeth Moore then owned the farm and leased out the land and use of the barn. She owned the farm when it was placed on the National Register of Historic Places in 1999. In addition to the main house other contributing structures for the NRHP nomination include: Milk house (c. 1899), log house (c. 1850), chicken house (c. 1920), privy (c. 1930), garage (c. 1920), 2.5-story tenant house (c. 1920), hog shed (c. 1915), and pig house (c. 1899). The main barn is non-contributing because it was built in 1985, but it was built on the original stone foundation of the 1911 barn that burned that year after a lightning strike. The shed extension toward the house is remnant of the original barn. It appears that Sunnyside Farm is still in the Moore family at present.