The ruins of St. George’s Chapel are a “T” shaped building with stabilized walls that range from four to eighteen feet in height and two feet thick. This Anglican Church was constructed between 1771 and 1774 to serve local families such as the Washingtons, Worthingtons, Morgans, and Stephensons. The church was only active a short time because the Anglican Church declined after the Revolution. In use only until the early 1800s, the Chapel rapidly declined and became ruins that were a popular local tourist location. The ruins were stabilized in 1975 as part of the Bicentennial and archaeological investigation of the property were done in 1999. St. George’s Chapel was placed on the National Register of Historic Places in 2001 with the hope that further archaeology will be done on the property. 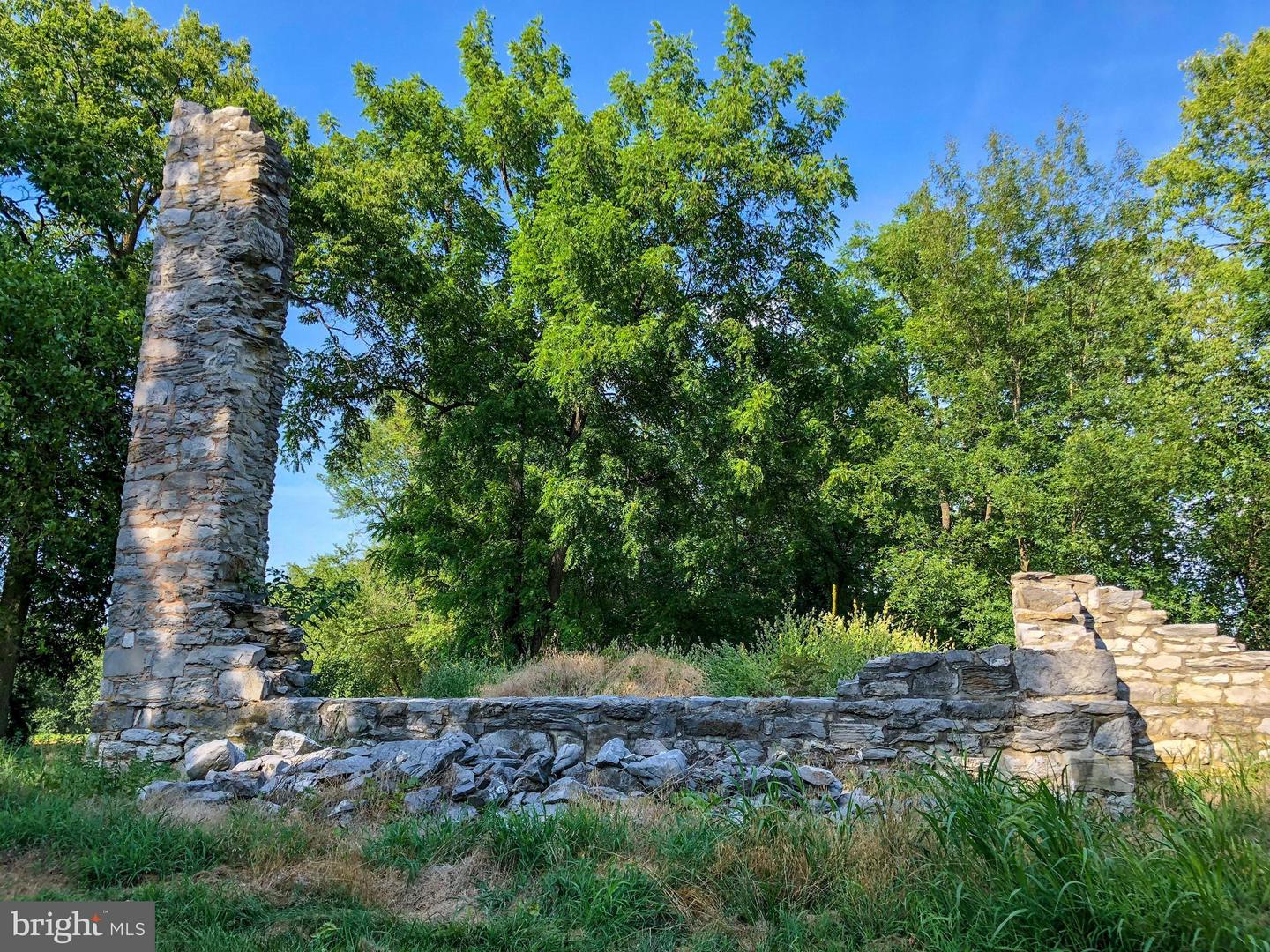 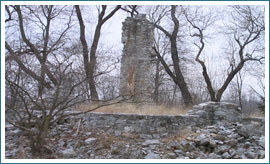 Survey of east and south elevations, 1933

Survey of west and north elevations, 1933

Postcard of the Ruins mailed in 1917 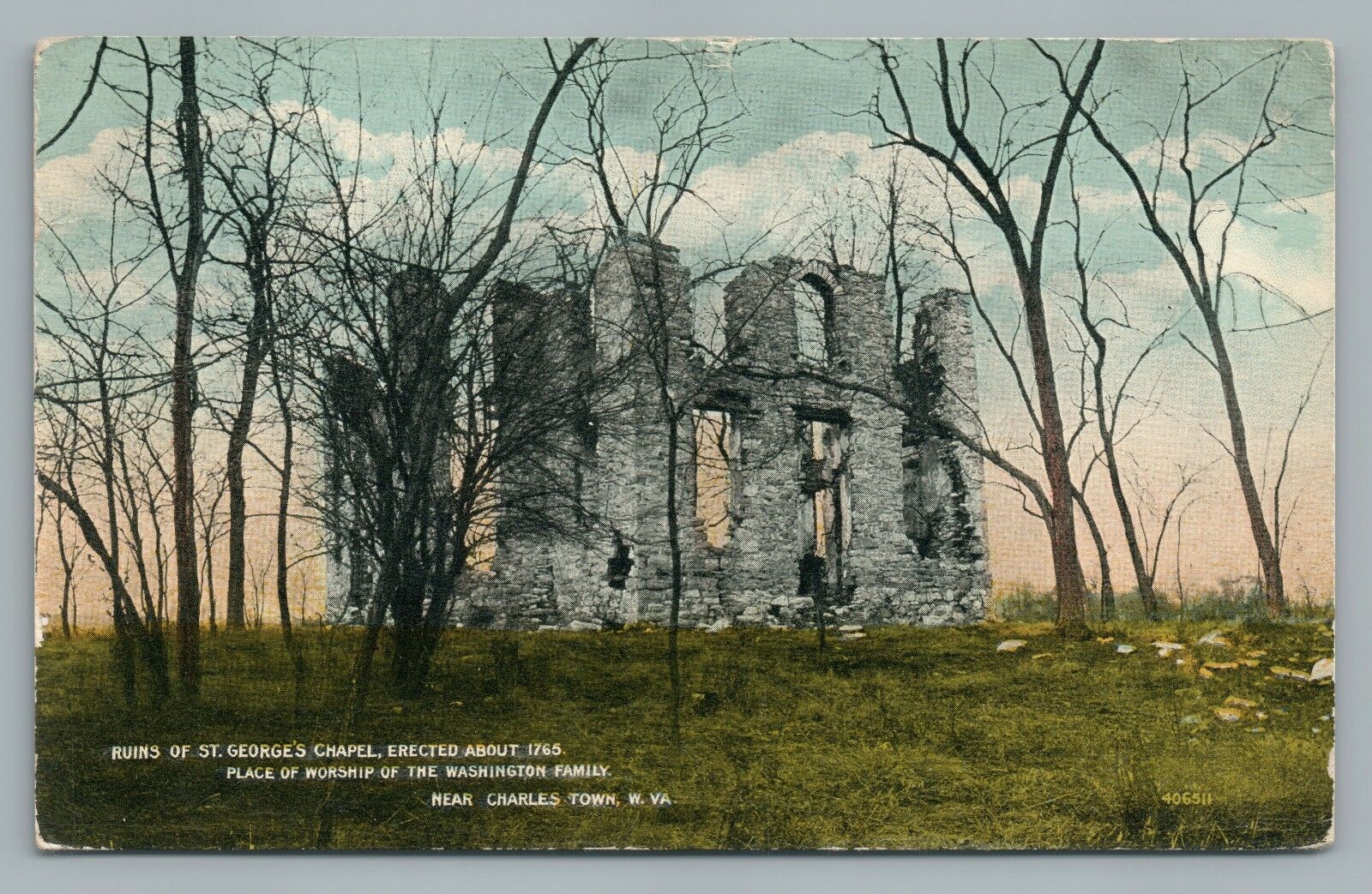 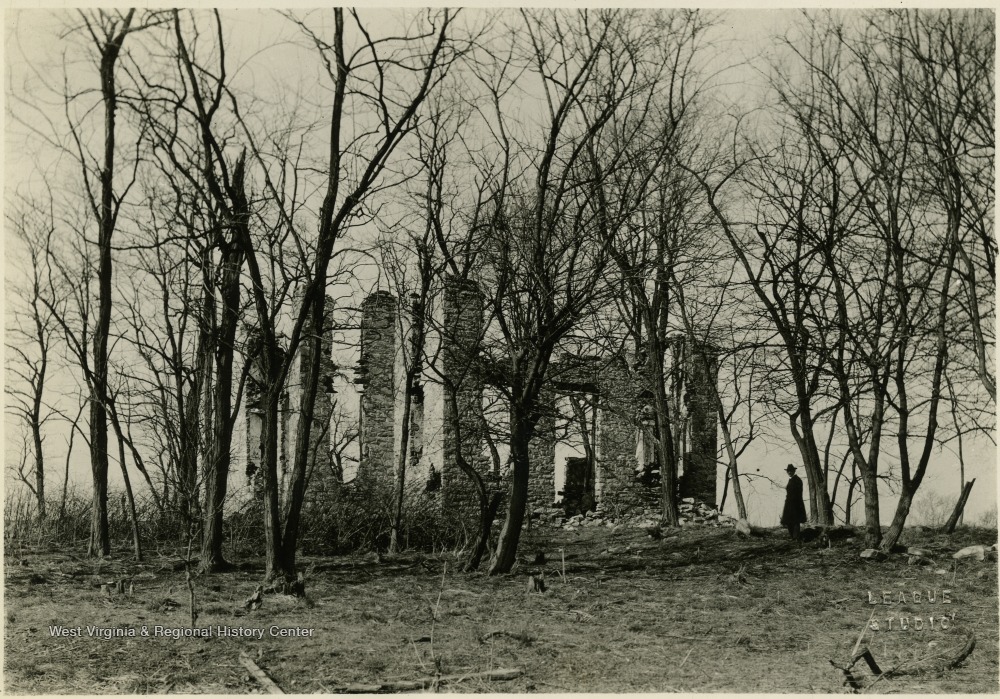 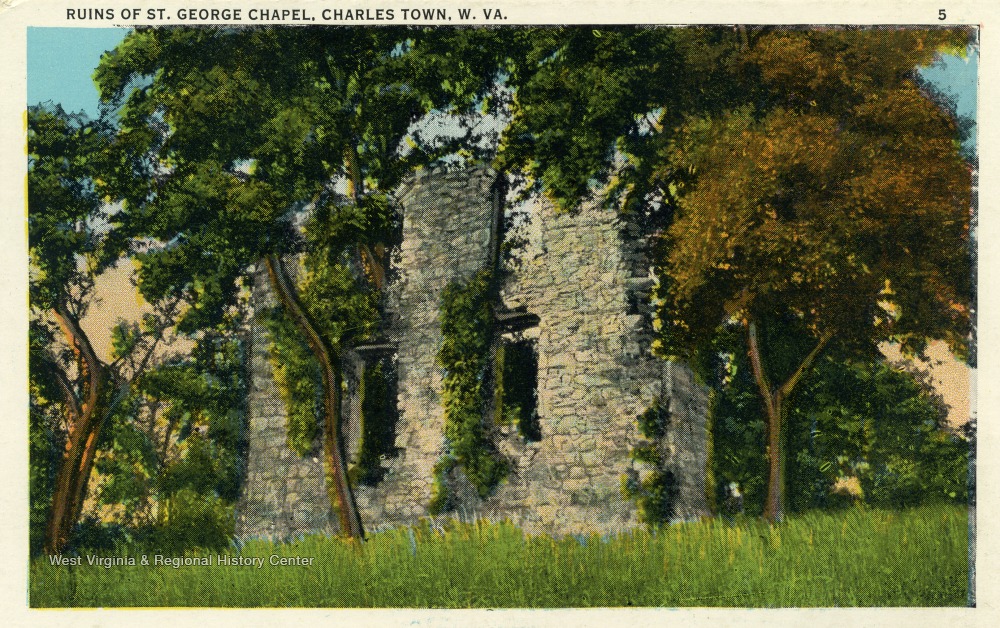 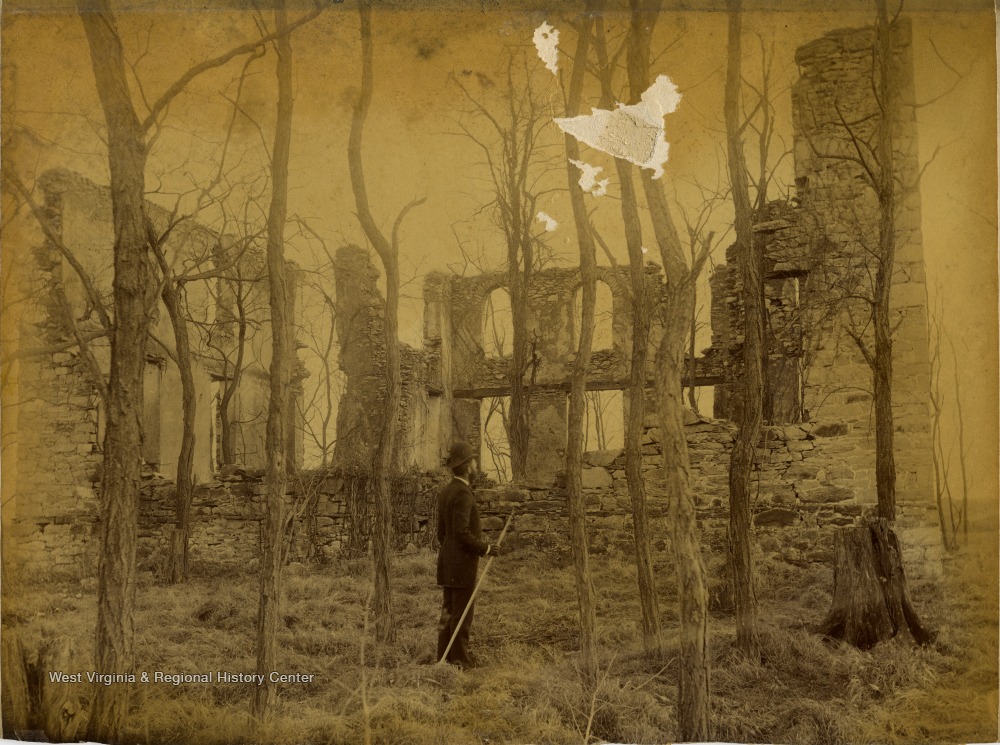 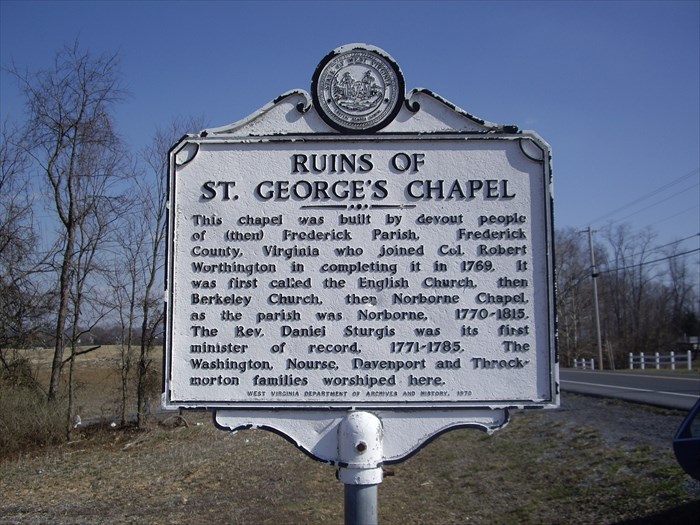 Norborne Parish was organized in 1771 to serve present-day Jefferson, Berkeley, and Morgan counties. This was a division of the previous Frederick County parish, as the population increased in the western counties of Virginia. The Anglican Church was the state supported religion of colonial Virginia and parishes oversaw administration of local areas, including the taxation of residents for the maintenance of church property. The parish leadership was often comprised of influential men who held power within their communities. In the case of the Norborne Parish, the first vestry consisted of twelve men: Samuel Washington (senior warden), William Henshaw (junior warden), Robert Worthington (collector of tithes), Adam Stephen, Thomas Rutherford, James Keitz, George Cunningham, Magnus Tate, John Neville, William Baldwin, Morgan Morgan II, and Hugh Stephenson. They were responsible for two existing churches, a 1769 church in Shepherdstown and a 1738 church in Bunker Hill.

As the population grew in the late 1700s, especially in Charles Town, and the wealthy elite of the region complained about the long travel times to the existing churches, the vestry decided to build another church. Originally called “Norborne,” “Berkeley,” or “Trinity,” the church was constructed sometime between 1771 and 1774. All documents related to the construction of the church have been lost, so the architect and exact date is unknown. The exact cost is unknown as well, although the estimate is £600, twice the cost of an average church. The design of the church was much larger than the older churches in the area; the “T” shape and second-floor gallery meant that the new church had twice the seating as the other churches. Local families would have been tithed to support the construction of the new church, and many prominent families donated furnishings and other items. Robert Worthington, Jr. of Quarry Banks (now Piedmont) donated the plot of land for the church (apparently the land was not officially deeded to the church and was part of the Piedmont estate until the plot was sold to the Davenport family in the 1850s).

Because the Chapel was constructed during the American Revolution it was in use for only a short period of time. The congregation split over the Revolution and the Anglican Church was a symbol of Britain. Many families in the local population were not Anglican worshipers, and the taxation of these residents to support the Church was one of the grievances against the British. After the Revolution, the Anglican Church was abolished and replaced with the Episcopal Church. Taxation for state-sponsored religion was prohibited under the U.S. Constitution, and it was now the responsibility of church congregations to raise funds for their own support. Lack of funds, the decline of the Anglican Church, and the aging population of the original supporters put the church into rapid decline. Within twenty years of construction, it was noted that the church was deteriorating and in need of repair.

The church was serviced by rotating ministers until the early 1800s when the name “St. George’s Chapel” was adopted by the community. The last service mentioned in local records was in 1811, although it is possible that the church was used later than that. In 1817 a new Zion Episcopal Church was constructed in Charles Town, and this left the St. George Chapel to deteriorate. A fire in the new church in 1843 likely destroyed any original items moved from the Chapel and the original records of the church. St. George’s Chapel quickly deteriorated in the 1800s. It was used as a barn for the Briscoe’s at Piedmont for a period and by 1859 sketches of the site show that the church had lost its roof and a wall. That year the church and grounds were purchased by Braxton Davenport, owner of neighboring Altona. During the Civil War, it is very likely that the ruins and property were used as part of encampments as the armies traveled and operated through the region.

From the 1890s through the 1930s the ruins were a popular tourist spot and more embellished myths about the Chapel and its worshipers emerged during this period. With the Colonial Revival interest in anything related to George Washington and his family increased, in this case the role of brother Samuel Washington in the founding of the church. In addition, with the economic devastation of the Civil War and then the Great Depression, St. George’s Chapel became a local symbol of a wealthier and grander time. The interest in St. George’s Chapel is evidenced by the decision of the Historic American Building Survey to record the ruins in 1936, it being only the third site in WV to be so recorded.

The nation’s bicentennial in the 1970s increased interest in the Chapel again, and in 1974 the Davenport family deeded the Chapel property to the Bee Line Chapter of the Daughters of the American Revolution (DAR). The family also made a donation towards the stabilization of the ruins and this launched the process to highlight the property as part of Bicentennial celebrations. The stabilization project in 1975 was conducted by stonemasons from Harpers Ferry NHP and the goal was to prevent further loss by removing unstable portions of the walls. The majority of the walls were brought to a uniform height of about four feet and capped with a course of mortared stone. One corner (NW) was stable enough to leave at eighteen feet. A lot of rubble was moved inside and outside the foundations as the ground was excavated; much of this rubble now rings the walls in piles up to six feet representing the collapsed walls. One doorway was left open as an access point into the ruins. Some other improvements were made for the Bicentennial, including a parking area, road, and landscaping.

After the Bicentennial, interest in the Chapel faded rapidly and the DAR struggled to maintain the site and prevent problematic recreational use of the ruins. By 1989 the DAR surrendered the chapel back to the Davenport family to maintain the grounds. In 1999 an archaeological investigation was done on the grounds. When St. George’s Chapel was placed on the National Register of Historic Places in 2001 it was nominated for its historical significance but also the possibility of further archaeological explorations. There is a cemetery within the church grounds, but the location, size, and burials have not been determined. The 1999 archaeological investigation discovered one possible grave shaft. According to the NRHP nomination, one hope is locating the missing graves of Washington family members, including Samuel Washington. At the time of the 2001 nomination archaeological digs were happening at Harewood, Washington’s home, to try and find his grave. There is a plaque there stating that Washington was buried there in the graveyard, but as of 2015 the family historian, Walter Washington, stated that the location of Samuel Washington’s grave, and those of his wife and children, were still unknown. Because Samuel Washington was the senior warden of St. George’s Chapel, the NRHP nomination mentions that he might be buried at the church, and this is a goal for future archaeology on the site.

“Tennant visits historic Washington family home.” The Journal. July 17, 2015. Accessed December 2, 2020. https://www.journal-news.net/news/local-news/tennant-visits-historic-washington-family-home/article_cb51df35-cc60-5246-aa23-3404d7a9464d.html. [This article includes an interview with Walter Washington in which he references the graves of Samuel Washington and his family]