Ripon Lodge was built in 1833 by Henry S. Turner, a prominent area landowner. The home is an example of 18th/19th century stone construction from local materials with unique features of its “T” shape and spiral staircase. The summer kitchen and smoke house are well preserved examples of period estate ancillary structures. For its architectural design and connection to the Turner family, Ripon Lodge was placed on the National Register of Historic Places in 1998. 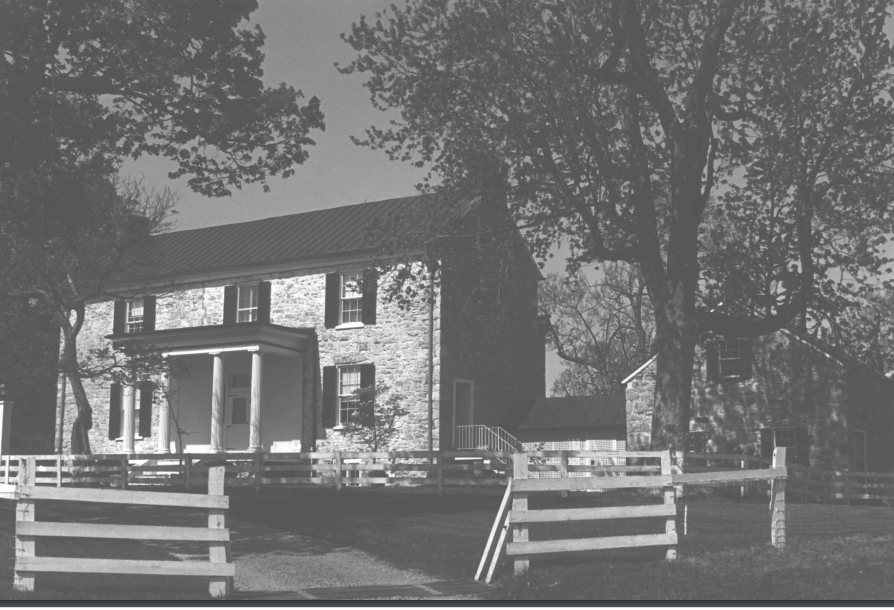 Ripon Lodge was constructed in 1833 by Henry S. Turner as part of his “Wheatlands” estate. Turner was one of the largest landowners in Jefferson County; in addition to “Wheatlands” he also owned the “Straithmoor” estate. The main house of “Wheatlands” (sometimes called “Castle Thunder”) stood nearby to Ripon Lodge, but was dismantled and never rebuilt. Nearby Rippon, WV was named after Ripon Lodge.

The Lodge is a two-story T-shaped stone house. The construction is largely out of roughly shaped limestone rubble. The entrance is in the Greek Revival style with a portico featuring Doric columns and a flat roof. The stone texture around the door is smooth in contrast to the otherwise rough exterior walls, emphasizing the portico entrance. Inside the original floorplan (one room deep) is still intact and much of the interior is preserved, including planking and flooring. There were some 19th century alterations with finishings and decorations, such as a gray marble Gothic-style mantel in one of the parlors. A noteworthy feature is the spiral staircase in the central hall up to the second floor. In addition to the Lodge, original structures include a 1.5-story summer kitchen attached to the house with a latticed breezeway, a meat (smoke) house, and a one-story board-and-batten structure. These structures were originally part of a much bigger estate and farming operation.

Turner died in 1834, the year after Ripon Lodge was constructed. Ripon Lodge went to son William F. Turner and Wheatlands went to son George W. Turner (who was killed as a bystander in John Brown’s raid of Harpers Ferry). William Turner served as a Justice of the Peace in Jefferson County (1836-1838) and served two terms in the Virginia House of Delegates.

In 1916 the estate passed from the Turner family to L.M. Long, then to Long’s daughter, Florence Long Allen. After her death in 1972 it was purchased by Archibald M. S. Morgan who did restoration on Ripon Lodge and owned the home when it was placed on the National Register of Historic Places in 1998.