Shannondale Springs is a 66.5-acre site on the Shenandoah River where a resort property operated between 1820 and 1909, and the site’s three mineral springs were used before and after that period. While very few structures remain from the resort, the photographic, textual, and archaeological evidence about the property illustrate the trend to use mineral springs for healing, restorative, or tourism purposes as well as efforts to increase tourism and the economic vitality of Jefferson County. The property is currently managed by the West Virginia Division of Natural Resources and it was placed on the National Register of Historic Places in 1998. 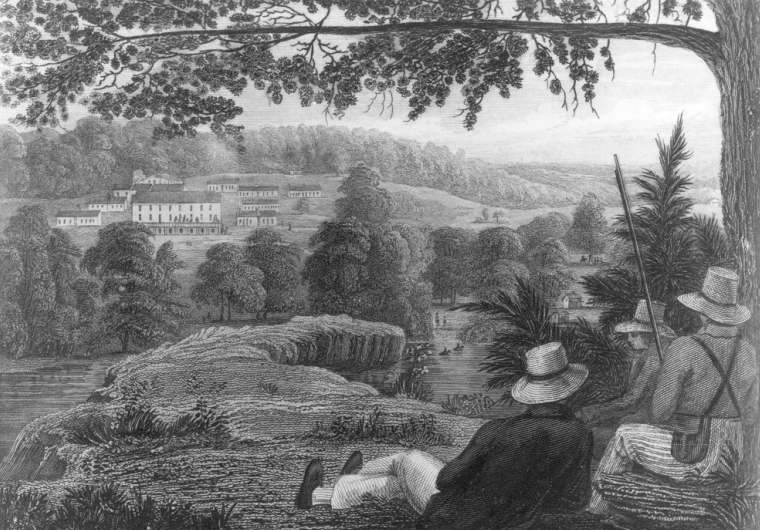 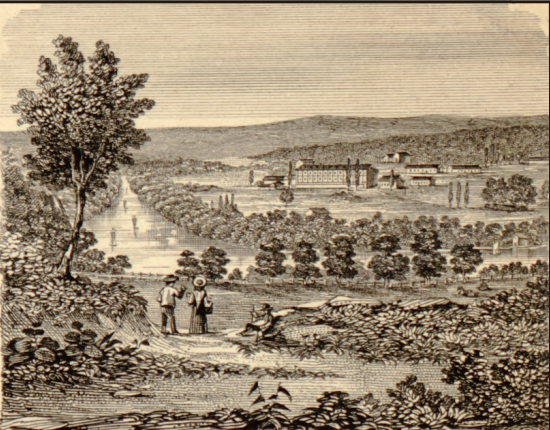 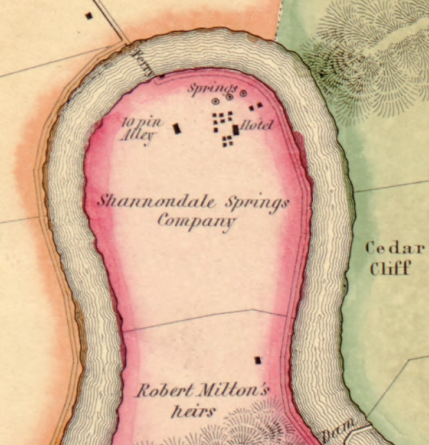 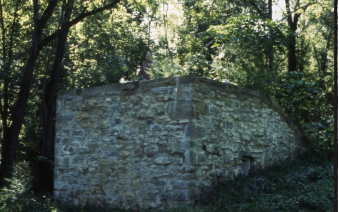 The Shannondale Property was initially in the estate of Lord Fairfax and 29,000 acres was acquired by his cousin, and agent, William Fairfax in 1740. In 1754, William Fairfax deeded the estate to his son, George Fairfax, who then bequeathed the property to his nephew Fernando Fairfax in 1787. Lord Thomas Fairfax, William Fairfax, and George Fairfax were all closely connected to George Washington and Fernando Fairfax was Washington’s godson. Fernando Fairfax was eighteen when he inherited the 29,000 acres at Shannondale and he was the first to try to develop the property. He did not develop the area around the springs, but did built his estate (Shannon Hill) across the River, establish the ferry around 1808 or 1809, and explore the idea of marketing the iron resources on the land or building a forge. Despite never fully realizing his hopes for the economic development of Shannondale, Fairfax was one of the wealthiest residents of the County and the area’s largest slaveholder. He was an original trustee of the Charlestown Academy (1797), an original member of the Jefferson County Court (1801), a justice of the peace, and had an impact on the development of Charlestown. Starting in 1814 Fairfax faced mortgage debt and chancery suits that forced him to sell away plots of the estate and several of his assets before he died in 1820 at the age of 52.

Before his death he sold off the “Horse Shoe Tract,” the future site of the resort. In 1819 he sold two-thirds of the property to investors Thomas Griggs, Jr. and Benjamin Beeler and the following year Fairfax sold the remaining third. Griggs and Beeler immediately started developing the property around the three mineral springs into a resort to draw tourists. They built cabins and a hotel in 1820 and immediately drew visitors to the springs. Very quickly Beeler became indebted to several people and he had to sell his shares. By 1821 the resort property was owned by James L. Ranson, Thomas Brown, Samuel W. Lackland, Thomas Griggs, Jr., and James Milton (a relative of Beeler). Despite initial success, the springs did not do well during the 1820s and early 1830s due to its location and possible arguments between the investors that stalled the completion of resort amenities and the maintenance of standing buildings. By the early 1830s most of the property was under the ownership of Samuel Lackland.

Fortunes changed again in the mid-1830s starting with new transportation infrastructure coming into Jefferson County. The C & O Canal reached Harpers Ferry in 1833, the B & O Railroad in 1834, and the Winchester & Potomac in 1835. These improvements connected wealthy tourists from urban areas on the east coast to Jefferson County and Shannondale Springs and the resort reopened under new management. In 1837 Samuel Lackland sold his shares to a new set of investors: Andrew Kennedy, Joseph T. Daugherty, Robert T. Brown, George W. Hammond, William Yates, John S. Gallagher, William Crow, John B. H. Fulton, and Charles G. Stewart. These men, plus James L. Ranson who still held his original share, all incorporated the Shannondale Springs Company in March 1838. They received a loan of $5000 to improve the property and they advertised the medicinal properties of the mineral springs. Visitors could take hot baths in the mineral water or cold baths in water from the river. Guests could engage in other natural pursuits included boating and fishing or quieter entertainments like writing, painting, and playing games. One notable guest, novelist Emma D. E. N. Southworth, wrote a book during her stay in the summer of 1850, titled Shannondale. At its height, Shannondale Springs also hosted parties and events for both guests and local residents.

The members of the Shannondale Springs Company were all Whig politicians and party members who were advocating for internal improvements into the western parts of the country, including the Valley. In addition to developing and advertising the springs, they also purchased land near transportation routes and made partnerships with the tourist industry in Harpers Ferry and Charles Town to bring people to the resort. Under this management the resort did well during the 1840s and early 1850s. The fortunes of the resort were largely tied to the political and economic fortunes of the investors, however, and the election of Franklin Pierce caused many of the members to lose their political appointments. As a result, the Shannondale property went up for rent in April 1855 and a month later 140 acres and the resort’s furniture were sold. In 1858 a chimney fire claimed the hotel building and a few adjacent structures and there was a sale notice of the property in 1859.

There is little information about Shannondale Springs during the Civil War years, but in 1867 the Shannondale Circuit of the Methodist Episcopal used the grounds to hold meetings and other events. Between 1868 and 1870 the property was listed on the market and it was impacted by the 1870 flood that hit Harpers Ferry. By the 1880s there were only eight cottages left standing. That decade saw another attempt at revitalizing the springs to help the local economy. Eugene Baker and J. Garland Hurst purchased Shannondale Springs in 1888 at public sale and constructed a new hotel on the location of the original. Their work was part of an effort by the Charlestown Mining, Manufacturing and Improvement Company to increase the economic prospects of the county, particularly with improving transportation and establishing new industries utilizing the local natural resources. The economic boom never occurred, and it caused the Shannondale Springs to collapse again. Baker and Hurst used the property to secure a loan for $8000 and when they defaulted on the loan the property went to public auction.

By the twentieth century the heyday of the springs was over. H. C. Getzendanner bought the property at public auction in October 1902; this included 66.5 acres at the springs, the 125-acre adjacent farm, and the ferry operation. In 1909 the hotel and one of the cottages were again destroyed by fire and the following year the farmhouse also burned down. Visitors still came to visit the springs and at times spring water was bottled and sold in Charles Town. The Getzendanners sold the entire property to E. B. Frye for $500 in 1919 and Frye largely used it to farm and graze cattle. Later in 1931, Frye gave a lease to C. L. Crane on the spring resources so that he could sell bottled spring water.

Shannondale Springs entered a new chapter in the 1930s when it was purchased by Thorton T. Perry, Sr. Prior to the purchase, in 1936, representatives from the West Virginia Geological Survey reported that there were only remains left of the cabins and that the springs were largely unprotected and dirty. The following year Perry acquired the land and his heirs later donated 580 acres to the Nature Conservancy. Ownership of Shannondale was transferred to the state of West Virginia in 1986 and is now managed by the West Virginia Division of Natural Resources. The remaining structure, a springhouse, was restored in 1997 and the property was surveyed again. There is a hope to complete future archeological digs on the property to learn more about the resort and its activity in the nineteenth century.