The Anton-Woodring House was built from 1926 to 1927 of concrete block with a brick veneer. Frederick A. Anton (1866-1944) was a German immigrant and inventor who became an American citizen in 1911. He started the Topeka Tent and Awning Company in 1901, which later became the Anton-Ackerman Company. The Antons lived in the house until 1941 when it was purchased by Harry Hines Woodring (1887-1957), the Governor of Kansas for one term ending in 1932. While the driveway begins on SW Cambridge Avenue, the house isn't visible from the surrounding roads except for glimpses from SW Gage Boulevard due to surrounding trees and houses. The house faces north and was listed in the Kansas and National historic registers in 1991.

Front (north) side of Anton-Woodring House in 1988 (KSHS) 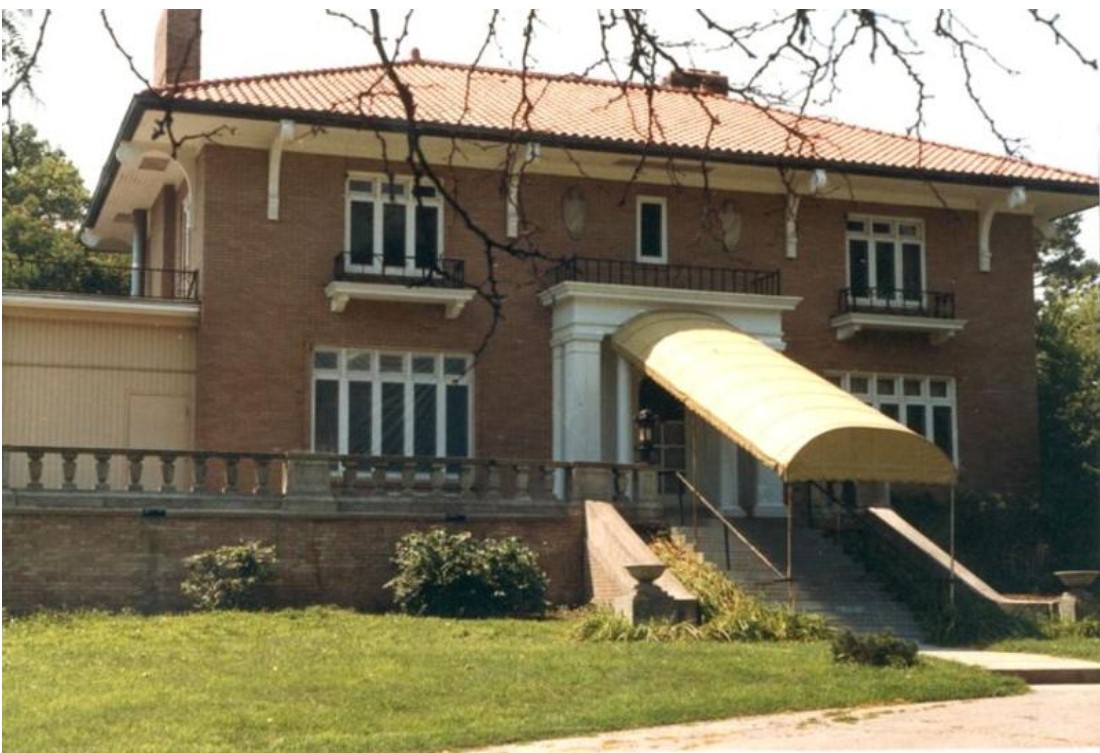 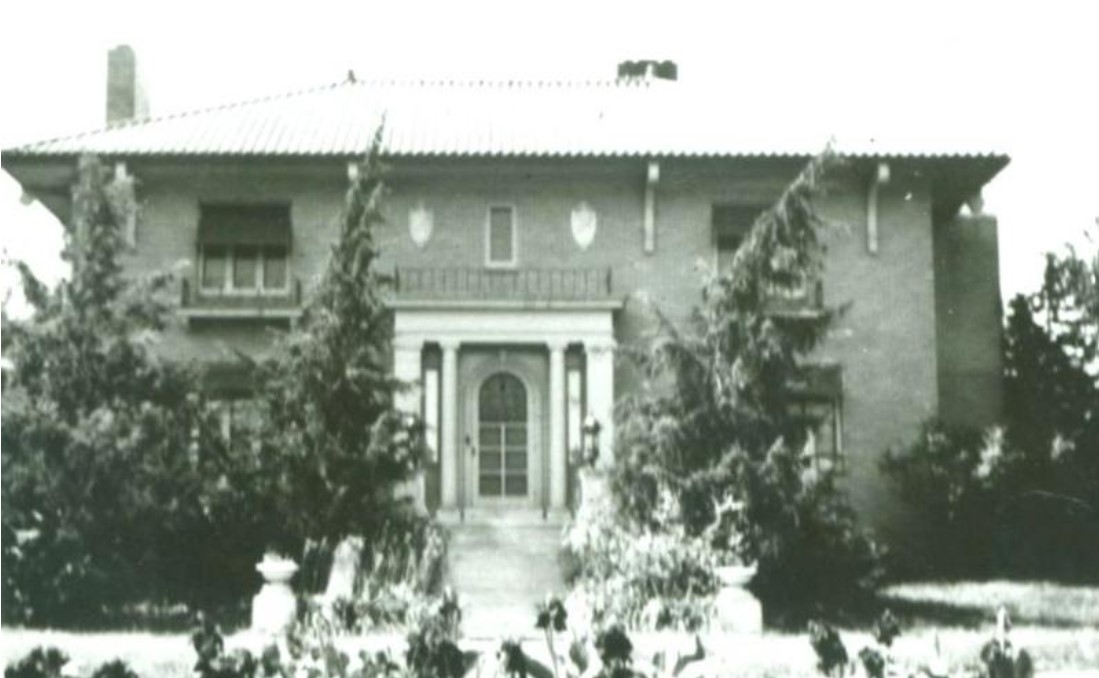 Frederick A. Anton on front steps of Anton-Woodring House in 1930 photo (KSHS) 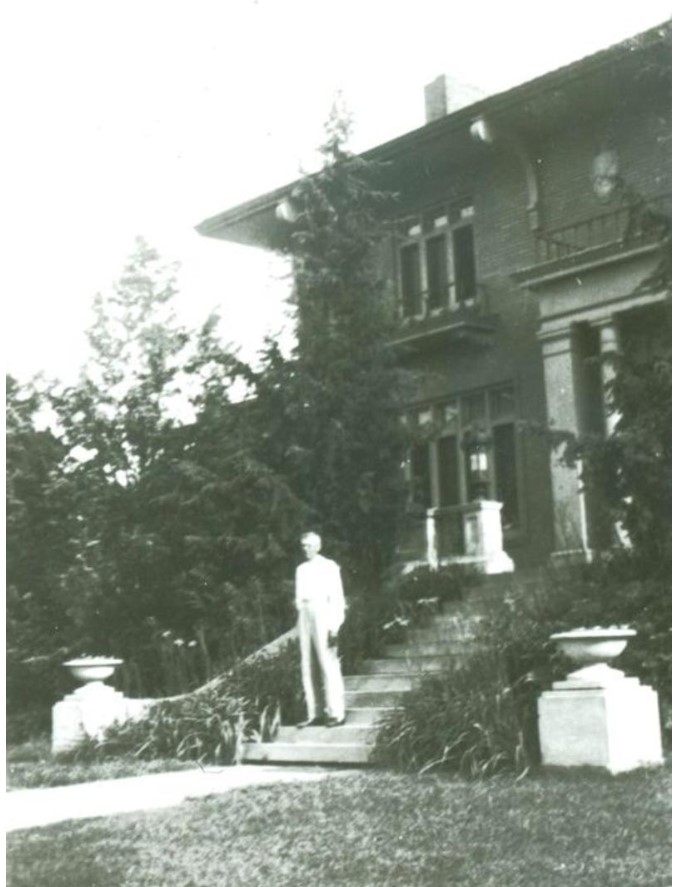 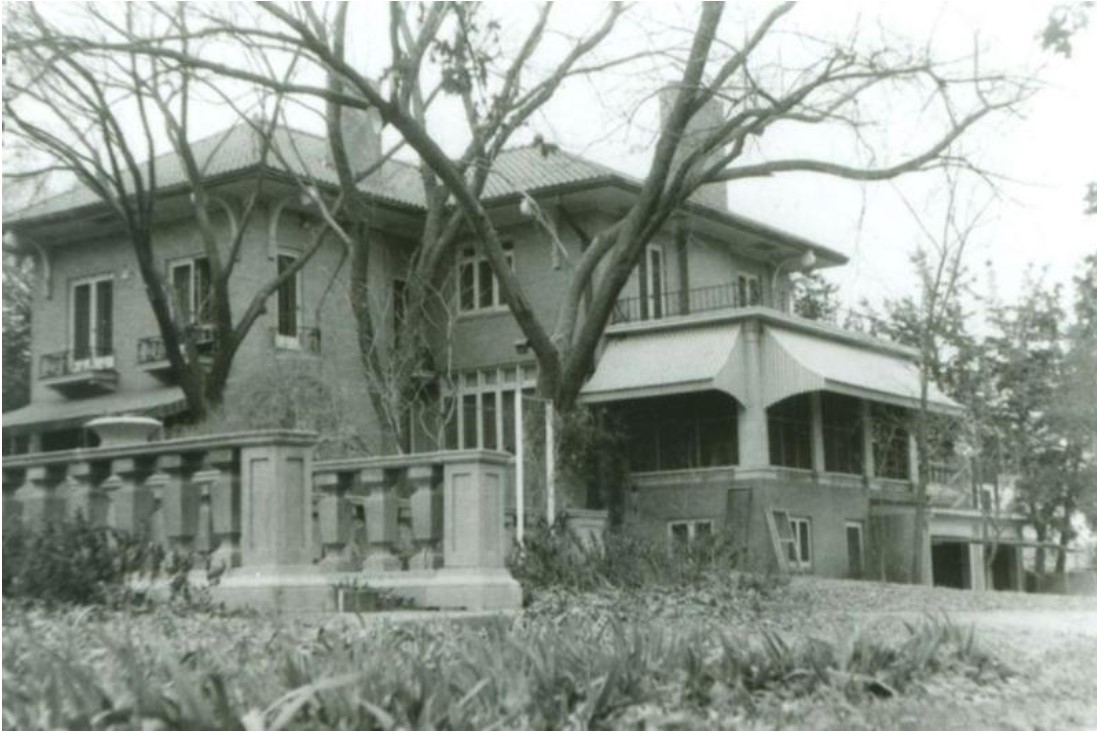 Ralph Eugene Scammell was the architect of the Italian Renaissance vernacular style home with Prairie School influences. A two-story addition was placed along the rear of the house in 1930, with a first-floor den and second-floor library; the two-story home is T-shaped in plan. The original portion of the house contained three rooms on each floor with a center hall plan. The roof is cross-hipped tile. A balustraded concrete porch abuts the home with concrete steps leading to the main entrance. The house used to stand on seven acres, and the property was known as Terrace Lake. The property is down to two acres. Most of the landscape features from the Anton era are gone. A sunporch on the east side of the house used has been bricked in, atop a two-car garage and basement room. Awnings shaded most of the windows and doors during the Anton era (until 1941). French doors lead to balconies from the second floor library.

Frederick A. Anton was one of the first Topekans to build an imposing home and lavish grounds in the city's suburbs. His factory in Topeka manufactured the hardware for tents and awnings; two factories in Arizona and California made the fabric. In 1930, only he and his wife lived in the mansion; their adult daughter and son had their own homes elsewhere. Frederick was 63 years old by 1930 and worked as the proprietor of his company; his wife, Augusta, was 57 and also a native of Germany. Frederick had come to America in 1884 and was a naturalized citizen. The house was valued at $60,000 in 1930. By 1940, the 73-year-old Anton was sharing the house with a new wife, 37-year-old Eula, an Oklahoma native; and a 24-year-old maid, Clara Schiebe. The home's estimated value had dropped to $30,000 in the 1940 census. Anton died in 1944, three years after selling the mansion.

Besides being a former Governor, Henry Hines Woodring served in the War Department under President Franklin D. Roosevelt from 1933 to 1940. While owning the mansion, he ran unsuccessfully for governor in 1946 and 1956. The outer edges of the Woodring-owned property north and east of the mansion were subdivided for residential lots in 1946 and in the 1950s. In the mid-1950s, a lake was filled in and converted into a rose garden and lawn. After the Woodring heirs ownership (after Henry's death in 1957), the house and grounds belonged to The Christian Church of Kansas from 1968 until the late 1980s; the church used the building for its offices. Donald A. and Janet Chubb purchased the house in 1988 as their residence and worked to restore the house and its landscaped grounds with its former fountains, terraced gardens, and a circular drive.

The Anton-Woodring House was deemed significant for its architectural style and for its association with Frederick A. Anton.