This may be the site of the first building on the south side of East Clayton Street. Originally the site of a soda fountain in 1989, this current building was added after 1908 but before 1913.

Athens Georgia, Corner of Clayton Street and Lumpkin circa. 1940s 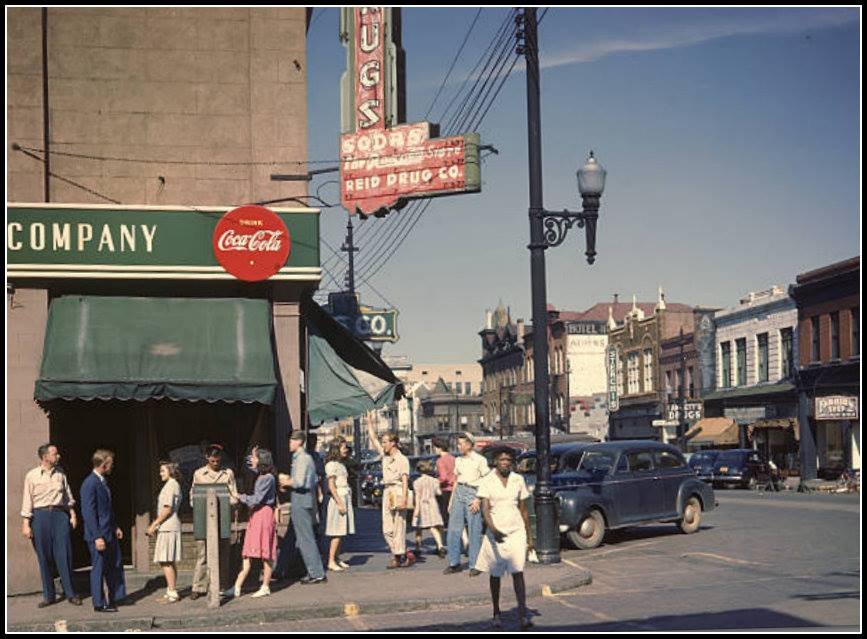 As you take a stroll through Athens today, you may notice the large brick building on Clayton street. The building may be significantly older than the surrounding buildings. The location is the site of the first building built on the south side of East Clayton street. This building is known as the Moss Scott Building, though Athenians do not refer to this building by this name. Instead, individuals who grew up in Athens remember the location as the Otasco building. The changing businesses in this building demonstrate the changes in commerce, transportation, and population in Athens over the past century.

Sanborn Fire Insurance company maps record a soda fountain in this location in the map drafted in 1898. The site was the location of a soda fountain, then a barber shop. After 1908, but before 1913 the current structure either replaced or was added on to this building. The architecture appears slightly different than the intended Beaux Arts Classicism style. Typically the Beaux Arts Classicism style features “heavier” masonry decorations. These may include quoin (dressed corner stones), columnns, or rusticated entrances. However, The architecture of the building appears “lighter” than this style. The symmetrical ornamental pieces at the top are not as thick and formal. This suggests that the building received an architectural facelift in the 1920s. The name of the building may refer to John D. Scott who also built the first auditorium in Athens further down on Clayton street.

Newspapers from the 19th and early 20th century refer to a building known as the Moss building. Moss, a family name in Athens, may explain the first name to the Moss Scott building. However, Athens directories from 1898 indicate that the Moss building was actually located on 24 E Clayton Street and served as law offices. The Moss Scott building that was a soda fountain was 28 E Clayton street before the numbering system for buildings changed to 164 E Clayton street.

Athens directories from 1926-1927 indicate that J.C. Penny’s was in the building for a short time. As the 20th century progressed the rise of the commercial mall replaced homemade goods. J.C. Penny’s moved to the corner and Sterci’s replaced this business. Sterchis as a home-goods store offered furniture, clothing, and automobile assistance. The photo included below shows Sterchis. Crymes, a home, and auto supply store, was the next business in this building. This business would supply the growing American automobile culture of the 1950s. By 1983 Otasco would replace this business. Otasco stands for Oklahoma Tire and Supply Company, so the location continued to function as a auto supply store. In 1984, Otasco was notable as the largest employee-owned companies in America. In 1988, the company filed bankruptcy and closed in 1989. Today, the structure houses Cloud, a bar frequented by college students most Friday nights. This change demonstrates the growth of the University of Georgia for the past decade and how this population change influences the city of Athens. The Moss Scott building is an interesting opportunity to contemplate the influence of classical, commercial, and college culture on the buildings in Athens.