Sites Milkhouse was built by William Sites, who was one of the first farmers of the St. Vrain Valley. He used this building to store dairy products. This building is on private property and is not open to the public. Please view from the road. 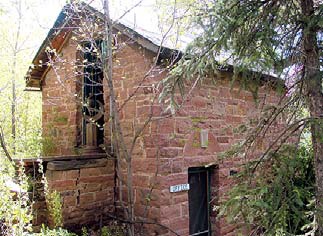 Before the quarries opened, homesteaders had been farming and working the land in the St. Vrain Valley for more than two decades. The valley had flat parcels of land as well as a river, making it an ideal location for farming. Before the homesteaders, Arapahoe and Ute tribes traveled through the valley. Teepee rings and campfire sites have previously been identified in the area. Oral histories from early settlers to the area, such as Charles Smead, mention of the presence of Native Americans.

William Sites ran a dairy farm east of Lyons. The milk from his farm was cooled by the spring water that ran through the milkhouse. Dairying was an evolving industry during the nineteenth century. While commercial dairying was becoming more common in the Northeast, in the rest of the United States “dairying was a noncommercial activity performed to provide milk, butter, and cheese for the farm family. The rural character of most areas kept local markets small and the perishability of milk and poor, non-refrigerated transport prevented much expansion beyond local markets.”1 William Sites would have most likely been supplying only locals with his milk due to the difficulty of transporting it to Longmont or anywhere else in Boulder County. However, due to improvements in American dairying between 1850 and 1910, he may have had a well-producing farm.

Even though “farmers throughout the country continued to prefer--often quite rationally, given their economic goals and conditions--beef-bred or dual-purpose beef-dairy breeds (for example Shorthorns or Devons) whose potential milk yields were considerably lower than specialized dairy cattle,” they had improved feeding techniques.2 By 1910, American dairy farmers had adopted a scientific approach to feeding their cattle, rather than relying on pastorage alone. Commercialized feed became available for purchase and dairy farmers were able to create a balanced diet for their herds. Milk-producing animals require a base number of calories for body maintenance, feed consumed beyond that point is converted into milk. Therefore a balanced diet can increase cows milk production without leading to an increase in the animals’ body weight.3 A dairy farm in Lyons would have needed high production to serve the number of families who had moved to the area to work in the quarries.

Site’s sold the property to Pioneer John Reese’s son Frank Reese. His sister, Bertha, was married to James Albert McConnell. The two-story building was used for storage and then living quarters. Since then, the Sites Milkhouse has been on private property.