Built in 1900, the W.A. Young and Sons Foundry and Machine Shop is regarded as one of the best-preserved examples of a small industrial machine shop in the United States. Operated primarily by William Young and his two sons, the machine shop produced metal tools, equipment and replacement parts for boats, coal mining equipment, railroads and local businesses. It occupied a valuable niche between the vanishing Blacksmith shops and larger mass production plants. The shop closed its doors in 1965 and was acquired by the Greene County Historical Society in 1985. It was then sold to the Steel Industry Heritage Corporation, which has since become the Rivers of Steel. The shop was designated a National Historic Landmark in 2016 and is open for tours most Sundays.

The W.A. Young and Sons Foundry and Machine Shop has sat along the Monongahela River for over 120 years. 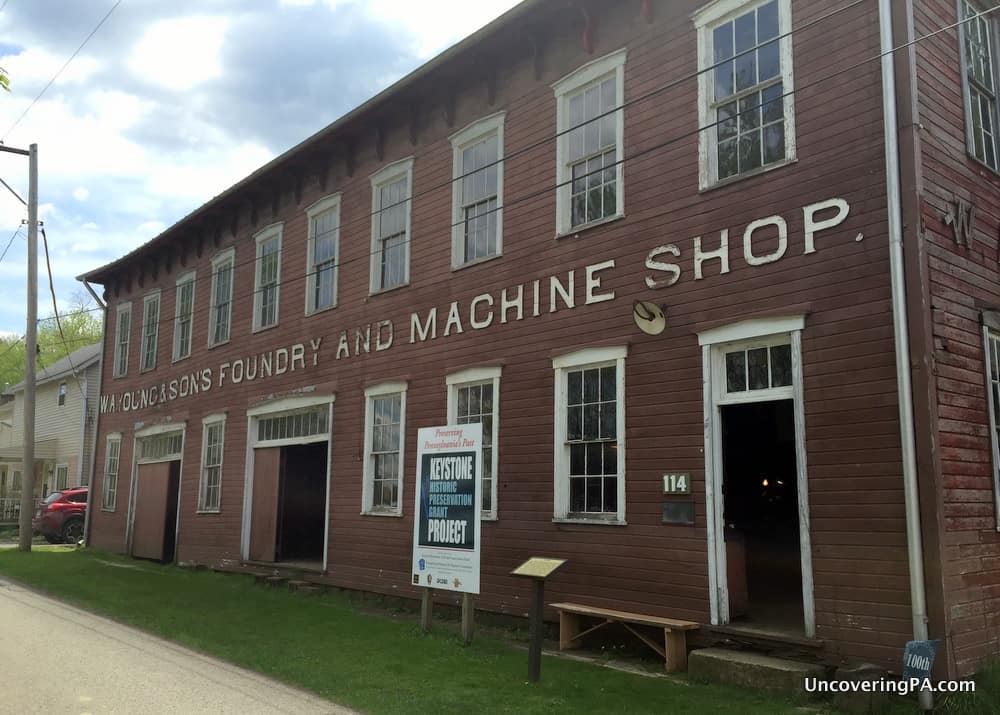 The machine shop is a popular destination for industrial photography tours. 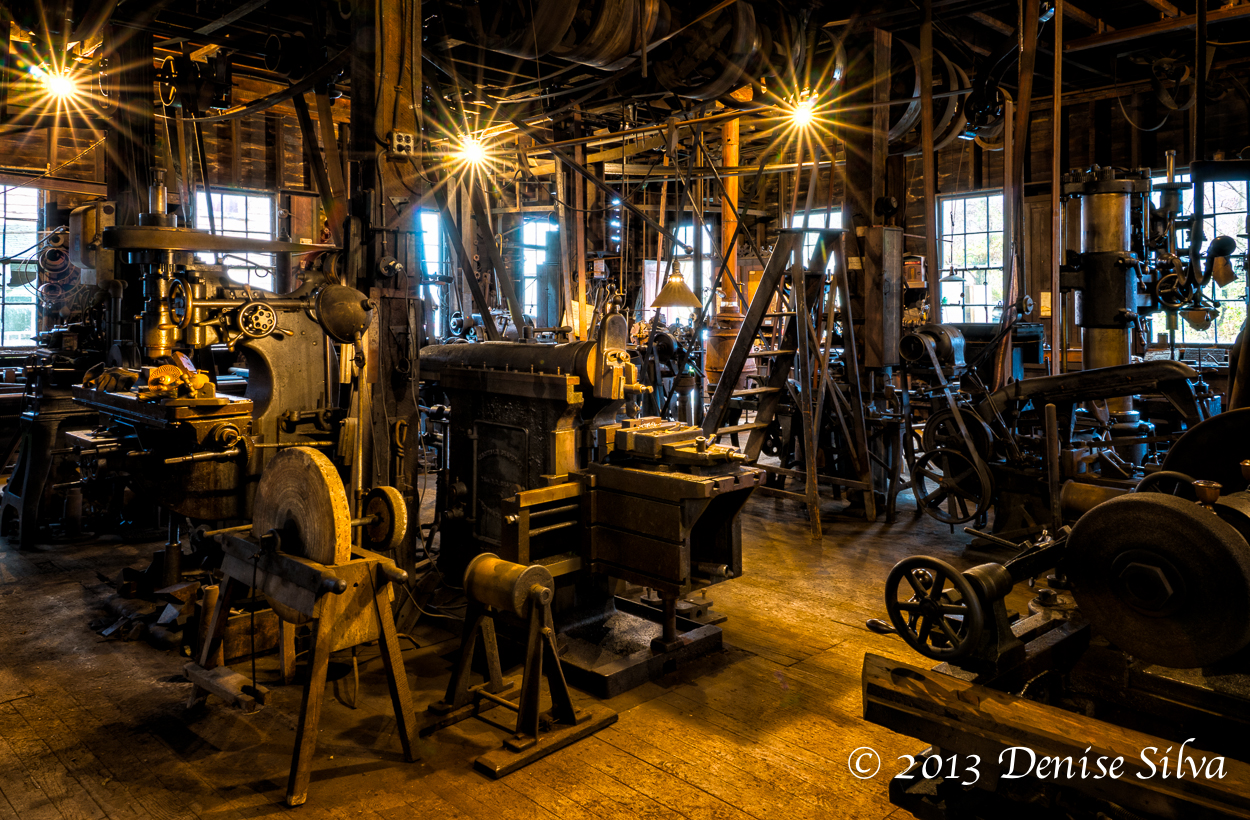 Young;s adding machine and typewriter were left behind, like most of its tools and machines, when it ceased operations in 1965. 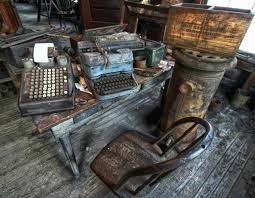 This photo shows the belt system used to run the various machines within the shop. 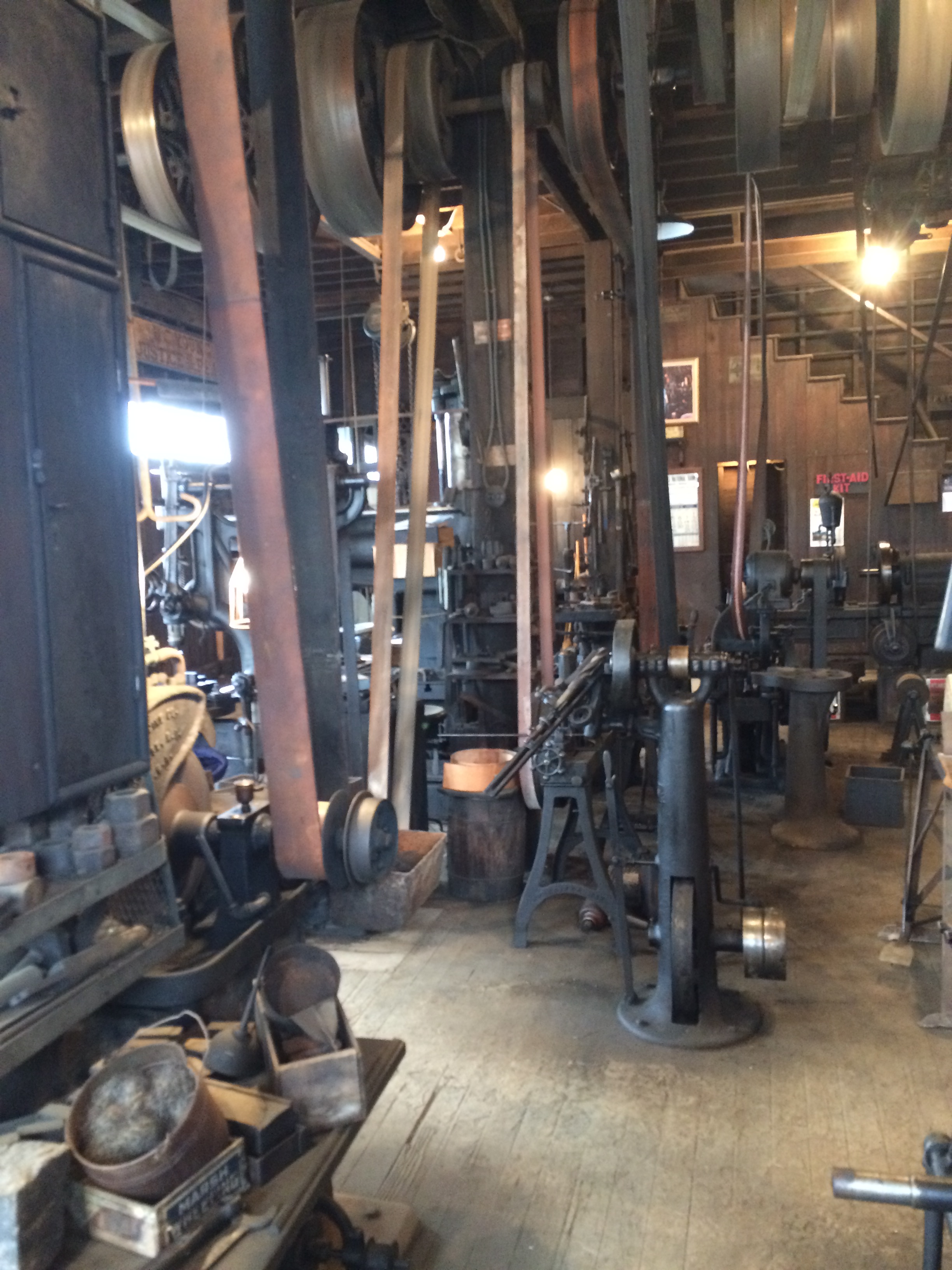 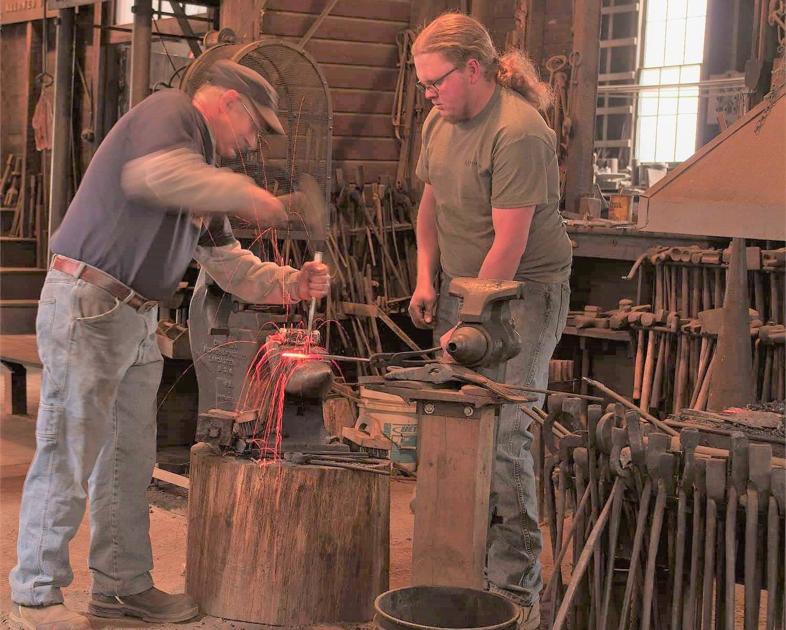 William Young chose the banks of the Monongahela River to build his machine shop and, later, foundry. Rice’s Landing, by 1900, had become an important port community along the river that shipped supplies and people north to Pittsburgh and beyond via the Ohio River. Williams began with just the machine shop, which is a two-story, wood framed building with clapboard siding in 1900. The Youngs built a line shaft driven system for their drill presses, lathes, planers, grinders, and shapers. This steam-powered system eventually ran 25 belt-driven machines that could be engaged on an individual basis. The single steam engine was replaced by an electrical one in 1928 and by a gasoline engine later.

In 1908, Young built an attached foundry at the rear of the machine shop and used it to create custom made tools and fittings for local clients. He and his sons also added a third building, the “back shop” some time after the foundry. At some point, the family converted the second floor above the machine shop into a hardware store which sold items made in their foundry to the local community.  Over the course of its 65 years, the machine shop and foundry made items as varied as bolts, bronze castings, massive gears, and locomotive wheels.

In 1940, William Young died and the shop and foundry were operated by his two sons, Walter and Carl until it ceased operations in 1965. What makes the Young's shop so historically unique is the fact that when it closed, all its machines, tools and archival records were left behind, as if workers would someday return. After it closed, the shop sat vacant for the next two decades and fell into a state of disrepair until it was purchased by the Greene County Historical Society in 1985. The historical society performed some repairs to the buildings and opened it for occasional tours. However, they were unable to provide the necessary and expensive repairs to the buildings’ roofs and foundations.

That is when the Steel Industry Heritage Corporation stepped in and purchased the Young Machine Shop and Foundry in 2009. Rivers of Steel, as it is now known, was founded back in 1992, just after the local steel economy collapsed, by a group who feared the area’s industrial and cultural heritage would be forgotten. The non-profit organization still “…supports economic revitalization, [seeks to] deepen community partnerships, promote heritage tourism, and preserve local recreational and cultural resources for further generations.” They are responsible for creating the Rivers of Steel National Heritage Area in southwestern Pennsylvania and the Young Machine Shop has since become part of it. Rivers of Steel also owns the Carrie Blast Furnaces in Swissvale, the Bost Building, Pump House and Water Tower in Homestead, and the Explorer River Boat which docks at Pittsburgh’s North Shore and hosts tourist and educational trips on the area’s extensive river system.

In 2016, Rivers of Steel secured grants which it used to provide the machine shop with much needed repairs. The building’s gutters and downspouts, clapboard siding, roof truss and rotted window frames all were replaced and its foundation was stabilized. Today, the machine shop looks as it did when it was shuttered back in 1965. Most of its machines and tools date from 1870-1920 and remain operational. There are no displays behind glass or pristine exhibits. However, there is the smell of oil and the sound of industry when a guide fires up the gas engine and engages the belts that still run the machines. The foundry’s floor is still dirt, with casting sand strewn about and its coke-fired furnace intact. The shop is open most Sundays (call ahead during winter months) and local metal workers operate the machines and foundry during its annual Hammer-In Festival the third Saturday in April.