Man Mound, located within Man Mound Park, which was established in 1908 is a prehistoric humanoid earthwork, the last of its kind in North America. It is thought that the earthwork was constructed during the late Woodland Period, between 600 and 900 CE. The mound depicts a human figure walking with either a horned head or wearing a horned headdress. Prior to having its legs and feet removed by a road, it measured 214 feet long with a height of 2.5 feet. Man Mound is believed to have either religious or cultural significance to those who built it and is perhaps a burial mound, although it has never been excavated. Man Mound was designated a National Historic Landmark in 2016.

An aerial view of Man Mound after the annual burning of the brush from its surface. 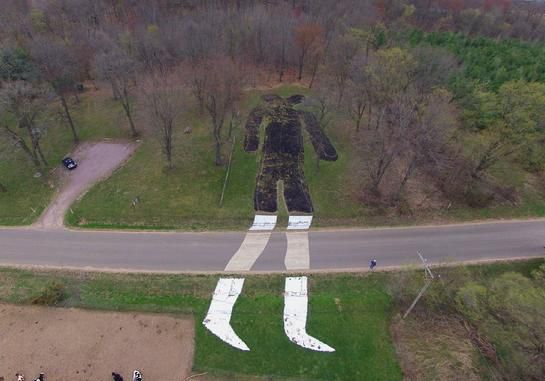 A ground level photo of Man Mound taken from its head. 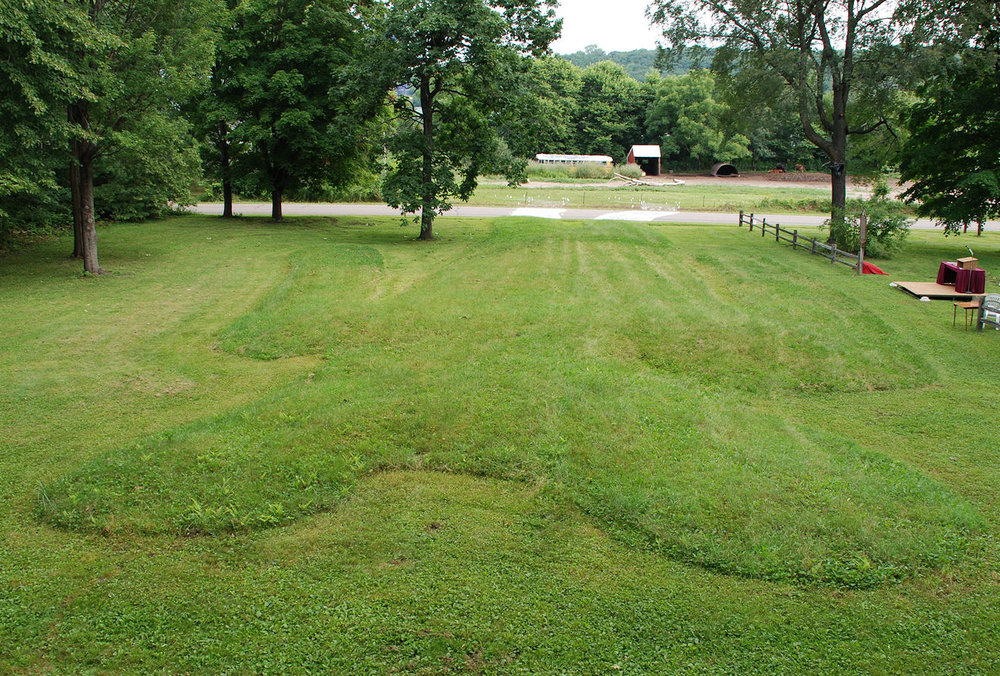 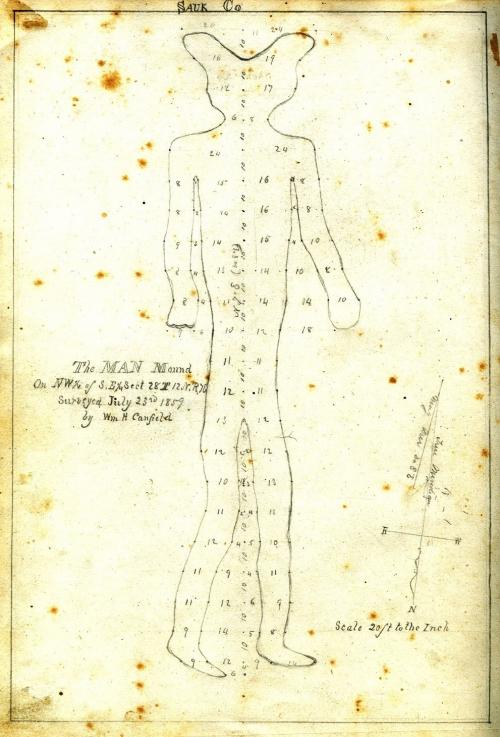 The 1908 dedication of Man Mound Park. 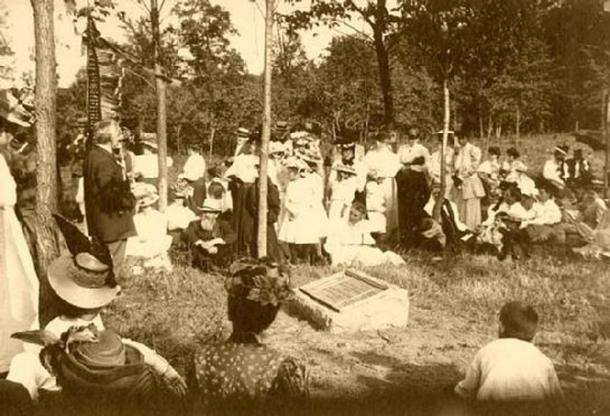 The historical marker for Man Mound. 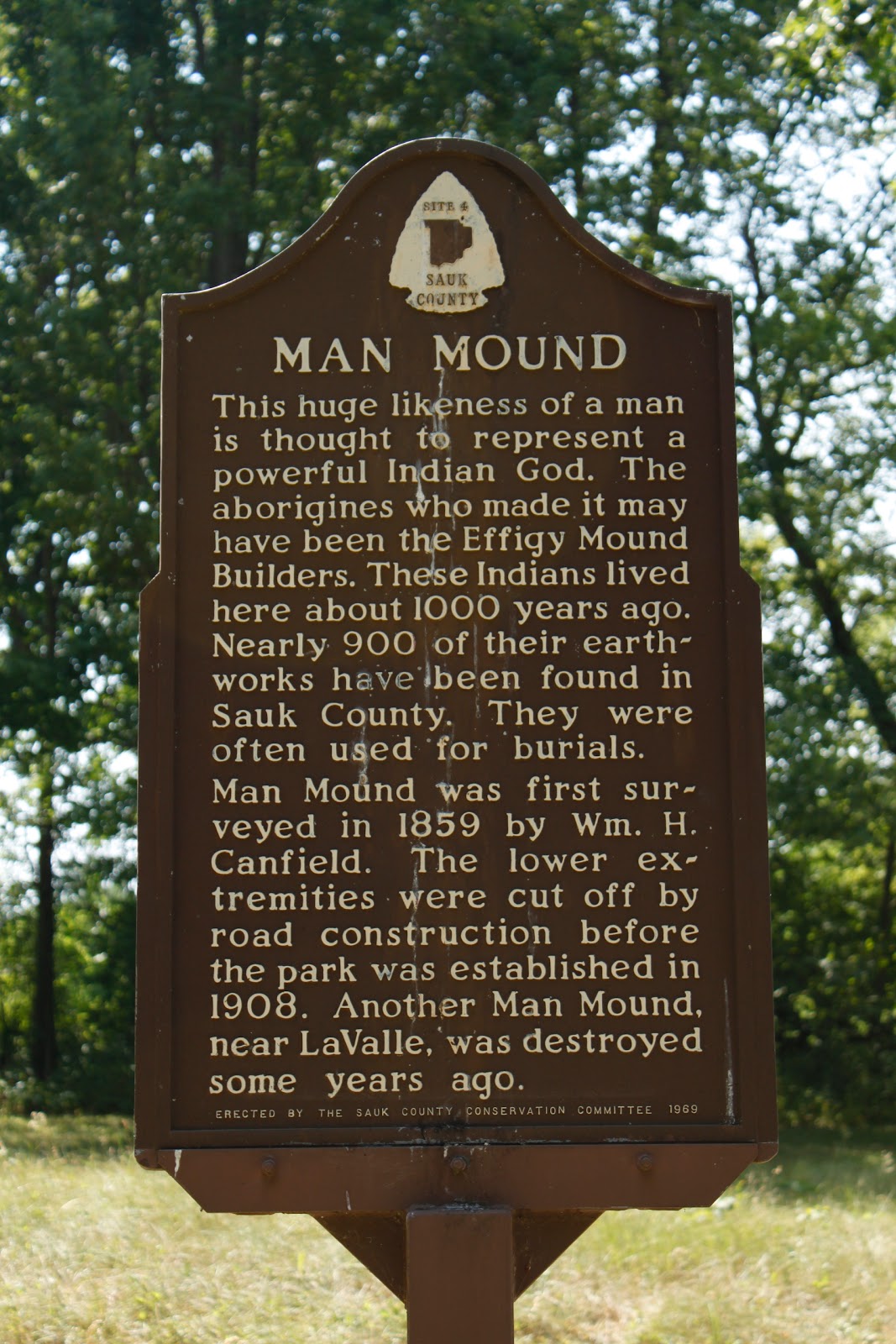 Most associate National Historic Landmarks with structures of some kind. However, the Department of the Interior occasionally designates non-structures, such as archaeological sites, and Man Mound is such an example. While there is some disagreement, the Woodland Period of prehistory in North America ran from roughly 500 BCE until European contact in the early 16th century. The period covers different years in different areas, with the late Woodland Period in what is now Wisconsin, covering the years 100 CE to about 1200 CE. It is considered a developmental stage that bridged the gap for some cultures between a hunter-gatherer stage and an agricultural stage. Aside from cultures becoming more settled due to agriculture, they also adopted and expanded the use of pottery, more permanent structures, better weapons (bow and arrow) and mound building.

The mounds built in the upper-midwestern section of the country fell into three broad categories, conical, for family burials; flat-topped or platform-shaped for chiefly homes or religious ceremonies; and effigy mounds, of which almost all were in the form of animals. However, there have been a few mounds in humanoid form discovered in North America and all, except for Man Mound, exist no longer. These cultures were prodigious mound builders. It is estimated that over 14,000 were constructed in southern Wisconsin, eastern Iowa, southwest Minnesota, and northern Illinois. Over 900 mounds existed in Sauk County alone, where Man Mound is located. Unfortunately, the vast majority of those mounds have been destroyed by construction, farming and flooding.

In 1859, William Canfield, a land surveyor, became the first non-Native American to identify Man Mound. Canfield then reported his finding and survey to naturalist, Increase Mather, who published Canfield’s discovery in a journal article the same year. Canfield described a mound, in human form, that was 214 feet long and 48 feet wide with a head that was 30 feet long, a body 100 feet in length and legs 84 feet long. Initial interest in the Man Mound was significant but waned by the late 19th century and Man Mound faded into obscurity once again.

In 1905, a historian, H.E. Cole, and a high school science teacher who was also a member of the Wisconsin Archaeological Society, Arlow Stout, surveyed Man Mound again and discovered the landowner planned to plow it under for farmland. The two, with the help of the Wisconsin Archaeological Society and the Sauk County Historical Society, were able to convince the local community to raise money to purchase the land to save Man Mound. The land was purchased for $225 and was established as a county park in 1908, but not before the lower half of Man Mound’s legs were destroyed in 1905 by the construction of what has come to be known as, ironically, Man Mound Road. Its feet, which extended into a field across the road, were also destroyed. Since the mound was overgrown, trees and brush were removed, and an observation tower was constructed to provide a better view of Man Mound. The park has since doubled in size.

In 2008, in celebration of the Man Mound Park’s centennial, the effigy’s legs were painted on the road where they once were, and its feet were re-established in the field across the road. Today, Man Mound is owned by the Sauk County Historical Society and managed by the Sauk County Parks and Recreation Department.