The Alva Kitselman House is a two-and-a-half story Colonial Revival style mansion which faces south toward University Avenue , set back on an 8-acre tract that once was a 25-acre estate. The opulent house was commissioned in 1913 and completed in 1915 and has been described as being flamboyant and ostentatious. The Kitselman family lived here until the mid-1930s and the property was vacant until sold in 1950 by his widow. It became a church property, Hazelwood Christian Church, in 1951. A new church was built next to the mansion in 1956. In 1994, the Alva Kitselman House was listed in the National Register of Historic Places. The church planned to sell the mansion to a local salon business who intended to convert the interior into a high end beauty salon and spa.

2012 photo of front of Alva Kitselman House, when was part of Hazelwild Christian Church property (nyttend) 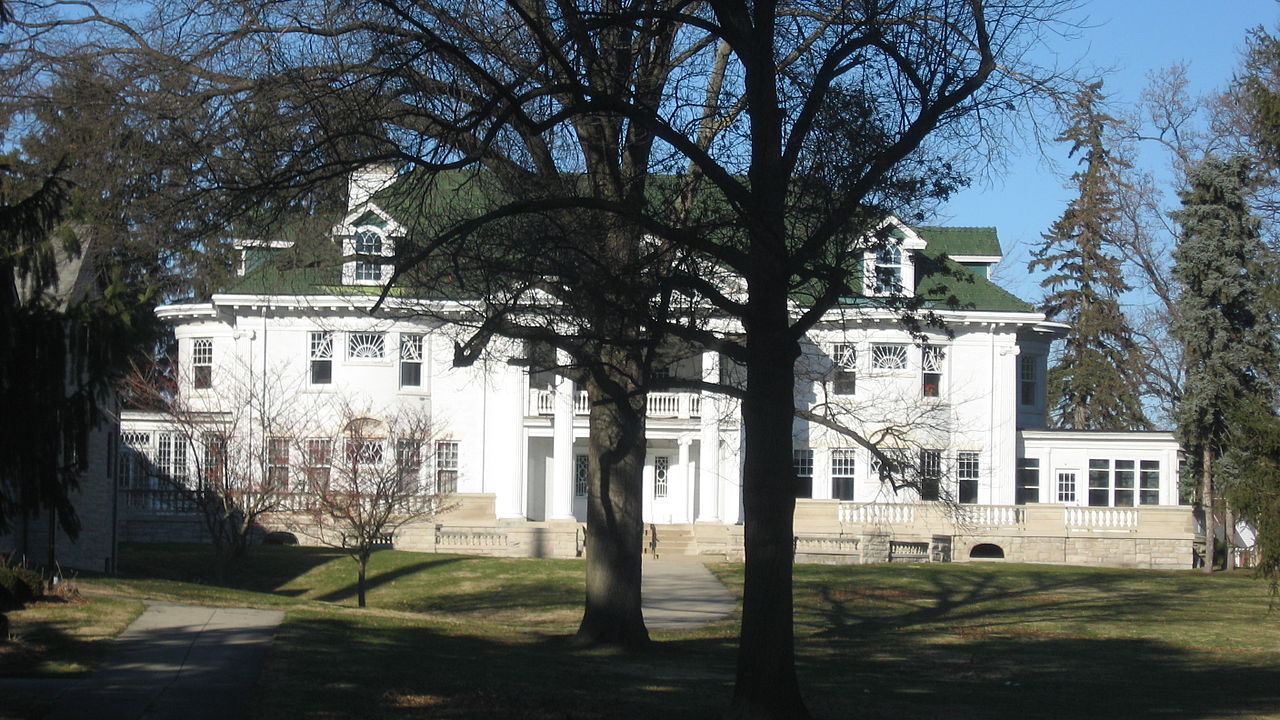 The Alva Kitselman House is one of the best-preserved high style mansions in the county from the early twentieth century. It rests upon a limestone foundation and is constructed of unusual and expensive materials. The exterior walls of white glazed brick. Curved bricks were molded to follow the shape of the bowed bays. Sills and lintels are of dressed grey marble, which, along with the glazed brick, may have been imported from Italy. The front portico features wooden columns painted white with a tympanum of stucco painted green. The hipped roof was covered with green glazed terra cotta tiles. A pair of two-story bay windows flank the entrance.

Alva Salle Kitselman was a successful businessman who owned a roller skate factory and other businesses. He patented the ball bearing that went into making roller skates. He made a fortune by patenting a machine to weave wire fencing, "The Duplex," in 1887. He and his three brothers founded the Kitselman Wire fence Company to sell the device and finished fencing. The factory moved from Randolph to Muncie in 1900. The brothers formed a new firm in 1904 to sell telephone, telegraph, and barbed wire, known as the Indiana Steel & Wire Company. Alva served as president of both family businesses into the 1930s.

Alva Kitselman and his bride, Leslie Curtis, reportedly saw a house on their honeymoon in 1912 that served as the inspiration for the mansion. They named the house "Hazelwood" due to the hazelnut trees on the property. The property's landscaping was on a grand scale as well. A man-made pond with a lighted fountain reflected the front of the house and was home to swans. An ailee to the house was planted lined with 90 imported elm trees. Peacocks roamed the grounds of a formal garden, supplied by a greenhouse on the property. Behind the house was a large garden for the kitchen and livestock. A barn and water tower, also of the fancy glazed brick, once stood on the grounds. A carriage house also remained on the property in the 1990s and was a contributing structure to the property's significance.

The Kitselman family resided in the mansion until the mid-1930s when Alva's poor health prompted a move to California. Kitselman died in 1940 and his widow sold the vacant house and property to developers in 1950. All but the eight acres at the core along University Avenue were soon developed with streets and residential lots. One lot was purchased by the Jackson Street Christian Church with intentions to build a church. When church trustees realized that no one had come forward to buy the mansion and its eight acres, they offered to trade their lot to the developers for the mansion tract, saving the building from possible demolition. The church changed their name to Hazelwood Christian Church after acquiring the property in October 1951; the first church service was held a year later. A new church was built next to the mansion in 1956, and the mansion became their fellowship hall, containing classrooms and offices. The carriage house was renovated into a pastor's residence and the greenhouse was removed. The 1956 church is not a contributing structure to the National Register nomination, since it is a newer, religious structure that was not present during the Kitselman family era of residence.

The Hazelwood Christian Church and Parlor Salon, LLC, applied for a zoning variance in 2017, to convert the mansion into a spa; they planned for a "salon, spa, wellness center, sign and one apartment" in the historic home. The spa and the church were to share the ingress and egress routes. Members of the Riverside Normal City Neighborhood Association, who had been using the house as a clubhouse, agreed, and the variance was granted.