The Cleveland Harbor West Pierhead Lighthouse is not open to the public. But it it is available to see from a distance, from tour boats or land locations such as Wendy Park and Cleveland Metroparks Lakefront. The lighthouse was built in 1911 and automated in 1965. It also housed a U.S. Coast Guard Station until 1976. Other structures on the site include a steel sound signal building constructed in 1916 and a radio beacon. Today, it freezes over every year, creating a majestic appearance that resembles that of an ice castle. It is listed on the National Register of Historic Places.

The lighthouse on a sunny day! 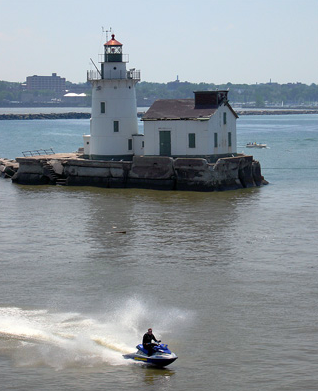 The Cleveland Harbor West Pierhead Lighthouse was built in 1911. With some structures from land beginning to extend outwards more into Lake Erie, it became important to build some more lighthouses farther out in order to warn boats that they were passing by dry land. The lighthouse is not open to the public, but it can be viewed from cruise boats and other public areas, such as the nearby Wendy Park. The lightthouse is located at the end of a 4-mile long concrete pier. The West Pierhead and East Pierhead lighthouses were built at the same time to guide ships to the entrance of Cleveland Harbor and the Cuyahoga River. A light station had existed in the area since 1831.

Attached to the 67-foot steel tower is a one and a half story iron fog signal building that was also built in 1911. The keeper's quarters are included in the tower. Other structures on the site include a steel sound signal building constructed in 1916 and a radio beacon. The tower was originally fitted with a fourth order Fresnel lens. Fresnel lenses concentrate the light from a single source to make it much brighter and were originally created for lighthouses in the 1800s. When this lighthouse was automated in 1965, its Fresnel lens became unnecessary. Eventually, the lens was donated to the Great Lakes Science Center, where it is on display for visitors to see.

In addition to its history, the lighthouse is also known at wintertime for its natural and spectacular transformation into what looks like a majestic ice castle! Every year since 2010, the water that splashes up onto the lighthouse has completely frozen over. While this provides wonderful photo opportunities for tourists, those who are navigating the icy waters may find it inconvenient...Even today, the now-automated lighthouse flashes every five seconds in order to warn people that they are nearing the Port of Cleveland: Despite its age, this is still a working lighthouse.