Fannie Sellins was a union organizer who literally fought to the death for workers’ rights. She was assigned to the Allegheny River Valley while involved with the United Mine Workers of America to direct picketing by striking miners at the Allegheny Coal and Coke Company. On August 26, 1919, She witnessed Joseph Starzeleski being beaten by guards, and when she intervened, was shot dead by deputies on the scene. The coroner ruled that it was a justifiable homicide, stating that Sellins was inciting a riot. A Historical Marker, and memorial were placed at the Union Cemetery in Arnold, Pennsylvania to honor her life.

Historical Marker erected in 1989, Found along Freeport road as it borders the Union Cemetery in Arnold, Pennsylvania 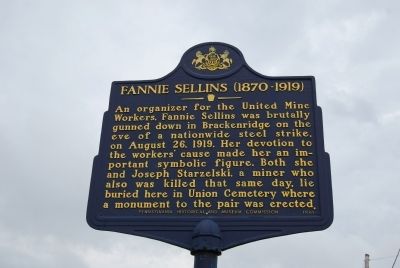 Front of memorial found in Union Cemetery in Arnold, Pennsylvania 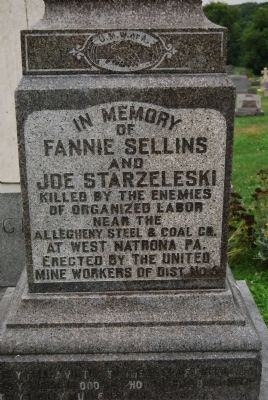 Back of memorial for Fannie Sellins found in Union Cemetery in Arnold, Pennsylvania 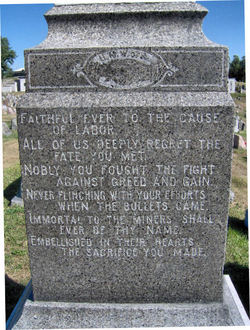 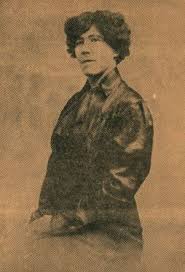 Picture of garment workers on strike 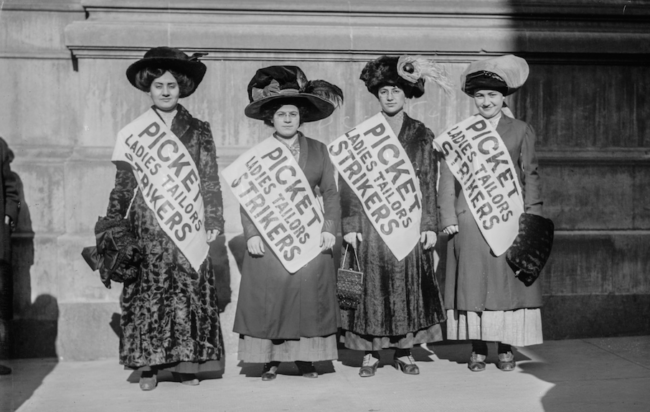 Fannie Mooney was born in New Orleans in 1872. She married Charles Sellins, a garment worker in St. Louis, Missouri. She was forced to take a job in a garment shop following the death of her husband to support herself and four children. That very garment factory in 1913 became the birthplace of her fervor for organization. She became union leader of the factory and organized 400 women who were locked from the factory.

Following her work in St. Louis and a stint in Chicago, she was hired by the United Mine Workers and moved to Pittsburgh in 1913. In February of 1914, in Colliers, West Virginia, she addressed 6,000 miners and while facing being arrested said, “a jail sentence holds no terror for me.” She cited her right as an American to speak for justice, “I am free and have a right to talk or walk any place in this country as long as I obey the law. I have done nothing wrong.

In the summer of 1919, Sellins was assigned to the Allegheny Valley to direct picketing for striking miners at Allegheny Coal and Coke. The United Mine Workers Journal called Sellins an "Angel of Mercy," who went into the miners' homes, talking to their wives, taking care of their sick, and helping them in other ways. On August 26, 1919. A little while before the night shift began at the Allegheny Steel Company at West Natrona, Pennsylvania, Sellins was murdered. She was 47 years old. Also killed was Joseph Starzeleski. Accounts of what led up to the killings are contradictory.

In 1920, the United Mine Workers of America District 5 members erected a memorial at Sellins' grave in Union Cemetery at Arnold, Pennsylvania. The inscription reads:

"In Memory of Fannie Sellins and Joe Starzeleski, killed by the enemies of organized labor, near the Allegheny Steel and Coal Company, at West Natrona, Pa." Area miners, steelworkers, and other union workers have conducted memorial services, labor day celebrations, and other special events at the memorial site over the years since then. In 1989, 70 years after her death, Sellins' grave was designated a Pennsylvania state historic landmark and a historical marker was erected.

Pittsburgh has a particularly bloody history when it comes to labor disputes. Fannie Sellins’ fought tirelessly for immigrant laborers, American laborers, and union workers to try and improve working conditions for all. Losing her husband and having to support her four children thrust her into the labor force where she realized there were major problems. She took the experience and her dedication, and it propelled her through to the end of her life. Labor laws in America were forced to change thanks to people like Sellins, how made the ultimate sacrifice supporting her cause. She along with many others who lost their lives are who Americans celebrate on Labor Day.