Agriculture has always been Licking County's largest industry because of its rich, fertile soil. Appleton Downer, writing to his family in 1815, said the the area is "...beautiful country rich and level, but not much cleared." Over the next few decades, this situation rapidly changed as numerous gristmills across the country processed raw materials grown on the farm into marketable products. A visitor to Bowling Green Township in 1840 wrote, "The extensive meadows-pastures-cornfields- the numerous herds of cattle, swine and sheep - with such flourishing orchards - renders the view in this township very pleasing. The formation of the Licking County Agricultural Society in 1832 helped to further the area's agricultural interests. Among other pursuits, the society organized annual fairs. The arrival of the Ohio and Erie Canal, the National Road, and later the railroads allowed area farmers access to distant markets. A market house, established in Newark during the 1820's, promoted the sales of local agricultural products brought to market.

These tools, including the corn sheller, lard press, sausage grinder, and plow were used on farms in Licking County. 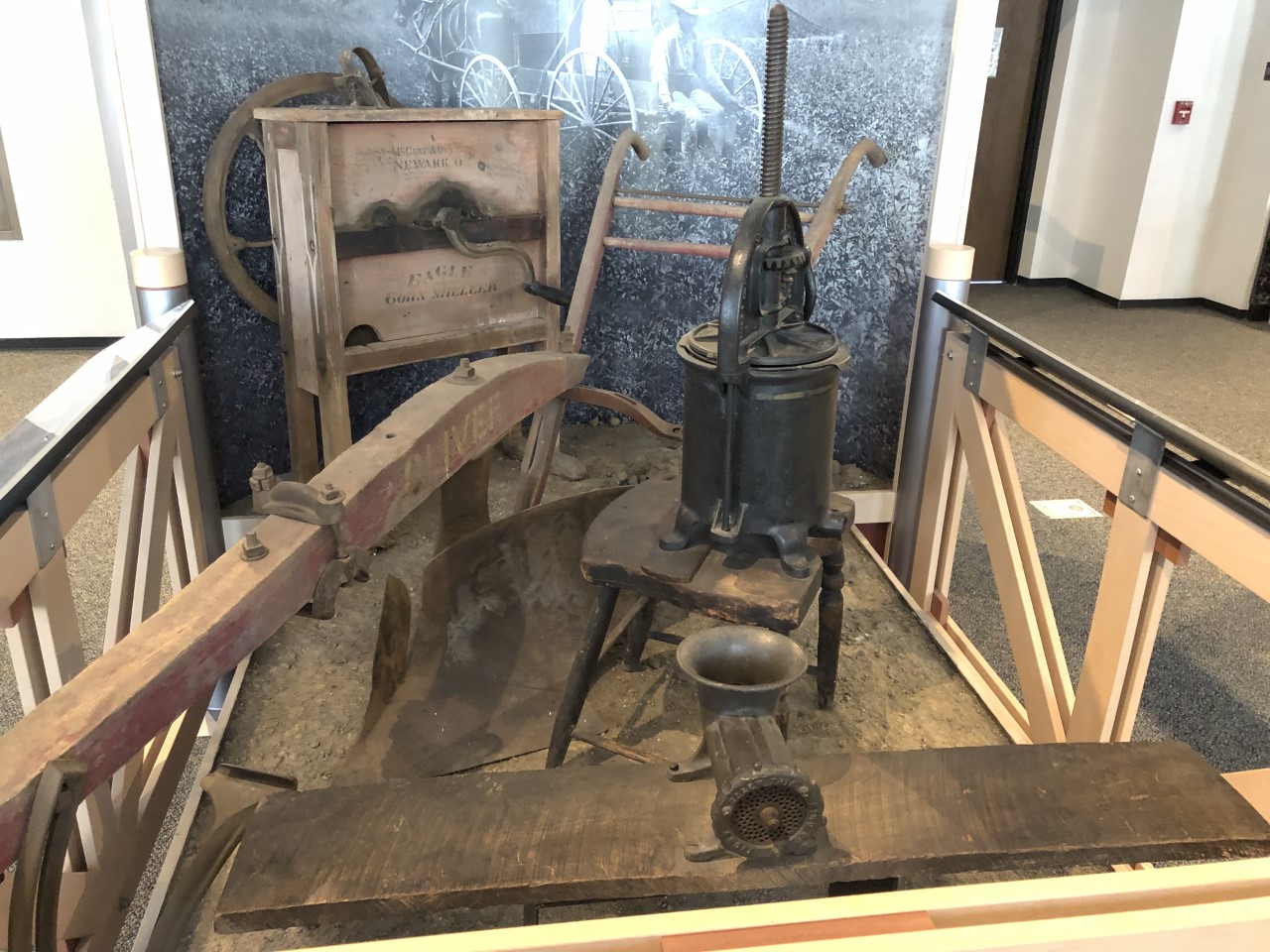 The lard press was attached to the seat of a chair to give it a permanent base. 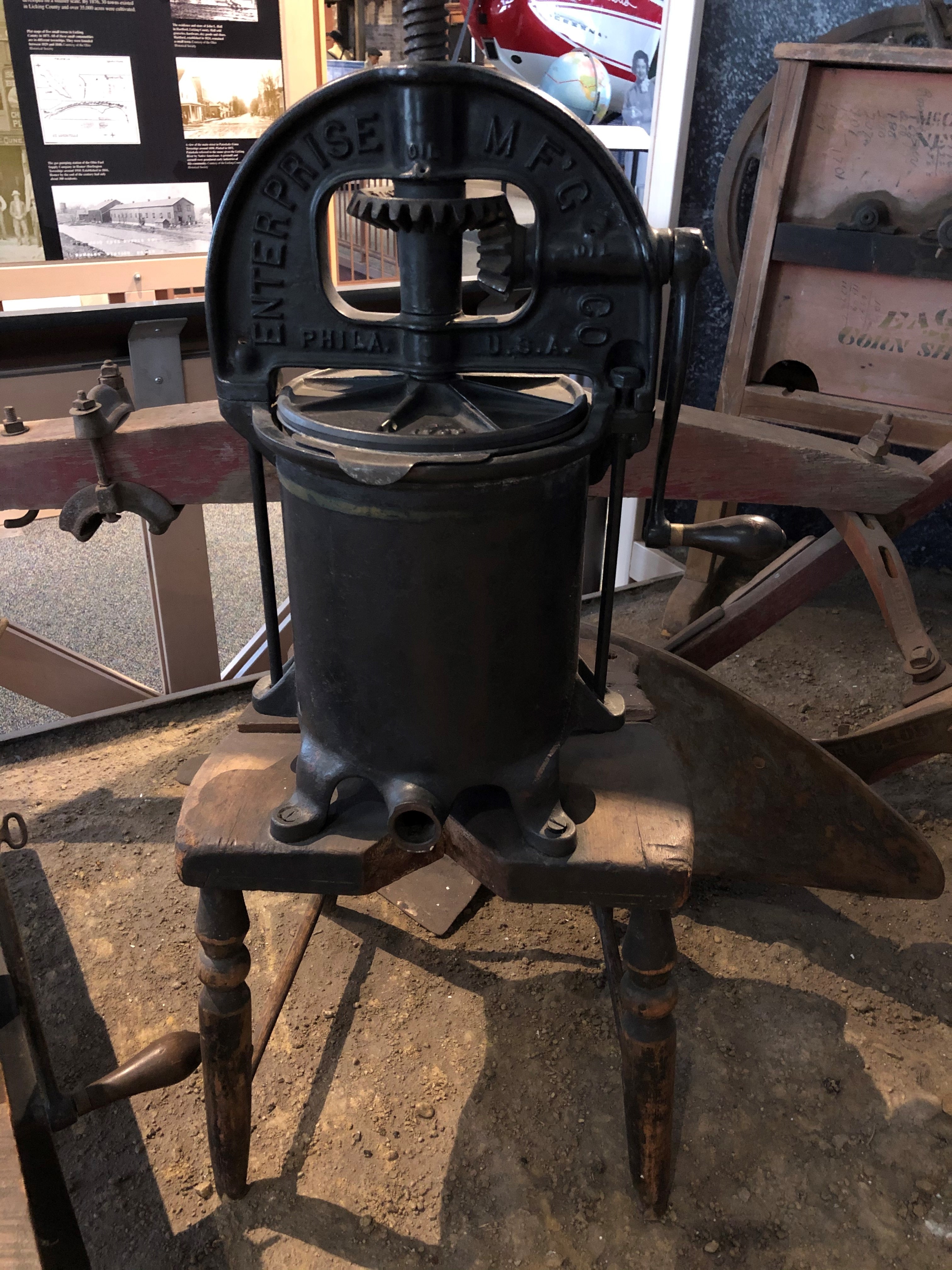 A meat grinder like this one would have been a necessary item for farming families wishing to process some of their meat into sausage. 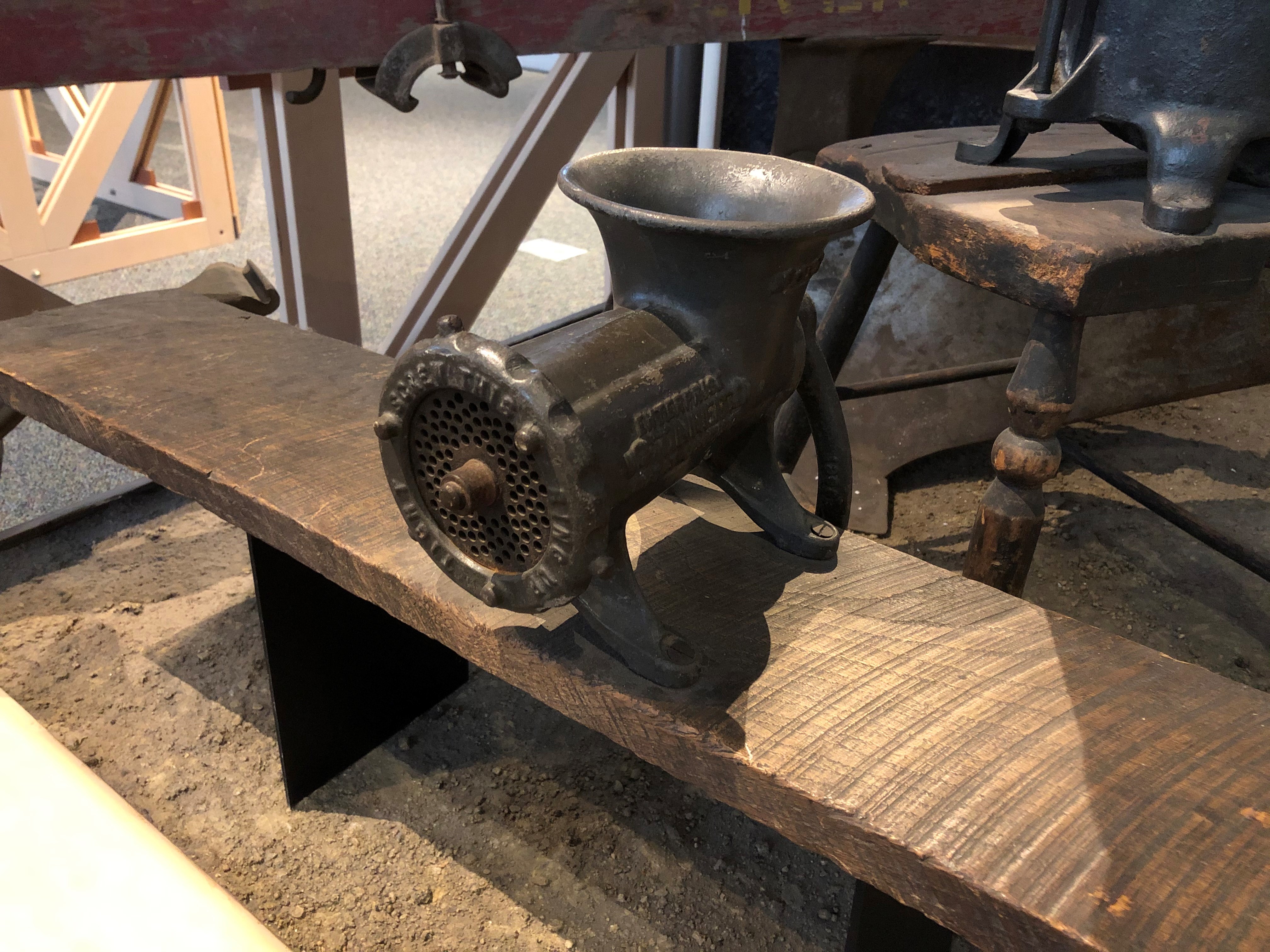 The corn sheller was sold by McCune & Owens in Newark. 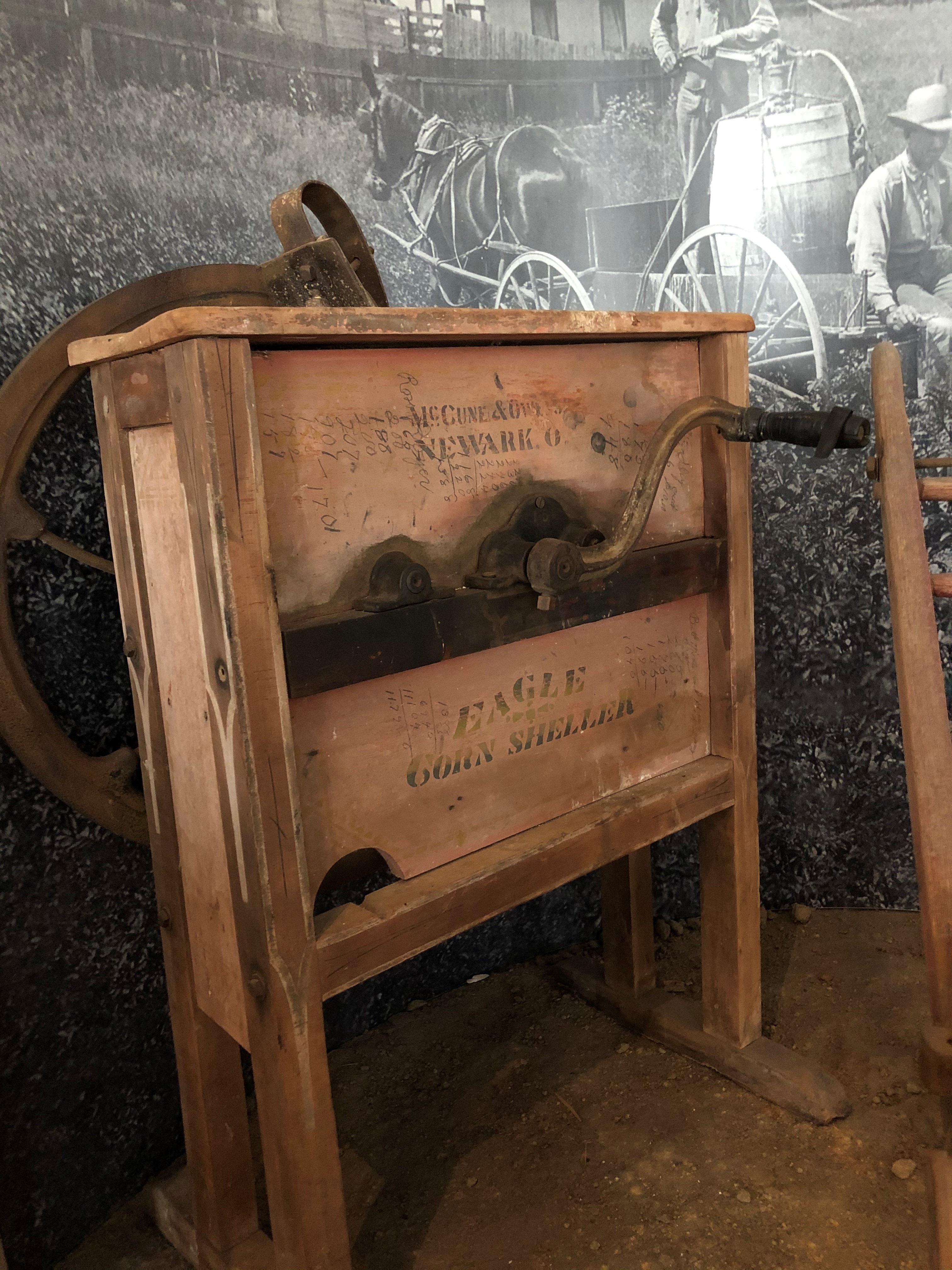 As you can see from this 1870 map of Newark, much of what is now part of the city was once open farmland. Much of the city's economy was associated with agriculture. 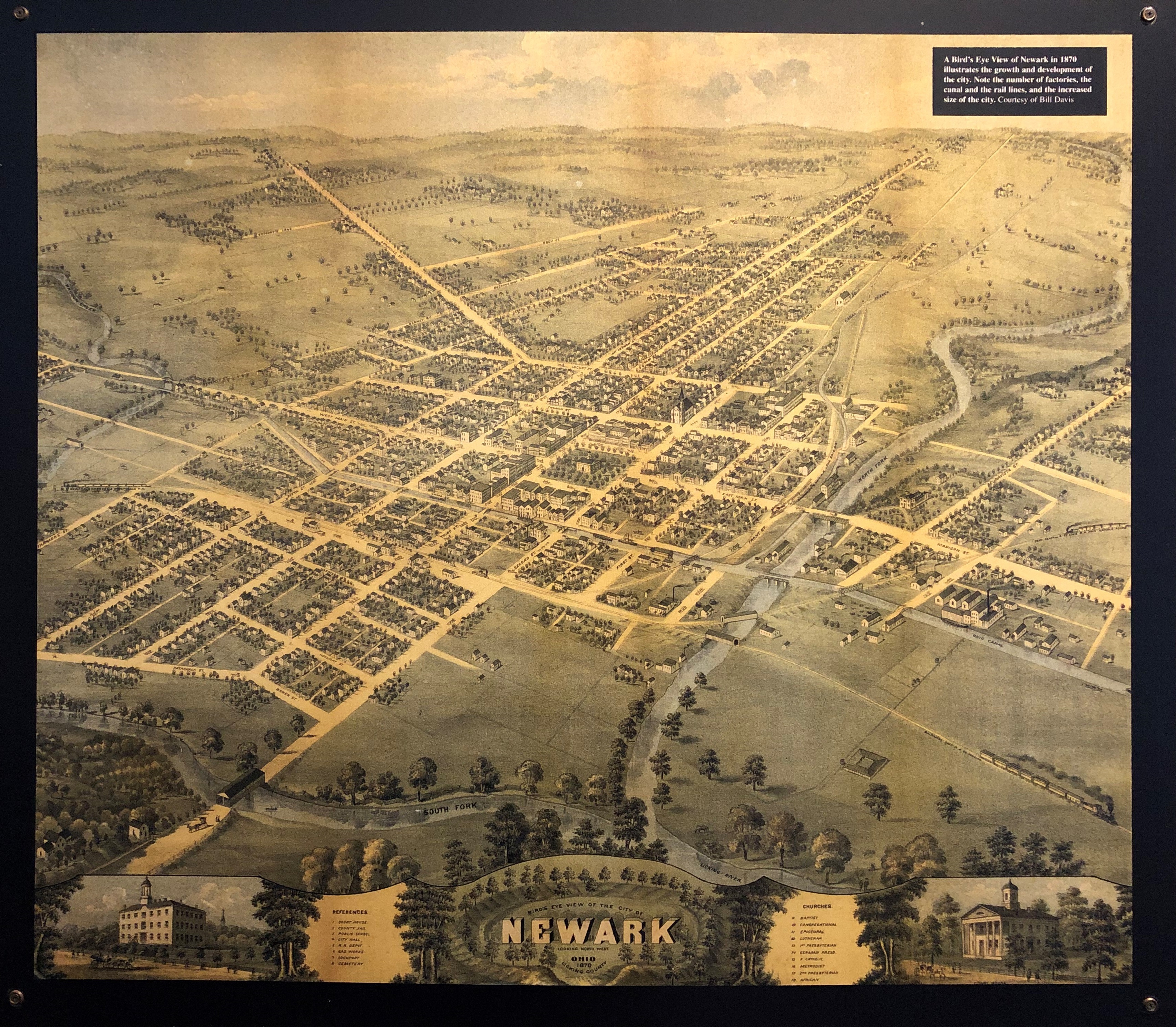 During the second half of the 1800's, Licking County was consistently among the top ten Ohio counties in agricultural production. As farmers sought profits, they benefited from increased market access via the railroad and also from local firms that provided tools and supplies to fulfill their needs. For example, in 1853, N.C. Pepper opened the Newark Agricultural Warehouse and Seed Store, which supplied plows, planters, cutters, various mills, and hand tools to local farmers.

On display in the museum are several tools from our agricultural past. Items like the Oliver plow, show the types of small tools used on a Licking County farm. The corn sheller was sold by McCune & Owens, a Newark merchandiser.

Not only were many families farming and growing food, but it was necessary to process many foods for home use. A few examples of tools to do this are also on display. The lard press and sausage stuffer are examples of these types of tools, both from Licking County farms. Interestingly, the lard press is attached to the seat of a chair, making it more secure and easier to use.