The Daily News Building (also known as The News Building) was the home of the New York Daily News and is best known as the model for the headquarters of the fictional newspaper Daily Planet, where Superman worked as journalist Clark Kent. The structure was the headquarters for The New York Daily News until the mid-1990s and was designated a National Historic Landmark in 1989. The News Building is the home for former News TV subsidiary WPIX and was also home to WQCD, the smooth jazz station The News had operated as WPIX-FM. After former News parent Tribune Company took over WQCD outright, the station was sold to Emmis Communications. 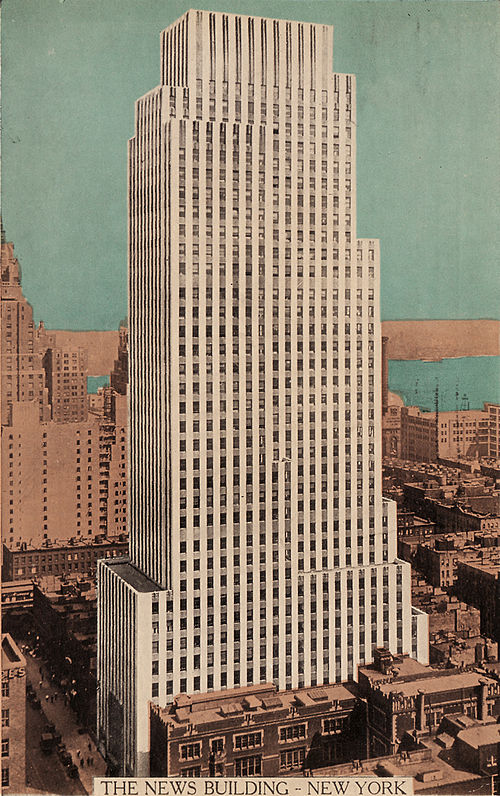 Built from 1929–1930, this Art Deco skyscraper was the headquarters for the NewYork Daily News newspaper until 1995. It was also the headquarters of United Press International until the news service moved to Washington, DC in 1982. Its design by architects Raymond Hood and John Mead Howells, among the first skyscrapers to be built without an ornamental crown, can be seen as a precursor to Hood's design of Rockefeller Center. A 1957–60 addition to the building which expanded the lobby on the southwest corner of Second Avenue was designed by Harrison & Abramovitz, echoing the vertical stripes of the original design, except with a wider stripe.

The building, including the newspaper's new printing presses, cost $10,700,000 – about $135 million in 2010 dollars. The lobby of the building includes a black glass domed ceiling, under which is the world's largest indoor globe (which was previously kept up to date; however, it has now not been updated for some time). This was conceived by the Daily News as a permanent educational science exhibit. The Daily News Building was designated a NewYork City Landmark in 1981 and its interior in 1998. It became a National Historic Landmark in 1989  and is now owned by SL Green Realty Corp.

The tops of the window stripes are decorated with ornamental spandrels extending all the way to the top of the building. At that point, they're sloped inward and split by a narrow pier. The top of the building is flat; unusual for buildings of its time. However, the level top served as an inspiration for many skyscrapers that followed. The main entrance is particularly indicative of the Art Deco style, with an ornate bas relief over that entrance featuring images of office workers underneath a sunburst. Visitors will notice that the ten-story base of the building is larger than what is above.

An addition to the Daily News Building was made in the late 1950s by architects Harrison and Abramowitz, including a five-story wing for the newspaper's enhanced printing plant and an 18-story wing to the east, which provided more office space. The newspaper moved out of the building in 1994 and the landmark skyscraper is now known as the News Building.Probably even more famous than the building's exterior is the giant globe that sits in its lobby. When the building first opened, it was one of the city's prime tourist attractions. The rotating globe sits in the middle of a domed room that's decorated with black glass. The map is updated as necessary. Clocks and thermometers line the walls near the globe, providing visitors with info about cities throughout the world.The building was designed that way in order to accommodate the newspaper's large presses on the lower floors.