Down a dirt path, along a spring fed stream, one can walk today along the oldest inhabited path in the area. The stream used to be much more forceful and it carved out small caves in the sandstone in what is now Monsey Glen County Park. In and near these caves, the first inhabitants of Monsey lived: Members of the Minsi (Wolf) tribe of the Lenappe (Delaware) Indians.

A Sandstone cave or rock shelter 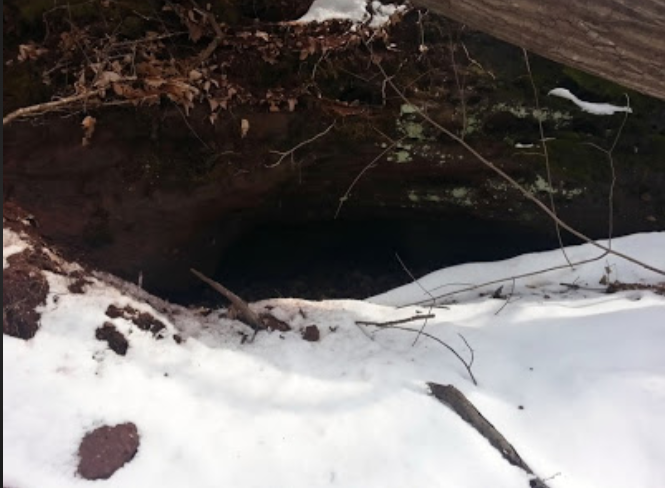 Some of the mystery steps 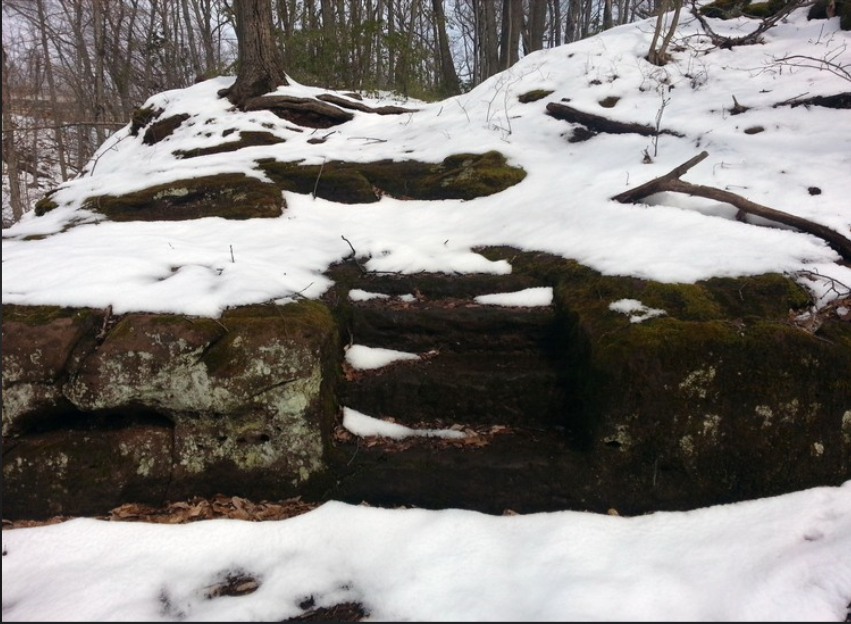 Path in the glen 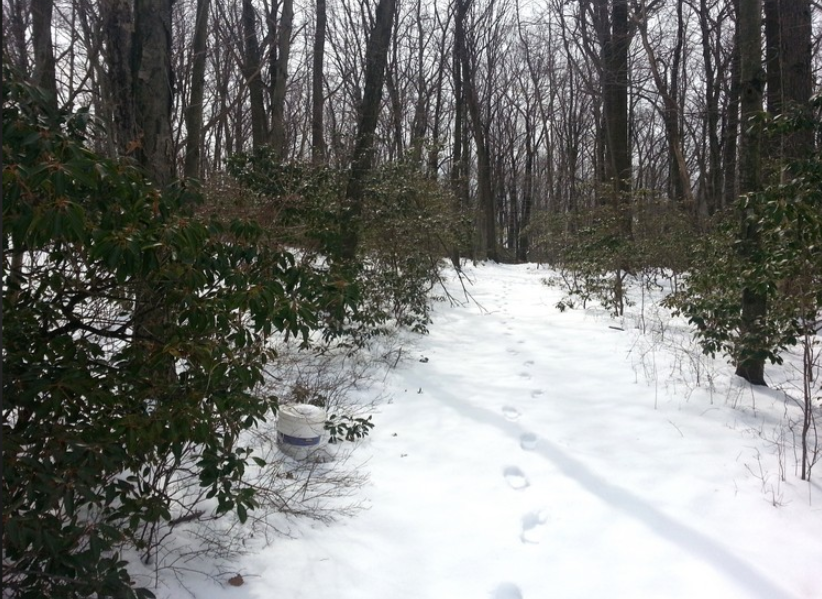 Rock Shelter in the glen 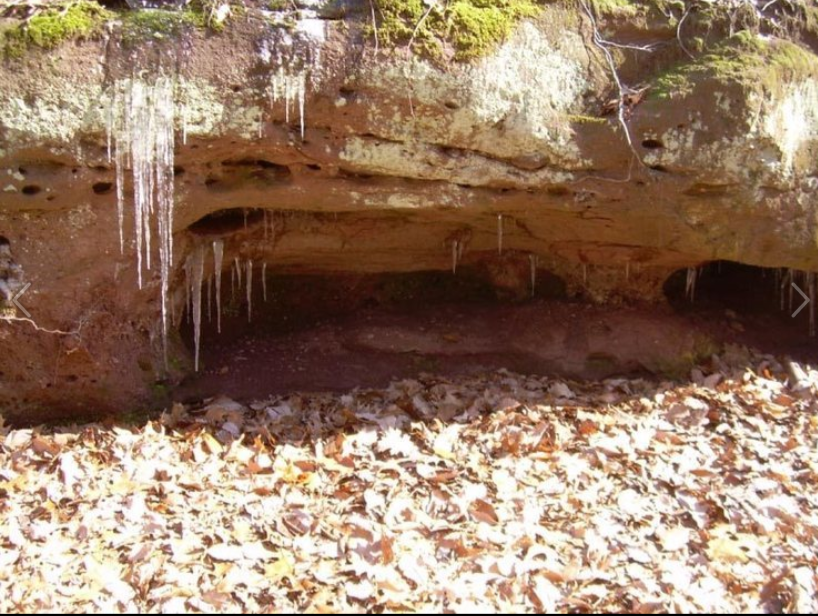 Newspaper clipping from 1936 about excavation. 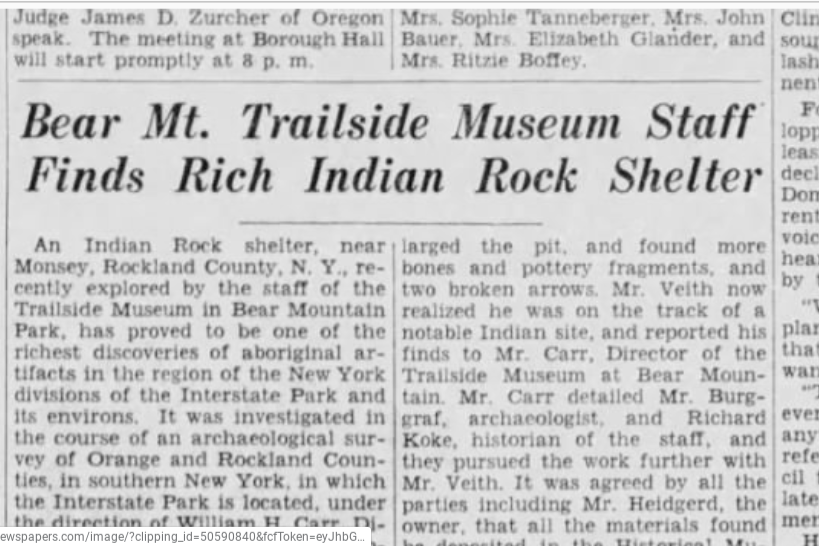 James Veith of Suffern, NY, a prospector of Native American sites, felt that the caves near the stream were so likely a former home of native people that he dug his own test holes. After finding more and more artifacts as he dug lower, he got in touch with William Carr, the director of the Bear Mountain Trailside Museum.

In 1936, James Burggraf, Richard Koke, and James Veith excavated a section of this park for the Bear Mountain Trailside Museum. The largest rock shelter they found was 49 feet long, 6 feet deep and 6 feet high. They found refuse bone, charcoal, and a number of other artifacts in the soil in front of the shelter. Underneath the soil that contained the artifacts, they found a large sandstone slab. It turned out to be the fallen remnant of an overhang that used to make the shelter even larger. Underneath the stone slab, a darker layer of soil held a cache of much older artifacts.

Mr Burggraf wrote that it is extremely rare to find a place where two communities lived in the same place but at different times marked so clearly. Two feet of stone separated the later Algonquin artifacts associated with the Woodland Indians, who lived from around 1000 B.C.E. until European takeover, from the earlier Algonquin artifacts. The layer of artifacts underneath included arrowheads and tools that were more than 3,000 years old. These included one Levanna Point, another side-notched point, a base drill, and a pitted hammer-stone, two pottery rim shards that were cord-malleated, knives and other points.

Some of the more than one hundred artifacts can be seen today at the Bear Mountain Trailside Museum.

The Sandstone near the creek had been quarried since the 18th Century. The Tenure House is built of Sandstone quarried from this same stone that the Minsi Indians chose for their homes. Other residents in the area used this stone for fireplace mantles and tombstones.

In the mid-19th Century, the Piermont Branch of the Erie Railroad was built along the Northwest border of the park. The track is still there though there have not been trains on it since the 1970's.

No one seems sure who carved the stairs into the sandstone in a natural amphitheater. Was it carved by Native Americans, quarry workers, or later to facilitate ladies in their long dresses exploring the area?

In the early 20th Century, the "clearing at the head of the glen" became an annual seasonal campsite for wandering Roma people. William Heidgerd, whose parents owned the surrounding land and who lived in the "glen house" (burned down in 1988), remembers how colorful the Roma people's clothing and wagons were. It was an irresistible temptation for the children to visit the wanderers, though the farmers kept an extra watch during the season the wanderers visited.

I spent countless hours in this park as a child and adolescent. The wonder of the "Indian Steps" and the "caves" fired my imagination and the quiet calm of nature restored me.

The first three sites contain early Monsey history. The next four sites depict early Jewish Monsey history. (You may need to turn around the Google Map square to see the correct site, sorry.)