Fred T. Evans founded towns, created banks, developed streetcar companies, shipped goods to gold miners, and otherwise exhibited many traits of Gilded-Age entrepreneurs. He built the Evans Block building for his bank, one of the many signs of the Sioux City boom of the 1880s and early 1890s. The population grew from less than 10,000 to more than 30,000 from 1880 to the Evans Block opening in 1891, and there was much investment in the city and construction occurring during the decade as belief was strong that the growth would continue.

2012 Photo of The Evans Block building in Sioux City, Iowa. 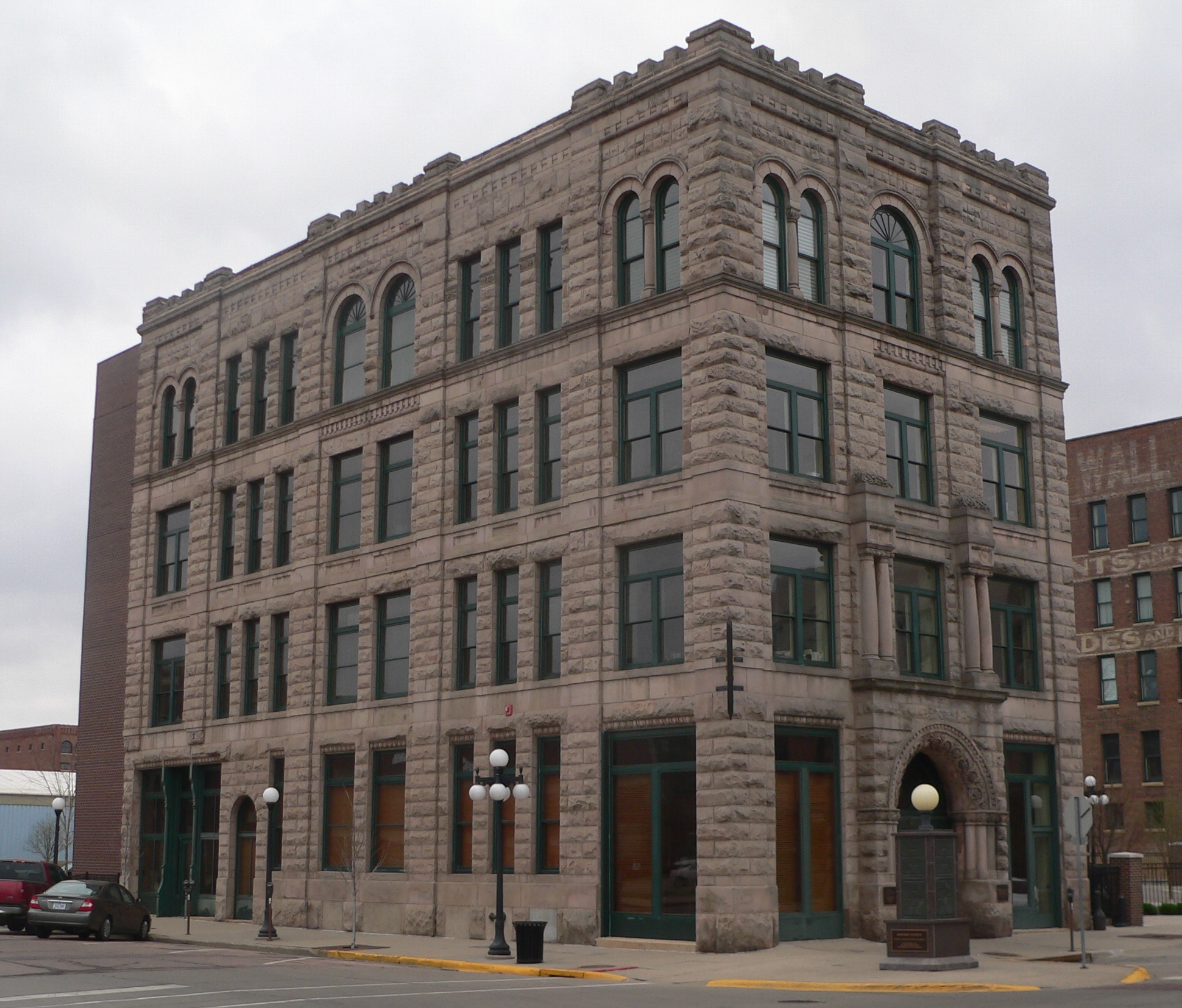 The Evans Block (1890-91) is a surviving example of the Sioux City building boom during the late l880s and early 1890s. The neo-Romanesque style, with its impressive sandstone exterior, speaks volumes about the growth of Sioux City during the late nineteenth-century and the confidence felt by speculators and investors that the trend would continue. One such speculator was the wealthy entrepreneur, Fred Evans, who spearheaded the building project.

The arrival of the railroad in 1868 led to factory development and the first large-scale meatpacking plant in 1873, followed by stockyards in 1884. By 1880, Sioux City population stood at 7,500 people, which soared to 38,700 by the time the Evans Block construction started in 1890.

Fred T. Evans (1835-1902) moved from Ohio to the Council Bluffs area in 1856 and exhibited many of the traits shared by midwest entrepreneurs during the Gilded Age. He obtained sizable wealth through a multitude of business ventures. He first ranched west of Sioux City in Nebraska and founded the town of Sloan, Iowa moving to the city in 1875. He started his journey as a successful businessperson by first opening (with a partner) a hardware store and agricultural implement business. He then started the "Black Hills Transportation Company," which freighted goods to the Dakota Indian territory, mostly to gold miners. (The U.S. Cavalry once arrested him for trespassing.) Once the U.S. government took control of the Dakotas, Evans added steamboat and train shipping to his Black Hills company.

By the 1880s, Evans had grown wealthy and his investments grew vastly larger as a result; the Evans block arrived at the end of the decade. In 1881, Evans developed the resort town of Hot Springs, South Dakota, where he built his own bathhouse and hotel, and served as city mayor and urban planner. Taking advantage of the area's hot springs, he constructed several bathhouses, including Evans Plunge, which existed as the world's largest enclosed natural warm-water swimming pool when it opened. Additionally, Evans started a stone quarry operation near the resort town.

Meanwhile, in Sioux City, he started the city's first street railway company called The Sioux City Street Railway Company. He quickly sold the streetcar company and followed the strategy of many Gilded Age tycoons by forming a bank; he created an allied bank of the Union Trust Company. And then, when The Northwestern National Bank opened in 1890, the company named Evans its president. By early 1890, Evans began building a commercial structure that would house his banking operation, as well as two stores and several offices. The face of the Evans Block is made with Black Hills sandstone from his quarry; the bank moved into its new offices in the "Evans Block" mid-January, 1891.

The increased presence of banks and the building boom during the 1880s and 1890s speaks to the city's growth. Evans, like many investors, speculated that Sioux City would continue to grow and possibly rival the likes of Chicago. But, the Panic of 1893 ended the boom and dimmed hopes in Sioux City's growth for a time. Indeed, Evans sold The Evans Block in 1895. He spent his remaining years in the Hot Springs town he created; he died there in 1902.

The building stands as a monument to a town oozing with potential in the 1880s and 1890s. Investors arrived to help finance construction, leading to a building boom. Evans was one of those investors, although his building proved to be only one of a multitude of entrepreneurial projects for which he engaged; he left his mark throughout the Dakotas, Nebraska, and Sioux City.