It was here in Chickasawachee Swamp that a battle that was part of the Southern Indian Wars was fought on July 3rd, 1836. Thomas Beall commanded a militia that followed him onto an island in the swamp where the battle was fought. Preventing the Indians' from marching into Florida and scattering them into smaller parties was the end result of the battle. 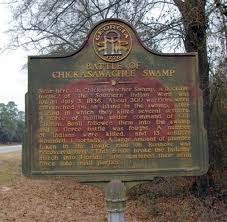 Looking East on Clear Lake Road Toward the Swamp 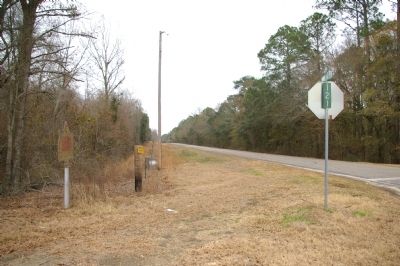 On July 3rd, 1836, a battle that was part of the Southern Indian Wars was fought on an island in the Chickasawachee Swamp.  About 300 Indian warriors were on the island planning on defending themselves, as they had just come from burning Roanoke in Stewart County and were now on their way to join the Seminoles in Florida.  The Georgia militia, led by Colonel Thomas Beall, consisted of about 500 men.  The men surrounded the island in the swap and fought the Indians. (2)  “A number of Indians were killed, and 13 soldiers wounded, one mortally”. (1)

The battle prevented the Creek Indians from marching into Florida.  Instead, they fled to Florida in an attempt to escape the Georgia militia.  By this time, they were broken up and scattered into smaller parties.  Many of the Indians’ supplies were left behind when they fled including “36 tents, and an incredible quantity of beef, bacon, horses, saddles, bridles and many cooking utensils”.  (2)

The historical marker is located near Newton, Georgia in Baker County.  It is at “the intersection of Georgia Route 37 and Clear Lake Road, on the right when traveling north on State Route 37.” (1)  However, the exact location of the battle site is controversial.  The only island that is located within the Chickasawachee Swamp is shown in some maps to be “immediately west of Elmodel, along George Highway 37”.  Another possible location of the battle site is where the Chickasawachee Wildlife Management Area resides today.  The swamp is much larger in this area.  It is “just east of Georgia Highway 37 and north of Clear Lake Road, some three miles north of Elmodel”. (2)