The U.S. Navy began a program in the mid-1970s to develop a multirole aircraft to replace aging A-4 Skyhawks, the A-7 Corsairs, and F-4 Phantoms. General Dynamics proposed the YF-16 and Northrop the YF-17. The Navy didn’t care for the F-16 and asked McDonnell Douglas and Northrop to develop a new aircraft from the YF-17. In 1977 the Secretary of the Navy announced that the F-18 would be named “Hornet”. Northrop partnered with McDonnell Douglas and agreed to split component manufacturing with McDonnell Douglas conducting final assembly. In 1980, the aircraft began to be referred to as the F/A-18A combining the attack and fighter missions. The F/A-18 is a twin engine, mid-wing, multi-mission tactical aircraft. It is highly maneuverable, owing to its good thrust to weight ratio, digital fly-by-wire control system, and leading edge extensions (LEX). The LEX allow the Hornet to remain controllable at high angles of attack. Canted vertical stabilizers are another distinguishing design element. Following successful flight tests, the aircraft joined fleet units in the early 1980s. 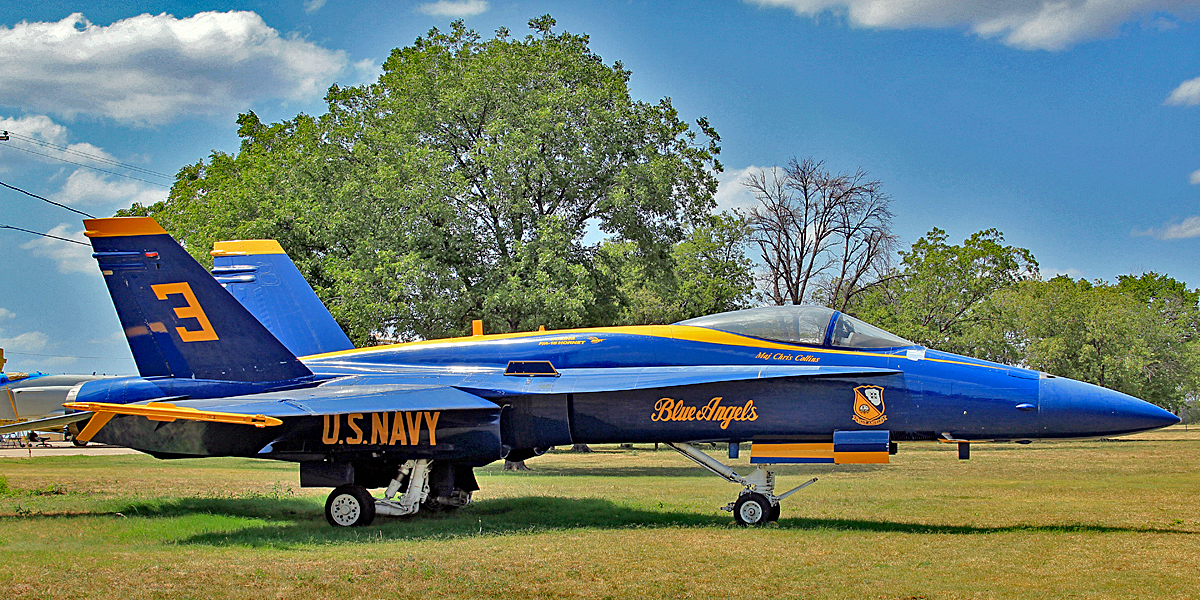 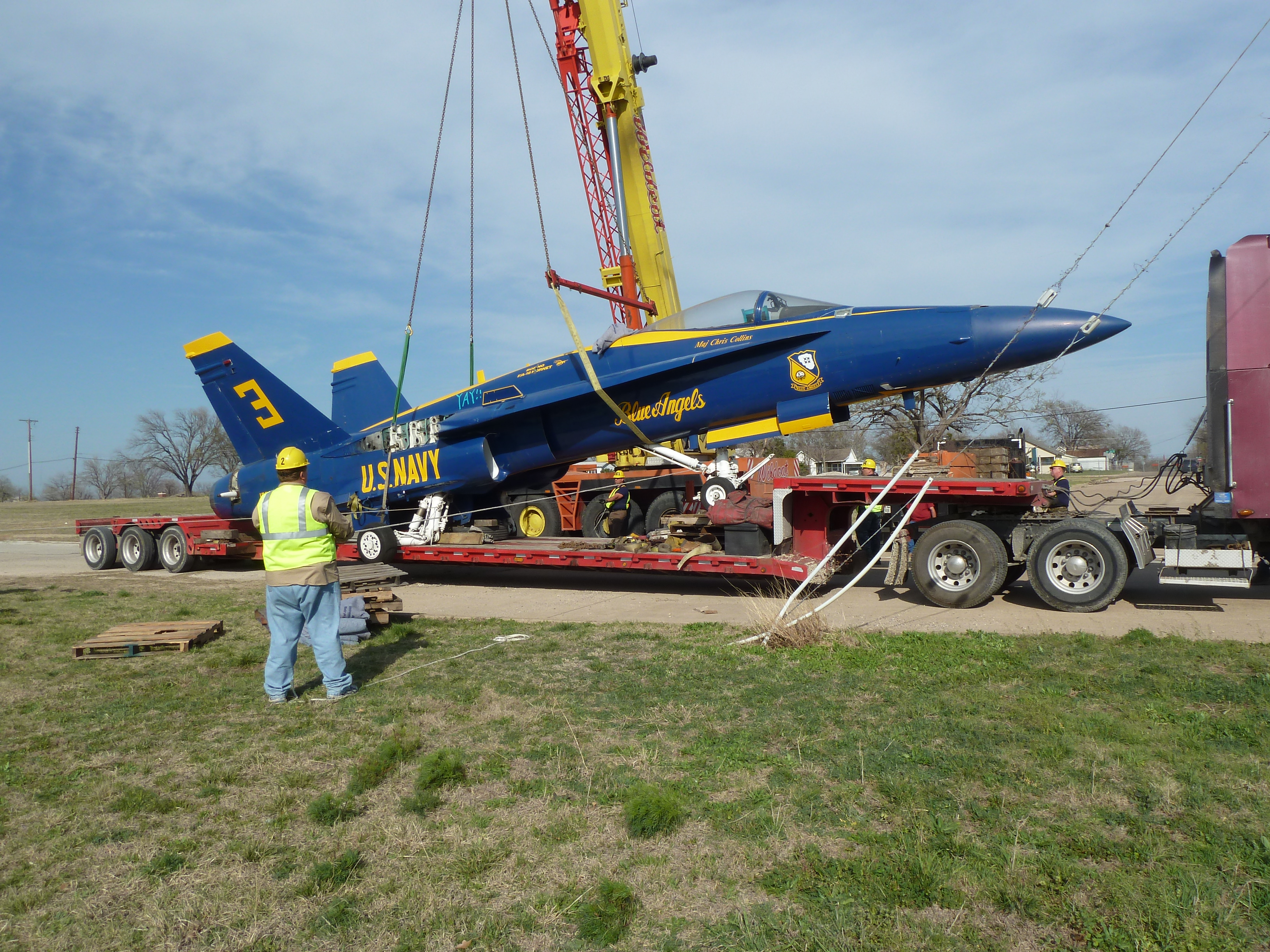 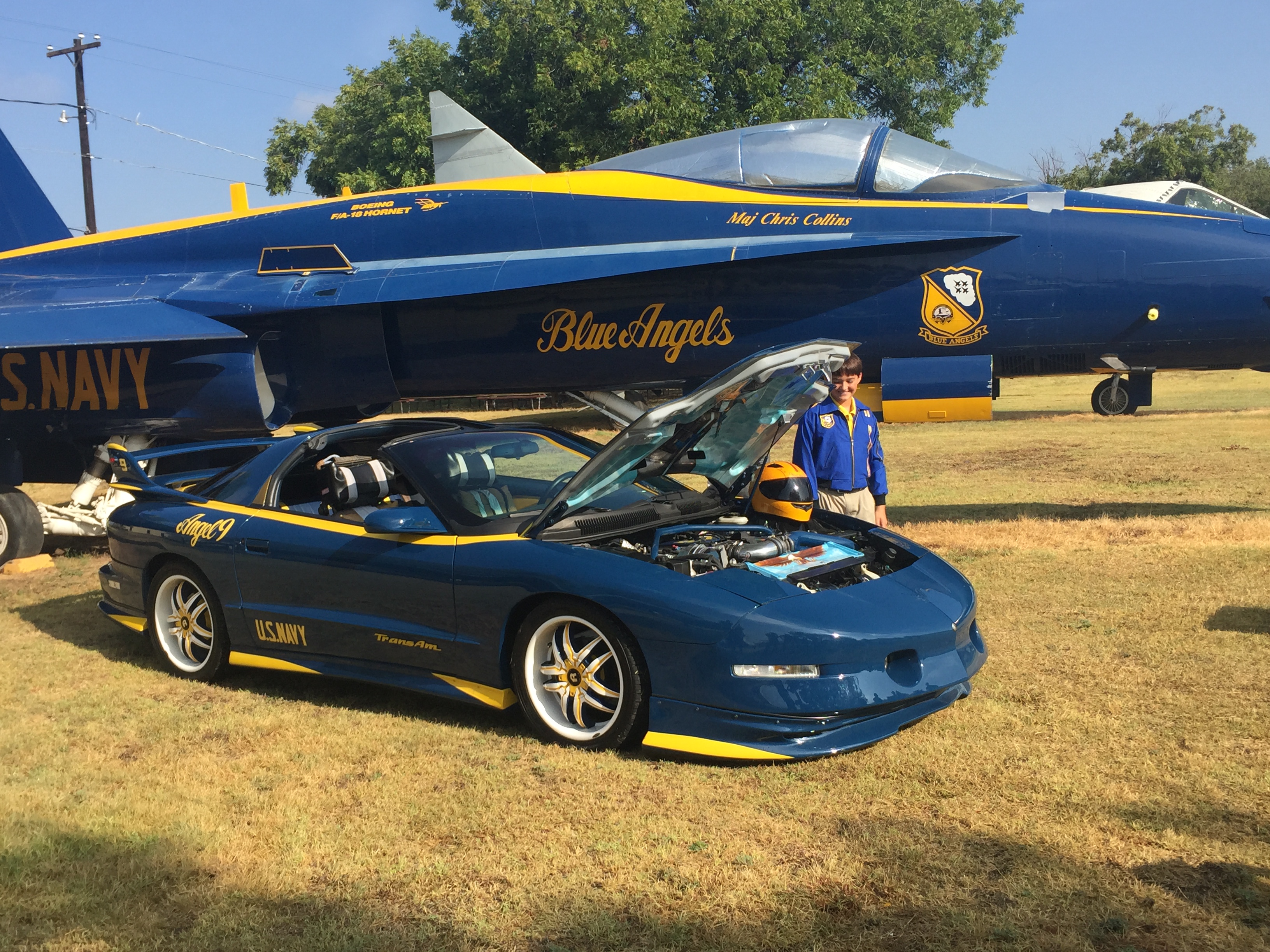 The Fort Worth Aviation Museum’s McDonnell Douglas F/A-18A-17-MC Hornet (Lot 8), Bureau of Aeronautics No. 162826, c/n 342/A285, was built in St. Louis, Missouri. This aircraft has had an impressive Navy career and is painted in its final service colors — that of a Blue Angel.

It was first assigned to Strike Fighter Squadron One Nine Five (VFA-195) Dambusters on the USS Midway in 1986. At the time, VFA-195 was assigned to the newly established CVW-10. The wing was to deploy on the USS Independence and was given the old CVW-19 tail code “NM”. However, CVW-10 was never deployed. VFA-195 was the only squadron of this wing that was not disestablished in 1987. Instead, the Dambusters were reassigned to CVW-5 aboard the USS Midway, when CVW-5’s fighter squadrons transitioned from the McDonnell Douglas F-4S Phantom II and the A-7E Corsair to the F/A-18 Hornet.

VFA-195 joined the Forward Deployed Naval Forces in U.S. Fleet Activities Yokosuka, Japan on 1 July 1987. While ashore, the Dambusters operated out of NAF Atsugi, Japan. From November 1987 to February 1988, the squadron participated in Operation Earnest Will, the escorting of reflagged Kuwaiti tankers through the Persian Gulf. In the fall of 1988 and again in 1989, the squadron embarked aboard Midway and made deployments to the Indian Ocean, along with several shorter deployments in the Western Pacific.

VFA-195 was deployed aboard the USS Midway when Iraq invaded Kuwait in August 1990. During Operations Desert Shield and Desert Storm the Dambusters flew 564 combat missions, delivering 356 tons of ordnance, and became the first Hornet squadron to deliver a Walleye II glide bomb in combat.

In August 1991 CVW-5 switched from the Midway (which was being retired) to the new forward deployed carrier, the USS Independence, near Hawaii. In March 1996, CVW-5 and the Dambusters deployed to calm tensions in the Taiwan Strait over Taiwan’s first direct presidential elections. Between 1991 and 1998 VA-195 made ten deployments aboard the Independence to the Western Pacific and the Indian Ocean.

During 1993, this aircraft was assigned to Air Development Squadron Five or VX-5 Vampires (Aircraft number XE-05) at NAF China Lake, California. During June 1993, VX-5 and VX-4 were combined to create VX-9 located at Pt. Mugu, California. In November 1986, the Navy’s Flight Demonstration Squadron, better known as the Blue Angels, re-equipped with F/A-18 Hornets. This aircraft was assigned to that squadron during the 1990s and flew with them until it was retired in 2009. It flew with tail numbers 1, 3, 4, and 5. Its last number was 3 and that is how it remains today — just as it was flown by then Marine Corps Maj. Chris Collins.

The aircraft was scrapped or struck off charge (SOC) on December 4, 2009. It remained at the National Naval Aviation Museum, Pensacola, Florida, from 2010 to 2013 until it was loaned to the museum. This aircraft arrived at FWAM by truck on March 13, 2013.