Completed in 1955, the Jackson Lake Lodge is located within Grand Teton National Park. It was the precursor to the National Park Service’s Mission 66 project, a decade long endeavor to construct additional park amenities in time for the park service’s 50th anniversary in 1966. Designed by Gilbert Underwood at the behest of John D. Rockefeller Jr., the lodge broke from the park service’s traditional rustic architectural design for its buildings. In what has come to be called the International style, Underwood combined modern materials and design with rustic accents that blend with the surrounding landscape. The lodge still welcomes guests to the park and was designated a National Historic Landmark in 2003.

Intentionally designed with a low profile, Jackson Lake Lodge does not detract from the surrounding beauty. 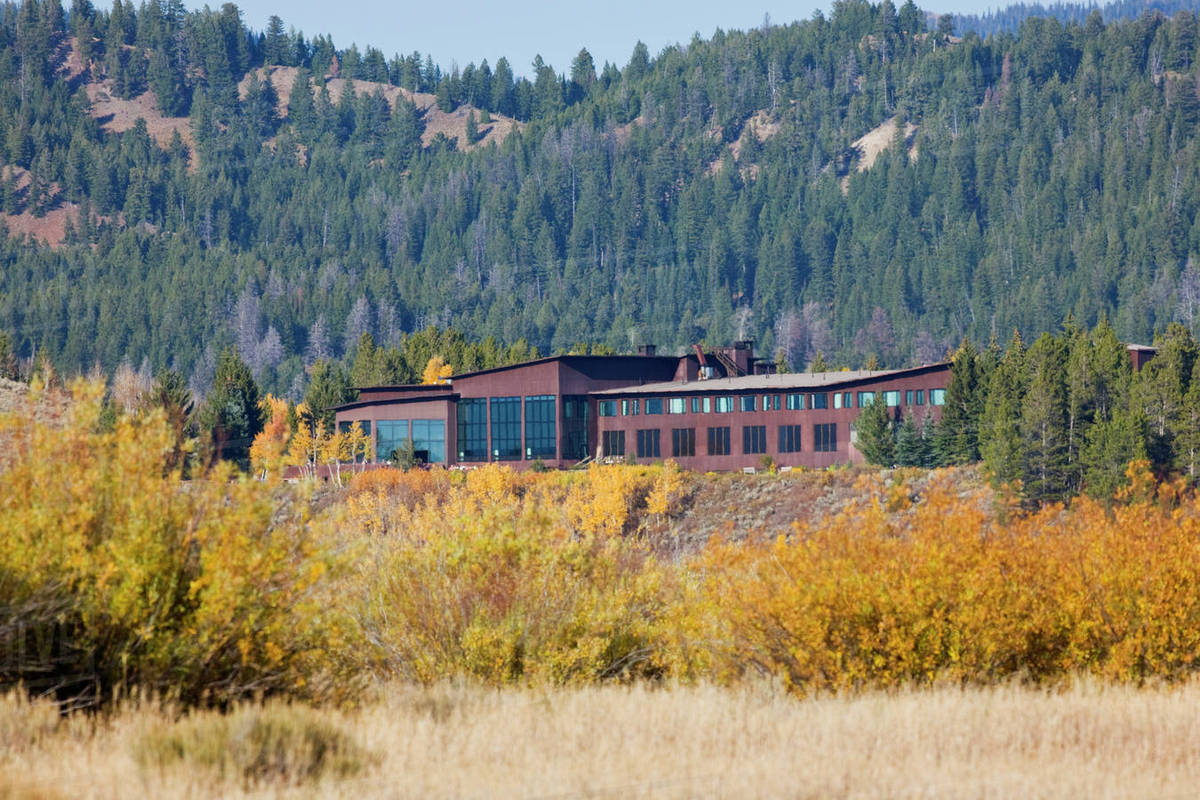 Patrons enjoy the stunning vista from the lodge's rear patio. 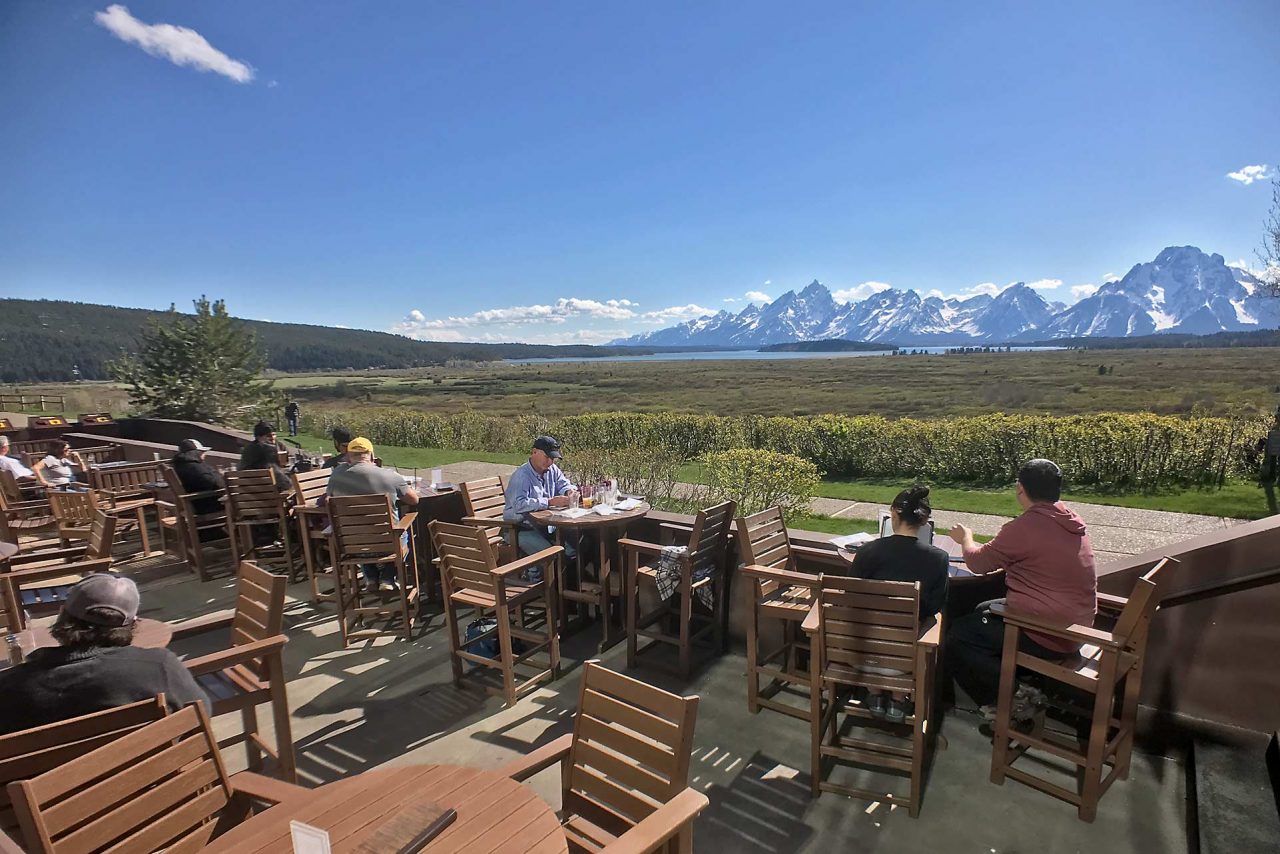 The interior has been described by one New York Times columnist as "...an artful blend of comfortable modern with western." 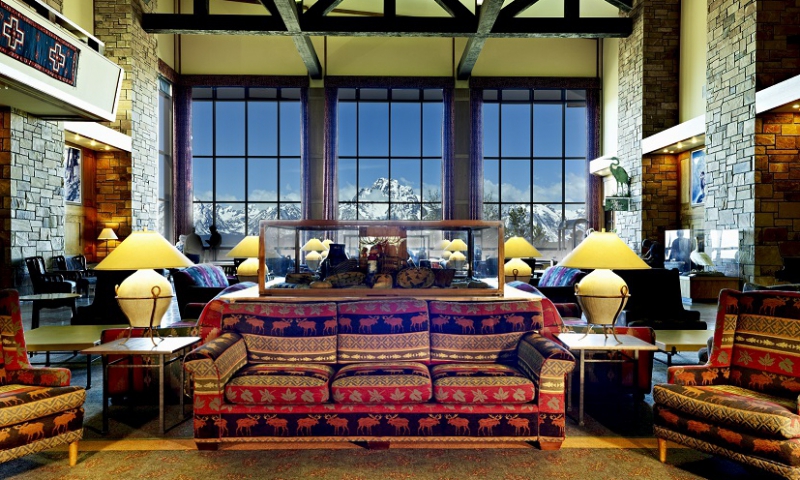 Some of the lodge's nearby cottages. 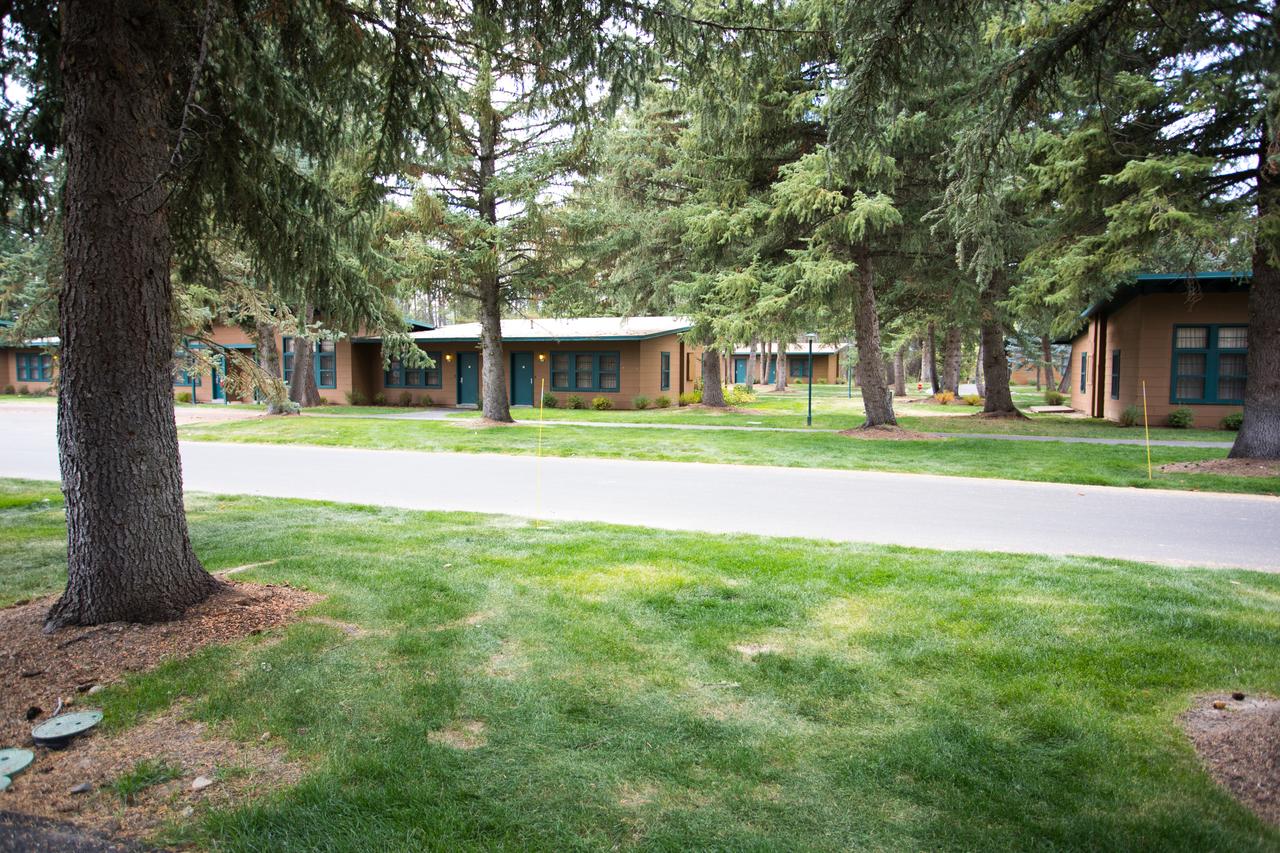 The lodge during construction. 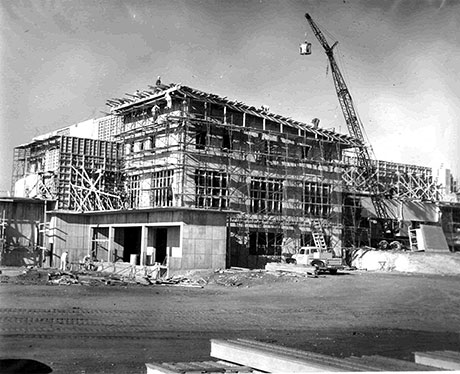 A map of the lodge complex. 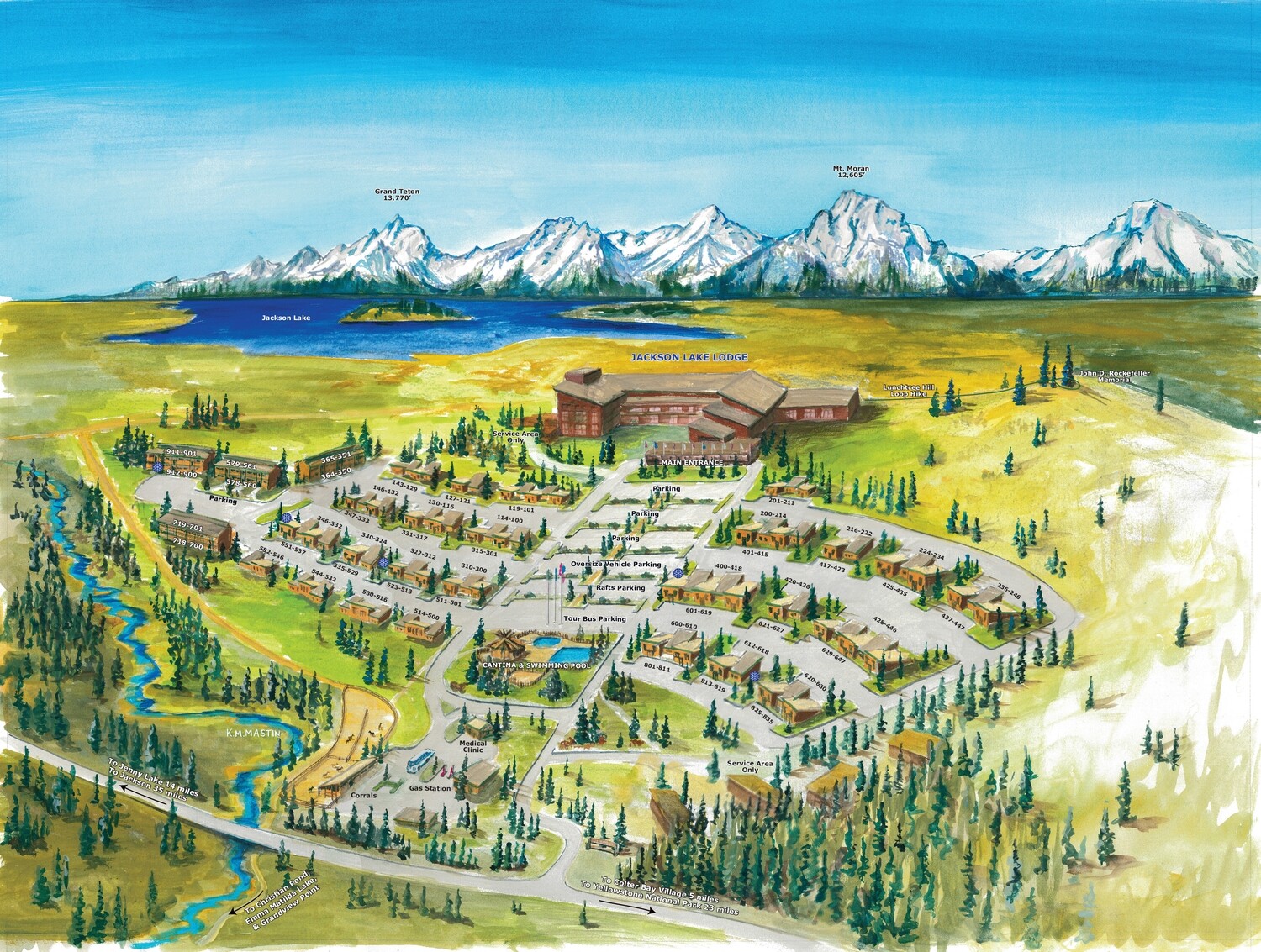 A few of Roters murals within the lodge's Mural Room. 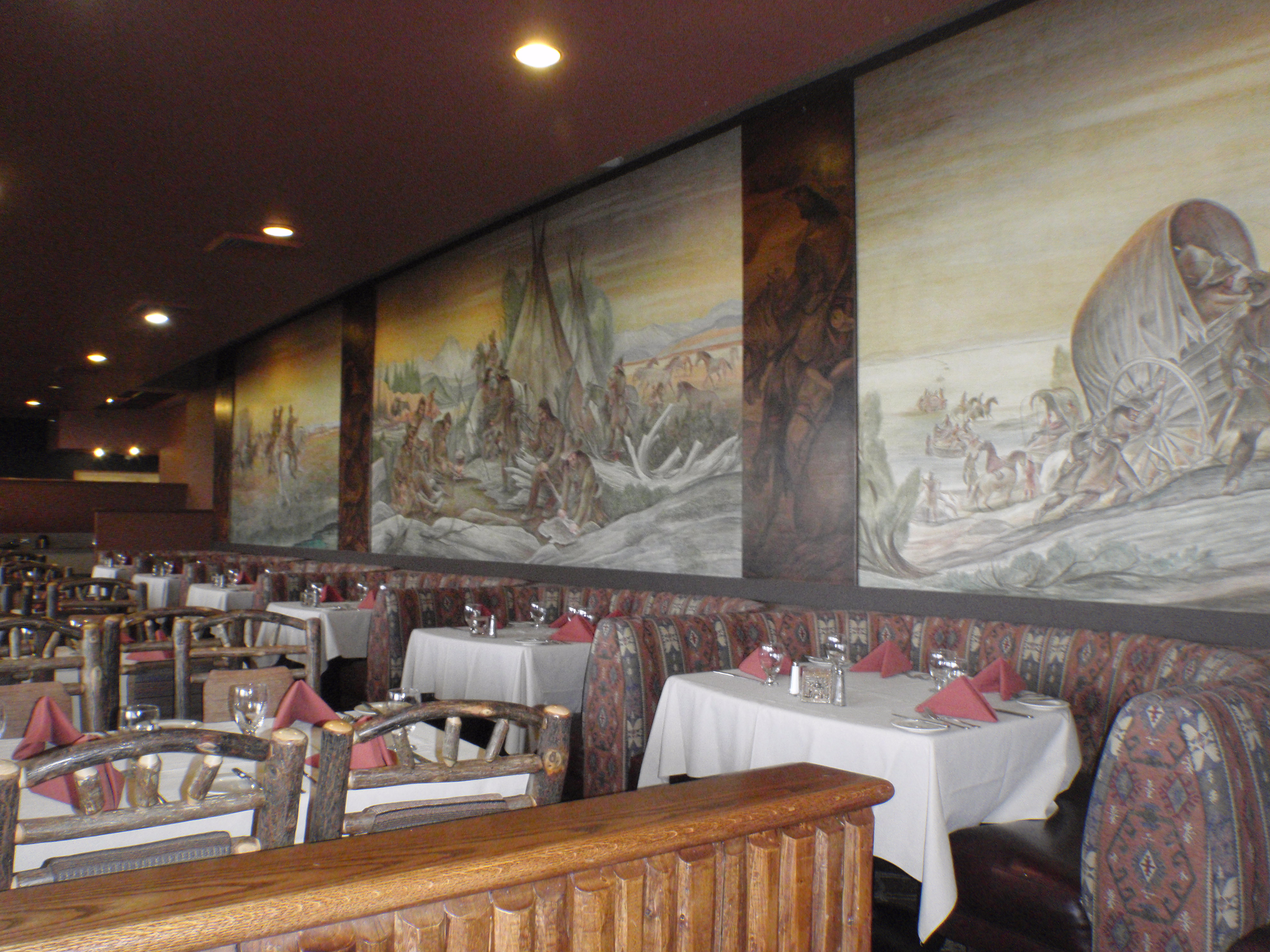 Rather than expand the nearby existing Yellowstone National Park, which was established in 1872, to include part of the Teton Mountain Range, the residents of Jackson Hole and the federal government decided to create a separate park in 1929. President Calvin Coolidge signed the executive order, creating the 96,000-acre Grand Teton National Park, a few weeks prior to leaving office. In the late 1920s, John D. Rockefeller Jr. visited the park site and Jackson Hole Valley and was dismayed to learn that most of the land around the park site was in private hands. In order to conserve the land and prevent commercial exploitation, Rockefeller began to buy up land around the park under the guise of the Snake River Land Company with plans to eventually donate the land for the park’s expansion. Local and federal opposition to Rockefeller’s plan emerged upon discovery and President Roosevelt used the Antiquities Act to create the 221,000-acre Jackson Hole National Monument in 1943. The monument and park were then combined in 1950, enlarging Grand Teton National Park to 310,000 acres. However, Rockefeller’s role in this tale is not yet complete.

The same year the park expanded, Rockefeller contacted architect Gilbert Underwood and discussed plans for building better accommodations within its confines. Rockefeller and the National Park Service realized that the country’s new highway system and post-World War II prosperity would bring more people to the country’s national parks. Over 500,000 people visited Grand Teton in 1951 alone. Its facilities were inadequate to meet that type of demand. Thus, Park Service Director, Conrad Wirth, developed Mission 66 in order to improve and expand roads, utilities, interpretive facilities, visitor centers and lodgings at all the country’s national parks by 1966 and Jackson Lake Lodge initiated that project.

The site Rockefeller and Underwood chose, with sweeping views of Jackson Lake and the Tetons beyond was already occupied by the Amoretti Hotel and Camp which happened to be owned by Rockefeller’s land company which purchased it in 1930. 1953 was the camp’s last season as it was razed to make room for the new Jackson Lake Lodge. Underwood, who by this time had also designed the Ahwahnee Bryce Canyon and North Rim Grand Canyon Lodges, incorporated some of their concepts into his new lodge. He gave it a low profile to make it less obtrusive and used modern materials, such as concrete and glass, to bring the outside in and to give it a modern look with rustic elements.

Inside, the lodge combined modern and western elements that featured Native American designs. Jackson Hole Preserve, Incorporated purchased Native American artifacts from David Vernon which included katsina dolls, jar and bowl pottery and woven textile rugs and donated them to the lodge. They still adorn the interior today. Rockefeller also sponsored a mural competition for the lodge with “Fur Traders and Trappers of the Early West” as its theme. It was won by an art professor from Syracuse named Carl Roters. Roters based his murals on the works of trapper and artist Jacob Miller who traveled the area documenting what he saw through his art in the 1830s. Located in the Mural Room, Roters ten Rendezvous Murals each cover up to 28 feet of wall space. Another mural, “Trapper’s Bride” by Charles Banks Wilson, graces a wall of the lodge’s Blue Heron Lounge.