These are the Devenish Apartments. Built in 1911, they are a beautiful example of Calgary architecture prior to World War One. Optimism was at an all-time high and builders could hardly keep up with the demand for housing. Designed by renowned Calgary architect Alexander Pirie, the Devenish is unique in many ways. For one, it was one of the first apartment blocks in Calgary built with a reinforced concrete frame, as were the Anderson apartments nearby on 18th Avenue. That allowed more light to come in which you can still notice inside the building. For another its original facade was shaped like a castle complete with crenelated turrets at the corners. As well, the wooden balconies were supported by huge handcrafted brackets instead of columns. The apartments were built by Oscar Grant Devenish, a real-estate agent and oilman from Spokane, Washington. The buildings architect, Pirie, probably drew on his Scottish roots when making the plan. The Devenish was a luxury apartment complex and boasted of being the largest and most modern apartment block in the West. The building was steam heated and had its own steam laundry. As well, garbage was incinerated odourlessly in the basement. The Devenish certainly attracted the right people, a rapidly growing group of entrepreneurs and managers. The building retains its thick sandstone window-sills and lintels by the original turrets, seen here, have long since been lobbed off. Still it is a vibrant part of the neighbourhood and exists today as retail and office space. The Devenish was designated a Provincial Historic Resource in 1981.

“Black and white photograph of the view of the Devenish apartments from the intersection of 17th ave. and 8th street SW in Calgary, AB.” PC_1271 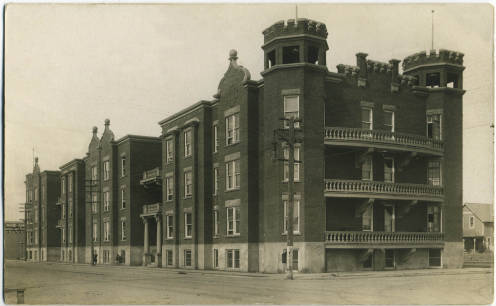 Post Cards from the Past Collection, Calgary Public Library

Welcome to the Beltline District! Comprised of the historic communities of Connaught and Victoria Park, this area contains some of the earliest communities in the rapidly growing city and became a place associated with wealth and prestige. Mansions dotted what is today 13th Ave., so many that a writer later called it millionaires row. Connaught is home to Calgary's first library, several historic churches, and schools and the residence of Nellie McClung one of the Famous Five, who won the right for women to be called "persons" in Canada. The name Connaught comes from the Duke and Duchess of Connaught, who made a vice regal visit to Calgary in 1912 with their daughter Princess Patricia. In the decade before World War One, Calgary grew tenfold from 4,000 to 40,000 and much of that growth took place here. Eventually though, most of the great estates and large houses in Connaught were either torn down for redevelopment or split into smaller apartments. Today, the wide mix of remaining architecture in the neighborhood represents every decade in Calgary's rich history.