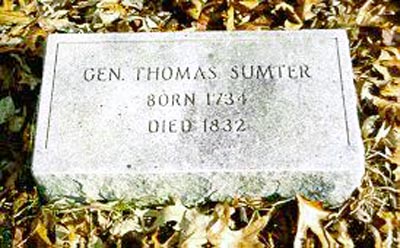 Thomas Sumter Memorial Park is the final resting place for General Thomas Sumter and members of his family. Sumter was an American Revolutionary War general and statesman who is widely known as the "Fighting Gamecock."

Born at the Preddy's Creek settlement of Louisa County, near Charlottesville, Virginia, on July 14, 1734, General Sumter was the longest surviving general of the Revolution. He was a planter and a surveyor who served as a member of the militia of the Colony of Virginia, where he gained combat experience in a number of skirmishes with Cherokee Indians during the French and Indian Wars.  Sumter moved to South Carolina in 1760 and opened a small store at Nelson's Ferry.

Just prior to the Revolution, Sumter was elected a lieutenant colonel in the Second South Carolina Rifle Regiment. During the war, he led soldiers in many guerilla-style attacks against British and loyalist forces throughout South Carolina. It was during these battles when a British general is said to have commented on Sumter's skills by saying that he, "fought like a gamecock." Lord Conwallis is said to have called Sumter his, "greatest plague."

After the Revolution, Sumter was elected to the U.S. House of Representatives, serving from 1789 to 1793 and from 1797-1801. In 1801 he was elected by the South Carolina Legistlature to replace Charles Pinckney in the U.S. Senate. In 1810 Sumter retired from the Senate to his 150,000 acre plantation near Stateburg, SC, a city Sumter founded.

Sumter died at the age of 97 on June 1, 1832, making him the last general of the American Revolution to die.