You are vieweing item 1 of 5 in this tour.

This is a contributing entry for The Milan Museum and only appears as part of that tour.Learn More.

Experience the atmosphere of a real blacksmith shop, where a horse awaits his shoes and the smithy tools of the trade are on view. Discover the machines used to make tools for farming, fire and other industries in the area. 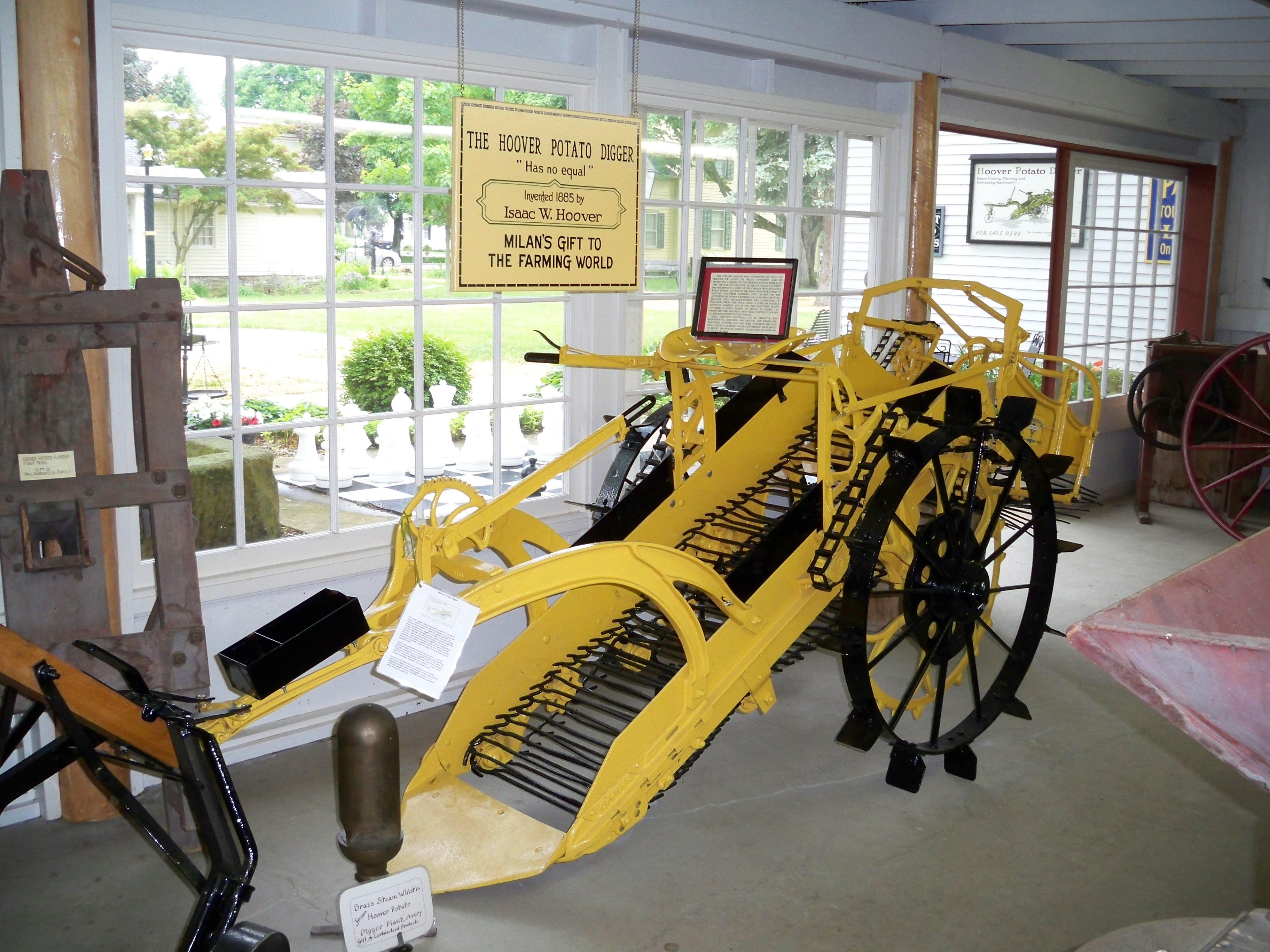 A blacksmith forge and bellows are in the background of a paper-mâché horse that would have sat in front of the shop to symbolize the blacksmith shop for any illiterate patrons. 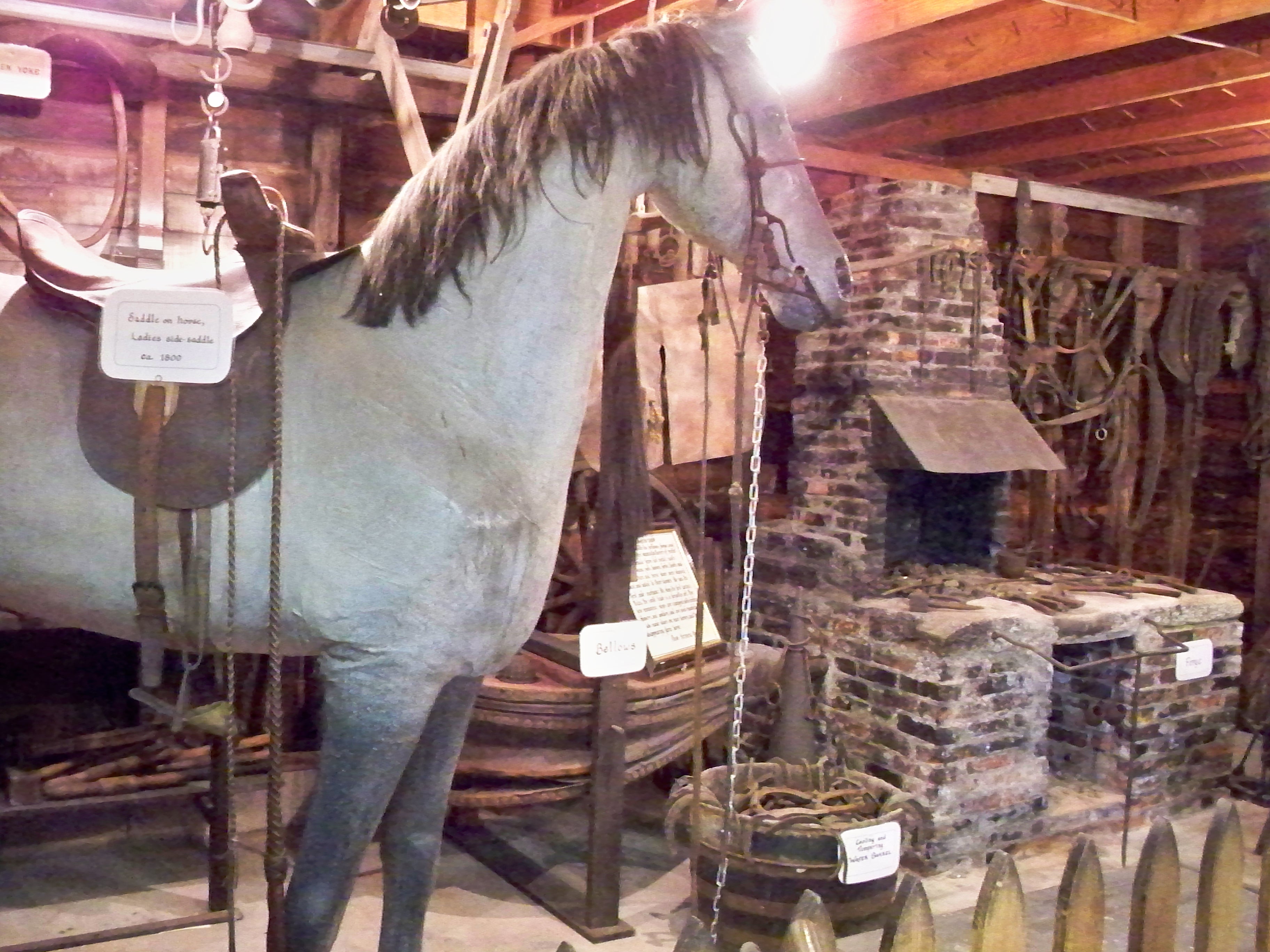 Fire equipment once used by the Milan Fire Department 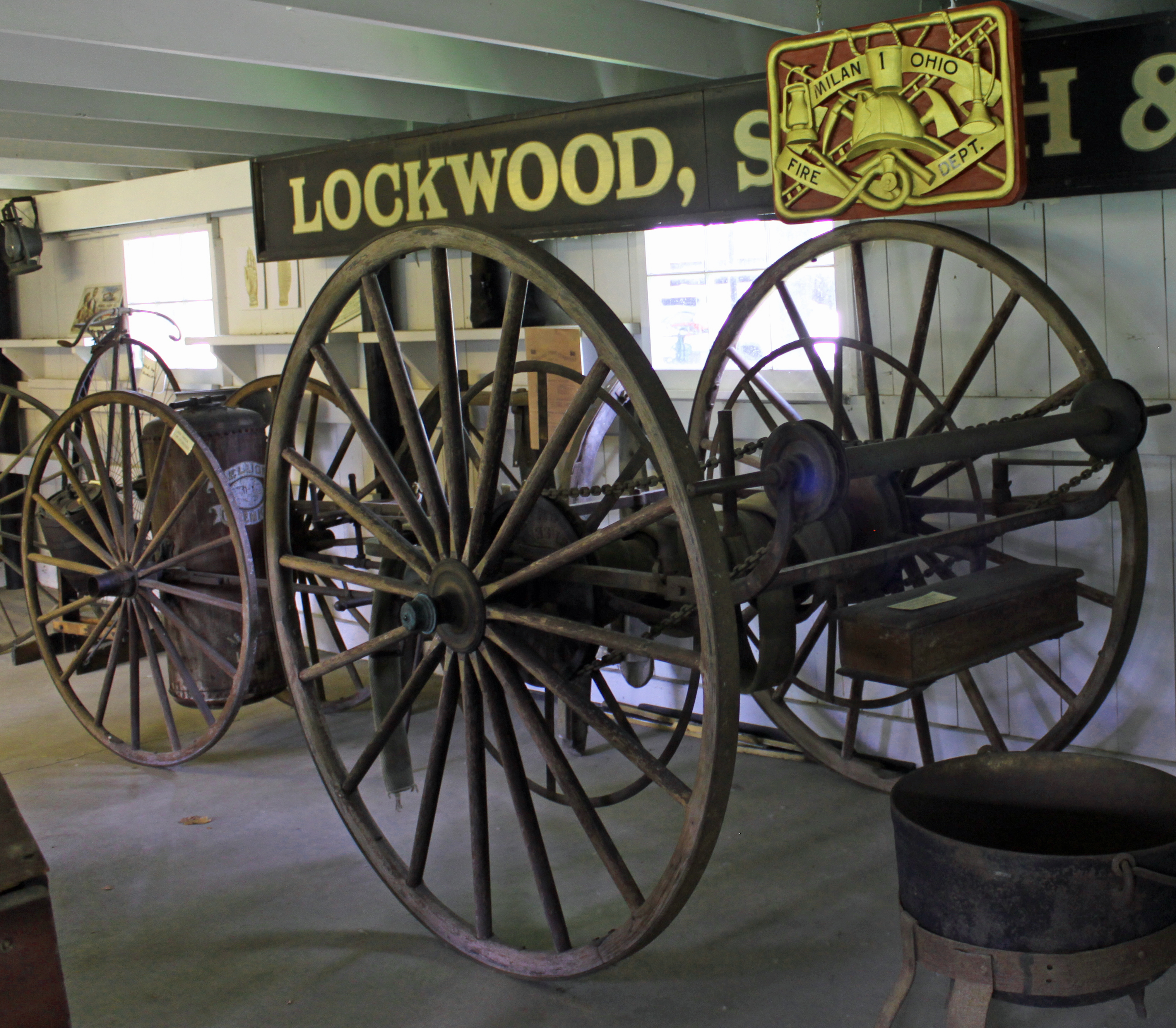 Necessity is the mother of invention. Never was that more true than with the invention of the potato digger. Before the advent of mechanized diggers, a farmer could only harvest as many potatoes as he could dig by hand. With a mechanized digger – like the one invented by Isaac Hoover – he could harvest hundreds of bushels a day. Hoover’s wasn’t the first mechanized potato harvester (that invention dates to the late 1860s) but it was one of the most popular early units.

Isaac Woolverton Hoover was born in 1845 in Groton Township, Erie County, Ohio, the eldest son of John and Elizabeth Hoover. In 1851, following John Hoover’s return from the California gold rush, the Hoover family settled on a 115-acre farm in Oxford Township, Erie County, Ohio. There, Isaac gained valuable skills from his father, a stone mason and farmer. In 1866, Isaac married Hannah Jane Beare and together they had three children. After moving several times, Isaac and his family established their permanent home on a large farm in Avery (just south of Sandusky), Ohio, in 1875.

Hoover, a farmer, initially focused his energies on the potato crop. For a number of years, his farm produced the largest potato harvest in the county. But after years of tediously harvesting potatoes by hand, Hoover began to envision a mechanical potato digger. During the winter of 1884-1885, he designed and constructed his first digger and used it to harvest his 1885 crop

Foreseeing the potential of his invention, he submitted a patent application in March 1885. The patent (No. 318,254) was granted May 19, 1885. According to Hoover’s patent application, the digger had “mechanisms for digging or removing the tubers from the ground, sifting and separating them from the earth, stones, weeds, and stalks, and delivering them at the rear of the machine, on one side, into a receptacle or upon the ground to be gathered up; the weeds are then discharged from the machine on the opposite side from the delivery of the potatoes.”

The ground-powered potato digger was pulled by a team of horses, thus exerting force over the ground. As the cleated wheels rotated, they powered the machinery. The digger could harvest up to 500 bushels – a full 8 acres – of potatoes per day. Hoover’s invention was so popular among his friends and neighbors that he produced 10 more diggers during the winter of 1885-1886.

In 1886, Hoover and his brother-in-law, Albert Prout, created the Hoover & Prout Co. to manufacture and promote the digger. In 1886, the partnership produced 50 potato diggers. Hoover formally introduced his invention to the world at the 1893 Chicago World’s Fair (also known as the Columbian Exposition). In 1898, Hoover & Prout received a gold medal for its digger at the Trans-Mississippi & International Expo in Omaha, Neb., and went on to show the digger at the 1901 Pan-American Expo in Buffalo, N.Y. In about 1910, Prout left the business for unknown reasons and moved to Cleveland. Thereafter, the business became known as the Hoover Mfg. Co. Hoover served as president and treasurer and his son, Arthur, was secretary and general manager.

Over time, Hoover’s potato digger became immensely popular. Considered by many farmers the best available on the market, it was regarded as reliable, well built and sturdy. By 1914, the Hoover Mfg. Co. at Avery employed 75 to 100 people, produced about 5,000 machines per year and shipped diggers worldwide. The factory occupied 4 acres.

In 1915, Hoover introduced its first 1-row potato planter; a 2-row planter was offered in 1917. The company also produced potato sorters for grading, cutters for cutting seed prior to planting, and fertilizer distributing attachments for potato planters. In addition, Hoover offered optional attachments for the digger. The digger could be ordered with a different size elevator or with an open raddle chain elevator. Other options included a set of rolling coulters most popular for harvesting sweet potatoes, road tires for easier transportation of the digger, and a picking attachment that allowed crates to be attached to the side of the digger.

Buyout marks end of an era

As tractors became more commonplace, Hoover responded with enhancements to the digger. By 1913, gasoline engines were mounted on diggers, providing power to actually drive the machine and taking the load off the horse, which then only had to pull the machine. During that period, Deere & Co., Moline, Ill., served as sole distributing agent for all Hoover products.

In July 1926, Deere bought out Hoover. The Hoover family retained possession of the factory at Avery and continued to manufacture Hoover products during 1926. In 1927, Deere moved production from Avery to a Deere-owned subsidiary, the Syracuse (N.Y.) Chilled Plow Co. For a time, Deere marketed the digger as the John Deere Hoover potato digger. Deere continued to update the digger, using the Hoover prototype as the basis for its potato machinery line.

In addition to manufacturing, Hoover was involved in the civic development of the communities of Milan and Lakeside, Ohio. Although potatoes were used to produce distilled spirits, Hoover and his son Arthur were ardent supporters of the prohibition movement in Ohio. Hoover continued to be creative and resourceful throughout his long life. In addition to his line of potato equipment, he also produced bag holders, weighing devices and a fruit/vegetable sorter capable of sorting 100 bushels per hour, the latter patented when its inventor had passed his 90th birthday.

Isaac Hoover died at age 96 on March 4, 1941. In his 1916 book, A Standard History of Erie County, Ohio, H.L. Peeke described Hoover in glowing terms: “He has prospered, and his success and prosperity have produced a permanent and far reaching benefit to mankind.” Further, he noted, Hoover helped “to lighten the burdens of crop harvesting and at the same time decrease the cost of production of one of the most common articles of food” through his invention of the potato digger. Through his creativity, business sense and service to the community, Isaac Hoover brought opportunity to people of Ohio and beyond.

Lisa Yako owns Historical Research Partners in Huron, Ohio. Though her research focuses primarily on historic homes, she occasionally delves into related topics. Contact her at

Virtual Tour of The Milan Museum

The historic Village of Milan is the birthplace of Thomas A. Edison and recognized by the National Trust as a Distinctive Destination. Visitors to The Milan Museum will learn a history rich in progress and creativity.