Originally built by Louis E. Palmer in 1896-97 to house his jewelry business, this building was later remodeled with a faux-Colonial front. In later years, the front sported plain siding, which completely covered the six windows and architectural details that once adorned it. A historic restoration of the original storefront was completed in 2010; John Dziurman was the architect of the project. 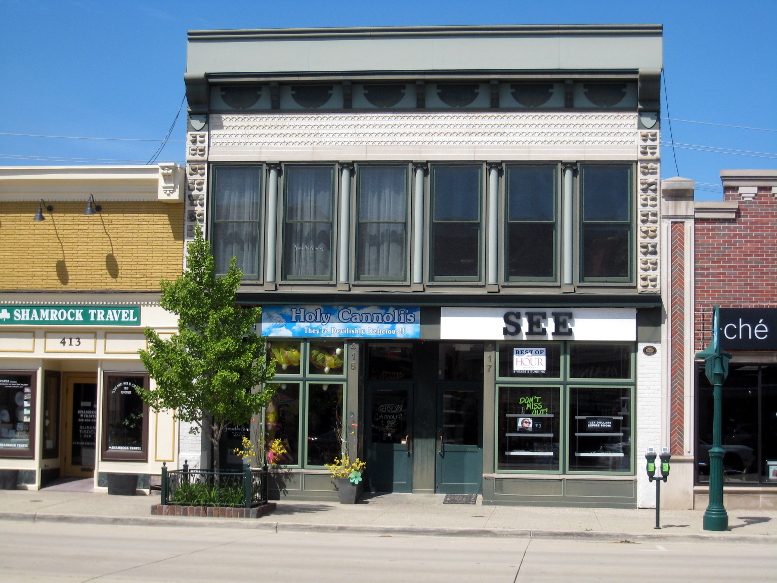 Louis Eugene Palmer was a Rochester jeweler who built several business blocks on Main Street. This double storefront was his last project, constructed during 1896-97. Palmer's store was located in the building and he occupied the apartment on the second floor at the time of his death in 1935. The Rochester Clarion said the following of Palmer upon his death:

Mr. Palmer was born at Addison, Mich., July 16, 1854, the son of John F. Palmer. He came to Rochester 52 years ago from Hudson, and since that time operated a jewelry store in Rochester. He had been in business here the longest of any merchant and will be missed by his business associates and others who knew him well for many years. Mr. Palmer saw Rochester grow from a little rural country town with grass growing on main Street to the fine village it is today. His expert skill as a jeweler and optician was widely recognized and customers came to him from distant points.

A paint and wallpaper store moved into the building in 1950, and in 1960,a faux-Colonial front was added to the building which obscured its architectural details and front windows.

Businesses at 415 South Main have included Brownell’s Grocery, Baldy Benson’s barbershop, Joe’s Barber Shop, Wayne Heating and Cooling, and Del Van Skiver’s Avon Photography. On the 417 side, House of Custom Colors came in 1950 and was responsible for a major renovation to the building in 1960. In 1960, the Rochester Clarion announced that current owner, Mrs. Clair Douglas of Goodison, planned to spend an estimated $5,000 to remodel the façade. “A new colonial-type front will be installed,” with the work being done by contractor Frank Rewold and Son, he newspaper reported.

The Colonial storefront was removed and the building was restored to its original 1896-97 appearance in 2010, using plans drawn by architect John Dziurman.