The Breezedale Historic District marks an early twentieth century residential subdivision along the southern end of Massachusetts Street. The developer, Charles E. Sutton, created the "Breezedale Addition" by building five similar homes in 1909 and 1910. This is considered the first attempt to create an identifiable suburban neighborhood in Lawrence. Seven contributing residences are among the fourteen contributing buildings which stand in the historic district. The homes are mainly in the Classical Revival architectural style. The National Register-listed historic district stretches from 2301 to 2401 on the west side of Massachusetts Street; it was listed in 2008 and has a period of significance from 1910 to 1945. 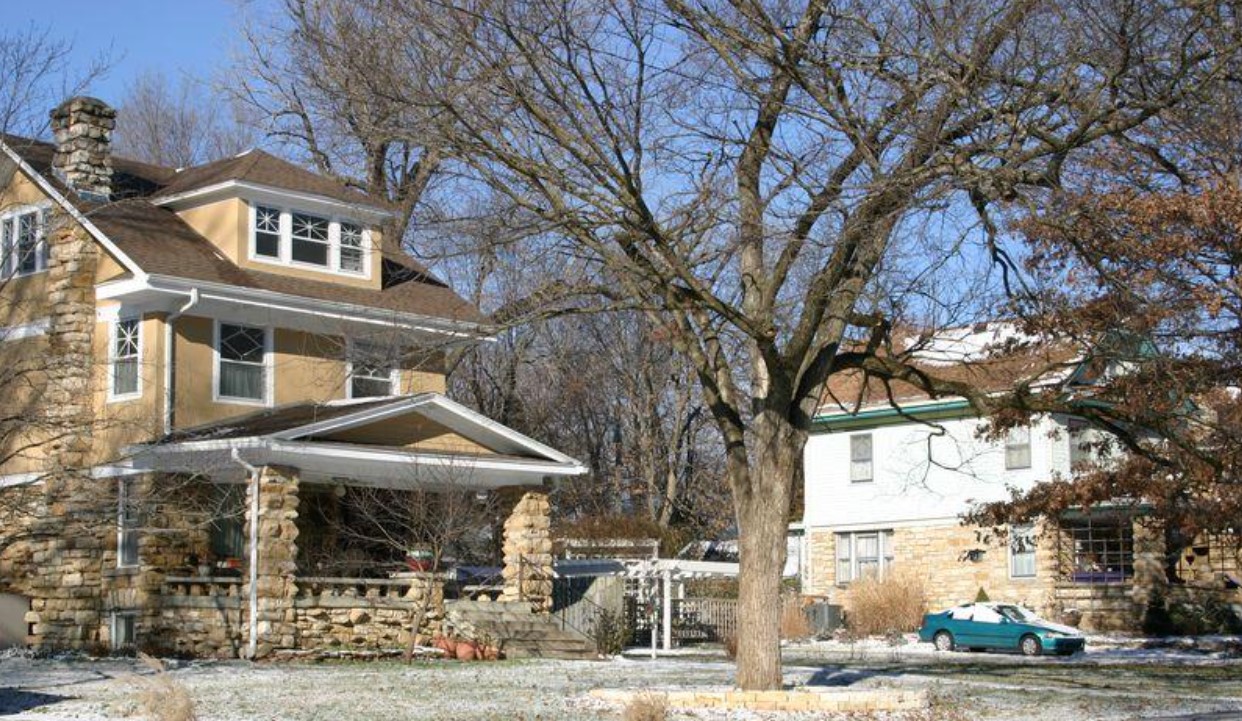 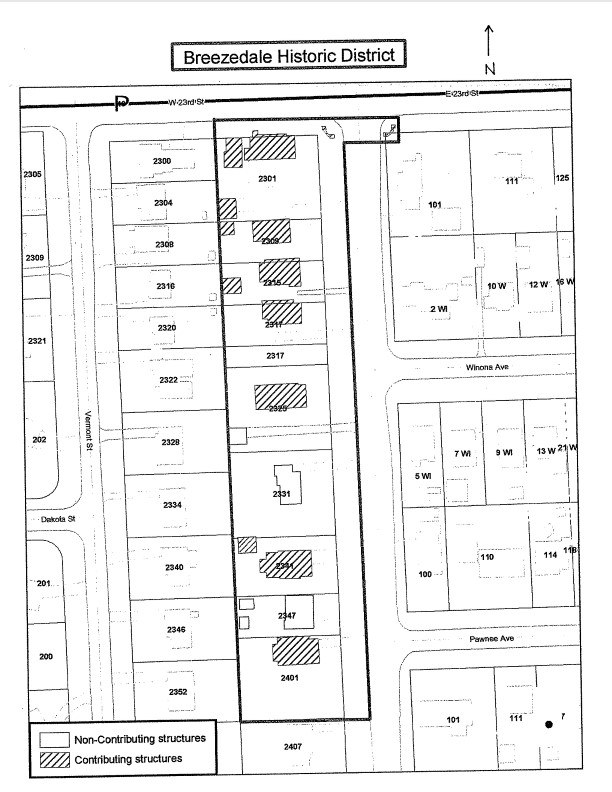 2008 photo of another two historic houses in Breezedale H.D. (KHRI) 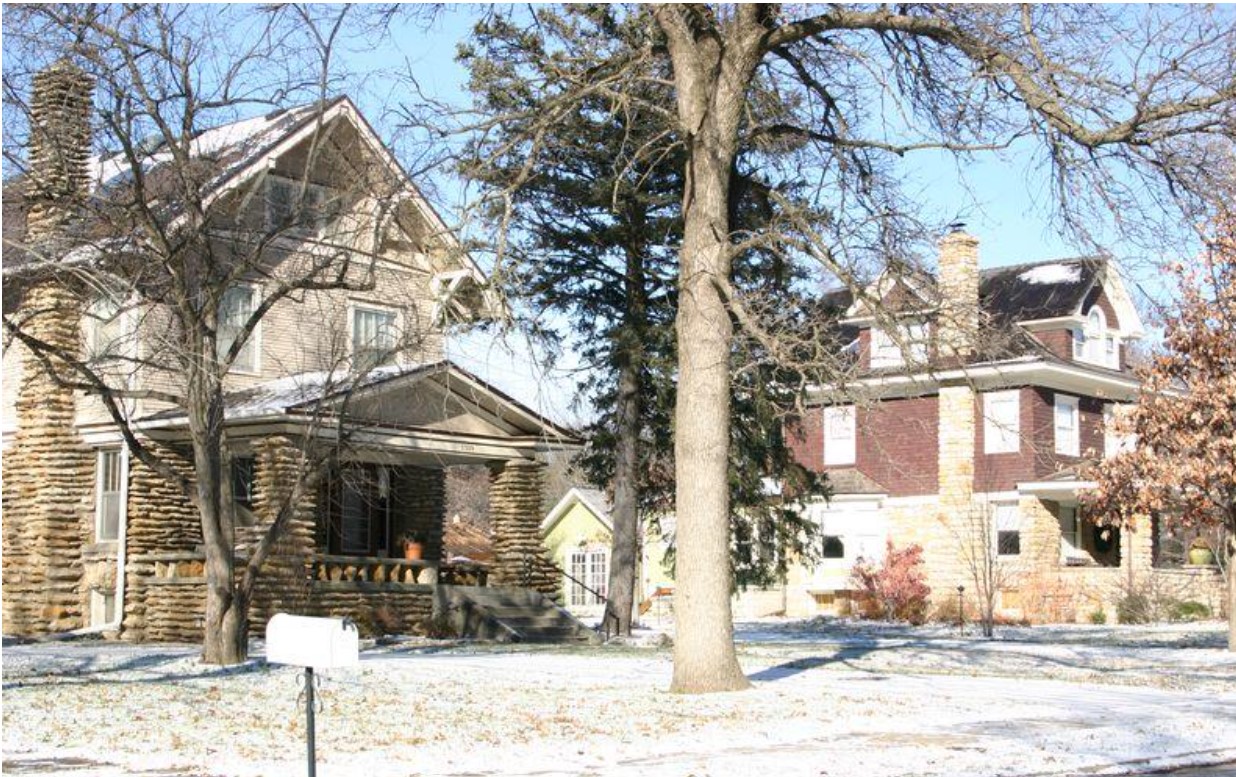 One of the first suburban neighborhoods in Lawrence is along the western side of Massachusetts Street, south of 23rd Street. The Breezedale Addition consisted of five homes built in 1909 and 1910. One of them, at 2325 Massachusetts Street, became the home of the developer, Charles E. Stratton. Others from circa 1910 are contributing to the historic district: the Carl A. Preyer Residence (2301), the Ada McPherson Residence (2309), the A.P. Baecher Residence (2315), and the L.S. Woolsey Residence (2317). Several of the homes are of stone and wood frame construction over a stone foundation. Additional contributing homes are: the William Kopp Residence (2341, ca. 1917) and the Albert and Leona Brewer Residence (2401, ca. 1911); since Brewer was a brick mason, he likely built his brick house himself. The remaining two homes on this side of the block (2331 and 2347) are non-contributing mid-century infill that post-date World War II. The non-contributing, modest houses on the east side of the street in this block date from the early twentieth century to 1970. Two contributing pairs of stone and concrete pillars 7 to 10 feet tall mark the entrance to the neighborhood on either side of the 23rd Street intersection, with one labelled "Breezedale" and one topped by a modern metal cross. Renovation and partial restoration of the entrance monuments won an award from the Kansas Preservation Alliance.

The contributing houses are part of what has been called the "Comfortable House" with a multitude of styles that became popular in American suburbs from 1890 to 1930. Typically, the suburban houses of Lawrence do not fit a particular style, combining forms and ornament. One example seen in this district is the Foursquare home, a two-story house two rooms wide and two rooms deep, with a pitched roof. Another example is the Bungalow home, a one or one-and-a-half-story house with a roof extending from the house over a wide front porch. Ornamental elements may be borrowed from formal styles like Craftsman, Prairie, or Neoclassical.

The National Register listing is part of the multiple property listing of Historic Resources of Lawrence. The neighborhood is significant for its association with the suburban development of the town and for its examples of architectural styles. A September 1909 local newspaper article mentioned the "five handsome modern residences" nearing completion at Breezedale "built upon the latest architectural design" and "as fine as any residences in the city."