The gaol was used to hold prisoners in between court days. It was typically not used as a punishment, but mainly used as a detainer for accused criminals until they could be tried. The court at Hanna’s Town practiced English Common Law. Court was held four times a year and went on for weeks at a time. During quarter sessions, spectators from all over the county came to witness the trials. The punishments varied and Hanna’s Town was subjected to the pain and humiliation of the punishment devices. The two main forms of punishment were the pillory and the whipping post. 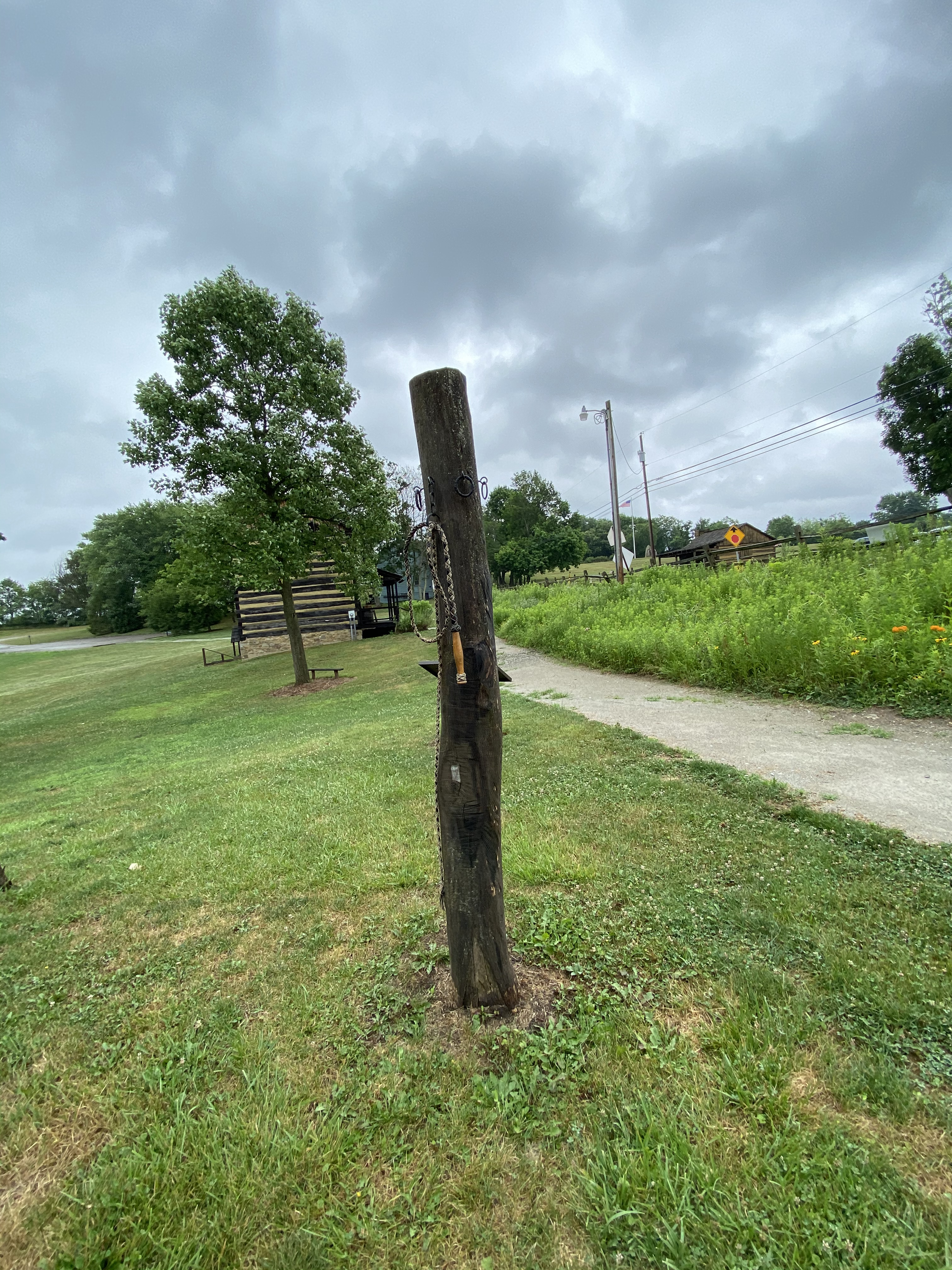 The pillory, outside of the Gaol 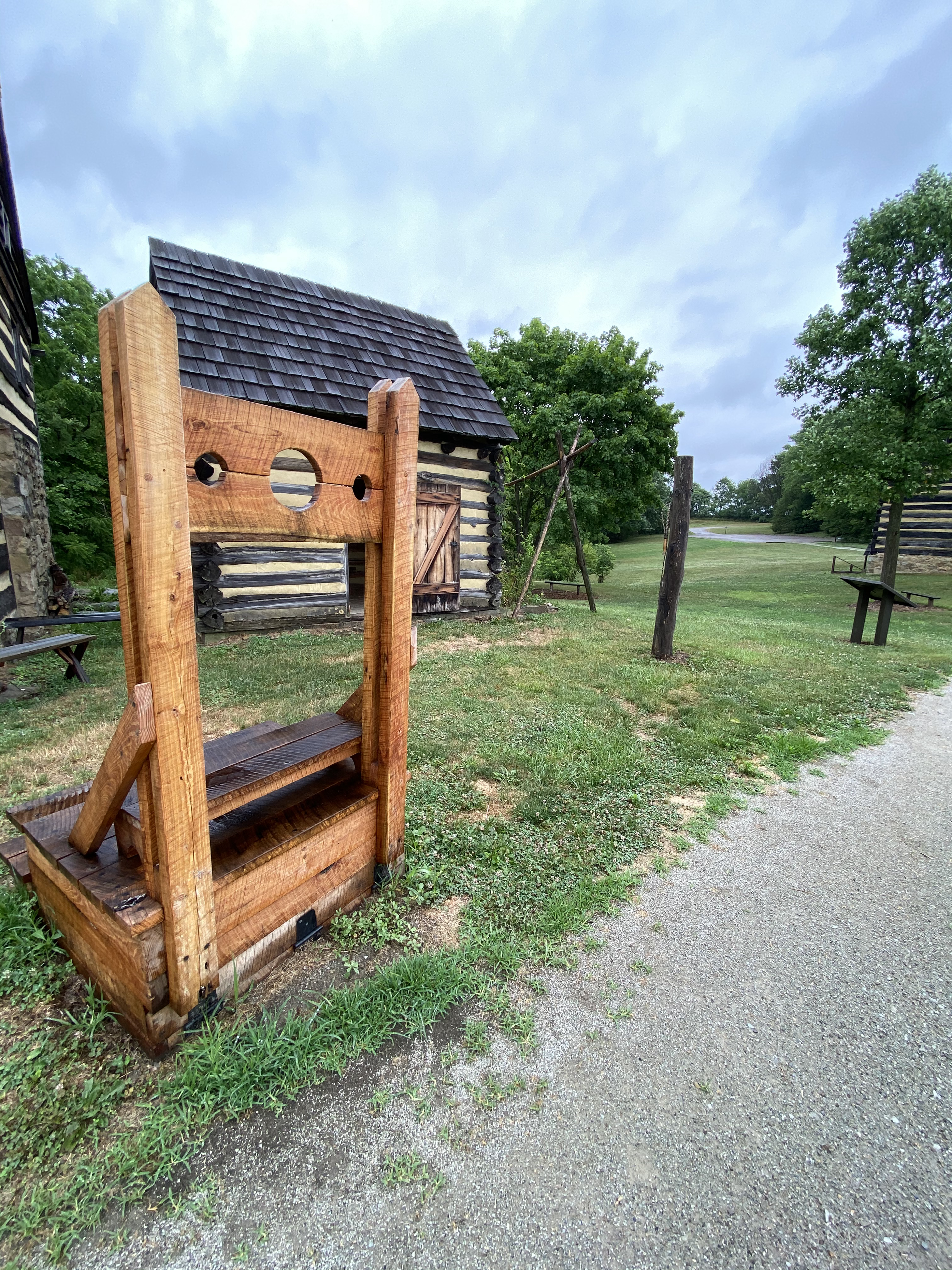 The pillory, in front of the Gaol/Tavern 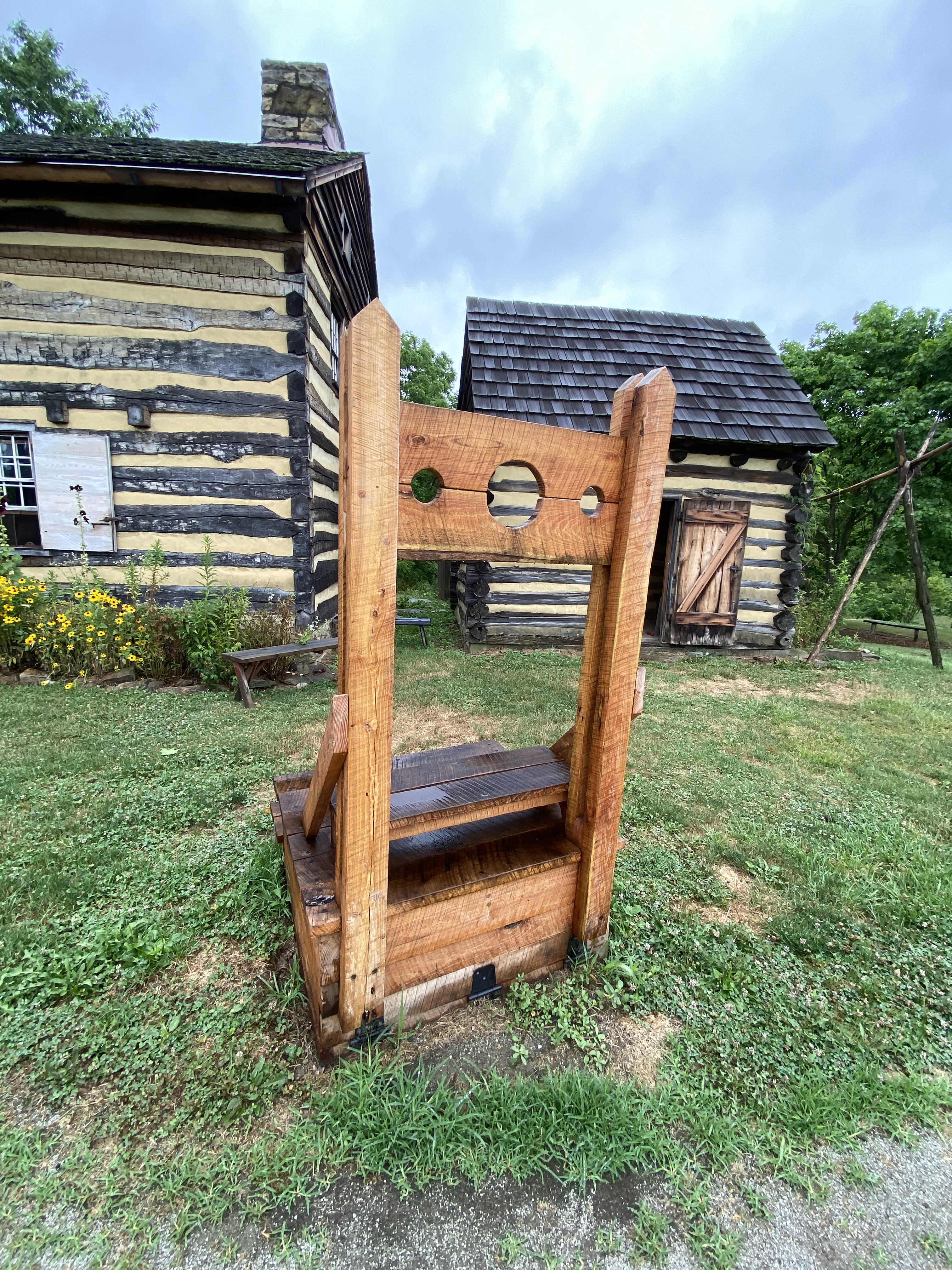 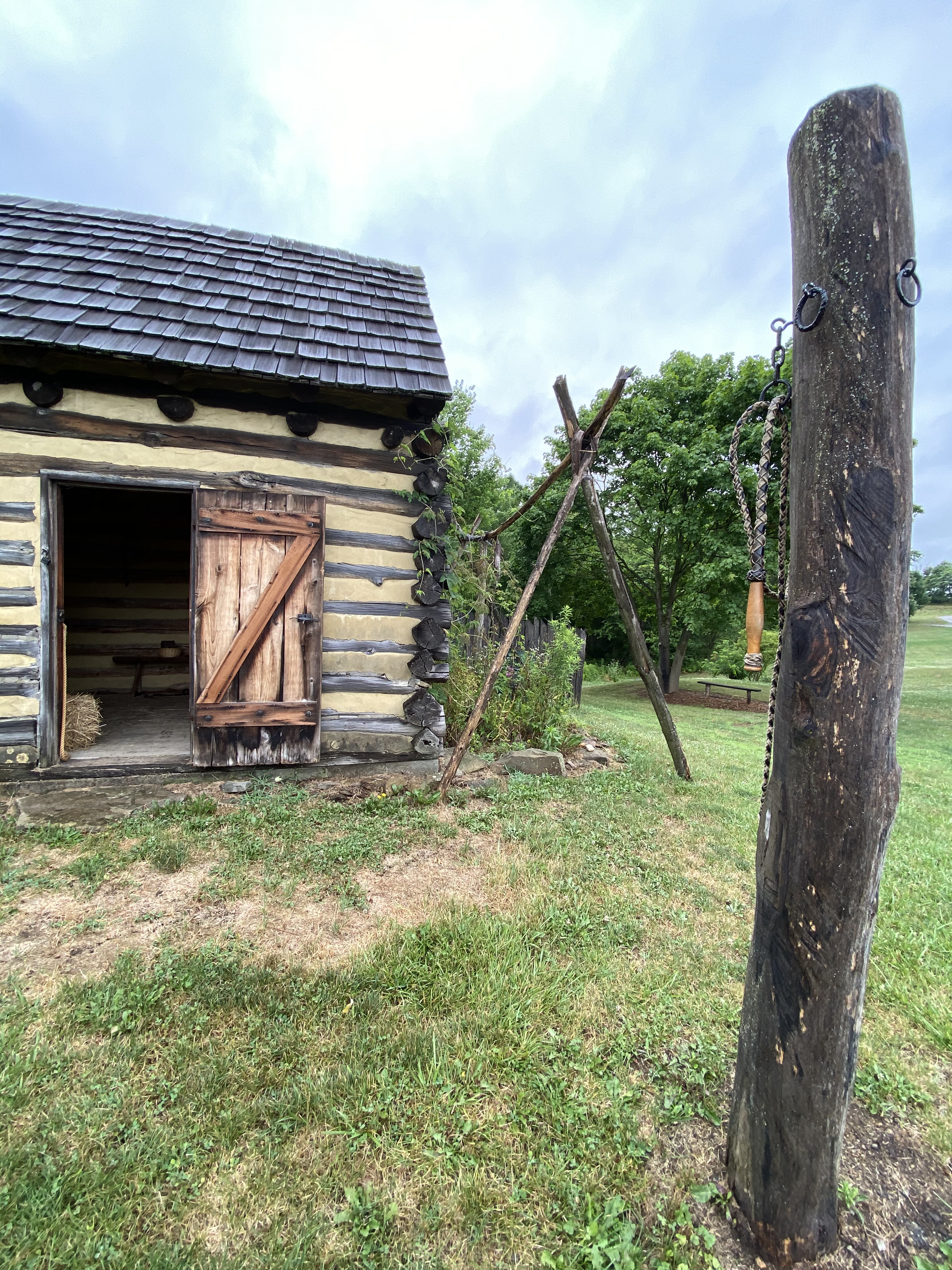 Crime and punishment were treated differently from our legal system today. The judges serving in the courts were hardly trained/educated in law. Although they were appointed by peers, this made it more like a role of upstanding citizen than it was an actual practice. Punishments at Hanna’s Town were a common means of keeping order. Hanna’s Town had a pillory and a whipping post as the chosen methods of punishment. The town and people did not have the means to feed and provide for a prisoner in jail for long periods of time, so jail time was not a common form of punishment. The punishment was given to the prisoner in a timely manner and they were sent back into the community. It was more common for fines or subjected labor for a fixed amount of time to be a punishment.

The pillory was a mode of public humiliation meant to shame the convicted into ceasing their unlawful habits. It was used for lesser crimes such as petty thievery or if an indentured servant was disobedient. One’s head and hands would be locked in the top with two wooden boards to enforce the lock. Some people were put in there for a few hours, sometimes even a day. English Common Law allowed people passing by the ability to throw one stone at the convicted while in the pillory. This law was not entirely enforceable, so people tossed rotten food, mud, and feces at those serving their time. More severe criminals would serve time in the pillory along with being assigned a certain amount of lashings on the whipping post or have their ear nailed to the pillory and have it cut off.

The whipping post is another punishment device here at Hanna’s Town. The criminal would have their arms chained above their head and faces towards the post. Their shirt would be torn off of their backs, which in itself is a punishment. Many lower/middle class colonial families had a limited set of clothes for most of their life, so having one’s clothes destroyed was more than a minor inconvenience. The whip could have pieces of metal or glass in it to really tear through the skin on someone’s back. Wounds from whips like these took a long time to heal and sometimes, they never did. Anyone who had committed a crime worthy enough, would face the whipping post for punishment.

Hanna’s Town court cases ran from the late colonial period into the beginning of the republic, predating any written documents that gave prisoners or criminals rights. Hanna’s Town records show that a clerk recorded each trial along with the outcome. During the destruction of Hanna’s Town, the clerk took the time to gather and carry the records from the court days of the current session and the records survive because of this action.

The degree and types of crime that happened at Hanna’s Town varies. Some of the lesser crimes tried at Hanna’s Town include one case of forcible entry. According to “The Law of the Commonwealth” under Chapter 9, it states that any person accused of forcible entry must give the stolen goods back or pay retribution of those goods to the victim. Adultery was a more serious crime. One case of adultery in Hanna’s Town was recorded by the court. According to Chapter 3 of “The Law of the Commonwealth”, guilty adulterers were sentenced to 21 lashes on the bare back, well laid on and a year of labor. The phrase, ‘well laid on,’ described the whippings to be merciless and tough, in order for the criminals to learn their lesson. Repeated offenses meant the punishments were even harsher. For a repeat offense of adultery, the convicted were sentenced to 21 lashings and 7 years of labor. A third offense was the same but with the addition of branding an ‘A’ on their forehead, standing for the word ‘Adulterer’.

A more major crime in Hanna’s Town was that of horse thievery and there is one recorded case that involves a horse thief, a felony in the 18th century. It was considered a felony because livestock was so valuable to the community. Horses were especially valuable for transportation. With the nearest settlements being about a week's travel on foot, a horse was necessary to travel fast and efficiently. Registered in the court under the name John Smith, the thief was found guilty of stealing a horse and was sentenced to 39 lashes, well laid onto his bare back at the whipping post. He was then put into the pillory for 24 hours, where his ear was nailed to the wood and later to be cut off when he was released. He then would be forced to either pay a fine of 20 or return the stolen horse. Second time offenders of horse theft would be the same in addition to the letters ‘HT’ being branded on their foreheads, which stood for ‘horse thief’. The reason for the branding was to alert other towns and settlements that this person was untrustworthy. Taverns and tradesmen would avoid and turn down service to this person if spotted.