Built in 1886 by Francesca G. Garcia, the Garcia Opera House was used for various social event in Socorro, New Mexico, such as masquerades and theater performances throughout the late 19th century and early 20th century. The adobe building features some unique architectural designs, such as slanted walls and a "rake" stage. The slanted walls make the building look like it is about to collapse, but the walls were purposely structured that way to strengthen the building and improve its acoustics. The "rake" stage is slanted from the rear to the front, allowing the audience to see the entire stage. In 1974, the Garcia Opera House was listed on the National Register for Historic Places for its one-of-a-kind structure and its contributions as a center of entrainment for the Socorro community. Eventually, the building was acquired by Holm Bursum III, who later restored the building to its former glory. Today, the building is still utilized for social and community events in Socorro. 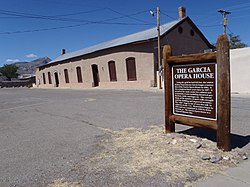 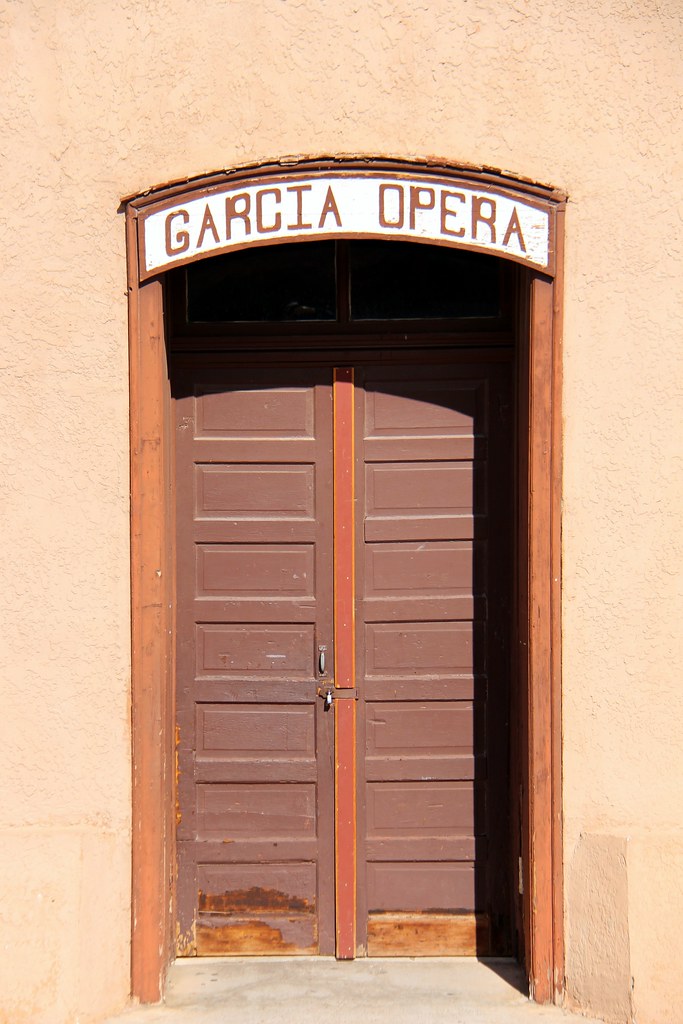 The Garcia Opera House was built in 1886 by socialite and leading citizen of Socorro, Francesca G. Garcia. Garcia was the widow of Juan Nepomuceno Garcia, and the couple's combined lineage is linked back to Spanish pioneers who settled in Socorro. After Juan's death, Francesca inherited his gold and used it to build and name the house in his honor. As an advocate for the arts and performance, especially for opera, Garcia had strong hopes that opera troupes would come and perform at the house, but there are no records to show that any sort of operatic performance was held at the house. In 1888, the house was mortgaged under a deed of trust as a collateral to guarantee from paying debts.

There are similar transactions that Garcia has made to the house through her second and third marriages. Before her death in 1911, she paid off the house's mortgage and deeded the property to Abran Abeyta. The house's name was changed for a short period of time, but the house's original name returned after it was required by Holm Bursum. Bursum was a very prominent political figure and civic leader in Socorro, who later served as the senator of New Mexico between 1921-1925.

For a 50 year span, the Garcia Opera House served as an entertainment center for Socorro. The space was used for theater performances, masquerade balls, political rallies, school functions, and other social events. The adobe house's design exhibits the Neo-Greek architectural revival, which was introduced in the midwest before making its way to the frontier. The house features two unique design elements that make it stick out form other buildings, the slanted walls and the "rake" stage. The walls in the house are slanted, giving the house the appearance of it toppling over, but it was designed that way on purpose. The curved walls strengthen the house and improved its acoustics, meaning that sound can be carried throughout the house. The "rake" stage is slanted from the rear to the front, giving the stage a "rake-like" appearance. The stage's design allows the audience to see the entire stage no matter where they sit.

Around, the 1940s, activities were becoming less frequent at the house, which lead to the house's closure. Over the years, the house did show signs of deterioration due to it being used as a storage facility for the the B&M Feed and Supply Company. Later, the house was later used as a general warehouse. Later, Holm Bursum III, the grandson of senator Bursum. In 1983, Bursum received funds from the new Mexico Historic Preservation Bureau and other civic organizations, such as the Chamber of Commerce, the local Art League, and the Garden Club to restore the house to its former glory. In 1985, the house's restorations were completed, and the house opened to host community events. In 1974, the house was listed on the National Register for Historic Places for its one-of-a-kind structure and its contributions as a center of entrainment for the Socorro community.