The Baker & Hiatt Building, which later became the Rarey Building, presently known as the Morris Building, was erected in 1894. It was the fourth brick building built at the relocated townsite. Baker and Hiatt opened a general merchandise store there in 1897. The Baker & Hiatt Building had a hall on the second floor which was used as a theatre of sorts. Four platforms were used for the stage – set on sawhorses with upright posts hooked together. Traveling shows played in this hall. About 1896 or ’97 the first motion picture was viewed here, a film depicting a train robbery. The “movie” was shown at the end of the vaudeville. When A. Z. Wells and Alfred Morris dissolved their partnership in the hardware business in 1914, the Morris hardware moved into the former Baker-Hiatt, or Rarey Building, and continued in business until 1964. The “Morris Building” was given to Wenatchee Valley College and later sold to Bob Salmon. The building has been extensively remodeled into a mini hall at 23 S. Wenatchee Avenue, and currently houses a number of business and professional offices.

The Baker-Hiatt building as it looked upon it's completion in 1894. 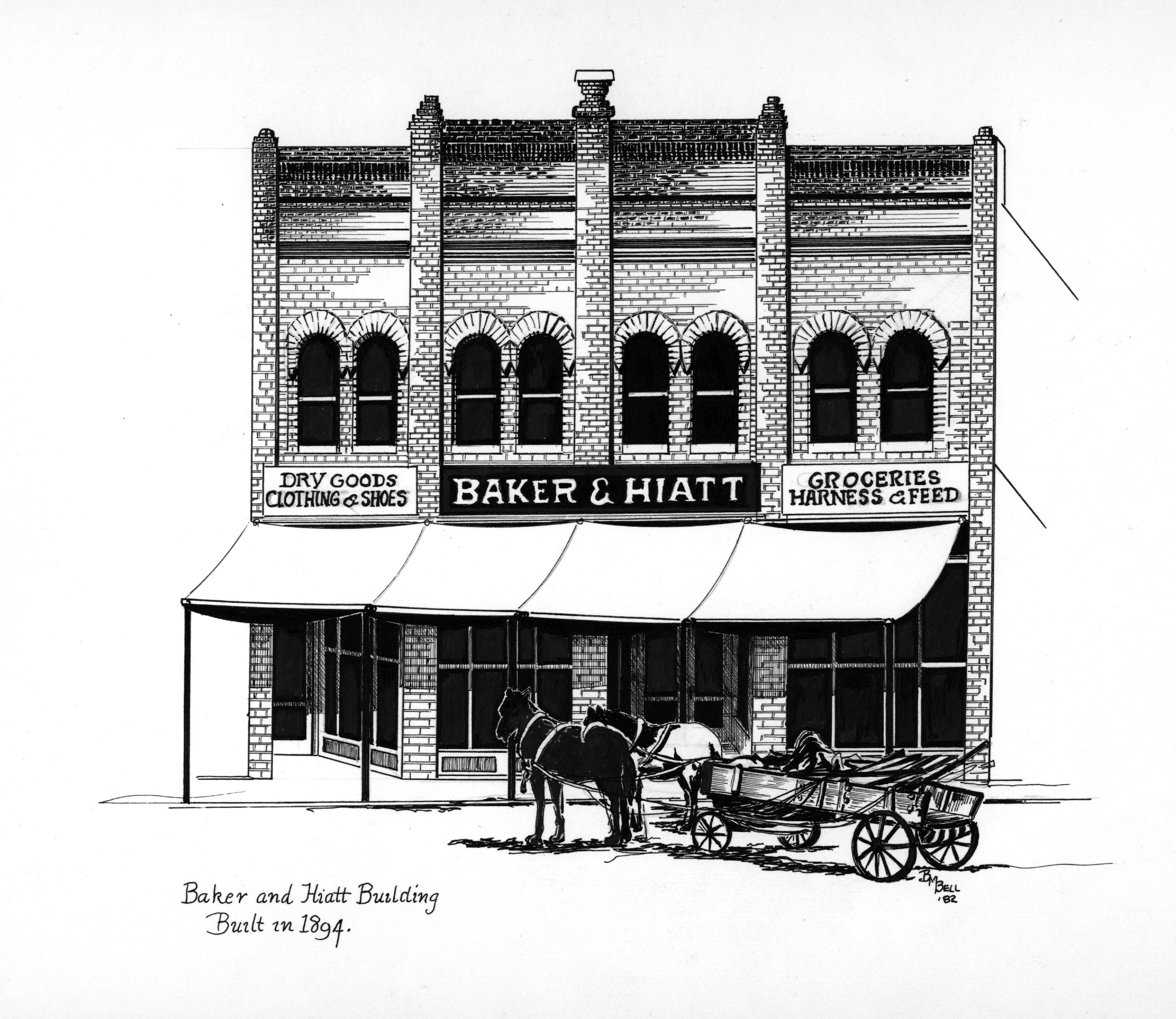 Black and White Photo of Baker and Hiatt building, 23 South Wenatchee Avenue, fourth brick building constructed at in the relocated town site of Wenatchee. Opened for business in 1897 with W. T. Rarey as manager. James Edward Ferguson was his one and only clerk. Others in the picture are Robert A. Farmer, head of the United States Geological Survey, and his crew. They mapped this section, establishing the elevations in the Lake Chelan and Methow Valleys, Waterville, Wenatchee and Lake Wenatchee sections. Ed Ferguson, third from left, was a member of the crew. It is noted that the evergreen trees may have been brought in as Christmas decorations. 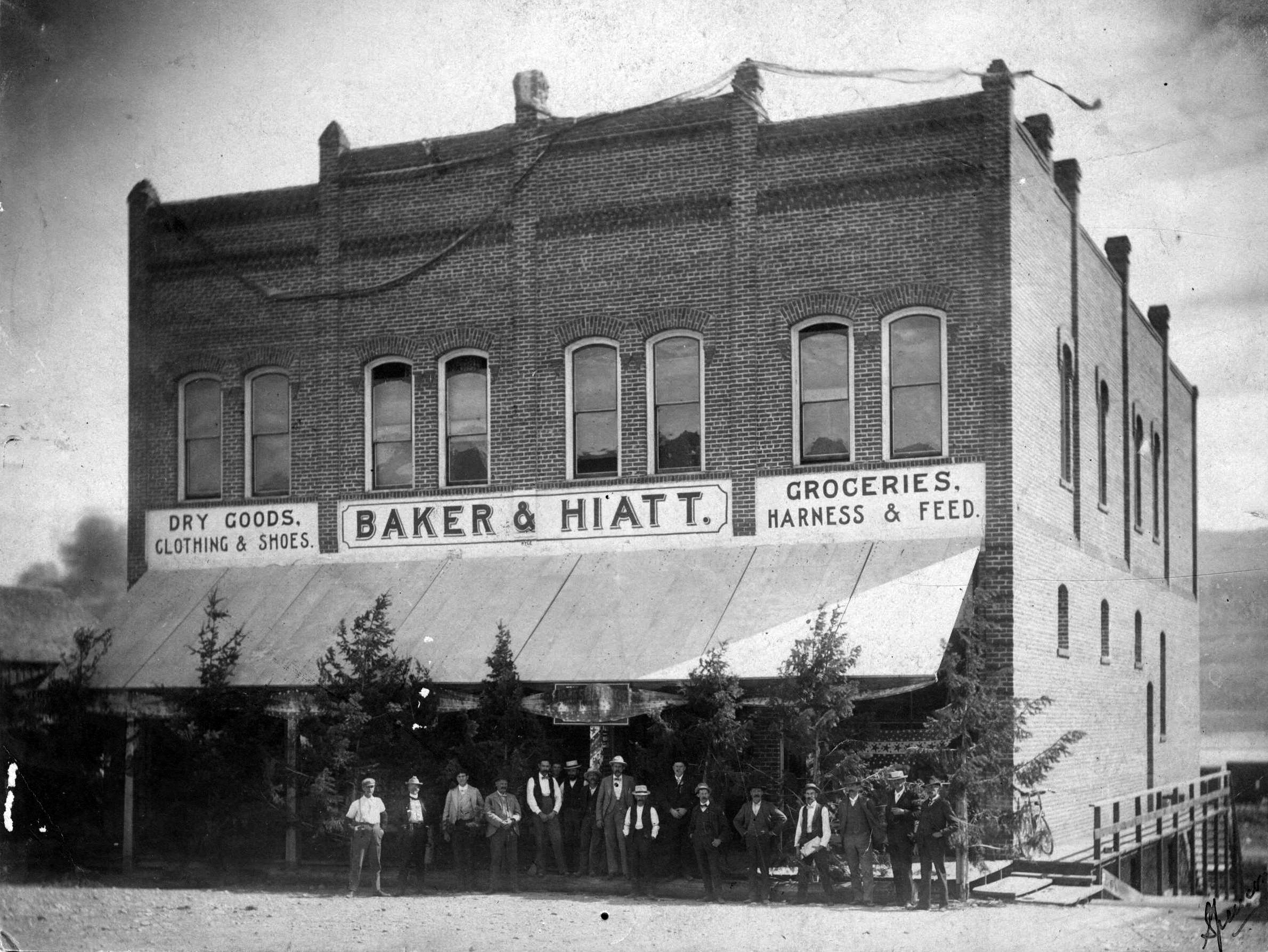 A "new "facade was put on the building in 1967 This facade was removed again to restore a more historical facade. 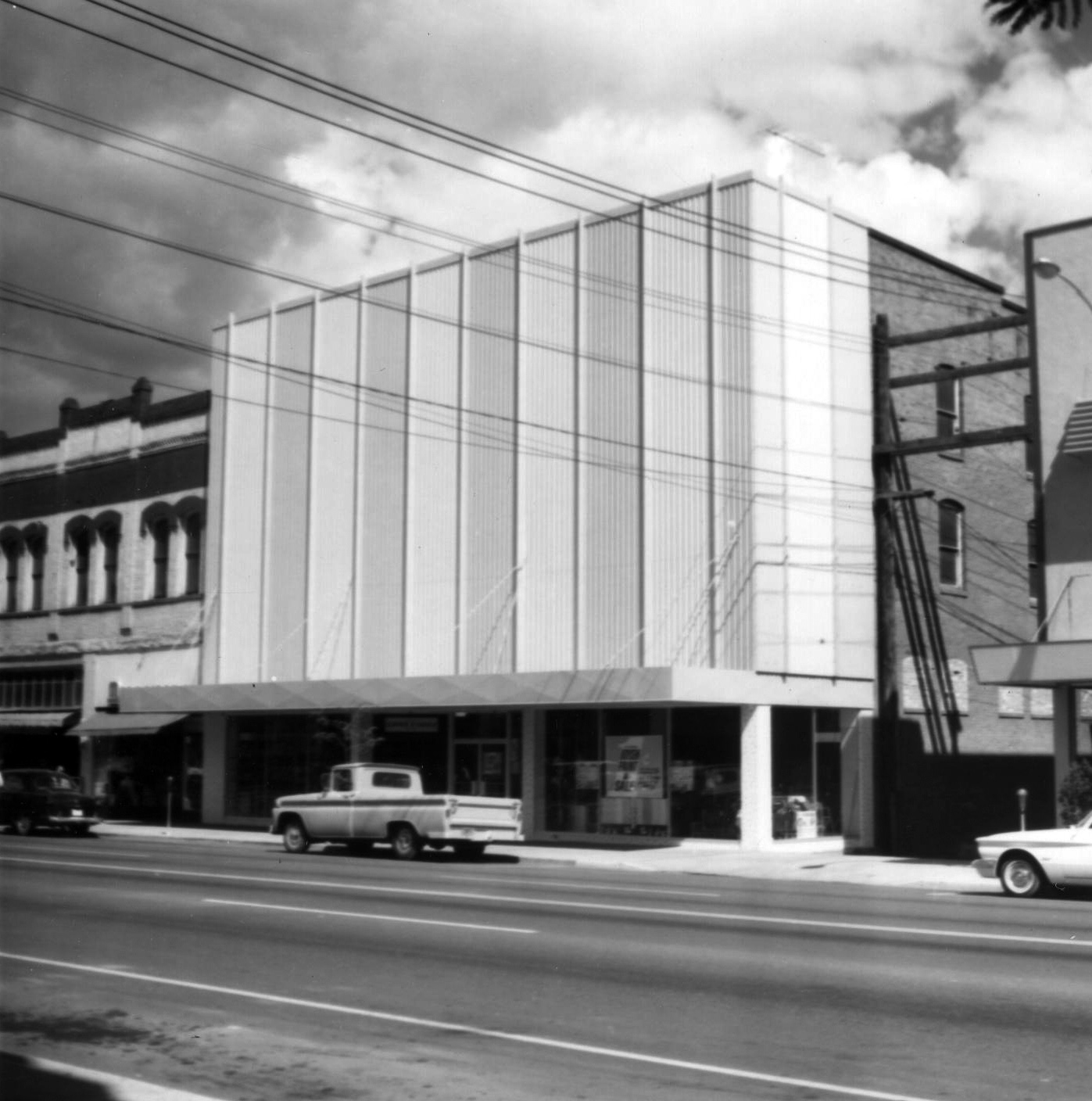 This building is now known as the Morris Building, named for hardware magnate Alfred L. Morris. The site has had several incarnations. Originally the Baker & Hiatt general store, opened for business in 1897 in the fourth brick building constructed in Wenatchee. With William "Taz" Rarey as manager, the store advertised dry goods, clothing, shoes, groceries, harness and feed. The building had a large back room which served as a meeting and social hall. Emil Frank's Central Meat Market sold fresh and cured meats in the Baker-Hiatt Building for several years; other early tenants included a carriage storage facility, billiards hall, bowling alley, tobacco store and from 1899 to 1922, a post office.

Rarey briefly operated a saloon a few doors north, at 7 South Wenatchee Avenue, before purchasing the Baker-Hiatt, which then became known as the Rarey Building. In The 1914 Polk Directory the Pearl Grocery occupied the building, advertising "The most up-to-date stock of groceries, fruit and vegetables in the city. We give you guaranteed goods and prompt delivery.

Al Morris and his uncle Alfred Z. "A.Z". Wells, who was just 8 years older than Al, came from South Dakota to Wenatchee in 1902. At the time the only hardware store in town was Frank Scheble's, at the corner of Mission and Orondo streets. Morris and Wells purchased the business and within a few months moved to a larger space, a newly constructed two-story brick building at 15 South Wenatchee Avenue. With the rapid increase of the orchard industry and recently completed Highline irrigation canal, the Wenatchee Valley's demand for orchard machinery and irrigation equipment was high. Wells & Morris Hardware thrived until 1914 when the two men dissolved the partnership. Morris kept the store and while Wells developed his and his nephew's large orchard holdings north of Chelan. (Wells later re-entered the hardware business with Jim Wade.)

in 1920 Morris bought the lot at 23 South Wenatchee Avenue, next to the alley, and constructed a three story building. Morris Hardware became Wenatchee's premier hardware store featuring "hardware, galvanized irrigation pipe, sheet metal works, plumbing and supplies, paints, oils, glass, building material, wagons and harnesses." Morris married Mary Steiner, the daughter of prominent Waterville attorney R.S. Steiner, in 1922. Although they had no children of their own, Al was fond of kids. He donated the grounds and money for equipment for the little league park on Cherry Street, and was a major supporter of the Appleatchee Riders Club. A baseball fan, Morris sponsored a team i the town league for several years; the Morris Hardware team won many a championship. Morris leased part of the building to a restaurant and C.J. Breier general merchandise in the late 1920s to late 1930s and to Mode O'Day women's weare from 1938 to the late 1960s. Al Morris passed away in 1968. Around that time the hardware store was dissolved and the Morris Building was modernized with marblecrete and aluminum; Cusick's Inc. was the contractor. It has been the home of many businesses since then, including Berg Furniture, Grant Leather and Saddle Shop, Detwiler's Furniture, The Jewel Box, the Little Art Gallery, Pacific Trails Sportswear, Farmers Home Administration, Catholic Family Services, Columbia Designs, and Coylar's Jewelry. Bob and Audrey Salmon, current owners of the building, remodeled it to restore a more historical appearance.