Built in 1920, the Bernard J. Beimer House exhibits structural features that are unique to what is commonly seen in Taos, New Mexico. Instead of using adobe as building material or following a Spanish Revival or Pueblo architectural design like other houses in Taos, Beimer (1886-1953) took inspiration from his German roots in structuring the two-story side-gabled house. Beimer used the German architectural building techniques of fachwerk and nogging for the house. Fachwerk is a wooden framework, and nogging is the use of different materials to fill the empty interstices. Instead of using metal nails and brackets for the framework, Beimer carved notches and pegs into the timber pieces of the framework and connected them together. In addition, Beimer planted several tress around the front yard to give some distinction to the property. After the house was built, it served as Beimer and his family's home for several decades. In 2006, the house was listed on the National Register of Historic Places for its rare architectural style and design. 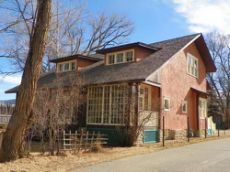 The General Profile of the House 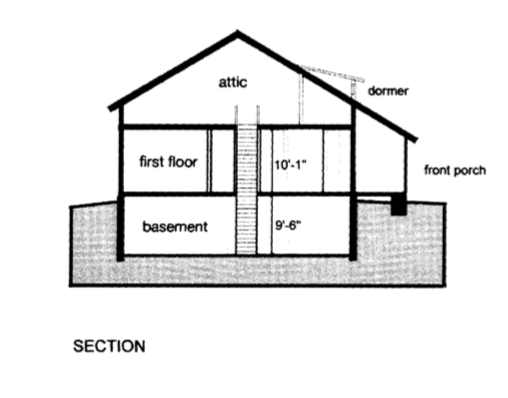 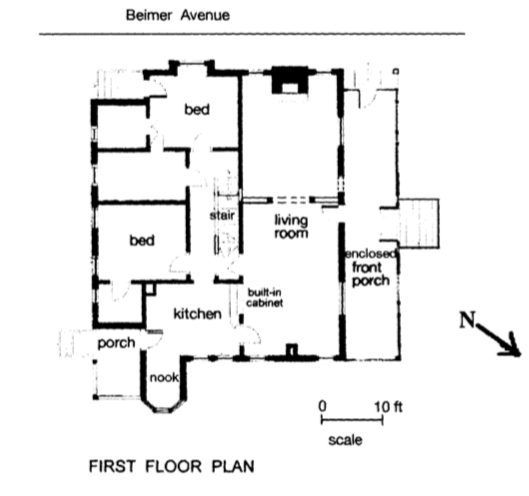 Bernard J. Beimer was born in 1883. Beimer's ancestry originated from Germany, and his grandfather came to the U.S. from Hosman, Westphalia, Germany in 1842. Not much has been documented about his childhood or his adolescence. In 1906, Beimer was employed as a fireman in Colorado when he was 23 year sold. He was stationed near the Atchison Topeka and Santa Fe Railroad. In the same year, Beimer met and married 19 year-old Marie Christine Swanson, a Swedish-American citizen of La Junta, Colorado. Once the couple married, they moved to the mining town of Elizabethtown to begin a family. In 1920, Beimer built his two-story side-gabled Taos residence for his his growing family, which included him, Marie, and their five children, Carl B. (Jack), Sam, George, Blanche, and Joe Anthony. 13 years after the house was built, Beimer and Marie signed their names as proprietors of the property. According to the 1930 U.S. Census, he was working at a coal yard. In 1953, Beimer passed away at the age of 70.

When Beimer was constructing the house, he did not use the typical adobe building materials or the Spanish Revival or Pueblo architectural designs like most houses in Taos during that time. Instead, he was heavily inspired with his German roots, and he used the German building techniques of fachwerk ("framework" in German) and nogging. Brought to the U.S. by German immigrants to the U.S. Midwest during the 18th and 19th century, fachwerk is a wooden framework, and nogging is the process of using different materials to fill the empty interstices. The interstices are usually filled with stone chips, brick, rubble, wattle-and-daub, sun-dried mud bricks, and tightly packed clay and straw. Another interesting feature of the house was that Beimer did not use metal nails or brackets to join the timber pieces of the fachwerk together. Instead, Beimer carved notches and pegs into the timber and connected the pieces together. In addition, square heavy timbers serve as continuous posts and girts used to hold up the second floor beams.

The house's foundation is made out of stucco-cement. The house includes various interior and exterior features, such as a boxed-in staircase with a straight run, built-in cabinets, a basement, an attic, an indoor porch, and two dormer windows protruding from the gabled roof. To give the property some more distinction from other house, Beimer planted some trees around the from yard. In 2006, the Bernard J. Beimer House was listed on the National Register of Historic Places for its rare architectural style and design in Taos, New Mexico.