Lake of the Woods Covered Bridge

After the purchase of an 80-acre tract of land west of the Sangamon River in the 1960s, the Lake of the Woods Covered Bridge was constructed to connect the two sides of Lake of the Woods Forest Preserve in Mahomet. In 1965, the Lake of the Woods Covered Bridge was dedicated in honor of Harold Moon, then Lake of the Woods Superintendent, who directed the actual construction. The Covered Bridge was a replica of the 18th century American Pepperell Bridge near Boston, MA and was designed by German Gurfinkel, a Civil Engineering instructor at the University of Illinois. Modern steel beams and cables were incorporated to aid with expansion and contraction of the bridge. In 1996, major repairs and renovations were made to the bridge. The base of the bridge was reinforced to prevent erosion, the entire deck was replaced, and the walkway area was widened as part of the newly-constructed bicycle-pedestrian path. The bridge continues to be a popular destination for visitors to Lake of the Woods. The construction took 18 months and cost $55,000. The bridge was 140 feet long and 32 feet wide and was made of southern pine and Douglas fir. The dedication ceremony went off on schedule even though there were construction interruptions from two floods and delays in receiving lumber from the South. 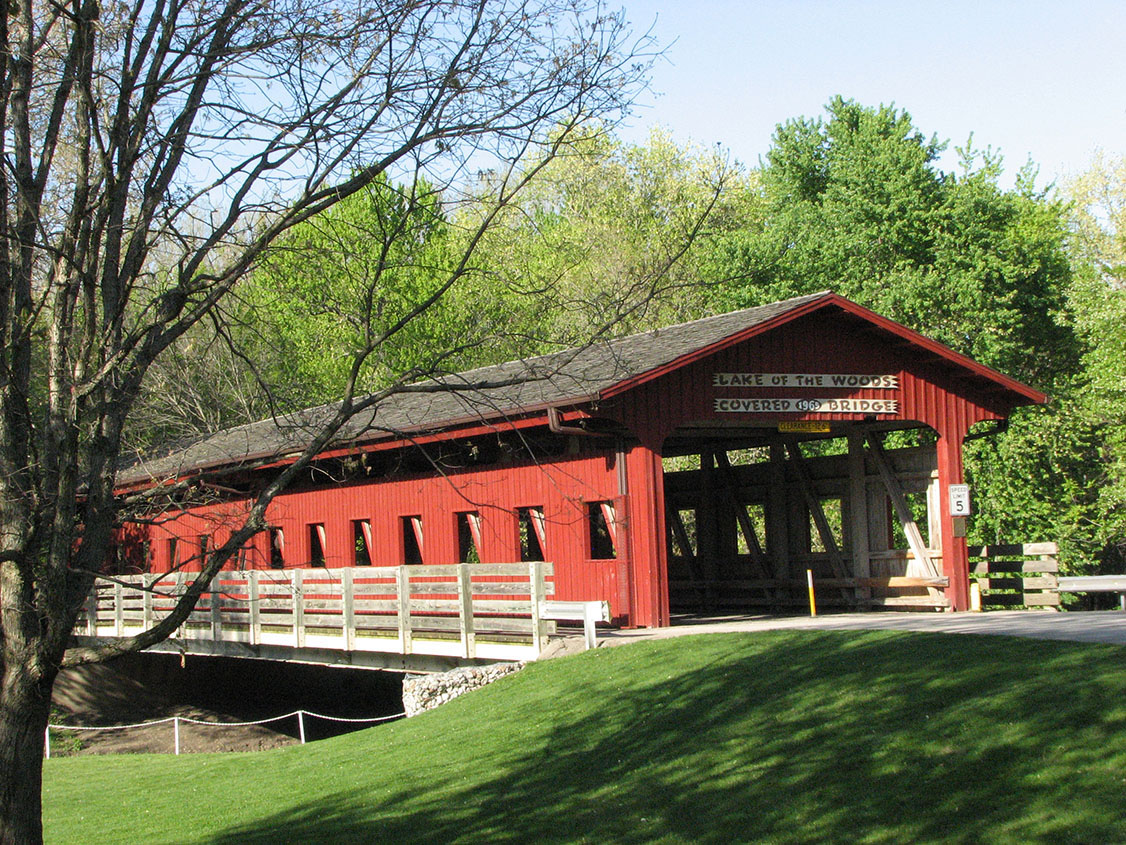 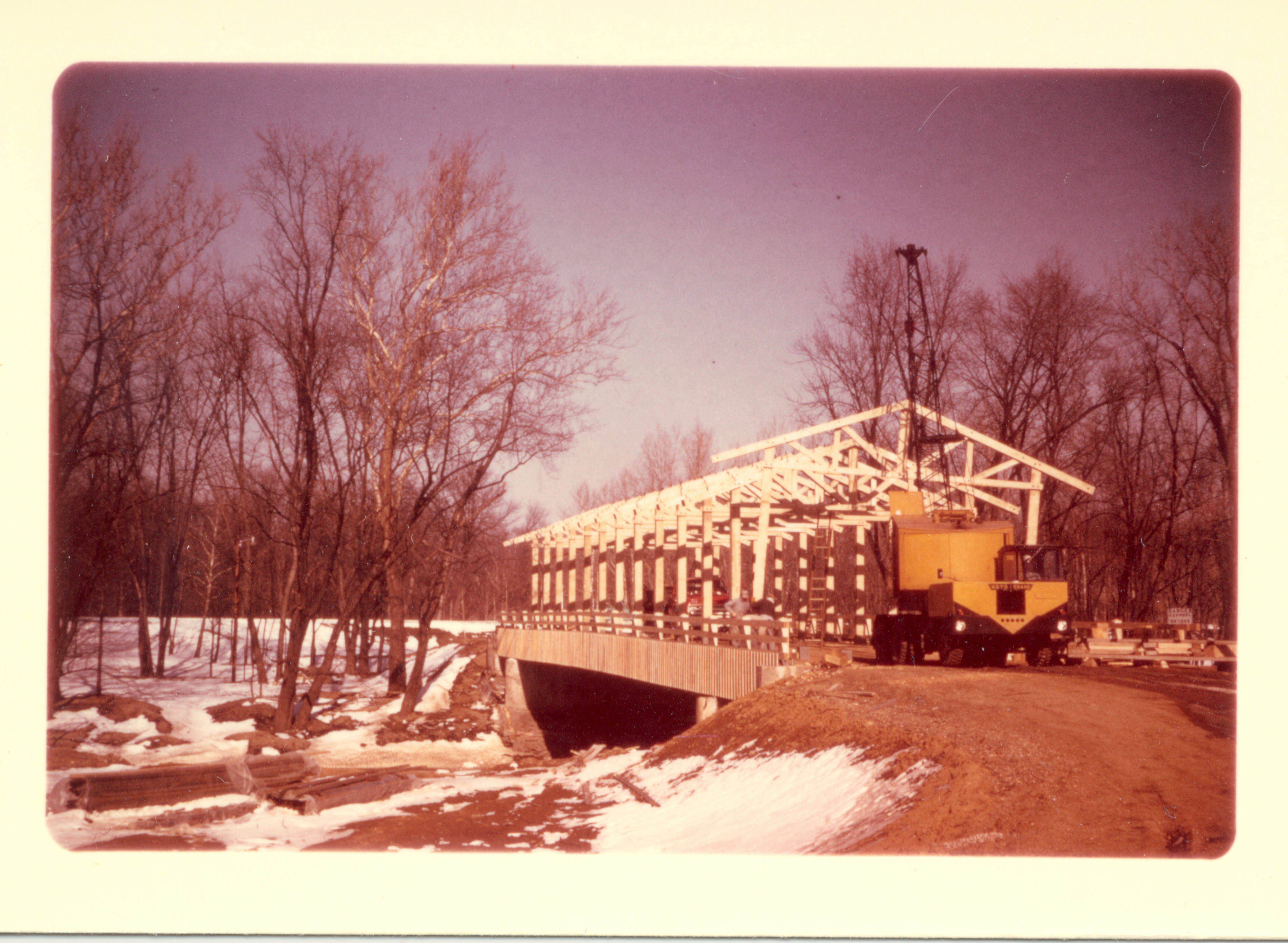 Dedication of the Lake of the Woods Covered Bridge with HI Gelvin speaking. 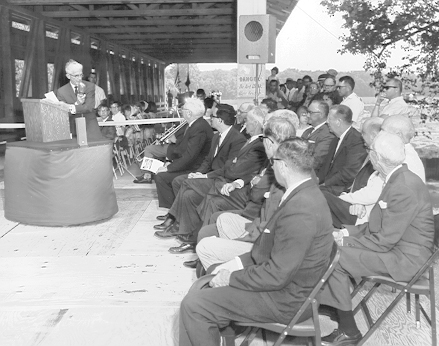 From the Sangamon River 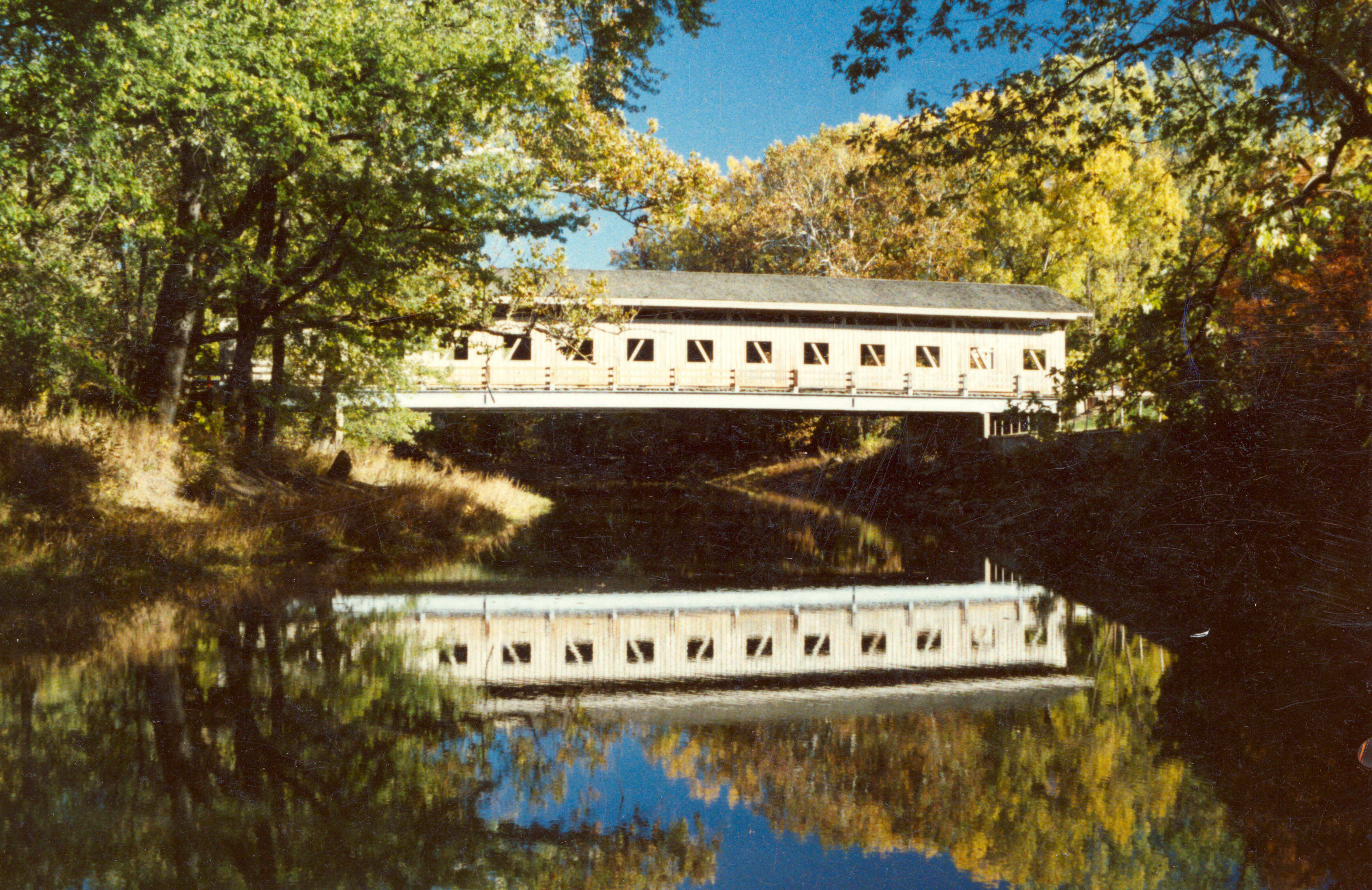 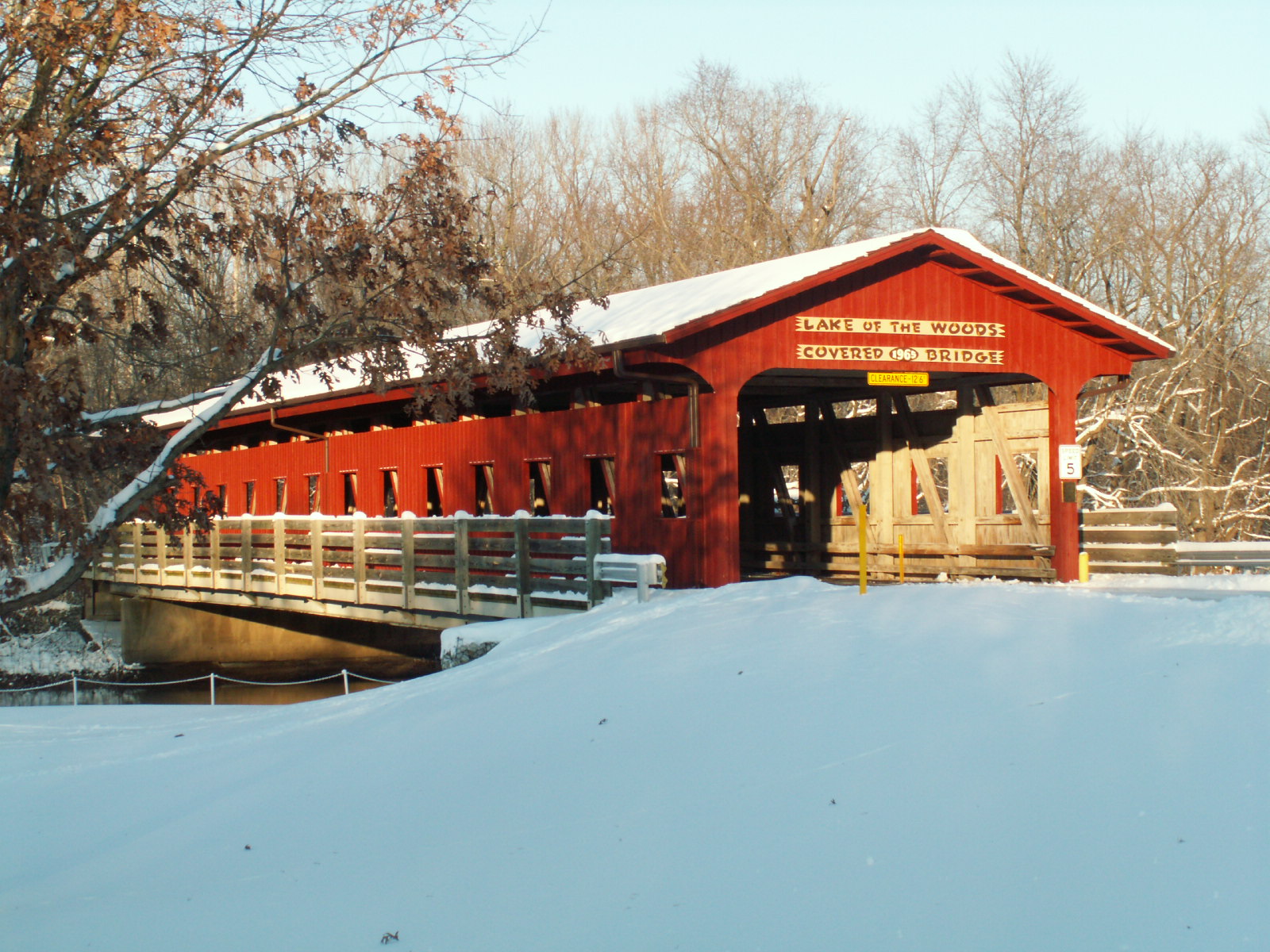 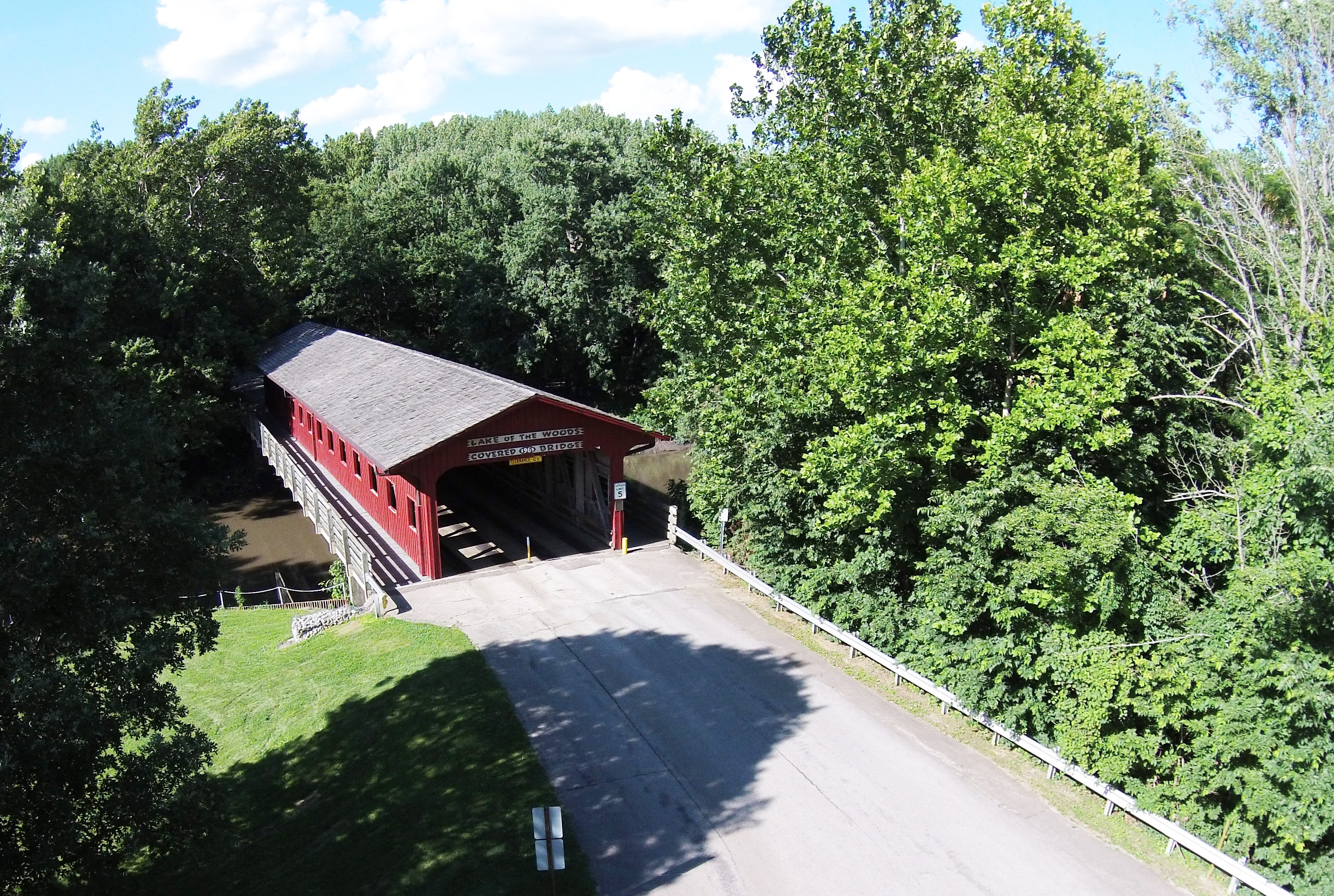 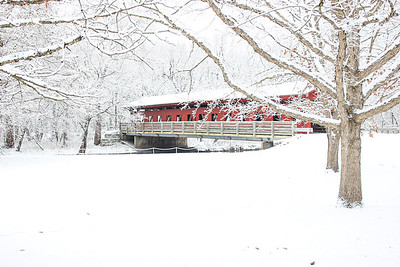 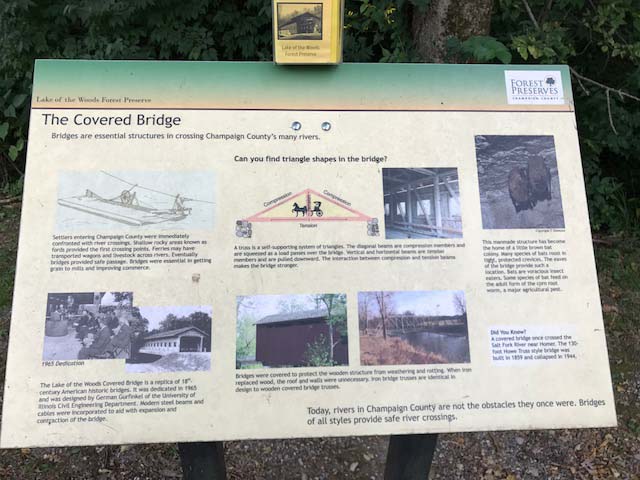 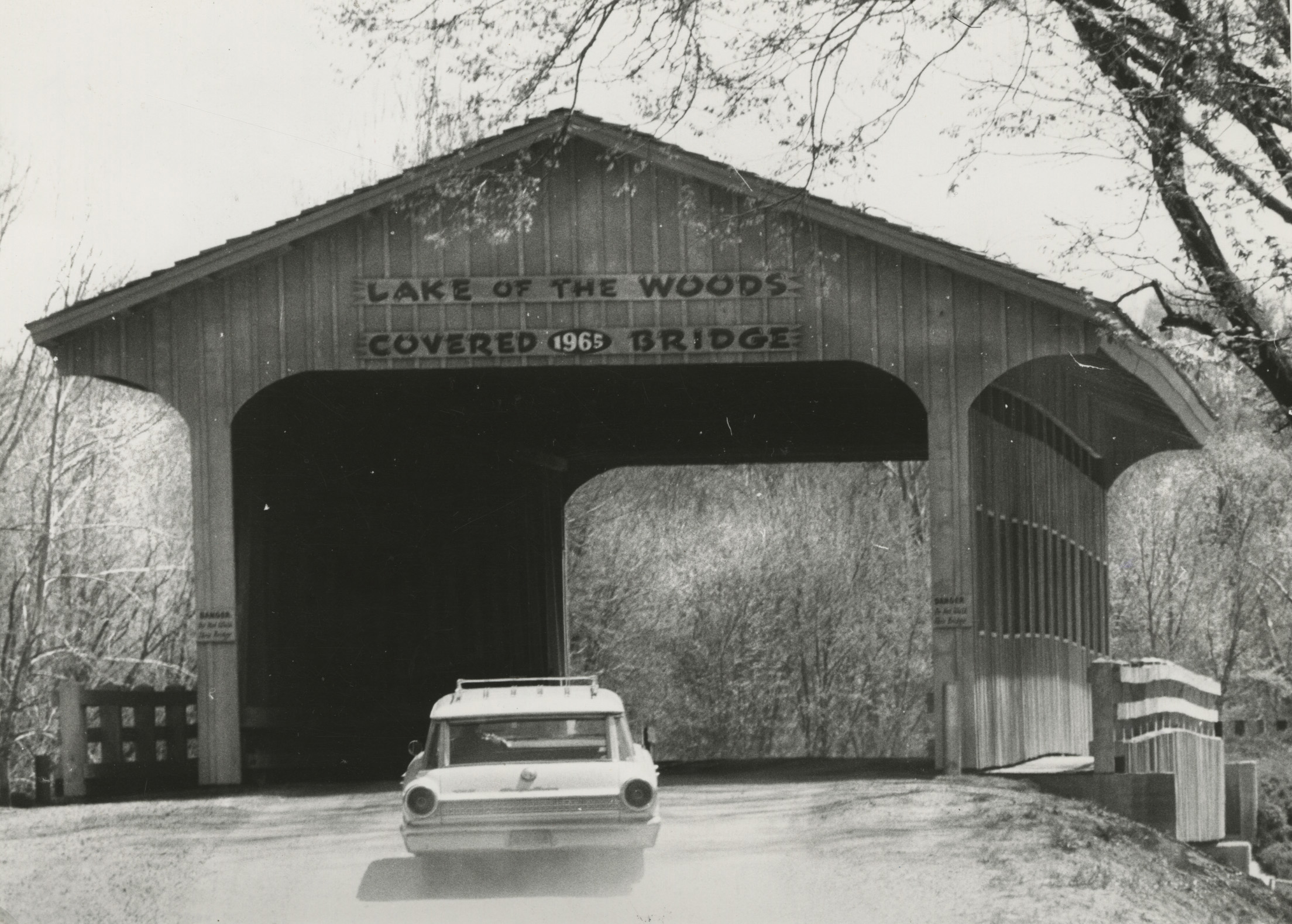 Bridges were covered to protect the wooden structure from weathering and rotting. When iron replaced wood, the roof and walls were unnecessary. Iron bridge trusses are identical in design to wooden bridge trusses. A truss is a self-supporting system of triangles. The diagonal beams are depression members and are squeezed as a load passes over the bridge. Vertical and horizontal beams are tension members and are pulled downward. The interaction between tension and pressure beams makes the bridge stronger.

This manmade bridge has become the home of a little brown bat colony. Many species of bats roots in tight, protected crevices. The eaves of the bridge provide such a location. Bats are voracious insect eaters. Some species of bat feed on the adult form of the corn rootworm, a major agricultural pest.

Did you know? A covered bridge once crossed the Salt Fork River near Homer. The 130-foot Howe Truss style bridge was built in 1859 and collapsed in 1944. Today the rivers in Champaign County are not the obstacles they once were. Bridges of all styles provide safe river crossings.

Explore the beautiful and historic Lake of the Woods Forest Preserve in Illinois' Champaign County! Originally opening in 1948 following World War II, this beautiful preserve occupies almost 900 acres along the corridor of the Sangamon River. Highlighting Lake of the Woods are several well-known attractions: the Museum of the Grand Prairie, Mabery Gelvin Botanical Garden, HI Tower, and the iconic red Lake of the Woods Covered Bridge. The preserve opens at 7 AM year-round, weather permitting with closing times varying.

With Lake of the Woods Forest Preserve opening in 1948 as the district's first property, the Champaign County Forest Preserve District is chock full of local history! Explore many cultural and historic points of interests located in or near beautiful CCFPD spaces by following along this heritage trail!