The A. G. Gaston Motel is a former motel located in Birmingham's "Civil Rights District." The motel was first opened in 1954 and acted as a headquarters for the Civil Rights Movement taking place in Birmingham. The Gaston motel was also an important business for African American travelers in the era of Jim Crow because it allowed Black visitors a modern hotel where they could stay with dignity. With the exception of rented rooms, the hotel was the only modern hotel that was open to African Americans in the entire city of Birmingham. 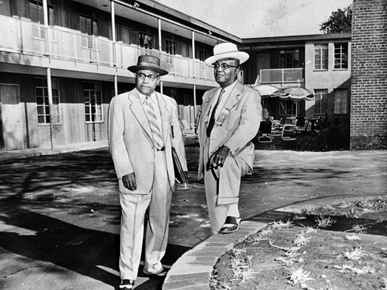 Postcard view of the motel when it first opened its doors in 1954. 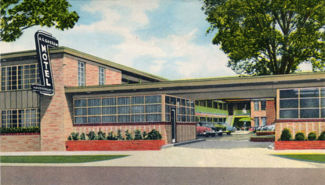 Constructed in 1954 by a businessman A. G. Gaston, this hotel offered modern amenities to African American travelers and later became an informal headquarters of civil rights groups. The motel was built with 32 guest rooms including a few master suites. Every room in the motel provided heat and air-conditioning in addition to private bathrooms, in-room telephone service, and jukeboxes. The hotel also boasted a dining room complete with a cocktail lounge. The lounge featured performances of African American entertainers including Little Richard and Stevie Wonder.

The Gaston Motel provided accommodations for many national Civil Rights leaders as they visited Birmingham. Gaston was a supporter of the movement but also found that he needed to keep some of his support private else he might experience backlash from white city leaders. Under pressure, Gaston chose to speak out against some of the direct action techniques of civil rights protesters although he still welcomed civil rights leaders to his hotel and allowed visiting members of Martin Luther King Jr.'s  Southern Christian Leadership committee to plan the Birmingham Campaign within the walls of the his motel.

Martin Luther King Jr. was staying in the Gaston Motel when he decided to submit himself for arrest as a show of solidarity with the local Birmingham protesters.Following his arrest, King composed the famous "Letter From a Birmingham Jail" that castigated reluctant white supporters who counseled African Americans to be "patient" and accept segregation in the near-term. The document outlined King's ideas on racial justice and commitment to non-violent tactics to induce a positive, palpable change. Upon King's return to the hotel, white supremacists exploded a bomb adjacent to King's room causing destruction to the front of the motel.

President Kennedy initiated Operation Oak Tree as part of his effort to restore order after white supremacists perpetrated attacks against African Americans throughout Birmingham in 1963. Bombings of the A. G. Gaston Motel and the King residence shortly after the Birmingham Truce had been signed forced Kennedy to end his vacation early and order the National Guard into a state of readiness. Prior to the wave of bombings that forced Kennedy into action, many hoped the Birmingham Truce would would be a step towards ending segregation by establishing a bi-racial committee and securing promises by civil rights groups and city leaders to work together. Outrage over these plans lead to the outbreak of violence by opponents of racial equality. President Kennedy responded to the renewed violence by preparing federal troops as part of Operation Oak Tree. The potential of having federal troops take control of the city helped white moderates regain control of the city and the bi-racial committee was reestablished.

In recent years, preservationists have prevented the demolition of the hotel and efforts are underway to restore the building as a hotel and conference center. The renovated hotel would feature an interactive display to educate visitors about its role in history. The City of Birmingham currently owns the hotel and plans to annex it to the Birmingham Civil Rights Institute.

This walking tour includes several locations that are part of the Birmingham Civil Rights National Monument, composed of several sites in downtown Birmingham that are also part of the Birmingham Civil Rights district. This national monument covers eighteen acres and includes beautiful sculptures and important buildings that were the site of planning meetings, peaceful protests, and violent attacks. Highlights of the tour include Kelly Ingram Park, the 16th St. Baptist Church, and the A.G. Gaston Motel. The tour also includes museums and organizations dedicated to preserving and sharing the history of the civil rights movement.