You are vieweing item 3 of 3 in this tour. 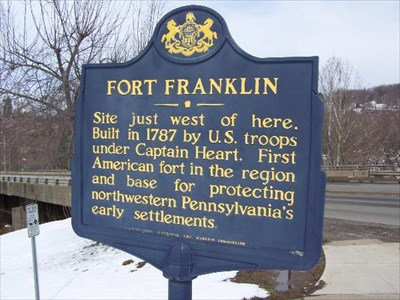 Fort Franklin was the third fort built within the modern borders of Franklin, Pennsylvania, and was completed in 1787. It sat at the mouth of the Allegheny River and French Creek - waterways that were vital to trade. With an area of one hundred feet squared, encompassed by walls sixteen feet high, complete with swiveling guns and four towers, this fort gave off an aura of strength. Like other fort before it, Fort Franklin soon had a small community outside the walls. The flat area, easy passage to the river, and nearby ford through said river made the area idea for hotels and other businesses.

While all of these factors made the area an excellent place to build a community, it was significantly less ideal for a military installation. Fort Franklin’s 990-yard removal from the mouth of the waterways it was supposed to safeguard undermined its effectiveness. Captain Johnathan Heart, who was in charge of choosing the site, claimed the reason for his decision was the “convenience of timber”.

This was an odd statement, as the British had built a successful fort (Fort Venango) years before, and the site was less than fifteen acres from the current fort. In contemporary sources it was praised for its location, commanding a much more strategic view along the river. Even a visiting officer, a Major Ebenezer Denny, questioned the reasoning behind Fort Franklin’s poor placement. He wondered why Heart would take time and resources to build an entirely new structure when the old Fort Venango, built primarily of stone, could easily be repaired and re-manned with much less trouble. Heart didn’t explain his reasoning further, and in 1787 the fort was completed, named after Benjamin Franklin, and staffed with eighty-seven men. A prolonged lack of conflict combined with questionable construction turned the fort and its men derelict.

Tension with the Native Americans in 1794 meant that a blind eye could no longer be turned towards Fort Franklin’s dilapidation. Pontiac's Rebellion was brewing and the colonists were worried. Not only was the physical structure of the fort suffering from neglect, but the number of occupying men had dropped to twenty-five – with half of that number pronounced unfit for duty. This was alarming to those in charge of the frontier defense - Fort Franklin was part of a chain of forts that formed the first line of defense against attack from the west. Fears of their line of forts being breached caused an influx of American soldiers to be sent as backup. Around 100 officers and men manned the fort until another was built nearby (Old Garrison). They then trickled out from Fort Franklin from 1795 to 1803, when the structure was completely abandoned. It never saw the combat its proponents were preparing for. The locals refused to leave with the soldiers, instead taking the fort apart for materials to shore up chimneys and walls. The town grew from there and still stands to this day, bearing the name it did all those years ago – Franklin. No sign of the Fort itself exists today besides a state marker.