Dedicated on October 27, 2010, Reconciliation Park is the first landmark in Tulsa History to memorialize the victims of the 1921 Race Riot. The park is the result of the 2001 Oklahoma Commission to Study the Tulsa Race Riot of 1921, which has been called one of the worst civic disturbances in American history. Beyond memorializing this tragedy, Reconciliation Park is dedicated to commemorating the role that African Americans have played in building Oklahoma throughout the state’s history. 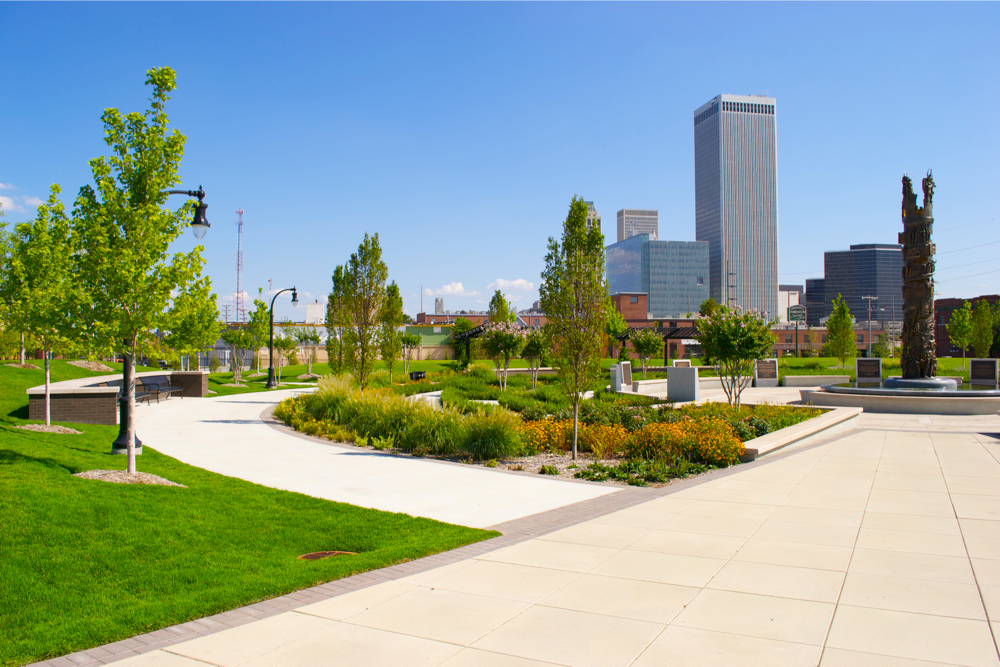 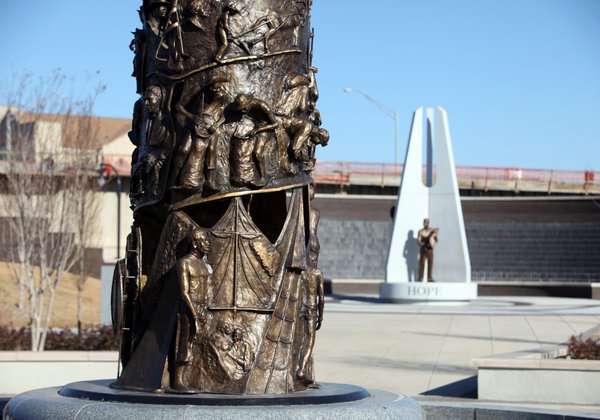 Free and open to the public, Reconciliation Park is home to several striking pieces of art depicting both the Tulsa Race Riot of 1921 and the African-American history of Oklahoma. The two most prominent pieces were created by well-known Denver artist Ed Dwight, who was the first African-American astronaut in history. Hope Plaza, located at the park’s entry, is a triptych installation consisting of a granite base and three larger-than-life bronze statues taken from actual photos of the riots and their aftermath: Hostility features a white man armed for assault, Humiliation depicts a African-American man with his hand raised in surrender, and Hope shows the white Red Cross director carrying a African-American baby. The installation is meant to convey the three overwhelming emotions Tulsans experienced in response to the riot.

The magnificent 25-foot tall Tower of Reconciliation is located at the center of the park. The tower depicts scenes from African-American history in Oklahoma: the migration of slaves who traveled the Trail of Tears alongside Native Americans, the slave labor which helped build the Territory, the victory of the 1st Kansas Colored Volunteer Infantry at the Battle of Honey Springs, the migration of free African-American people into the new state of Oklahoma and the foundation of all-African-American towns and neighborhoods, most notably Greenwood. The Tower also honors Tulsa’s early African-American leaders, including Mabel B. Little and Buck C. Franklin.

Reconciliation Park’s location is highly symbolic. On one side lies the historic African-American community of Greenwood, which the neighborhood residents rebuilt after it was destroyed in the riot. On the other side is the bustling Brady Arts District, which had originally been named for local businessman, KKK member and riot watchman W. Tate Brady, but was re-dedicated in 2014 as a memorial to Civil War photographer Matthew Brady. While the park itself commemorates the victims of the riot, its location demonstrates Tulsa’s willingness to finally acknowledge the importance of the riot to the city’s history.

On May 31, 1921, a standoff between a group of enraged white Tulsans and the members of the African-American Greenwood community erupted in gunfire. Earlier in the day, 19-year old African-American shoeshine boy Dick Roland had been arrested for allegedly sexually assaulting 17-year old white elevator operator Sarah Page. The lack of witnesses, evidence, or a statement from Page herself did not stop the arrest from being made. The situation boiled over when the white community formed a lynch mob, which events mobilized the Greenwood residents to form a protection force. Both groups met on the steps of the Tulsa courthouse where Rowland was being held, and demanded justice.

It is speculated that the gunfire started when an African-American man, who had been ordered by a white civilian to surrender his gun, scuffled for the weapon and accidentally discharged a shot. The ensuing gunfire soon spread out into the streets, with gunfights between the contingents lasting well into the night. By 1 a.m. the following morning, the white mob began setting fire to the Greenwood neighborhood. They then turned away the Tulsa Fire Department units dispatched to subdue the blaze. Eyewitness accounts recalled seeing planes dropping firebombs onto Greenwood from overhead, and records show that six WWI-ear biplanes had been dispatched from the Curtiss-Southwest Field. By sunrise the following day, over 36 city blocks—nearly the entirety of Greenwood—had been burned to the ground. The official death count released by the Tulsa World was 176, though it is believed to have been much higher, with over 800 people admitted to local hospitals due to injuries sustained in the riot.

This walking tour makes a small loop through Tulsa's historic Greenwood neighborhood with stops at several landmarks and historic sites. You'll learn about the emergence of this thriving community (home to over 100 black businesses), its devastation during the racially-motivated violence of 1921, and the struggle of its residents to rebuild.