Completed in 1753, Independence Hall is considered the birthplace of the United States. It was here that both the Declaration of Independence and the U.S. Constitution were signed establishing the foundation of the law in this country. It served as the first capitol building for the United States, but was originally built to serve as the state house for Pennsylvania. It was also a convention site hosted by President William Howard Taft which would lead to the creation of the League to Enforce Peace. It is a part of Independence National Historical Park, which also includes the Liberty Bell Center and the Benjamin Franklin Museum along with a visitor center that includes theaters, exhibits, and a gift shop.

In the Assembly Room, visitors can witness the very place where the Declaration of Independence and the U.S. Constitution were both signed 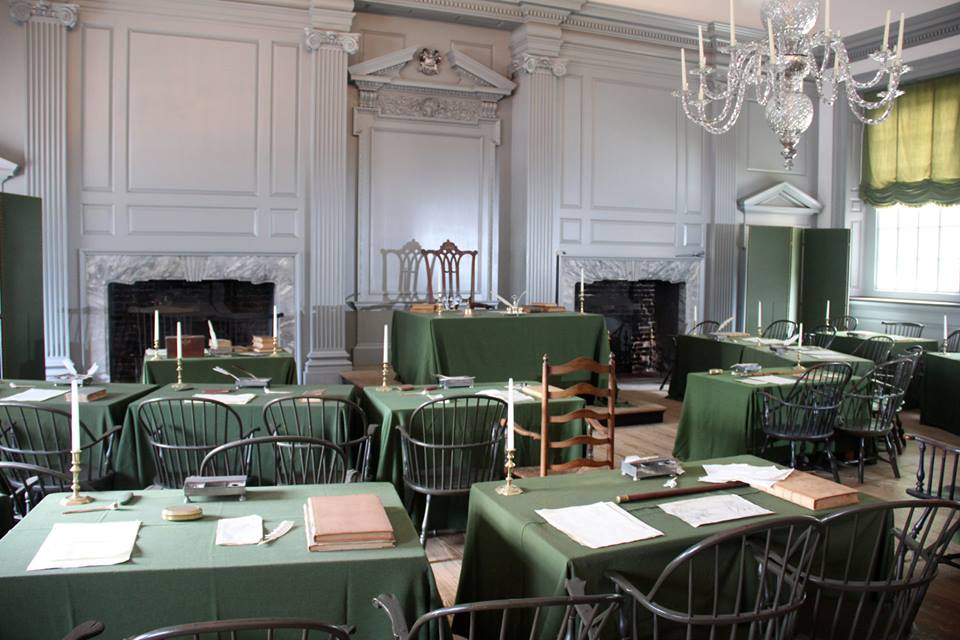 From 1790 to 1800 Philadelphia was the Capital of the United States. 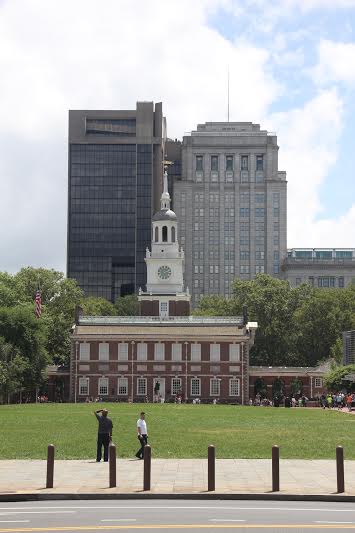 Visitors can witness the room where the Declaration of Independence and the U.S. Constitution were both signed

Independence Hall as viewed from the South entrance. Wikimedia Commons. 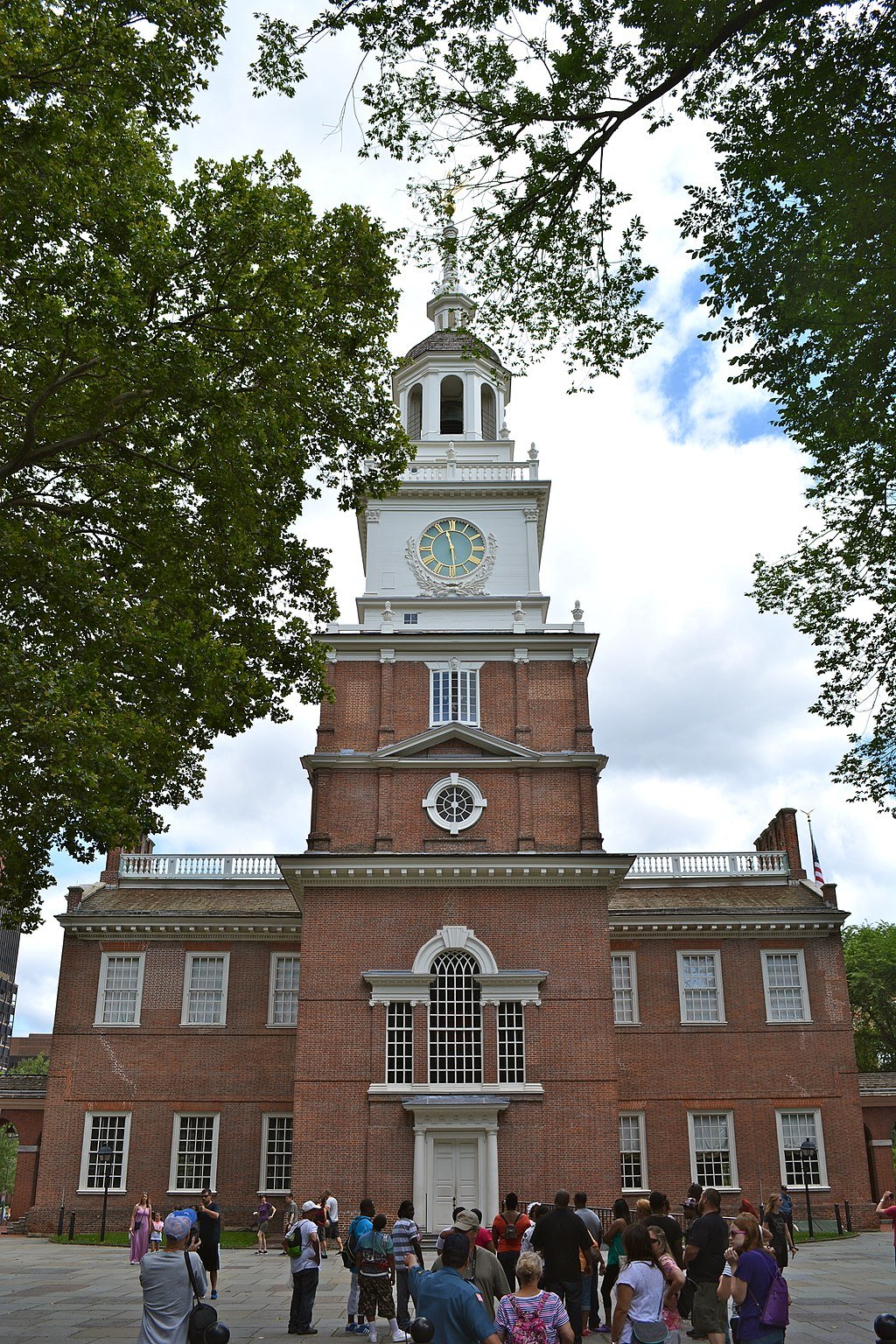 This painting, entitled The Congress Voting Independence, circa 1780s-1790s, was used as a reference for restoring the Assembly Room to its early American appearance. Courtesy of ExplorePAHistory and Atwater Kent Museum. 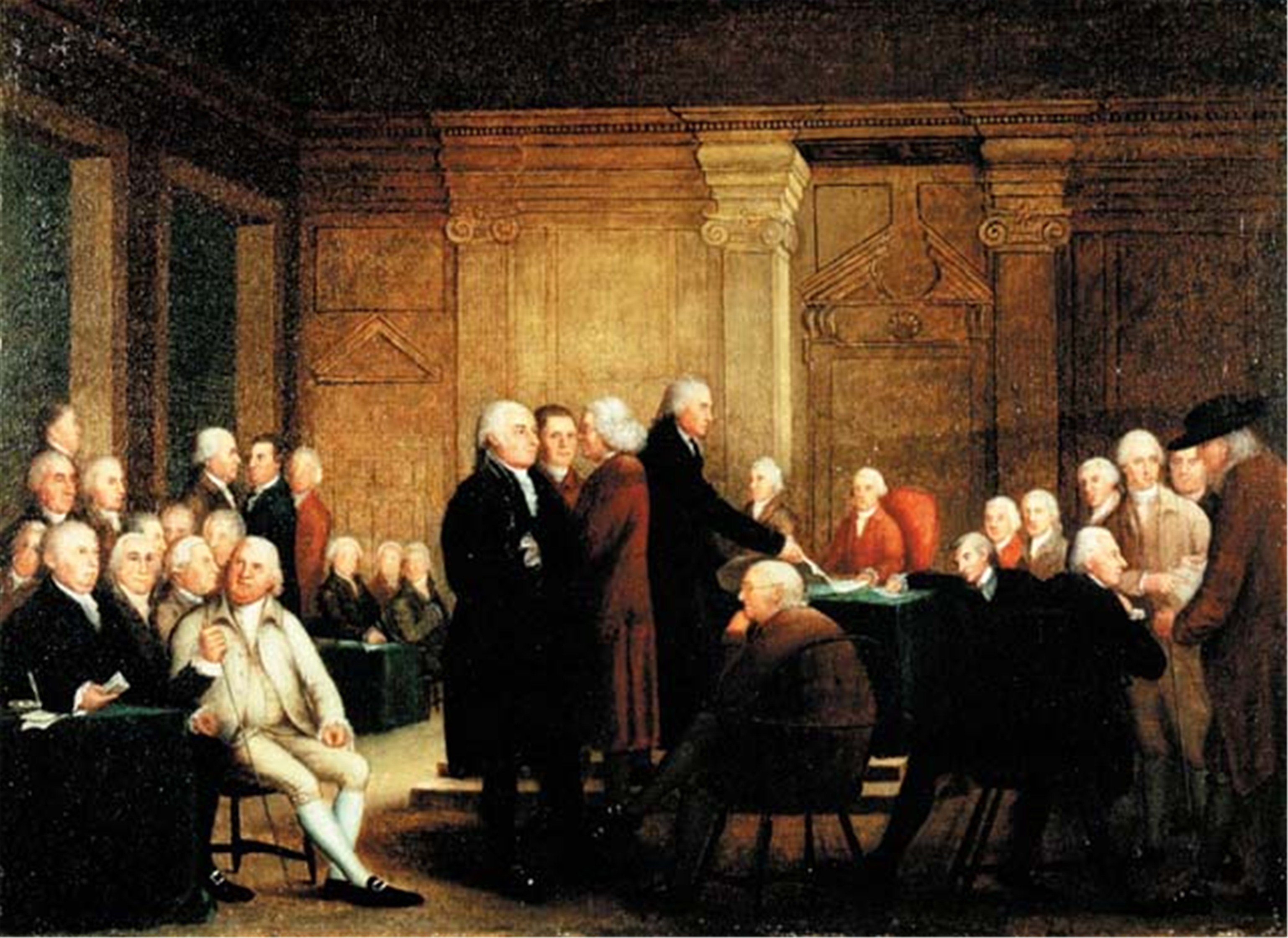 "We hold these Truths to be self-evident, that all Men are created equal..."

Construction on Independence Hall began in 1732, originally designed to be the Pennsylvania State House and house all three branches of its colonial government; the legislative, the executive, and the judicial branches. During the Second Continental Congress, which later became the Constitutional Convention of 1787, the state of Pennsylvania loaned out their assembly room for the convention to meet. It was there at Independence Hall in 1776 that George Washington was named Commander in Chief of the Continental Army. In 1781, the Articles of Confederation were adopted in Independence Hall. And in 1787, our founding fathers and statesmen from the newly independent country signed the U.S. Constitution, the same constitution that is in place today. The living document has been amended, but the ideals of the founding fathers still live on.

The Independence Hall would be the site of the funeral for President Abraham Lincoln as he was shot in the back of the head by stage actor John Wilkes Booth. This incident happened on April 14 and Lincoln succumbed to his injuries the very next morning. A train traveled with his casket onboard retracing the same route that President Lincoln took when he was first inaugurated in 1861. His funeral would then be held inside the Assembly Room at Independence Hall and over 300,000 guests attended his viewing prior to the burial. President Lincoln is now buried at Oak Grove Cemetery in his own tomb in Illinois, a state he once served as a congressman for.

President William Howard Taft also used Independence Hall in order to push for the formation of an international organization designated to keeping peace between countries. The League to Enforce Peace (later League of Nations and then the United Nations) was established in 1915 for the purpose of keeping world peace. It was created due to American citizens being concerned of the outbreak of war in Europe. However, a year prior to this organization being established, World War I broke out due to multiple factors including the assassination of Archduke Franz Ferdinand of Austria-Hungary. The organization ceased operations in 1923 after the war.

Independence Hall became apart of Independence National Historical Park, which was established by the U.S. Congress in 1948. This was an effort to preserve the history of structures dating back to the American Revolution and declaration of America’s independence. In Independence Hall, visitors can explore the building by taking a guided tour. The guided tour takes the visitors through a number of rooms that are set up in the way that they would have appeared during the Revolution. The Assembly Room, which is the most famous, is where visitors can see the exact room where both the Declaration of Independence and the U.S. Constitution were signed. Across the hall from the Assembly Room is the Courtroom of the Pennsylvania Supreme Court. The second floor of the building houses the Long Gallery, Governor's Council Chamber, and the Committee of the Assembly Chamber.

The Long Gallery originally served as a reception area for visitors waiting to see the Governor. It was also the host of parties and dinners hosted by the Governor. During British occupation, the Long Gallery was used as a hospital to care for wounded American prisoners of war. The Governor's Council Chamber was where Pennsylvania's Supreme Executive Council met during the 1700s. The Committee of the Assembly Chamber was used as a room for meetings and military storage during the 1700s and was the office of the U.S. Marshal during the 1800s.