First built in 1892 as the first coeducational public school in Morristown, the Rose center has become the town's community and cultural center. Named after the Chairman of the School board Judge James G. Rose, the building combined Morristown's elementary school and high school until 1916 when the high school was relocated to a separate facility. Following the separation of it's high school the Rose Center continued to function as an elementary school until 1975 when the school finally closed down. After the Rose center was closed down it was converted into a museum and as a community initiative related to the US Bicentennial.

A photo of the Rose Center taken present-day. 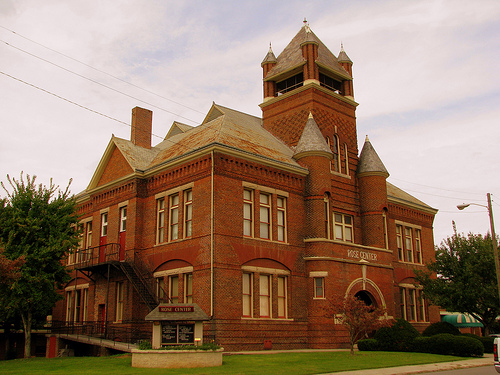 A photograph of the Rose Center taken during the winter in a Black and white format. 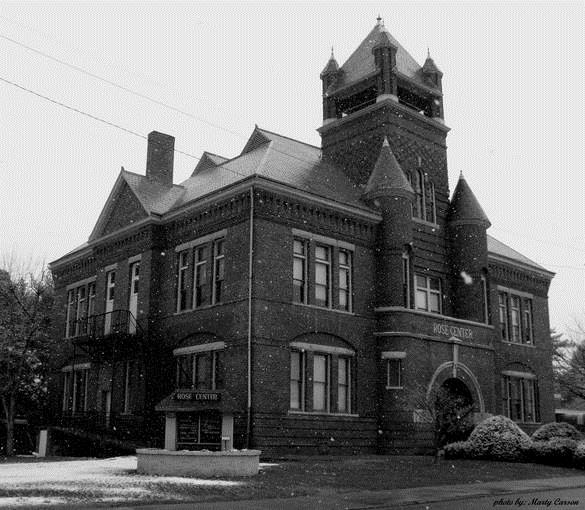 A photo of the students who attended the Rose Center when it still functioned primarily as an elementary school. 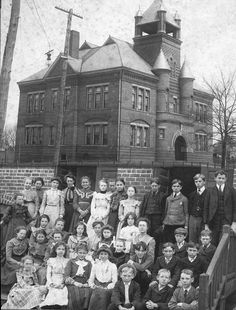 An interior photograph of the Rose Center, taken present-day. 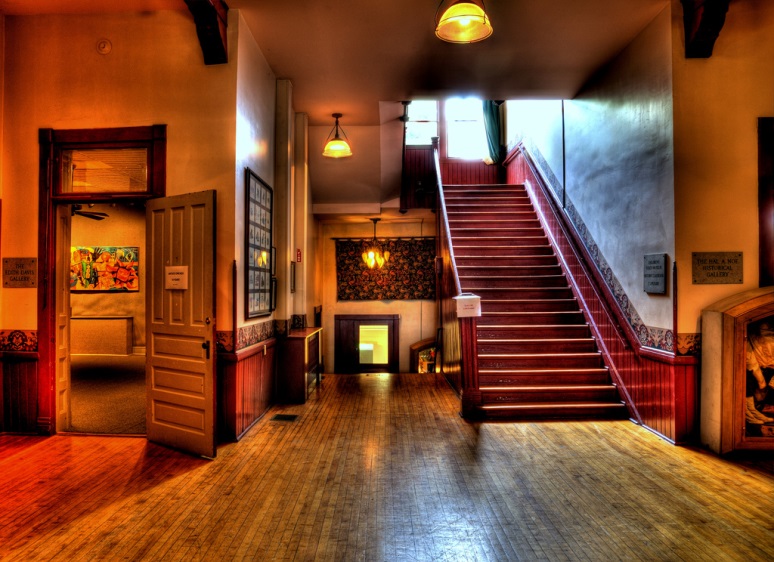 Many schools have played an integral part in American history, whether it be just because of the services provided to students or because of its significance as a cultural icon. The Rose Center of Morristown, Tennessee is no exception to that rule, as it was both the first coeducational school and the epicenter of Morristown. Originally, the school was comprised of only an elementary school but the school board felt that it would benefit the community if the combined their elementary program with the High School level facility. It was then decided in 1916 that the board should combine the elementary school with the high school from another building until the end of that year. While the center discontinued being a public school in the 1970s, it continues to remain as the cultural center for the city as well as a reminder of how far Morristown has come and how the city was able to come together through this building.

While the Rose Center is an important focus to the town, Morristown has an intricate history that set the stage for how the Rose Center became an important figure in its history. Much like Greenville, Morristown is one of the oldest towns in Tennessee designed as the seat of Hamblen County. The county of Hamblen came into existence when it was first settled by two men Robert McFarland and Alexander Outlaw in 1783 around an area called the “Blend of Chucky” Following McFarland’s and outlaw’s settlement along the bend more settlers began to settle in the vicinity that is now Morristown. In the year 1792-1793 a road was laid out through the area which extended to the western limits of Jefferson County and in doing so formed a line between the countries of both Jefferson and Grainger where most of the earlier settlers of the region settled. In addition to Hamblen County, Morristown also occupies segments of Grainger County in its geography. Initially a small town founded in 1798, the town soon grew in response to the growing agriculture of tobacco and businesses such as saddle, makers, tailors, lawyers, Grist Mill, tailors, lawyer and dry goods that helped supply necessities for isolated agricultural communities. Following up with Grainger County, Morristown also occupies a piece of nearby Jefferson County. First made into the county seat in 1763, the community that would eventually become Morristown was a settlement called Dandridge which was established in 1783.It was in April of 1855 that Morristown became established as a town as a result of the intersecting travel routes called “The Big Road” which went from Baltimore to Knoxville as well as “Buffalo Trail” which came through a north-south direction from the Cumberland Gap.

In the ten years following the creation of Morristown, the city began to grown at a rapid pace. However, despite the growth which followed, the town’s administration was split between two local counties Jefferson and Grainger. As a result of this confusion, citizens in each county demanded a more localized government which led to the creation of Hamblen County on May 31st, 1870. The plans for the County were laid out at an organizational meeting near Pantler Spring, it was during this meeting that representatives from the neighboring counties of Grainger, Hawkins and Jefferson made plans for a special election in which voters from each of the three counties had to approve the measure for their section to be included in forming Hamblen as a county. While the voters from Jefferson and Grainger gave an approval to Hamblen’s creation but later changed their minds in the next election and approved of the establishment of Hamblen County. The County received its’ name in honor of lawyer and farmer Hezekiah Hamblen who ironically came from the neighboring Hawkins county. In terms of the seat for Hamblen County, there were several towns competing for the position which included Russellville, Panther Springs, Morristown and Springvale.  While it was believed that Russellville would be chosen since it was designated as the most important of the four, the position instead fell to Morristown because of its’ location.

Following the end of the Civil War, Morristown had grown steadily in population and wealth. This was attributed due to the rise in the number of business firms which had appeared. This would include names such as GB McCray & Co., Henry Sanders and W.W. Williams’s Groceries, GE Spence hardware, J.S. Davis drugs and many other companies from different business ventures.  As a result of this growing wealth which emerged from these firms, two banks soon emerged from these firms; two banks within Morristown were soon established. First in 1974 with the Lookout Bank with a capital stock of $50,000 and later with the First National Bank of Morristown also with a capital stock of $50,000 in 1885. Over the course of time which followed, Morristown began to incorporate several other attractions that helped bring in a more unified community; one of these was the Rose Center. First built in 1892, the building was named after Civil War hero and Chairman of the School board Judge James G. Rose. Originally operating as both an elementary and high school, by 1916 the high school division separated and the center was left as an elementary school. Throughout a majority of the 20th Century the Rose Center continued to remain as merely an elementary school, however by 1975, the school had closed down after 59 years of service.

Despite the building being closed down after its years of service, the building itself was not completely out of use. This can be said because following the end of its’ use as a school, the Rose Center still held a great deal of importance in the community of Morristown and was therefore converted into a museum. In order to accomplish this transaction, a group of local citizens got together and began to raise funds to renovate the building including replacing the roof and reopening the center as a museum. This task was accomplished by the following year of 1976, as both a museum and cultural center for the people of Morristown in celebration of America’s bicentennial. Today, the Rose Center or “the Castle” as it is referred to by the residents of Morristown, continues to serve the community of Morristown as a museum and community center that offers a variety of classes for both children and adults as well as festivals to celebrate the culture of Morristown such as the “Mountain Makins” and the “From Africa to Appalachia” festivals. Overall, the Rose Center remains an important part of Morristown in which it continues to both teach and offer services to its community to help remind where they had come from, as well as who they became as they changed with time.