Bethel Cemetery is the final resting place of more 1,600 Confederate soldiers. Most of the men who are interred at this cemetery were from Tennessee, although the cemetery includes about one hundred men from who were killed in the battle of Fort Sanders. In addition, the cemetery includes the graves of around 50 Union troops who died after being taken prisoner by Confederate troops.

The cemetery is adjacent to the Calvary Catholic on the West and Knox County’s Pauper (Belleview) Cemetery to the East. 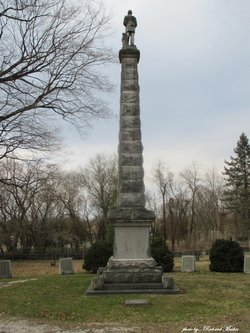 Bethel Cemetery was cared for and maintained by the Winstead family from 1886-1989. The last family descendent and caretaker, Mamie Winstead, left the cemetery to the Hazen Historical Museum Foundation when she passed in 1989. The Marby-Hazen House Museum care for the cemetery and offer historical tours.

Similar to many Confederate monuments, the center monument was created well after the war ended. The Knoxville Ladies Memorial Association unveiled this statue on May 19, 1892, and demonstrates the way these memorial organizations changed from burying the dead to attempting to reshape the historical memory of the Confederacy.