During the nineteenth and early twentieth centuries, pottery manufacturing was a major industry in West Virginia. In Huntington, the corner of Sixteenth Street (now Hal Greer Boulevard) and Tenth Avenue was home to a china factory from 1904 to the mid-1930s. The facility was opened as The Huntington China Company by potters W.J. Harvey and George Fowler, but the men soon encountered financial difficulties and were forced to sell their factory in 1907. The building was then purchased by Harry R. Wyllie, who renamed the plant after himself. For the next thirty years, the H.R. Wyllie China Company manufactured semi-porcelain tableware for the home as well as thick porcelain for hotel use. After Wyllie passed away in 1931, his widow continued to operate the plant for a few years before it was closed and demolished to make way for the Northcott Court public housing complex in 1940. Today, although the factory has been closed for decades, Wyllie porcelain can still be found in antique shops and online.

Postcard of the Huntington China Company 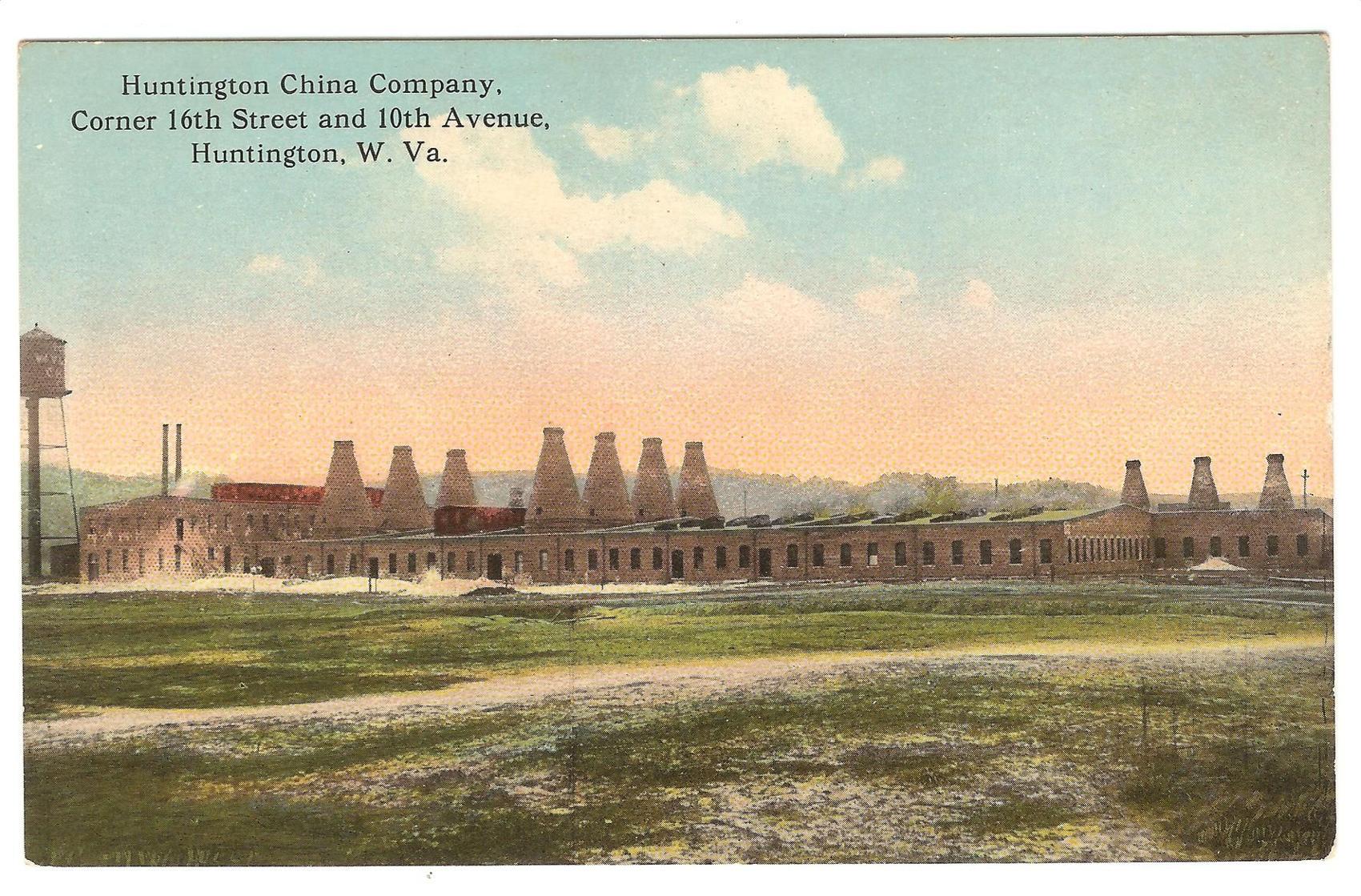 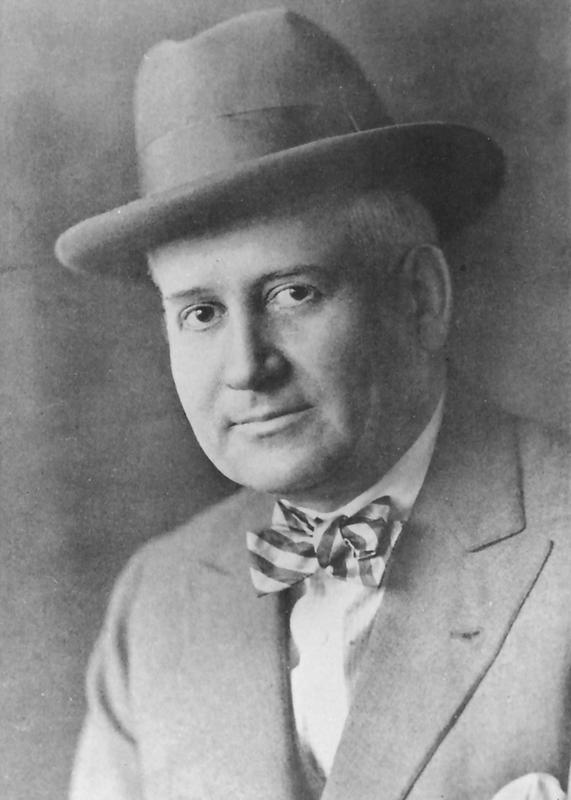 Illustration of the china factory 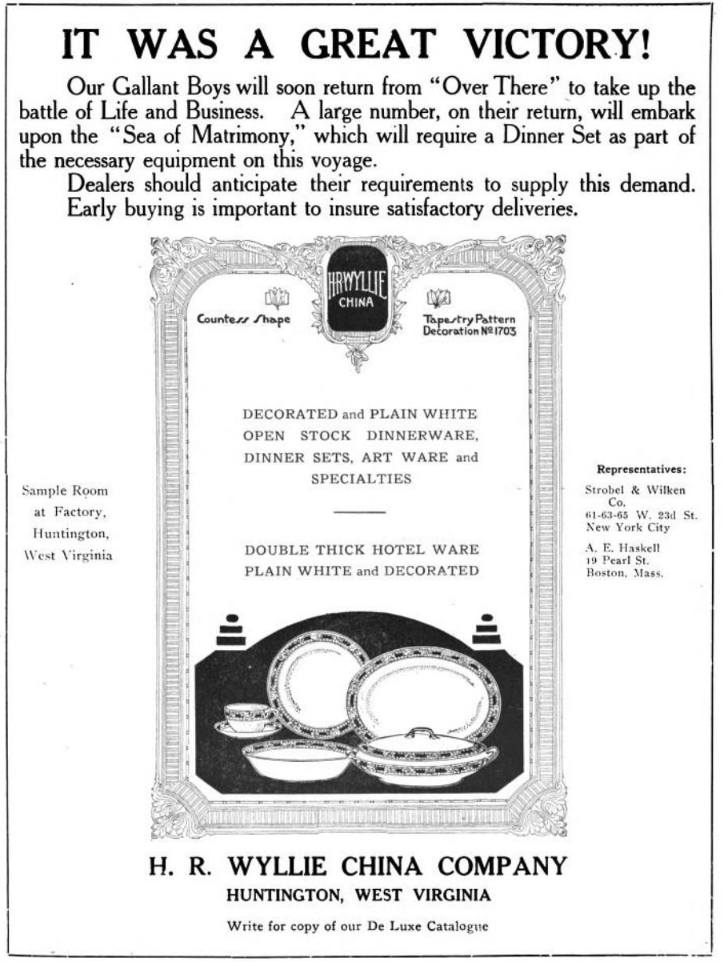 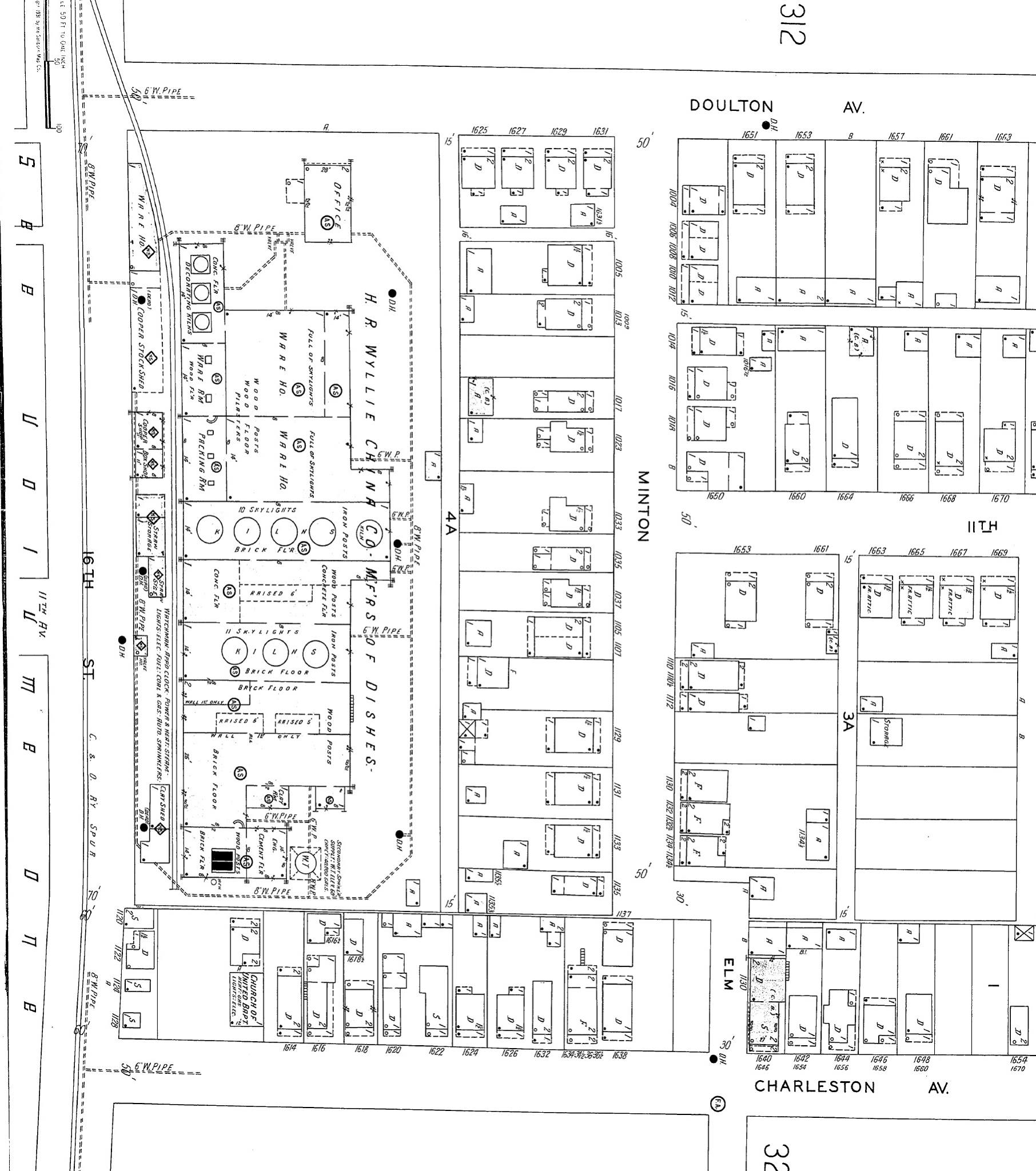 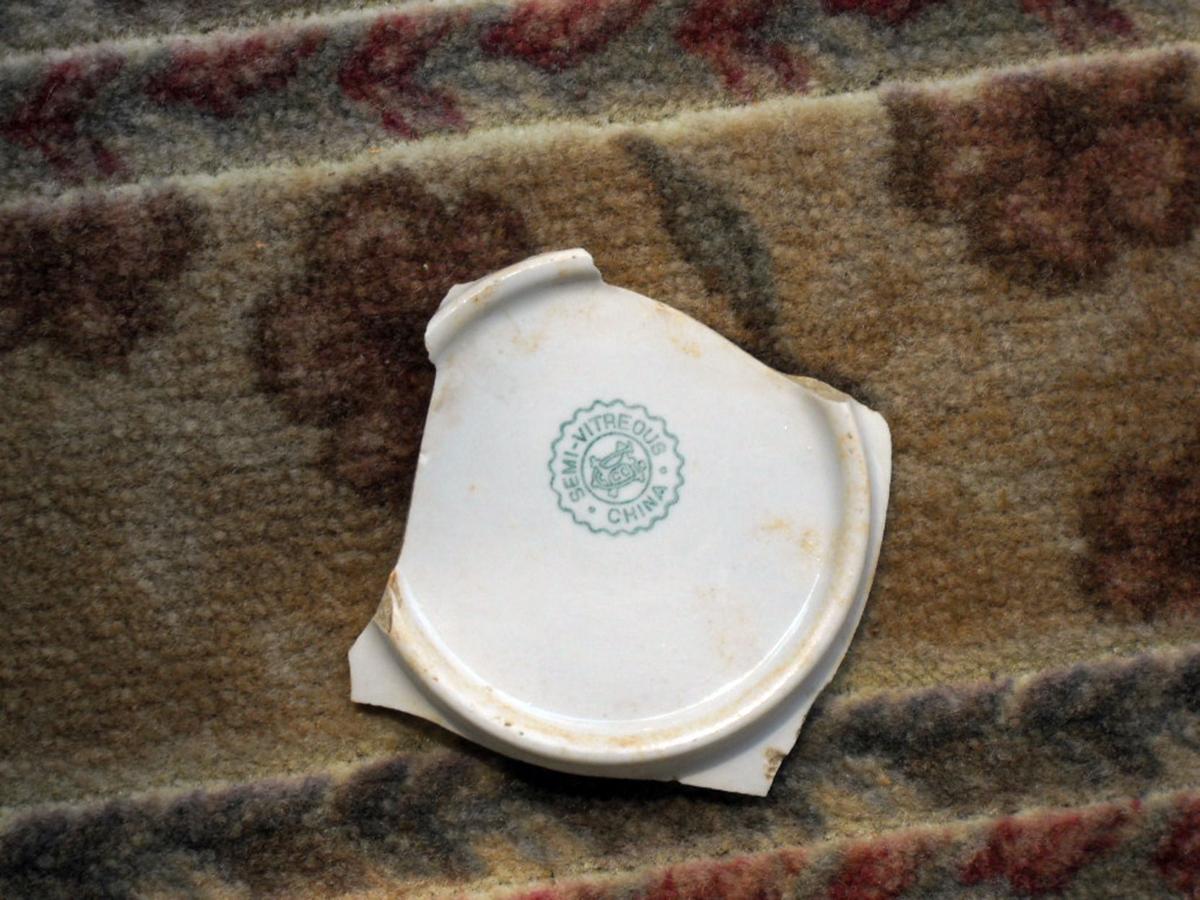 A Wyllie China Co. plate from circa 1910 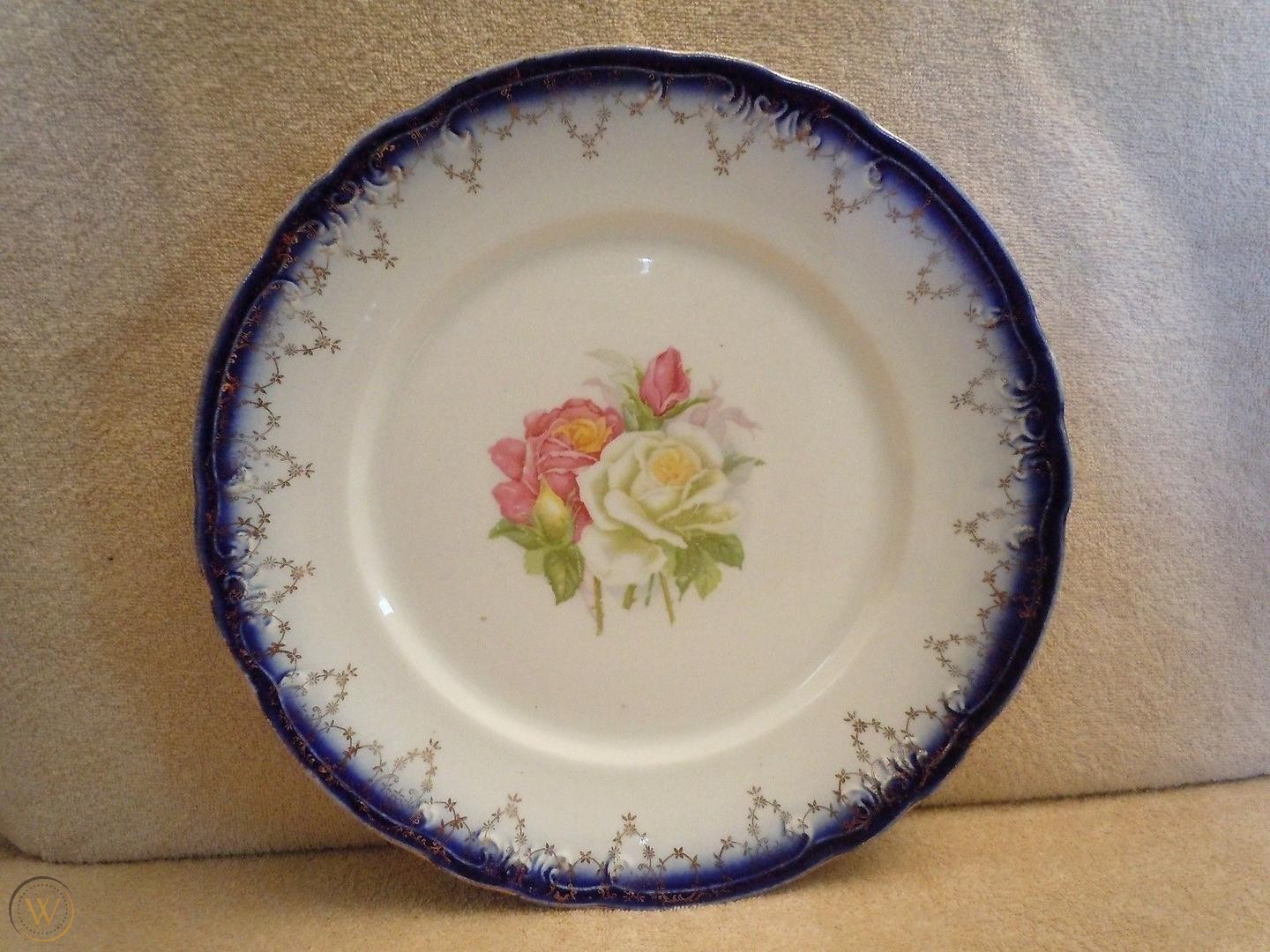 While West Virginia is perhaps better known for its historic glass industry, the state was also home to a major pottery industry during the nineteenth and early twentieth centuries. Pottery manufacture in West Virginia dates to the earliest white settlers in the region, as it was difficult and expensive to transport ceramics over the mountains from established markets on the east coast. Early manufacturers made utilitarian ceramics like lead-glazed red earthenware and saltglazed stoneware using clay from the Ohio River. Later, companies like the Ohio Valley China Company and the Wheeling Pottery Company began to manufacture porcelain, the most sophisticated earthenware. By the turn of the twentieth century, large-scale pottery manufacturers were well established across the state.

In 1904, businessmen W.J. Harvey and George Fowler decided to build a pottery plant in Huntington. Like the area’s glass manufacturers, Harvey and Fowler were lured to the city by its inexpensive land, cheap natural gas, and easy access to river and railroad shipping networks. The men purchased a large section of land on the east side of Sixteenth Street between Doulton and Charleston Avenues and built the Huntington China Company, which was in operation by July of 1905. Harvey and Fowler then subdivided their remaining land into residential building lots, which they named the “Ceramic Subdivision.” By selling the land, the partners envisioned that the money would finance the factory’s construction and provide them with a nearby work force. Just a few years after the plant was built, however, Harvey and Fowler encountered financial difficulties and the Huntington China Company failed to prosper. In 1907, the men were forced to the sell their factory to satisfy the company's creditors.

The former Huntington China factory quickly found a new owner by the name of Harry R. Wyllie, who renamed it the H.R. Wyllie China Company. Although Wyllie was a longtime dinnerware salesman at the time, he was familiar with pottery production from a young age. Wyllie was born in East Liverpool, Ohio, where he had worked in his father's pottery business as a boy. Once dubbed the “Pottery Capital of the World” and “America's Crockery Capital,” East Liverpool once contained two hundred pottery companies that produced over half of America’s ceramics between 1840 and 1930. John Wyllie and Son, which was active between 1875 and 1893, was one of these companies.

Wyllie was motivated to purchase the pottery facility by the same incentives that had attracted Harvey and Fowler, including a tax abatement and free natural gas. Unlike the factory’s previous owners, however, Wyllie quickly made the plant into a successful operation that employed over three hundred workers. Five years after Wyllie purchased the factory, new production kilns were added to meet the rising demand for the company’s wares. H.R. Wyllie China Company manufactured porcelain dinnerware for the home, as well as thick semi-porcelain china for hotel use. Many pieces were decorated with a blue border and a white background, although the company also sold several other patterns as well as undecorated china. As his company flourished, Wyllie and his family prospered, and in 1926 he purchased the Allegheny Lodge in Pocahontas and grounds for use as a private estate, which he renamed Wyllie Manor. He also emerged as a civic leader who took an active role in the effort to expand West Virginia’s road system during the 1920s.

Wyllie passed away in 1931, leaving his widow to operate the china company. Under her leadership, the factory remained in business through the mid-1930s before it was finally closed and demolished. In 1940, a New Deal public housing complex called Northcott Court was built at the location of the former china factory, where it remained for the next seventy years. Although the factory was demolished long ago, traces of its products can still be found in the area. In 2012, for instance, a road-widening project along Hal Greer Boulevard unearthed white potsherds from the old Wyllie China Company. China collectors can also find intact Wyllie porcelain pieces in local antique shops as well as online.