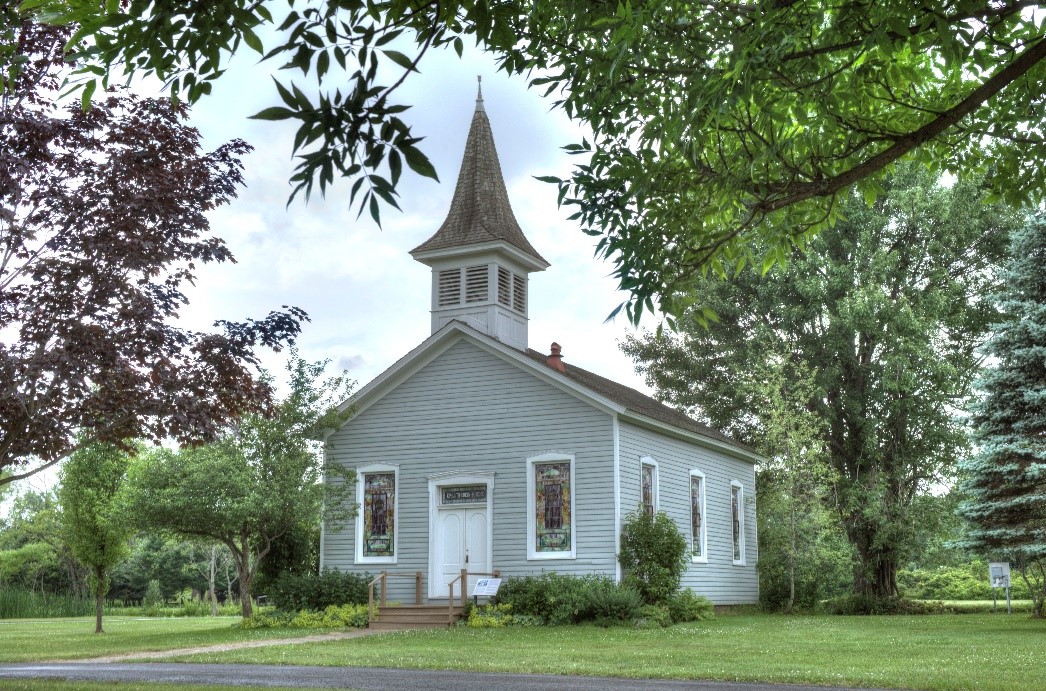 The Trinity Evangelical Lutheran Church was founded in 1854 by German immigrants, many from Alsace-Lorraine. All services were in German from its founding until the early 20th century when speaking German during WWI was questioned.

The Trinity Evangelical Lutheran Church is a simple country church that served as a place of worship for many German speaking residents of East Amherst. The steeple contains a church bell (not original) that could be heard for miles. It was rung to announce the start of church services and for emergencies. Before the advent of telephones, it would’ve been the only way for people to communicate. (ex. If there was a fire in the community, they could ring the bell to gather the people for help putting it out, or if a doctor was needed quickly.) Before entering the church, you will notice the stained glass insert over front door reading

Upon entering the church one can not help but notice the beautiful stained-glass windows in the front, sides and

back of church. The stained-glass windows were a way of visually presenting the teachings of the church, made use sunlight to enhance the colors of the window, a means of decoration and a way to brighten the interior of the church. The windows were designed by Leo P. Frohe (Born in Holland 1851) of the Frohe Art Glass Co. Frohe Art Glass Co. installed Munich (Germanic influence) pictorial style stained glass windows to honor this German community. Many volunteers helped raise funds for the project through bake sales, festivals, etc. for 10 years, it is said, in order to purchase the windows. The windows are all original except for the window that was over the altar entitled “The Light of the World”. It was removed when the Trinity Evangelical Lutheran Church was moved to BNHV and is now displayed in the congregation’s new church at 8760 Transit Road near the corner of Hunt Club Circle.

For many who lived in the 1800s, the church was the center of their community. Not only was it a place of worship, but school productions and Christmas pageants were offered there. Court cases were heard by visiting judges and local election voting took place there. Concerts, touring musicians, singers and sewing circles also made use of this space.