The Battle of Poison Spring was a decisive victory for Confederate troops during the Civil War. The battle is bet-known today for the massacre of Black troops by Confederates. White Southerners murdered members of the First Colored Kansas after they surrendered. The First Kansas was a regiment of African American volunteers that became the first Black unit to engage Confederate forces in 1862. "Remember Poison Springs" became the battle cry for many Black troops during the Civil War. The outcome was the enlistment of many African American men into the Union army. 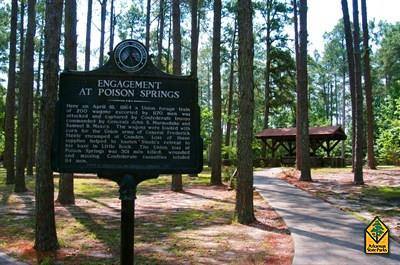 An attempt to capture Texas resulted in the Red River campaign in 1864. This campaign would go through Arkansas and head south. Union Generals wanted to decimate the Confederate forces in Arkansas. Leaving from Little Rock, Arkansas, Union forces began to move into Camden, Arkansas. A concentration of Confederate forces in Camden led to the choice to meet these troops near the city. The march was slow and cost many supplies for the Union Army. Upon arrival, Union forces found out that Confederate troops moved out of Camden.

With low supplies for Union forces, leading General Frederick Steele sent out a small caravan of wagons and units, including the first Kansas Colored Unit, to protect it to receive much needed supplies. A Confederate scout saw the caravan and recommended an ambush. The caravan which included around 1,100 men forged what they could and began to return to the Union forces positioned in Camden. Confederate Brigadier General John Sappington Marmaduke set up an ambush of around 3.600 Confederate troops. This ambush decimated Union troops. Retreating troops were followed for almost a mile and a half.

The First Kansas Colored Unit fought off two attacks before a third attack broke the line. Many Black troops that were injured or surrendered during the battle were murdered instead of taking prisoner. Union loses totaled 300 men including 117 of those belonging to the first Kansas Colored . Less than 150 casualties were suffered by the Confederates. The slaughter of the first Colored Kansas Unit became a battle cry for colored soldiers during the Civil War. “Remember Poison Springs” became the battle cry of many African American troops throughout the war.