Back view of memorial

View of the fountain from side and front 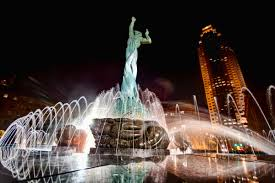 The Fountain of Eternal Life was originally created in 1964 with the goal of being dedicated to soldiers who had died or were declared missing in the Spanish/American War, WWI, WWII, the Korean War, and the Vietnam War. The Fountain was created by Marshall Fredrick, who constructed a man reaching on the top that, "...expresses the main theme of the Memorial Fountain, namely, the spirit of mankind rising out of the encircling flames of war, pestilence, and the destructive elements of life, reaching and ascending to a new understanding of life. Man rising above death, reaching upward to his God and toward Peace."

With its dedication in 1964, the Eternal Life Fountain contained only the 4,155 names of Clevelanders who had served during World War II and the Korean War. In 2004, the fountain was rededicated, and 1,361 names were added to include veterans of the Spanish/American War and World War I and the first six casualties of the Iraqi and Afghanistan War from the Cleveland Area. Further names are expected to be added in the future by the Greater Cleveland Veteran's Memorial Inc. The plaza in which the Fountain is located has also changed its name from Mall A to the Veterans Memorial Plaza.