The Green Bay YMCA dates back to 1897, and this historic building opened in 1924. The building has functioned as a social center since it opened, first as a Christian-tied organization that sought to provide men with moral lessons and promote physical fitness and then as a non-faith-based center that served all types of genders and beliefs. The YMCA has always offered its members and guests access to such amenities as indoor gymnasiums, swimming pools, and classes. The building is also an exemplary Tudor Revival structure that now survives as one of the city's most noticeable landmarks.

Green Bay YMCA. The 2020 photo shows the newest addition to the building: the large, glass atrium. 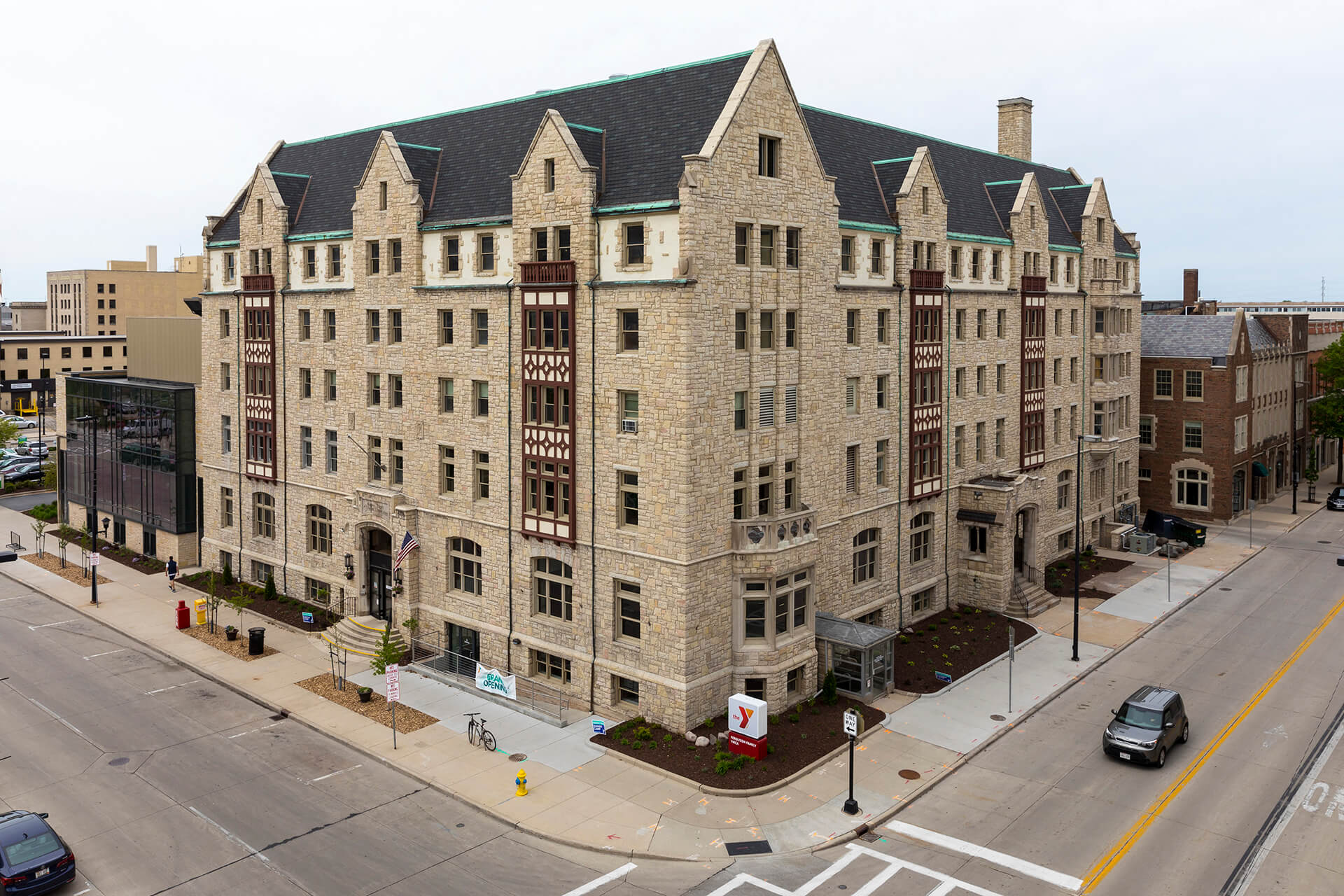 The Green Bay YMCA (Young Men's Christian Association), an excellent example of the Tudor Revival style, opened in 1924 and served as a social-services center and short-term residential building for Green Bay for several decades during the mid-twentieth century. The YMCA emerged during the latter part of America's Progressive Era when reform and settlement houses appeared with great regularity. The YMCA enjoyed strong ties to churches, which heavily influenced how they educated and influenced their guests. As cultures evolved during the twentieth century, so did the mission of the YMCA. In the late 1960s, the YMCA transitioned mainly to a recreational and athletic center.

During the late nineteenth century, the number of immigrants flowing into the U.S. swelled. Many of them endured harsh working conditions and lived in crowded, often unsanitary portions of American cities. Settlement houses and YMCAs served immigrants and the working class, providing them social services, usually rooted in Christian teachings and values tied to Victorian or "Americanized" principals. Green Bay's already expanding shipping, meat-packing, and other labor-intensive industries drew job-seeking immigrants during the mid-nineteenth century. The influx of immigrants boosted Green Bay's population enough to gain its formal incorporation as a city in 1854; Green Bay supported a population of 2,275 by 1860. Railways arrived to Green Bay by the Civil War, and the city also annexed Fort Howard (located on the opposite side of the Fox River) in 1895. By the end of the nineteenth century, 9,000 people called Green Bay their home, including many immigrants. The Green Bay YMCA sought to provide services and education to those immigrants and American-native workers.

Though the Green Bay YMCA building opened its doors during the 1920s, the parent organization dates back to 1844 as a response to the effects of the Industrial Revolution on the lives of the poor and working-class in England. The organization quickly made its way across the Atlantic so that more than 14,000 members joined North American YMCA organizations by 1854. From the 1860s to the 1890s, numerous YMCA groups formed and disbanded throughout Wisconsin. In 1887, the first YMCA appeared in Green Bay, and the club subsequently built its first building in 1890.

In 1908, a fire coupled with rapid membership expansion pushed the Green Bay YMCA to seek funds for a larger structure, though it took some time. A group of business leaders purchased land in 1919 and spent the next few years raising money. Finally, in 1923, the group raised enough funds to pursue a new structure. In part, funds were raised because the YMCA published material that showed Green Bay to have more than 4,000 "badly-behaved" boys that needed correcting and guidance. The YMCA promised to provide meals and lodging to young men in need. As well, the organization pledged to build a gymnasium and indoor swimming pool to improve the health and welfare of its citizens. By the 1920s, Wisconsin boasted of nearly 40 YMCA organizations, ranging from student-run chapters to those managed by railroad companies. Each one enjoyed a physical fitness component. Green Bay's population and industrial growth led to its YMCA membership expanding to more than 2,200 members by 1925.

Nationwide, the YMCA grew from 1,323,076 members in 1940 to 2,885,766 members in 1962. Still, by the 1960s, the YMCA had slowly moved away from its strong emphasis on Christianity and instead focused on practical methods to facilitate social services and promote health and wellness to local communities. During the 1950s and 1960s, in Green Bay, the YMCA building also housed other social organizations such as the Knights of Pythias, the Rotary Club, and the Adult Education Council. Renovation projects during the 1960s and 1970s resulted in expanded dining facilities, new gyms, teenager centers, pre-schools, and laundry facilities. Slowly but surely, YMCA moved away from serving as a short-term residential center. Indeed, by 1988, all the dormitories had been removed.

The YMCA now operates several branches in Green Bay, with the Ferguson Family YMCA occupying the historic building (as of 2020). Its mission speaks to both its nineteenth-century foundations, as well as the changes that have occurred since then: "Much more than just a fitness center, the YMCA focuses on youth development, healthy living, and social responsibility...the YMCA is here to help you get mentally, spiritually and physically fit by providing support and encouragement while also emphasizing our core values of caring, honesty, respect, and responsibility." Though Christian beliefs are not professed openly -- one can learn spirituality through Yoga and other mindful exercises -- the desire for the YMCA to teach good morals and social responsibility, along with physical fitness, remains a chief goal of the YMCA. As well, the YMCA is no longer gender-specific.