Memorial Stadium, home for decades to the Baltimore Colts and Baltimore Orioles, was a multi-use stadium finished in 1954 as an expansion of an earlier stadium first built in 1922. The site, in the Waverly neighborhood of northeastern Baltimore, was chosen by planners because it was north of the city's rowhouse neighborhoods. The original stadium, sometimes called Babe Ruth Park to commemorate one of Baltimore's favorite sons, was expanded in the 1950s following a burst of success by the then-minor league Orioles, and the inauguration of professional football in the city. The Orioles relocated to a new downtown stadium in 1992; the Colts had moved to Indianapolis years earlier. When professional football returned to Baltimore in 1996, it was with the understanding that a new football stadium would also be built downtown. Although the new Ravens (formerly the Cleveland Browns) used Memorial Stadium as their home field for two years, the structure was largely vacant after the Orioles left in 1992, and in 2001 it was demolished.

Memorial Stadium was home to the Baltimore Colts

An aerial view of the stadium, which was demolished in 2001. 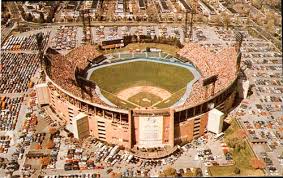 Memorial Stadium was given its name in honor of locals that lost their lives during WWI and WWII. Reconstruction of the stadium began in 1949 to help increase capacity due to the success and popularity of the Baltimore Orioles. The newly renovated stadium was completed in 1950 at a cost of $6.5 million.

The stadium actually underwent several renovations and expansions over the years, and by 1961 there were 49,000 seats. By 1964 the capacity for baseball was 54,000 and 56,000 for football when they added two sections to the upper deck.

It was also the fourth ball park Ernie Harwell called home from the season it was opened until 1959. The Orioles were the last team he covered before moving to Detroit where he spent the rest of his career. He was the lead broadcaster for the team in 1955 even when working with legendary Orioles broadcaster, Chuck Thompson. Harwell came back throughout the years, but as a visitor. In fact, in 1991 he called the last game the Orioles played at Memorial Stadium while there with the Tigers. Everyone thought that would also be the last game Harwell would call because he was told that season was his last season (he got his job back two years later).

The stadium had many nicknames such as the Old Grey Lady on 33rd st. and The Worlds Largest Outdoor Insane Asylum.