The oldest and perhaps most influential hunting and game conservation group in the nation, the Boone and Crockett Club is located in the historic Old Milwaukee Depot of Missoula, Montana. The building was constructed in 1910 for the Chicago, Milwaukee and St. Paul Railway Company. The building is listed on the National Register of Historic Places. The Boone and Crockett Club purchased the building in 1992, relocating to Montana from Dumfries, Virginia the following year.

The former depot is now the headquarters of one of the leading conservation groups in the nation. 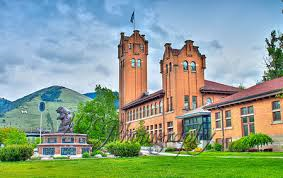 Established in 1887, the Boone and Crockett Club was founded by several important figures of the 19th century, the most notable of whom was future President Theodore Roosevelt. The group, which included General William Tecumseh Sherman, were dismayed by the rapid loss of buffalo and other wildlife taking place in the country during the 1800s as a result of western expansion, conflict with Native American tribes, and demand for animal hides (birds, fish and other animals were targets as well). They decided to form the club to bring attention to the problem. The club laid the foundation for the national conservation organizations—the National Park Service, the U.S. Fish and Wildlife Service, and the U.S. Forest Service—that would form in the coming decades.

The Boone and Crockett Club chose this historic building as its headquarters because of its longstanding importance to the city of Missoula, a city with a long history of wildlife preservation and located in the heart of the Rocky Mountains. After spending some time contemplating names, they named the headquarters building for club member George C, “Tim” Hixon and remodeled the original ticketing and waiting area of the former train station into their conference room, while keeping much of its original architecture. The former railway house is now host to a library where you can find the Permanent Collection of Books and a display of guns of historical value to the Boone and Crockett Club’s storied past.

Here at the Hixon building, the Boone and Crockett Club's staff goes to work archiving records of wild game harvests of monstrous proportions. The dedicated members of the organization keep track of record book whitetail deer harvests, some 12,000 entries to date, along with scores of just about every species of big game that are popular amongst hunters all around the world. These entries include the recorded scorings of mule deer, caribou, pronghorn, coues deer, Blacktail deer, grizzly bear, Black bear, polar bear, brown bear, elk, moose, bighorn sheep and a high magnitude of other species popular with outdoorsmen around the globe.

Sitting next to the Higgins Street Bridge and facing the waters of the Clark Fork River, the center is in a very picturesque location and is the focal point for many motorists traveling in and out of downtown Missoula. With stunning resemblance to a castle, the building has two watchtowers, built with brick imported from China, Roman style glass windows and a Spanish style roof making it one of the most iconic buildings in the most fitting state for any wildlife conservation group in America, Montana.