Built in 1925 by the Union Pacific Railroad and designed by architect Gilbert Stanley Underwood, Bryce Canyon Lodge is a great example of rustic architecture as defined by the National Park Service (NPS). The NPS used this style for railroads and lodges for many of its buildings throughout the country. The Union Pacific built the lodge to encourage tourism to Bryce Canyon National Park, the Grand Canyon, and Zion National Park. Additional "deluxe" cabins were built in 1927. The lodge was listed on the National Register of Historic Places and declared a National Historic Landmark in 1987.

Bryce Canyon Lodge was built in 1925 and is a National Historic Landmark.

These cabins were built a couple of years after the lodge. 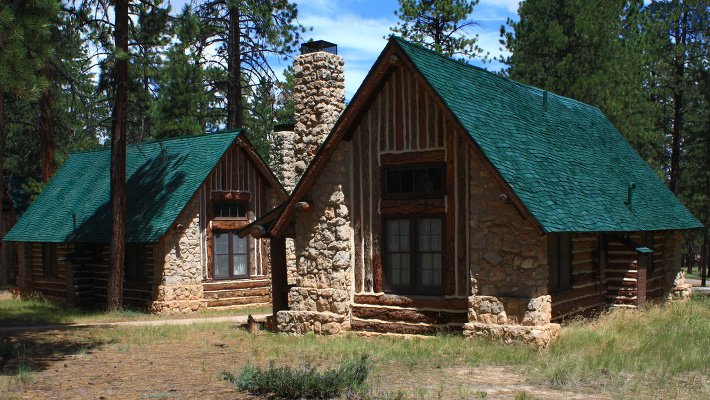 The rustic looking building is a two-story Lodge built on a stone base with over-sized log framing. The main portion of the building was built in 1924 and the north and southeast wings were built in 1926. The lodge has a long porch on the front and has a steeply-pitched shingled roof with clipped gables and shed dormers. The main floor has the lobby, dining room, a small auditorium, gift shop, kitchen and administrative and utility space.