Construction of this monument began in 1881 to honor the victory by the American and French troops over the British empire at this location a century prior. American forces commanded by George Washington worked in coordination with the French navy to surround British forces at Yorktown who were commanded by Lord Charles Cornwallis. The siege began on September 27, 1781, and ended on October 3rd with the British surrender to the French and American troops. With the surrender of Cornwallis, the British Empire decided to grant independence to thirteen of their former colonies leading to the formation of the United States of America. 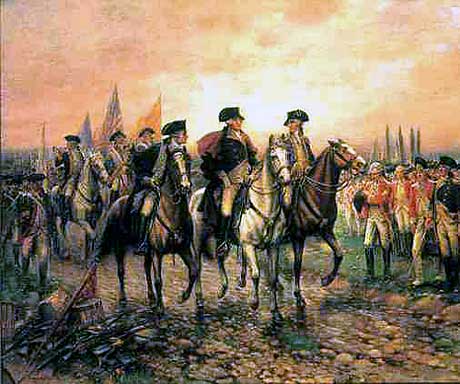 The Battle of Yorktown was the battle that effectively ended the American Revolution that had started in 1775. The beginning of the siege began on September 28, 1781. George Washington was in command of over 19,000 American and French troops that surrounded and laid siege to an estimated force of 6,000 British troops that were awaiting reinforcements by sea.

General Washington and Rochambeau were able to deceive General Clinton feinting an attack on New York. Washington attacked Yorktown in coordination with the arrival of the French fleet of Admiral De Grasse. The Allied armies were deployed in a half circle, the French on the left and the Americans on the right. On October 6th the Allied armies started a conventional siege. By Oct. 8th the siege cannons were ready to fire. The French had the honor of firing the first round and Washington fired the Americans first round. The siege cannons were able to drive away or sink the British ships in the port and to almost silence the British artillery.

The turning point of the battle was the taking of the last two British redoubts. Lieutenant Colonel Alexander Hamilton with 400 men attacked one of the British artillery placements and a force of 400 French attacked the other one. After the capture of those redoubts the Allied forces were able to fire directly into Yorktown. The British launched an unsuccessful sortie to retake the artillery placements. On October 18th after the Allies bombardment from the second parallel line, the British call for terms at 9am. At 2pm on October 19th the British and German troops march out of Yorktown, there was an official surrender ceremony that took place in which Cornwallis did not take part in. His second in command, General Charles O’Hara, took Cornwallis’ place, and carried Cornwallis’ sword to the ceremony.