Blount Mansion, built beginning in 1792, is Knoxville’s only National Historic Landmark. The house initially belonged to William Blount, once governor of the Southwest Territory and later one of Tennessee’s first state senators. It earned its nickname, “the house with many eyes,” after Native American visitors noted its many windows. The house continued to serve as the center of political action in Tennessee for many years. Following Blount’s death in 1800, various owners added to the house. Eventually, the mansion was used for slum housing and was slated for demolition in the 1920s, though local efforts to save it were successful. Since becoming a museum in 1930, preservationists have worked to restore the home to its original appearance. 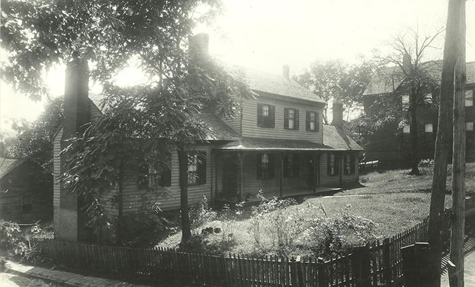 The Governor's Office in Blount Mansion, courtesy of official website. 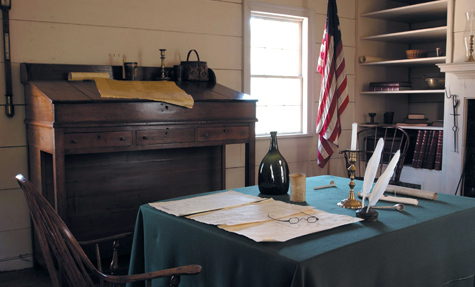 The Blount Mansion is a Registered National Historic Landmark. Marker photo courtesy of the official website. 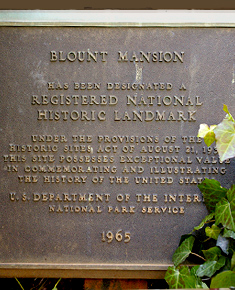 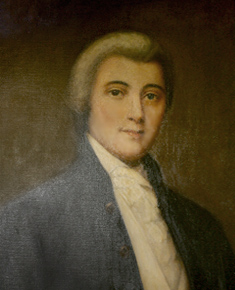 William Blount was a signer of the U.S. Constitution as a delegate from North Carolina. He moved to Knoxville after being appointed the governor of the Southwest Territory by President George Washington. He chose the site for his future home after signing the Treaty of Holston nearby. Blount’s home, considered a mansion because of its size relative to those around it, became the capital of the territory. Here, Blount entertained politicians, businessmen, and French nobles, including the future “Citizen King” Louis Philippe. The constitution for the state of Tennessee was also drawn up here while Blount was still governor. Blount later became one of the state’s first two senators, but his career ended when he was caught in a plot to war with Spain so that Great Britain could take over the Louisiana Territory. He was removed from office but managed to avoid going to trial for treason. William Blount died in 1800.

Work on the house began in 1792 and ended in 1796, though the last main phase of construction was not completed until 1830. William Blount’s wife Mary insisted that the structure be “a proper wooden house” as opposed to the log homes more common in the area. Lumber and nails for the project were brought from North Carolina, and glass came from Richmond, Virginia. Once completed, the house comprised of a hall, parlor, two downstairs rooms, and a half-story loft. The family could entertain in the hall, while the parlor and other rooms were kept private.

After Blount’s death, the house was inherited by extended family and was later sold to other prominent Knoxvillians. These owners made changes such as adding a second floor, an attached kitchen, and a front porch. One addition, the west wing, was probably constructed after 1810. It appears to have been an outbuilding that was simply moved next to the mansion’s wall. The space might have been slave quarters according to some archaeological findings. The east wing, on the other hand, was built sometime before 1820.

Another owner of Blount Mansion was Knoxville Mayor Samuel Beckett Boyd. For a part of 1863, Boyd’s cousin and Confederate spy Belle Boyd stayed here. Despite the home’s history, it was doomed to demolition in 1925 to make way for a parking lot. However, local efforts led to its preservation and the founding of a preservation movement in town. The Bonny Kate Chapter of the Daughters of the American Revolution then purchased the home in 1926 and chartered the Blount Mansion Association (BMA). The BMA later removed the front porch, which was not original to the home, and opened the house as a museum in 1930.

A recent archaeological investigation confirmed that Blount Mansion had arrived at its final form after six phases of construction. Some of these later additions have been dismantled, while some structures, like the kitchen and the Governor’s Office, have been recreated.