In 2005, the owners of the Montreal Expos sold the team to a new ownership group who brought the Major League franchise to the nation's capital. Although many long-time baseball fans hoped the team would be named in honor of the Senators, Washington's former Major League team, the owners renamed the team the Washington Nationals. This modern stadium has a capacity of 41,546. It is south of the Capital Building and is almost directly beside the Navy Yard. Walking throughout the ballpark, fans will have beautiful views of previously mentioned areas as well as the Washington Monument as a great view of the riverfront. The ballpark officially opened up on March 30, 2008 and cost over $600 million. This ballpark achieved a goal to become the first ballpark in the U.S. to be accredited as a Leadership in Energy and Environmental Design. 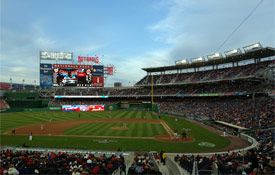 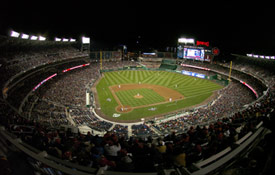 After the Expos were relocated to Washington and renamed the Nationals under new ownership, it was the first time America's past time was played in our Nation's capital in  34 years. The Washington Senators left for Texas which left the city without a baseball franchise. However now the Nationals are considered a playoff and World Series contender year in and year out after some disappointing seasons in the beginning. After back to back 100+ loss seasons in 2008 and 2009, the National's roster acquired big named in Bryce Harper and Stephen Strasburg. Washington has won the National League East since their return to Washington, in the years of 2012 and 2014.

The surrounding area of the ballpark is beautiful, whether it be the sights of the Anacostia RIver, monuments on the National Mall, or stores and restaurants. Parking and traveling to and from the stadium isn't as difficult or strenuous to the outsider of Washington D.C as you might expect. If an individual chose to drive by car there are more than 10 parking garages set aside for stadium parking as well as parking lots through the ball park or third party services. The residents of Washington D.C also navigate the city on the subway system or what they consider the Metro which has direct stop at the ballpark leading into and entrance on the outfield gates.

The atmosphere of the games are something of this world. Being surrounded by individuals that were fans of the Expos and found their new roots in this city, or young fans of the Nationals, it is always a new experience. The architecture of the stadium is different than most around the country. Designers chose to make it appear more modern and professional by using steel instead of concrete for design. One of the most interesting things aside from the beautiful game of baseball is the run that the presidential mascots do in the 4th inning. This is something only the Nationals do and it definitely a can't miss sight which will surely bring laughs and tears to your face.